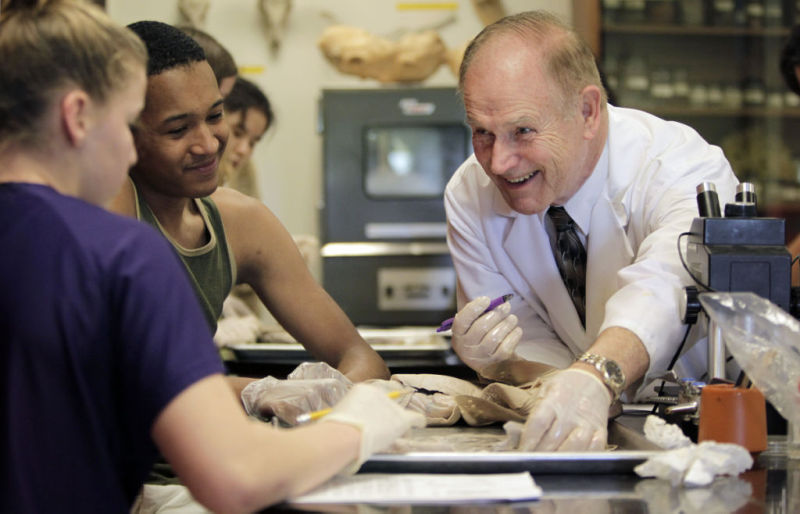 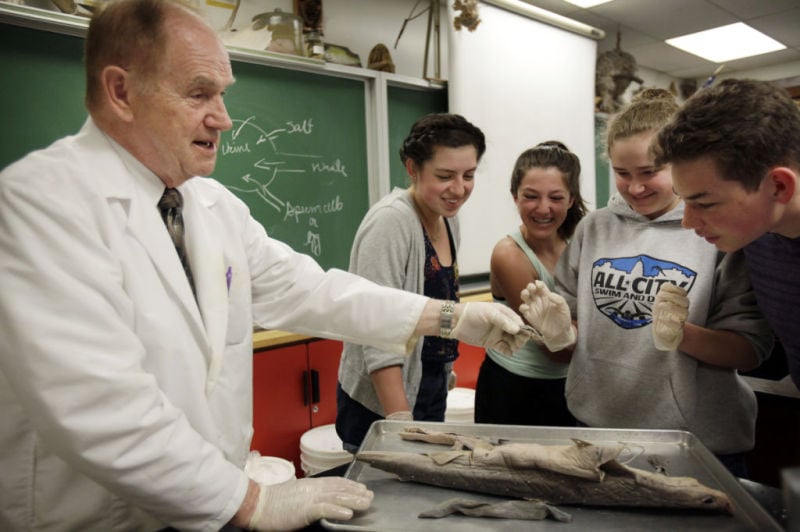 Madison East High School biology teacher Paul du Vair shows his students a small, partially digested fish found in the stomach of a shark during a dissection in his classroom at East High. 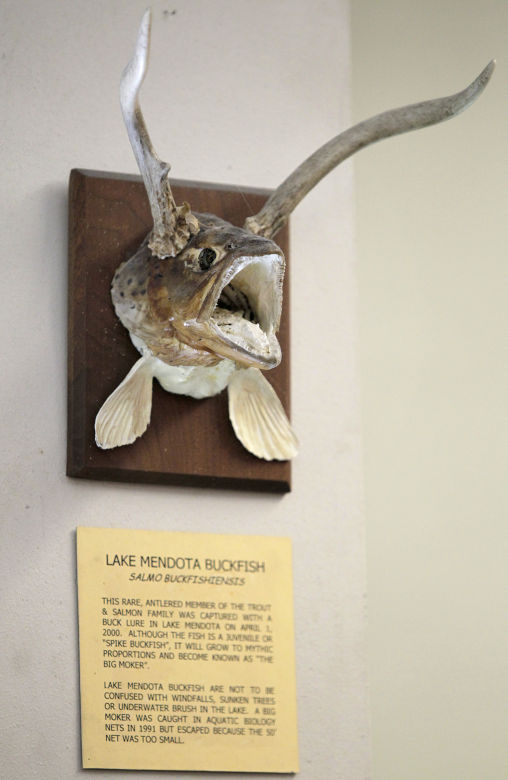 One of Madison East High School biology teacher Paul du Vair's creations, a "Lake Mendota buckfish" hangs on the wall in his classroom. 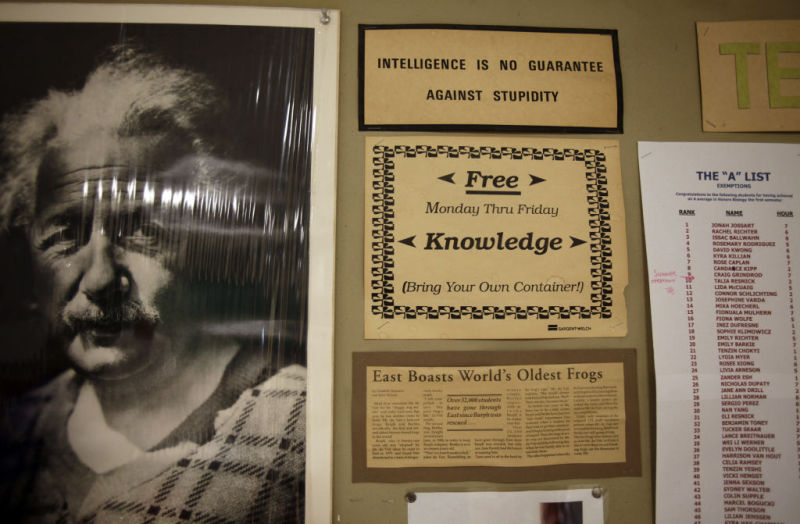 Signs, posters and news clippings hang on a bulletin board in the classroom of Madison East High School biology teacher Paul du Vair. 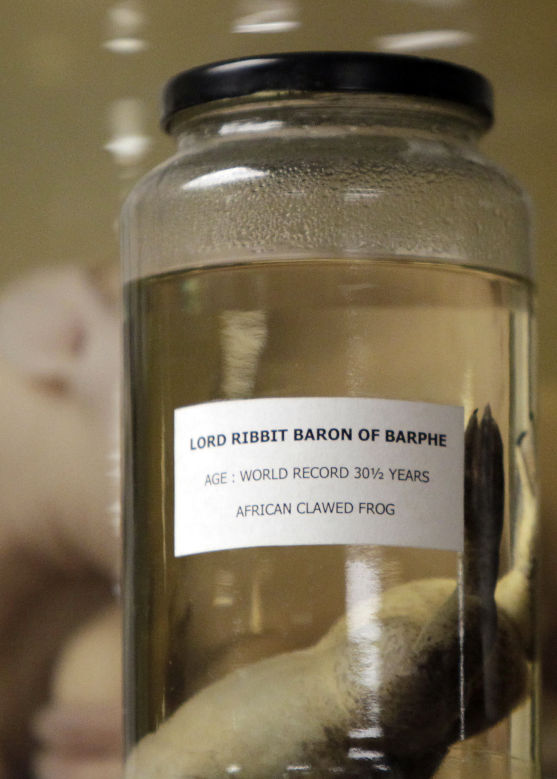 The body of "Lord Ribbit Baron of Barphe," an African clawed frog that Madison East High School biology teacher Paul du Vair raised for more than 30 years, sits in a jar on a shelf in du Vair's classroom in Madison. 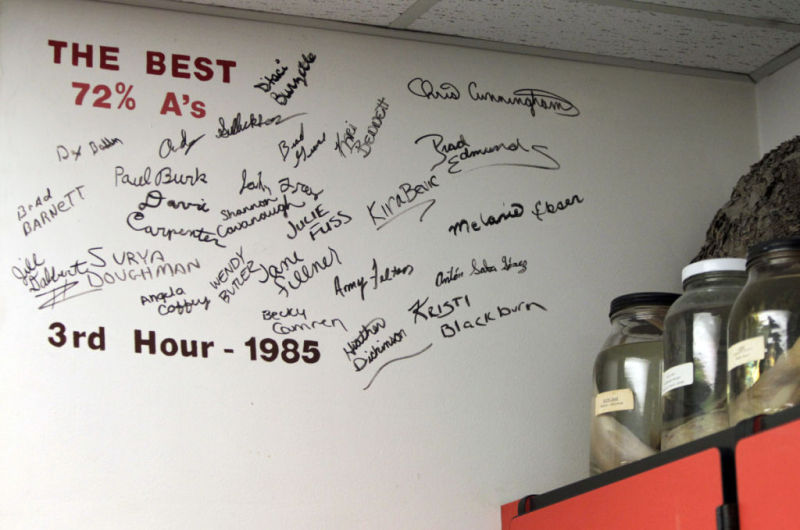 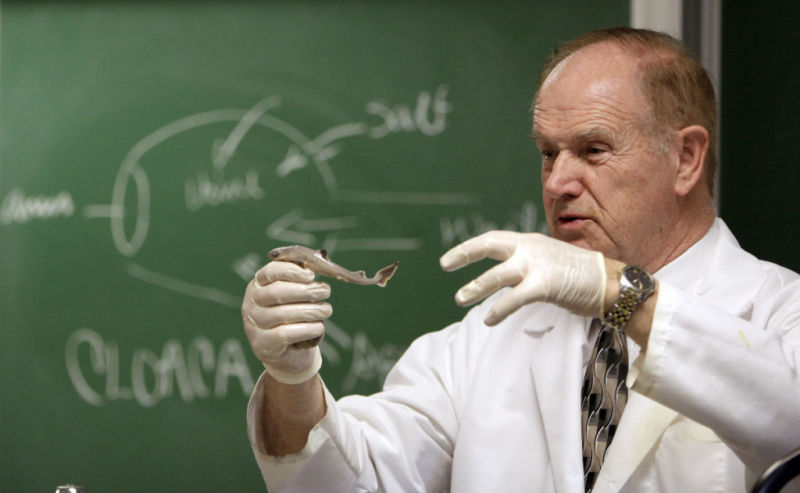 Classroom 3027 in the northeast corner of Madison East High School’s third floor looks — and smells — like a biology textbook come to life.

Schools of mounted fish and five tanks worth of swimming ones watch the classroom from their perches. Small turtles to giant tortoise shells hang on one wall. A reindeer hoof hangs on another.

Underneath the wall decorations, filling shelves and bookcases, are about 400 small jars with yellowing labels tapped out on a typewriter: “cat uterus,” “elegant spider,” “human ovaries” and “golden hamster.” There are human brains, a kidney and a cancerous uterus preserved in formaldehyde.

Also among them is the preserved “Lord Ribbit Baron of Barphe” — the African-clawed frog that lived for 30 years in the classroom, unsurprisingly named by high school freshmen.

To Paul du Vair, the collection is a scrapbook of a teaching career he leaves at 76 years old, an age possibly unmatched by any Madison teacher before him, when he retires this month after more than 50 years, including 34 at East.

“To be in school for that long, dealing with that many kids ... you’ve got to be some kind of person to teach that long,” said Lucy Jackson, 14, as she dissected a dogfish shark in du Vair’s sixth-hour class.

For context, the average teacher retires at age 60 after 21 years, according to Madison Teachers Inc.

Du Vair was born in France, the son of a college professor and a social worker. He lived there and in Switzerland and Canada before moving to Madison when he was a teenager, graduating from Edgewood High School. There he met “the best decision he ever made,” his late wife Marcia. He has two daughters.

“Biology was in me ever since I was a little boy. It was always there,” he said. “In high school, I had my own lab at home in the basement. Sometimes I scared the devil out of my mother.”

Du Vair’s career is as storied as his current students imagine it. Some don’t believe he’s been teaching longer than their parents have been alive. Its beginning is marked by the assassination of President John F. Kennedy when he taught in Reedsburg.

“I learned more about freshmen in high school, about 14-year-old kids, on that day than ever before or since — their behavior when confronted with a crisis like that,” he said.

Du Vair stuck with high school freshmen throughout his career, racking up dozens of local and national awards for his teaching, including his favorite: “Best Teacher in the World,” given by his students in 1982.

He has taught all levels of freshman biology and created the popular, award-winning summer aquatic biology course. It will cease when du Vair retires.

The rigorous course accepted students by lottery, and was taught mostly from Lake Mendota or Six Mile Creek. On two occasions, the students uncovered poisonous spills in the creek that killed thousands of fish.

Shadayra Kilfoy-Flores, a network administrator, said she and her sisters enrolled in du Vair’s classes in the late 1980s and early 1990s. Each pursued careers in science. One sister is a cancer researcher at the University of Chicago; the other is an engineer for Boeing.

Kilfoy-Flores said that’s only because of du Vair.

“I think part of what makes him so amazing and so different from most teachers is the really high standards that he sets,” she said. “He has really high expectations, but he also is extremely clear about those expectations. He gives students a very good sense of self-confidence.”

“I wish I could say all of my students thought I was the greatest thing on two feet, but that’s not the case,” du Vair said. “When you have 7,227 kids (and) I will do anything there is to get them to succeed, you make some enemies along the way. But I hope when they grow up, they will realize the reason I was pushing was for their benefit.”

Kilfoy-Flores’ daughter also recently took du Vair’s class — and is one of three generations of students that du Vair has taught since the early 1960s. The change in students during that time is like “night and day,” he said.

Students now are freer with expressing their emotions, and have no problem telling teachers what they think. That change has made teacher-student interaction more “satisfying,” he said. The most significant change, he said, is work ethic.

“The big shift was when more and more of our families were forced to have both the mother and the father work,” he said. “Then you had latch-key kids. Kids with no supervision, no one to say, ‘Sit down and do your homework.’ ”

When du Vair came to the Madison School District in 1964, teaching at West Junior High School, he said the students’ demographics were pretty homogeneous.

When demographics started to change, “it changed what we were doing all of a sudden,” he said. “We had to pay attention to poverty and what poverty entails. We became less of teachers and more teacher, social worker, mother and father all wrapped into one.”

He said the “greatest failure in education” is the lack of classroom experience of professors training teachers.

Even after a half-century of teaching, he said, he does not know how to reach students who come from crime-ridden, impoverished neighborhoods.

Some things haven’t changed. Du Vair’s “infamous” research essay questions are remarkably similar to ones Kilfoy-Flores remembers 25 years ago. And du Vair still wears a suit and tie daily, out of respect for the profession, he said, and because he believes students “won’t mess around with a man in a suit.”

He left teaching to serve as president of the Wisconsin Education Association Council, the state teachers’ union, in the late 1970s, but later returned to the classroom. Morris Andrews, former WEAC executive director, said a president’s return to teaching is unique, but fitting for du Vair.

Du Vair is one of the founders of WEAC. He said teachers needed a voice in the workplace and job security, and the way to achieve that was to endorse political candidates that supported “the rights of teachers and the needs of children,” he said.

In his last speech as president of WEAC, he urged the union to endorse any candidate that fit those needs — regardless of party.

“I said, ‘Don’t get stuck in one political party,’ and we did,” he said. “And what happened? The other side said, ‘Now we’re going to get you.’ And they did. They got us.”

“All that work and now we have to start over again,” he said of building the union. “We didn’t do it right. We should have stayed more to the center.”

While he says the landscape of education has turned on its head because of the law, that’s not why du Vair is retiring.

“One of the unusual things about the politics of education is when I close that door, all (that) is on the outside and it’s just me and the kids,” he said. “And I love it. I love teaching. And I will miss it.”

Morris Andrews, who spent two decades fighting for teacher's union rights as head of the Wisconsin Education Association Council, is remembered by family members as a devoted husband, dedicated father and passionate coach.

Madison East High School biology teacher Paul du Vair shows his students a small, partially digested fish found in the stomach of a shark during a dissection in his classroom at East High.

One of Madison East High School biology teacher Paul du Vair's creations, a "Lake Mendota buckfish" hangs on the wall in his classroom.

Signs, posters and news clippings hang on a bulletin board in the classroom of Madison East High School biology teacher Paul du Vair.

The body of "Lord Ribbit Baron of Barphe," an African clawed frog that Madison East High School biology teacher Paul du Vair raised for more than 30 years, sits in a jar on a shelf in du Vair's classroom in Madison.