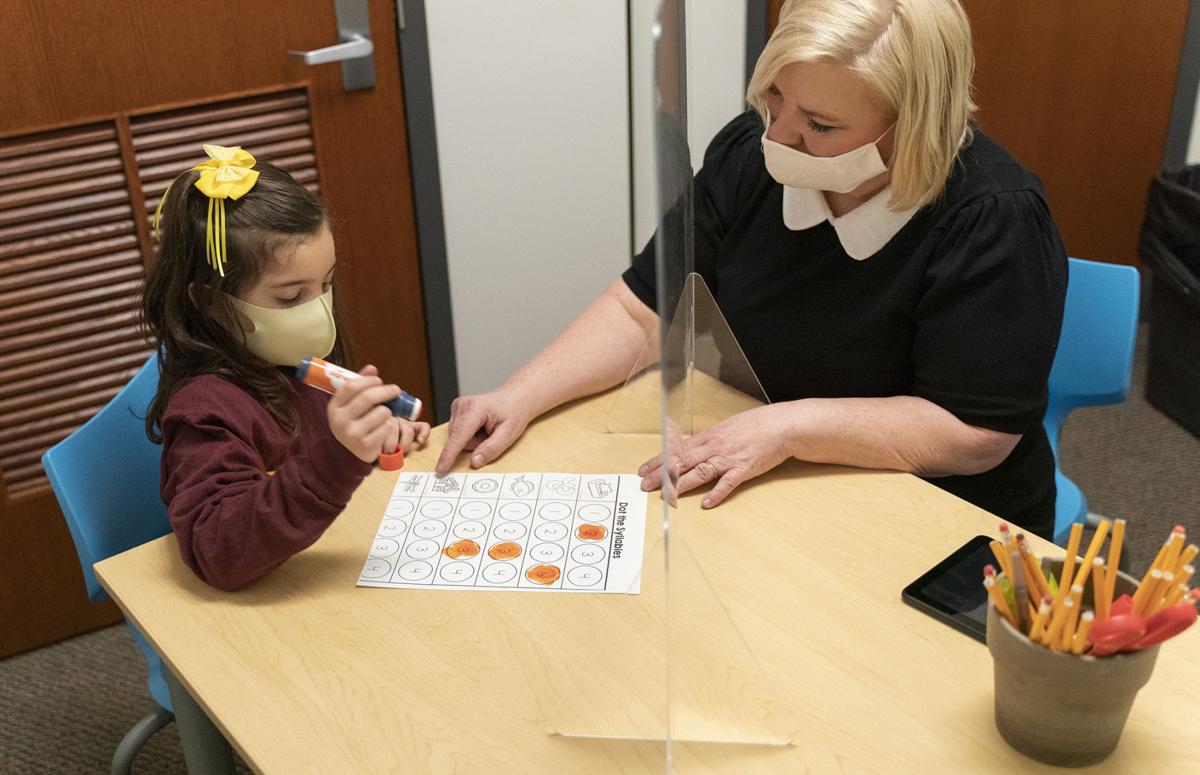 Edgewood Campus School kindergartner Madeline Michael works with teacher Kim VanBrocklin on a literacy skill. VanBrocklin is working with the Massachusetts Institute of Technology and other schools on an app to detect dyslexia and assess reading readiness. 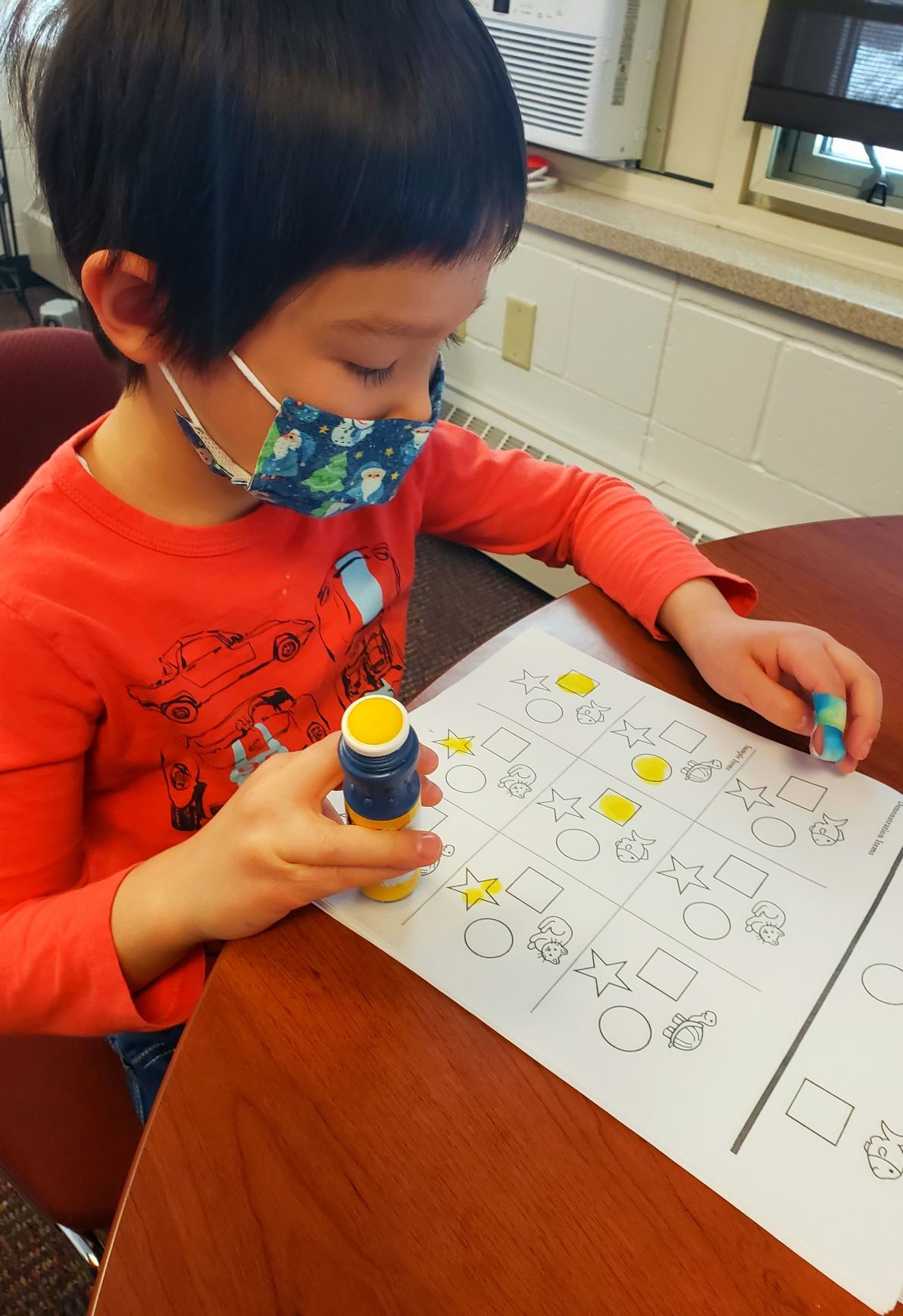 Alex Shaliastovich, a kindergartner at Edgewood Campus School, completes a cognitive test involving coding of animals to assess school readiness as part of the piloting of an app called Application for Readiness in Schools and Learning Evaluation, or APPRISE. 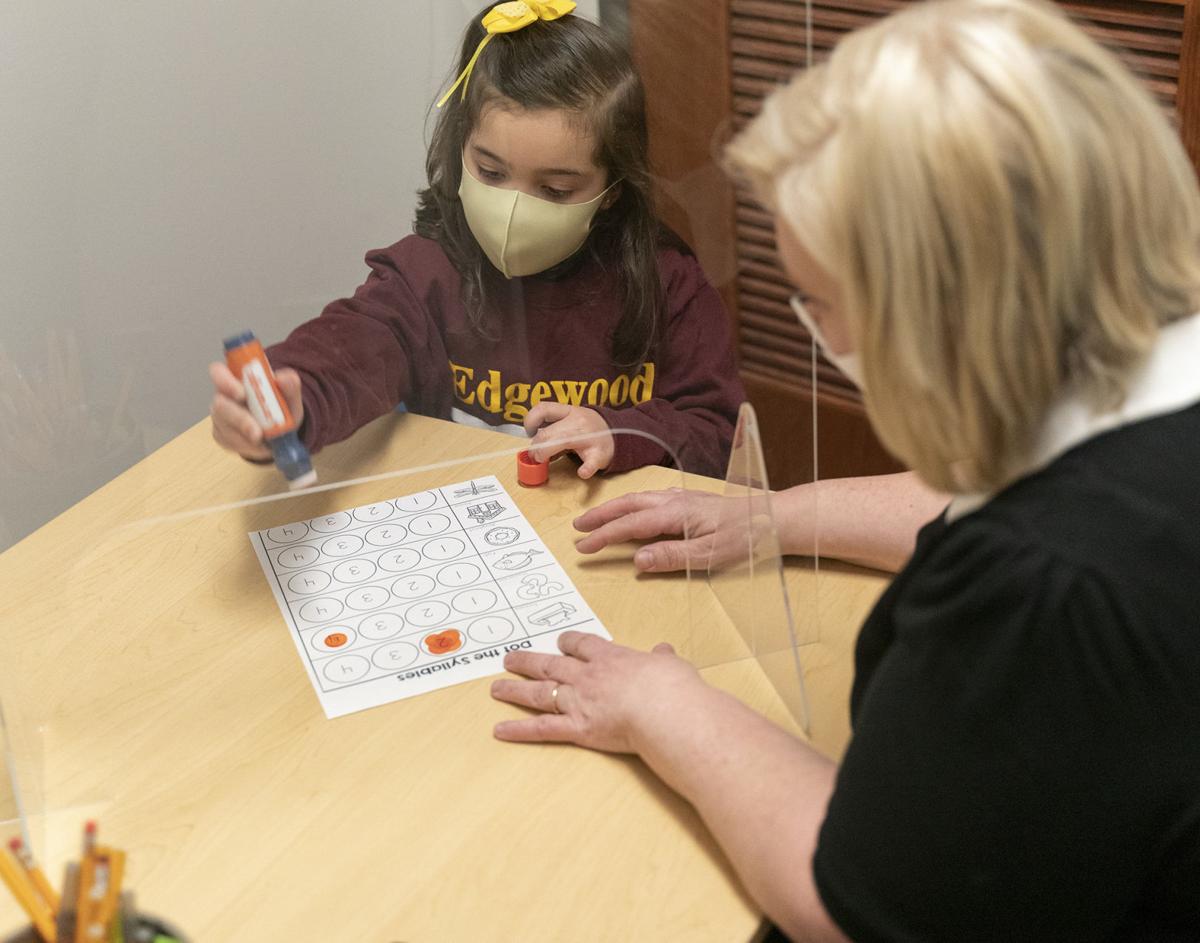 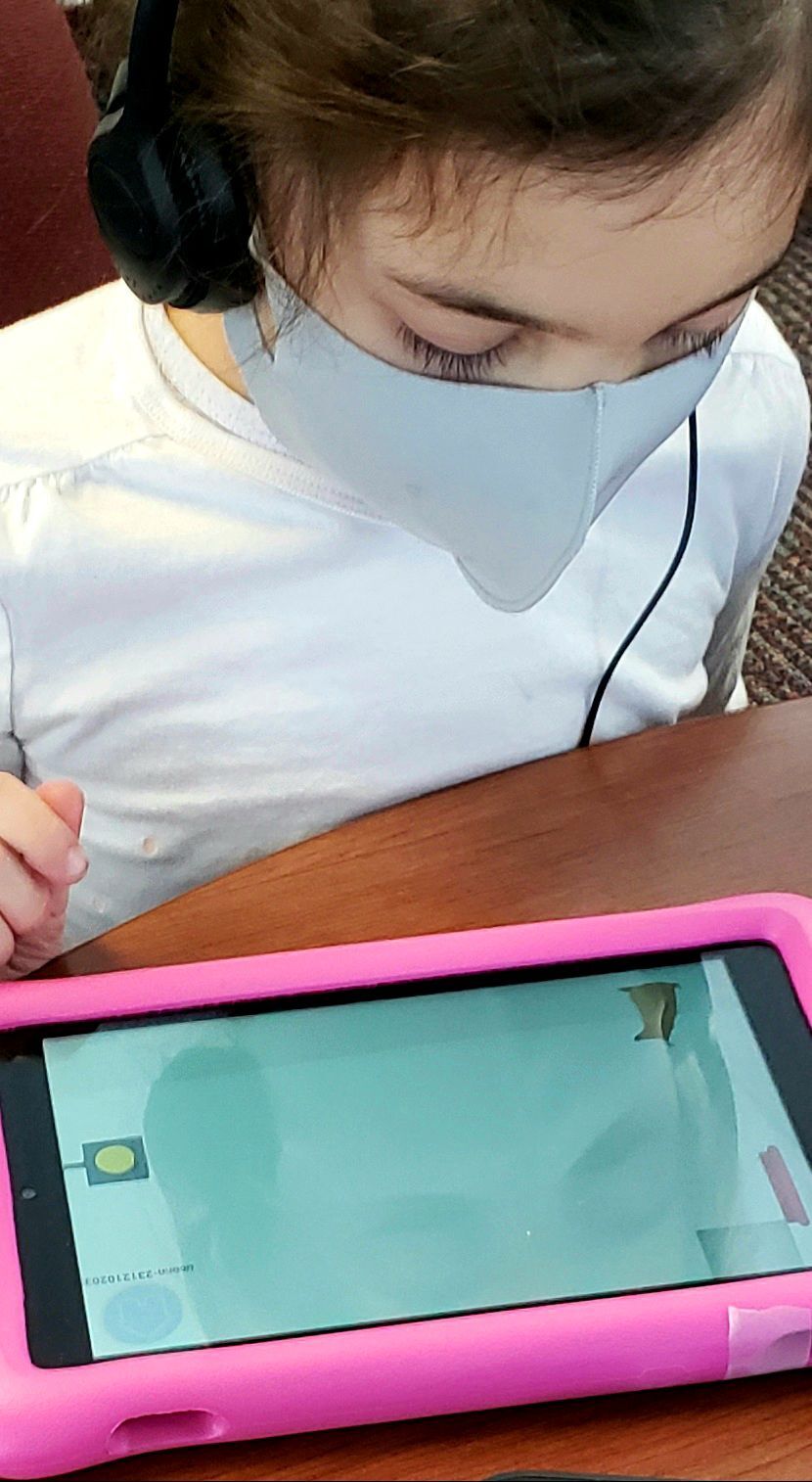 Kindergartner Madeline Michael plays a game on the APPRISE app.

Kindergarten teacher Kim VanBrocklin is fascinated with the brain.

VanBrocklin has been using brain-based learning initiatives in her teaching for nearly two decades and has always valued studies in how neurocognition and brain plasticity can benefit early learners. So when she got a chance to evaluate her students’ abilities with a reading research app, she jumped at the chance.

“Over so many years of teaching I’ve seen themes come and go,” said VanBrocklin, a teacher at Edgewood Campus School. “But the brain is the brain, and when I’ve seen functional MRI scans of how blood flows in regions that are attending, remembering or even struggling, it is fascinating to see how learners are wired.”

By knowing more, VanBrocklin said, she can tailor her instruction.

“I can really optimize what we are doing in the classroom. You just have the short window of nine months to maximize (students’) opportunity for growth,” VanBrocklin said. “Brain-based teaching involves the creation of a classroom that enhances how a child receives, processes and outputs information.”

VanBrocklin is partnering with the Massachusetts Institute of Technology on an app using games to detect red flags for dyslexia and assess reading readiness in children ages 4 to 8 through an accessible and scalable method. The goal is to eventually make the app available worldwide at no cost.

As part of the project, enough Kindles for each student were shipped to VanBrocklin. Then while her students played cognitive and research-based literacy games on the Kindles, researchers Katie Gelsomini, Kristen Johnson and Ruby Vu collaborated with VanBrocklin and her kindergartners during individual Zoom sessions.

The app is called Application for Readiness in Schools and Learning Evaluation, or APPRISE. The screener evaluates response time, working memory, processing speed, executive functioning skills, sound-segmentation and alphabetic recognition through child-centered games. As soon as the games are completed, data is sent in real time to statisticians at MIT. Parents receive information about their child’s performance, and data points can be used by educators to tailor interventions or programming initiatives.

Educators can get more information about taking part in the study at www.appriseproject.org.

VanBrocklin said all the parents of students in her classroom agreed to have their children involved.

Laura Spencer, whose son Jackson is a student of VanBrocklin, said literacy is so important for a child’s development, whether they are really excelling at it or there are areas where they need to improve.

“It is a milestone that has to be met. If children aren’t able to read, it can hold them back academically in the future,” said Spencer, who has a bachelor’s degree in science for communication disorders and a doctorate in audiology.

“He loved it. He would get so excited,” Spencer said of her son’s involvement with the project.

Early intervention is so important, added Anne Palzkill, president and principal of Edgewood Campus School, who arranged for substitutes when VanBrocklin needed to be away from her classroom.

“I am a firm believer if someone has a passion ... I am going to do what I can to support them,” Palzkill said.

VanBrocklin, who is in her first year at Edgewood after teaching at Madison Country Day School for 19 years, said she appreciated Palzkill’s support, especially during the COVID-19 pandemic, which already made the school year complicated. When the tests were being run, certain protocols were used, such as clear plastic dividers and separating students.

While VanBrocklin has attended “Learning and the Brain” workshops for years, she received a Herb Kohl Fellowship for being named one of the top 100 teachers in Wisconsin and used her stipend to take summer brain-based courses at Harvard University.

VanBrocklin said she is waiting for the results for her students to come back, and 4K and first-grade teachers at Edgewood Campus School also plan to pilot the app.

“We will definitely have takeaways that we can apply for years,” she said.

Highs will hit the 50s and may crack 60 across southern Wisconsin, before falling back to the 40s late this week.

Edgewood Campus School kindergartner Madeline Michael works with teacher Kim VanBrocklin on a literacy skill. VanBrocklin is working with the Massachusetts Institute of Technology and other schools on an app to detect dyslexia and assess reading readiness.

Alex Shaliastovich, a kindergartner at Edgewood Campus School, completes a cognitive test involving coding of animals to assess school readiness as part of the piloting of an app called Application for Readiness in Schools and Learning Evaluation, or APPRISE.

Kindergartner Madeline Michael plays a game on the APPRISE app.