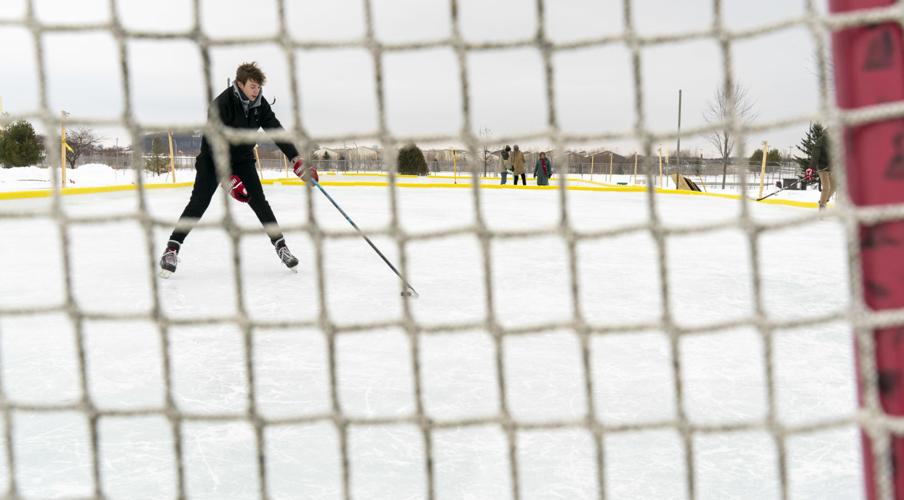 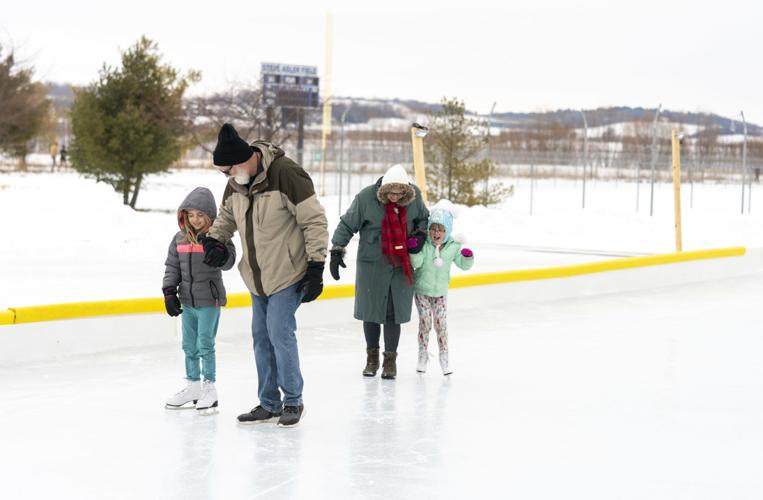 Doug and Rachele Rickels take their grandchildren -- Laurel Raeder, left, 7, and Caroline Raeder, who will be 5 on Wednesday -- skating for the very first time at a newly installed rink at Penni Klein Park in Middleton. Middleton High School hockey players created the two rinks and maintain them. The rinks are used for hockey club activities and by community members. Story Page A3 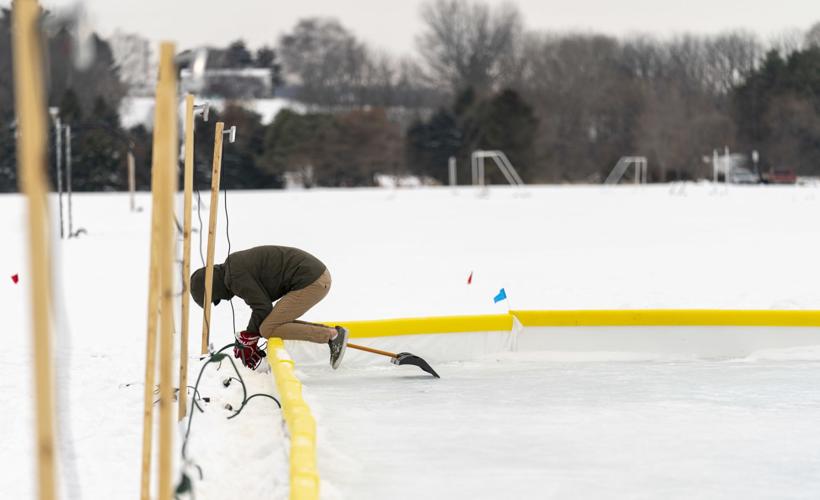 Middleton High School senior Spencer Kalscheur works on the lighting at the new rinks at Penni Klein Park. “Driving by there and seeing 50 people and a bunch of little kids, it’s a good feeling,” he said.

Faced with no high school hockey season, Middleton players found another way to skate and give community members an outlet during the pandemic.

When the Middleton High School hockey season was canceled because of COVID-19, team members decided to raise funds to build their own rink at Penni Klein Park at 8780 Airport Road on the edge of town. The members, who are playing on a club team through the Middleton Youth Hockey Association, figured it would be a way to practice and play themselves while having fun and building teamwork and camaraderie.

As the idea evolved, the players realized they could share it with the community so more people could enjoy the ice.

“Driving by there and seeing 50 people and a bunch of little kids, it’s a good feeling,” said team captain and center Spencer Kalscheur, a senior. “It was totally worth it.”

The rink also will be the site of a Super Noah hockey game Feb. 6 to raise money for the Leukemia and Lymphoma Society and bring the community together to honor Noah Sanger, 8, a boy in the community who has acute lymphoblastic leukemia, and others battling cancer.

Because of the pandemic, the Middleton players held Zoom meetings to plan the project. Then they got some help to build the rink themselves after raising $15,000 through a GoFundMe effort to purchase all of the materials. In the end, the group decided to create two smaller rinks—one is 104 feet by 52 feet, and the other is 98 feet by 52 feet.

In addition to the money raised, different entities donated time and equipment, and the players learned how to approach businesses for donations. They presented the rink idea to the Middleton Youth Hockey board and also made a presentation to the city of Middleton to get authorization for use of the park.

Not only did they put in the hours to create the rink, they continue to maintain it.

“I go over and shovel almost once a day now to keep it ready for the public,” Kalscheur said.

The players also have contended with weather factors and other issues to keep the rink in good shape. Tasks include flooding the rink and borrowing an ice mower to smooth down the bumps.

The community can use the rink for free daily before the park closes at 10 p.m.

Steve Chafe, whose sophomore son, John, is on the high school team, has been a coach and board member of the Middleton Youth Hockey Association, and another son, Andy, also played hockey. Chafe also has served in the military and works as an airline pilot — both of which have given him experience in “crew resource management,” a method to improve working relationships. He also has a consulting job teaching crew resource management.

Last year when Chafe was helping the high school team, he offered to teach those skills to players.

He started working with the team leaders more than a year ago and continued to work with them this summer on leadership development, teamwork and communication. As the pandemic progressed, it became apparent the team would not have a normal season this winter.

“I could tell the coronavirus restrictions and the fact that they might not have a normal season was weighing on their minds,” Chafe said. “I suggested they find an outlet for their energy and just give them something positive to work toward.”

Senior Sean Ruhly, assistant captain and a forward, said it has been disappointing not to play his last year of high school hockey.

“Hockey — it is a big thing for all of us. It is a way to cope with other things,” he said.

But Ruhly said he knows as a leader he needs to stay positive.

Senior Jakob Covey, who plays defense, said he likes that the rink is available to anyone no matter where they live and that someone is on the rink almost every time he drives past.

Doug and Rachele Rickels, of Middleton, took their grandchildren to the rink Friday. Former teachers, the Rickels are helping with the childrens’ online schooling.

Caroline Raeder, who will be 5 on Wednesday, earned the chance to take part in a “sporting event” because of her work with numbers. Her sister, Laurel, 7, was also on the outing.

“We drive by it every day,” Doug Rickels said of the rink. “We think this is awesome —whenever you can get people outside together.”

The fundraiser is being coordinated by Ava Jambor, a senior at Middleton High School and member of the Madison Metro Lynx hockey team, who started it to help Noah, who is now in remission. The first two years the fundraiser took place at a hockey game at the Madison Ice Arena and raised a total of about $15,000.

This year due to COVID-19 restrictions the 3rd Annual Super Noah Game will be held outside at the Penni Klein Park rinks. The game is scheduled for 2 p.m. Feb. 6, and the goal is to raise $5,000.

“The goal of the game remains the same but this year we are not only honoring him, we are celebrating Noah’s astounding accomplishment,” Jambor said.

Anyone unable to attend the game who would like to make a donation can go visit events.lls.org/wi/soymadison21/ajambor.

“Driving by there and seeing 50 people and a bunch of little kids, it’s a good feeling. It was totally worth it.”

Hockey rink is a win for community -- Cari Mitchell

My deepest gratitude to Middleton Youth Hockey and its mentors for their fantastic solution to the complications of COVID-19 in their community.

After warmup at mid-week, system could deliver snow, then much colder air for southern Wisconsin

After seeing highs near 40 at mid-week, southern Wisconsin could see snow before highs tumble to the low 20s for the weekend, according to forecasters.

Doug and Rachele Rickels take their grandchildren -- Laurel Raeder, left, 7, and Caroline Raeder, who will be 5 on Wednesday -- skating for the very first time at a newly installed rink at Penni Klein Park in Middleton. Middleton High School hockey players created the two rinks and maintain them. The rinks are used for hockey club activities and by community members. Story Page A3

Middleton High School senior Spencer Kalscheur works on the lighting at the new rinks at Penni Klein Park. “Driving by there and seeing 50 people and a bunch of little kids, it’s a good feeling,” he said.