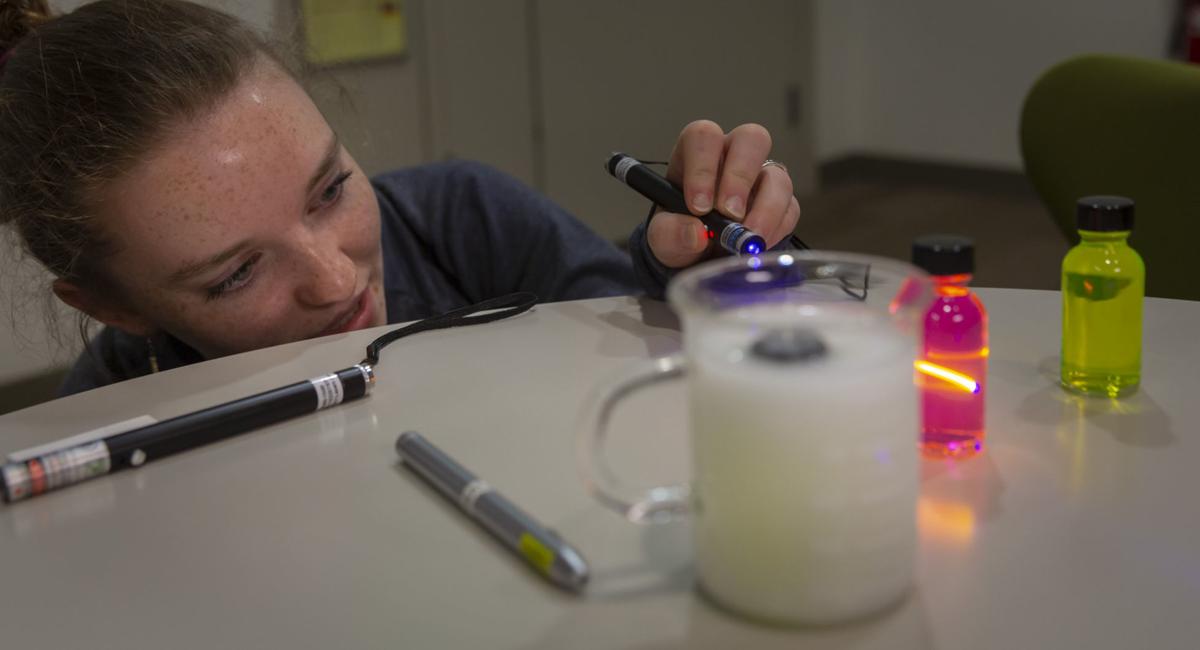 Nadia Steffan, a 10th grader at West High School, uses a colored laser pointer to shine through a substance during a field trip to the lab of a UW-Madison cancer researcher. Members of HOSA-Future Health Professionals, formerly known as Health Occupations Students of America, were learning about cancer. 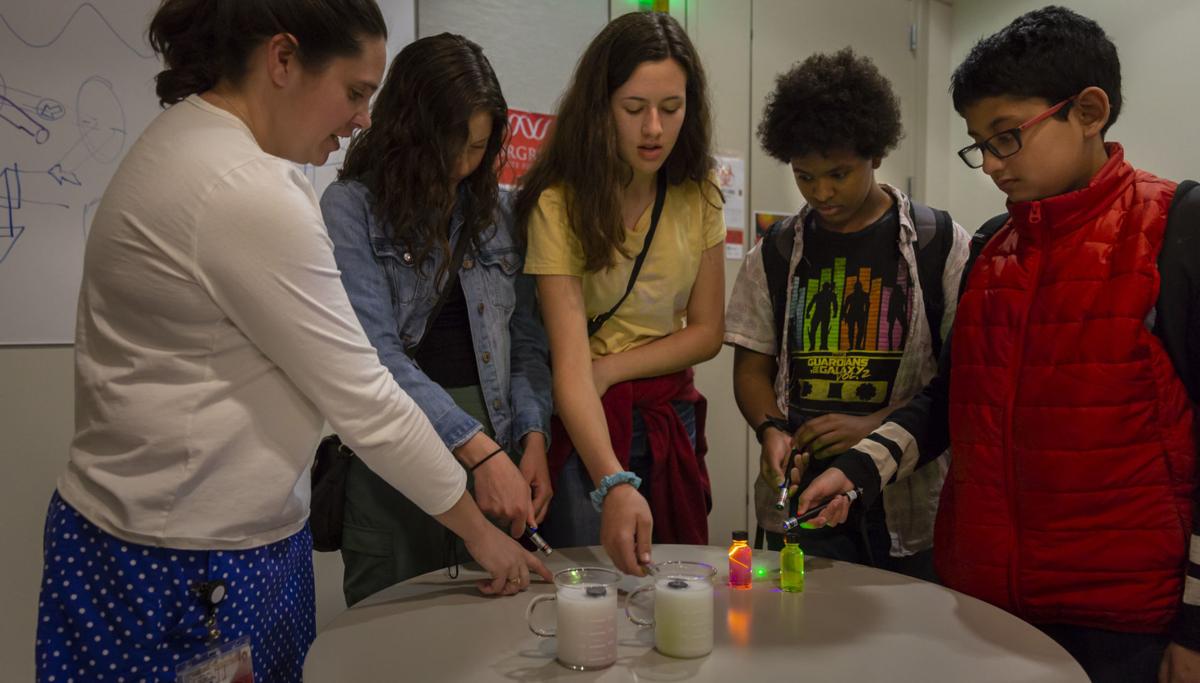 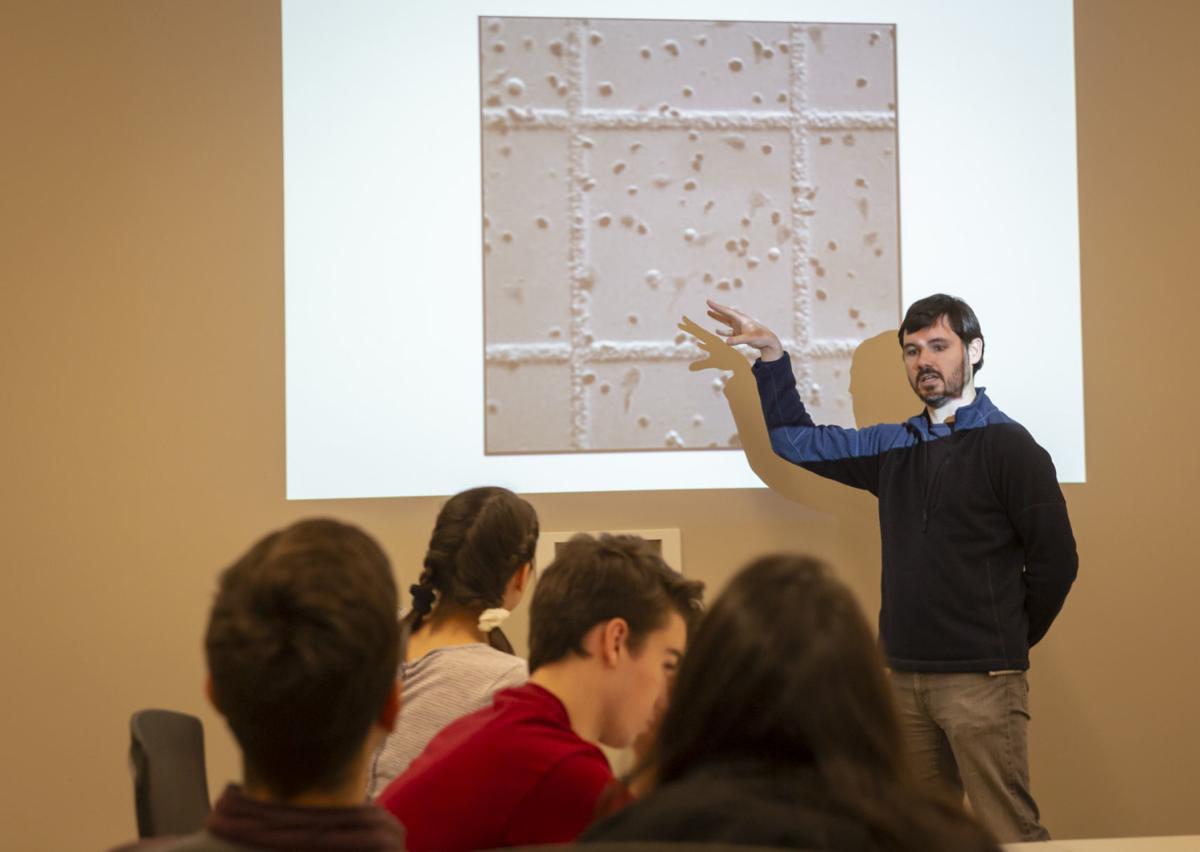 High school students in Dane County are tackling a heavy topic — pancreatic cancer — the third-leading cause of cancer deaths in Wisconsin and among the fastest-moving cancers.

The students — members of HOSA-Future Health Professionals, which was formerly called Health Occupations Students of America — have been partnering with the UW Carbone Cancer Center and the Pancreas Cancer Task Force to learn more about the disease and other medical-related topics.

“My family, specifically, I don’t believe has had any trouble with pancreatic cancer (but) I definitely comprehended the scope,” said Garrett Lyons, a junior at West who aspires to be a surgeon and attended the field trip. “It is pretty severe and also very difficult to detect.”

They also have opportunities to get help with careers and work with researchers. For example, one HOSA student went on to complete a summer research internship at Carbone after meeting a scientist through a field trip.

The spring field trip, which was organized by Carbone and the Morgridge Institute for Research, featured a visit to Melissa Skala’s lab at Morgridge and lunch with graduate students at the institute. In the afternoon, the students visited pathogen researcher Laura Knoll’s lab in the Microbial Sciences Building. Knoll is a professor of microbiology and immunology at UW-Madison.

“I’m really interested in medicine but this sort of helped me understand the science part of it,” Kendra Anderson, a seventh-grader at Hamilton, said about the field trip.

Katerina Zahed, a sophomore at West whose father was an anesthesiologist who died of pancreatic cancer, said she also has an interest in medicine. Her mother, Sofia Refetoff, pancreas cancer research coordinator at Carbone, helped organize the field trip.

Ron Niendorf, of Madison, started the Pancreas Cancer Task Force after his son-in-law, Brian Pochel, who had a chiropractor practice in Cottage Grove, died of pancreatic cancer about seven years ago after fighting it for 5½ years.

Niendorf said he told Pochel that he would do what he could “so it doesn’t happen to anybody else.” The task force raises money for research at Carbone.

“One of the other major efforts that we have on the task force is to increase the awareness of pancreatic cancer in general and what is going on at Carbone,” said Niendorf, whose wife, Ruth, also volunteers on the task force.

The task force’s involvement with HOSA is part of its outreach efforts, Niendorf said.

Maggie Rathert, who taught marketing at East and Verona high schools and has survived pancreatic cancer for 4½ years, and her husband, Loren, got involved in the task force as a way to give back. Because DECA — which prepares high school students in the areas of marketing, finance, hospitality and management — and HOSA are sister organizations, Rathert said she could see how she might get involved. Rathert has met with chapters and talked about her story, sometimes at field trips, she said.

“It is really important that (students) see a human face,” she said.

“We were moving to an outdoor classroom more so it wasn’t a huge change for us,” preschool director Karen Beck said. “Nature just benefits the children so much.”

Nadia Steffan, a 10th grader at West High School, uses a colored laser pointer to shine through a substance during a field trip to the lab of a UW-Madison cancer researcher. Members of HOSA-Future Health Professionals, formerly known as Health Occupations Students of America, were learning about cancer.