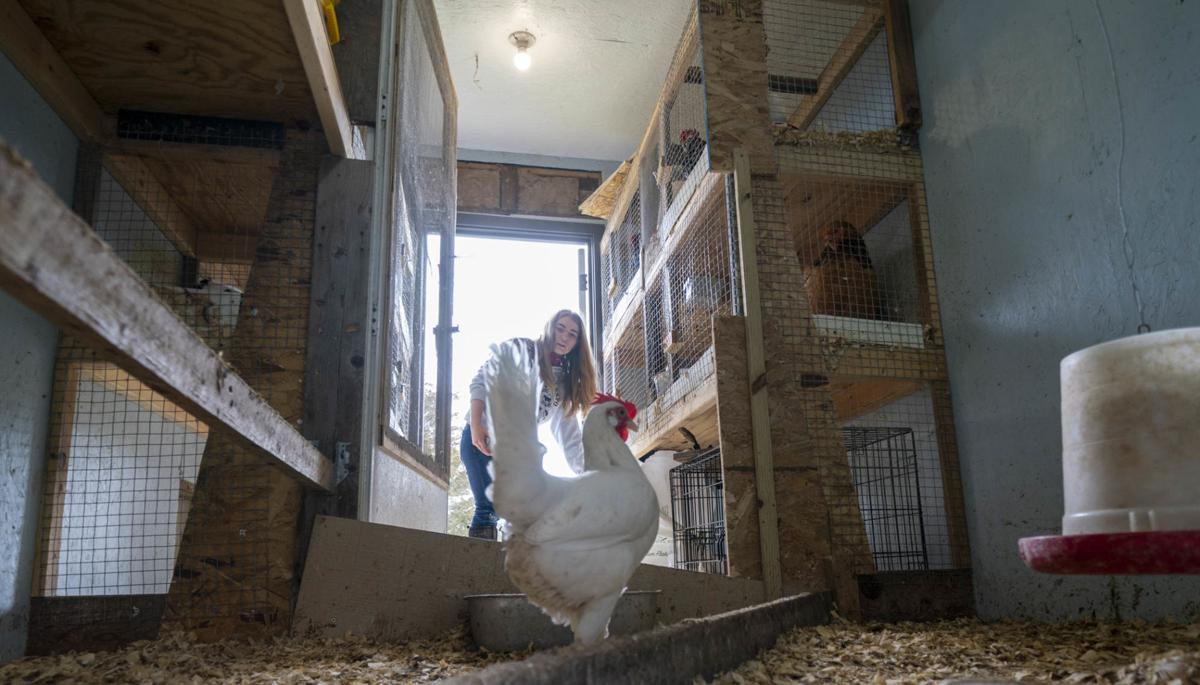 Cambridge High School senior and Future Farmers of America member Rachel Drotzer feeds her show chickens, while an egg-laying chicken makes it way into the coop at her home in Cambridge. 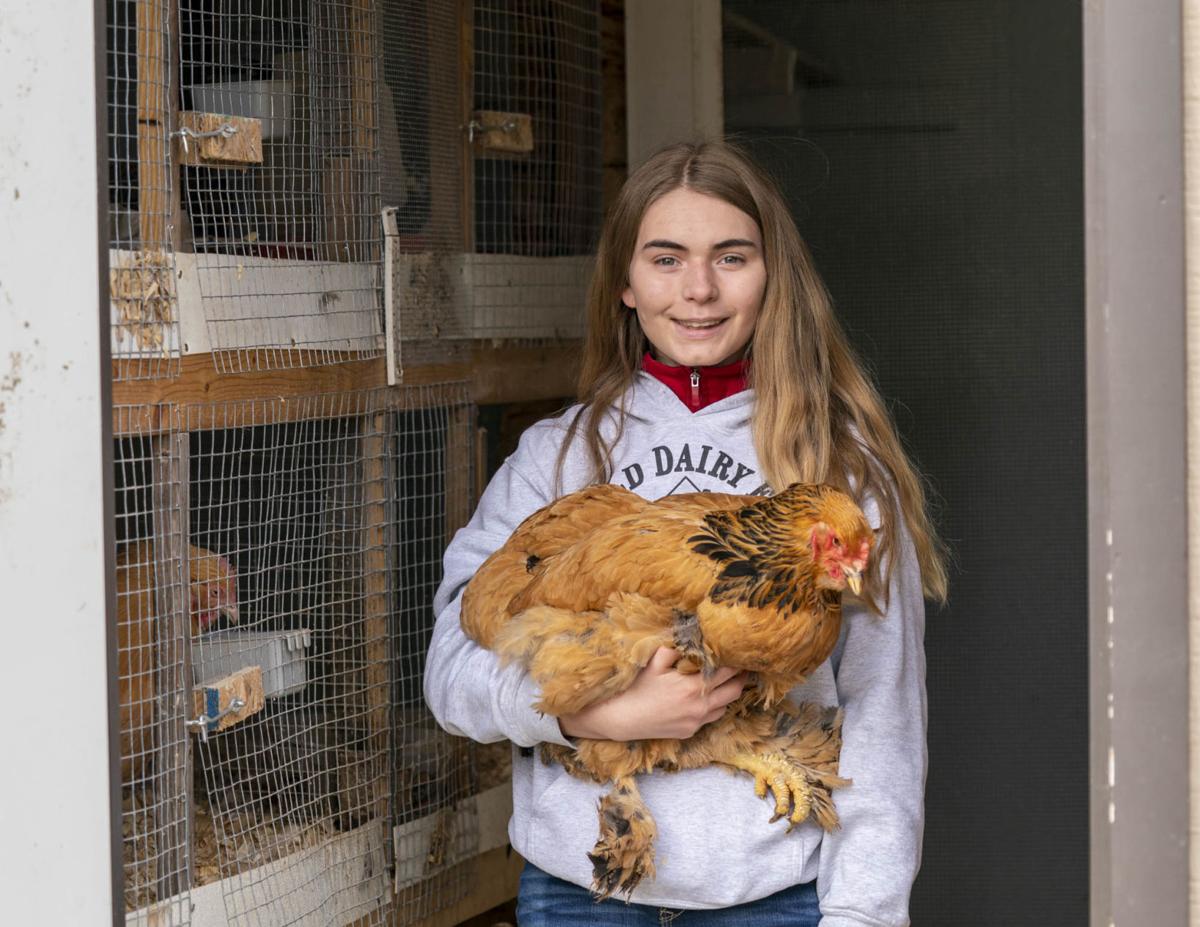 Rachel Drotzer with one of her show chickens — a Buff Brahma named Pumpkin — in the coop at her home in Cambridge. 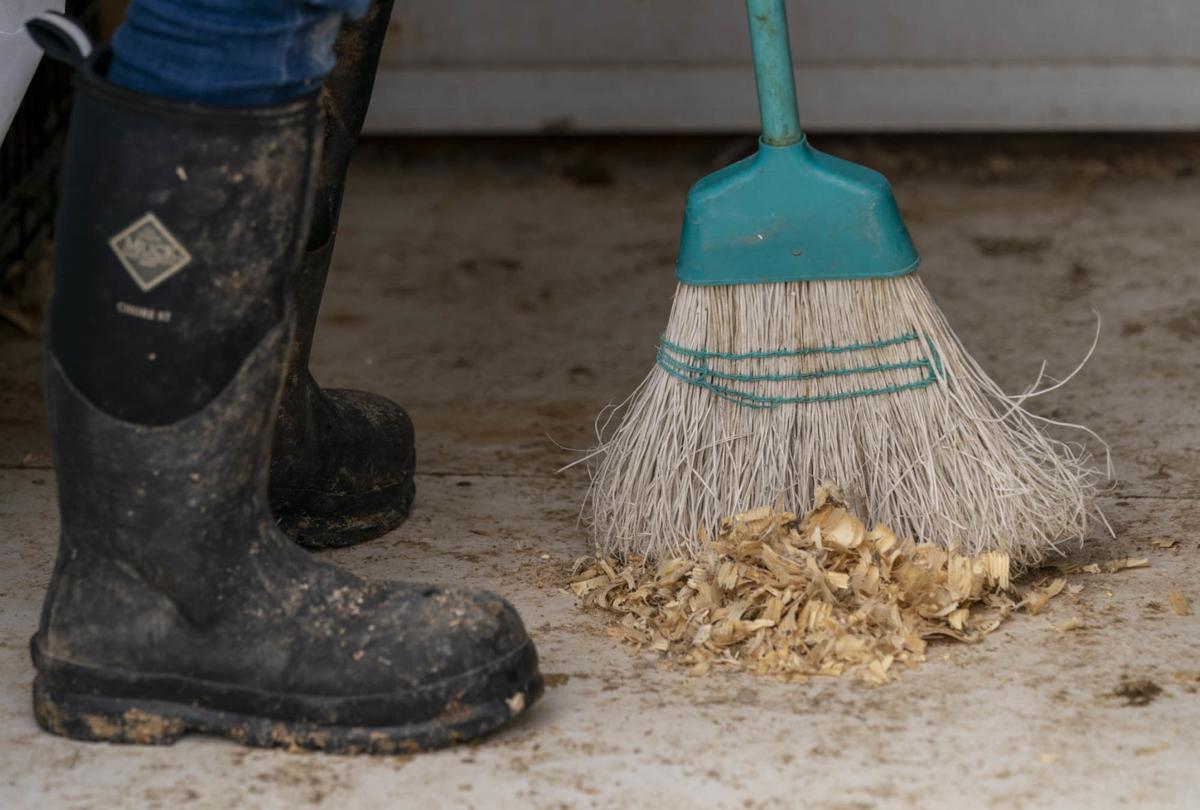 Rachel Drotzer cleans a coop at her Cambridge home.

Cambridge High School senior Rachel Drotzer has come a long way in her poultry-raising skills since the days of treating her family’s chickens like pets.

These days, Drotzer has her own flock and occasionally sells eggs. She has a coop she built with the help of her dad, Rich, and designed for her award-winning birds.

Drotzer is involved in all aspects of her birds’ care, including their health. Along the way, she learned the hard lesson that not all of them can be saved.

“She has definitely taken a huge ownership in growing her knowledge of chickens and takes a lot of initiative in checking them out (physically),” said Emily Klingbeil, agriculture teacher and Future Farmers of America adviser at Cambridge High School.

Drotzer will call the veterinarian if she sees a concern and contact adult breeders and others she knows through the Facebook groups she has joined.

“She has learned how to treat her animals, too,” Klingbeil said. “That’s definitely above (and beyond), more than the average student is going to do.”

During an online veterinary science class this past fall, a veterinarian came to Drotzer’s house to check on a chicken, which gave the rest of the class a chance to take a virtual field trip of the experience.

Drotzer is a member of of the Cambridge High School FFA, and her poultry activities qualify for her “supervised agricultural experience.” The hands-on component is an opportunity for students to put into practice what they learn in the classroom.

Some students stay with the same project throughout their FFA career, which is great because they can add something every year and grow in knowledge and experience, Klingbeil said. Others try different things, partly due to access, she said.

For Drotzer, access to chickens has never been a problem.

She was about 7 when her family got chickens, but her mom, Margie, who was raised on a farm, did most of the caretaking. Drotzer said she would play with the chickens and collect eggs. Then when she was about 8 or 9, she started showing them at fairs.

When she was about 10, she began taking on more responsibility, such as giving them water and food, cleaning their pens and locking them up at night — jobs she shared with older brother Jason. But when he lost interest, Drotzer took on more of it.

A friend who specializes in dairy encouraged her to be in 4-H and later, FFA, which Drotzer joined when she was in seventh grade and has been active in it ever since.

At first, Drotzer raised chickens from chicks she purchased from hatcheries and showed them. She said she did OK, but realized she could do better. She also borrowed friends’ chickens so she could show them.

Then in the fall of 2019, she and her mom went to a swap in Beaver Dam, and she purchased her first two show birds — a Polish bantam and a Silver Spangled Hamburg. The Polish bantam earned her a grand champion award at the Jefferson County Fair, which was held online last summer.

At another swap last year, she fell in love with some ducks and talked her mom into letting her purchase three, and that led to getting a reserve champion award for a drake at the same fair last year.

Now that Drotzer has egg layers and show birds, she has ordered meat birds that arrive May 10 and she plans to show them at the fair this year. She also shows her birds at other shows.

In the meantime, Drotzer cares for her flock with weekly checkups of their eyes and beaks and deworming in the spring and fall. She also has dealt with health issues, such as the time she had a bird that was sneezing. A veterinarian came out, and Drotzer tried treating the respiratory disease, but it didn’t completely go away. The vet said she had the choice of letting the chicken go or quarantining her for another three weeks to see if the illness would go away on its own.

Drotzer quarantined the chicken, but the sneezing never completely resolved, so she made a difficult decision to let her go. Not only would she had to be quarantined her whole life, but there was a chance that by handling the bird and her other chickens, Drotzer could pass on the disease.

“We ended up just taking one for the team,” Drotzer said.

Drotzer was recently featured on her Cambridge High School FFA Facebook page as part of the organization’s “senior FFA Member Highlight” recognition. She also received a silver proficiency award based on her supervised agricultural experience by keeping track of the hours she spends taking care of her birds, how much money she has spent, the skills she learned and what goals she set and how she accomplished them.

One of her next goals is to get roosters and an incubator so she can start breeding chickens. She wants to expand her knowledge and business opportunities.

“I want to get my name out there and perhaps go to school for poultry science,” Drotzer said. “There are so many things that go into incubating.”

“She has learned how to treat her animals, too. That’s definitely above (and beyond), more than the average student is going to do.”

Cambridge High School senior and Future Farmers of America member Rachel Drotzer feeds her show chickens, while an egg-laying chicken makes it way into the coop at her home in Cambridge.

Rachel Drotzer with one of her show chickens — a Buff Brahma named Pumpkin — in the coop at her home in Cambridge.

Rachel Drotzer cleans a coop at her Cambridge home.