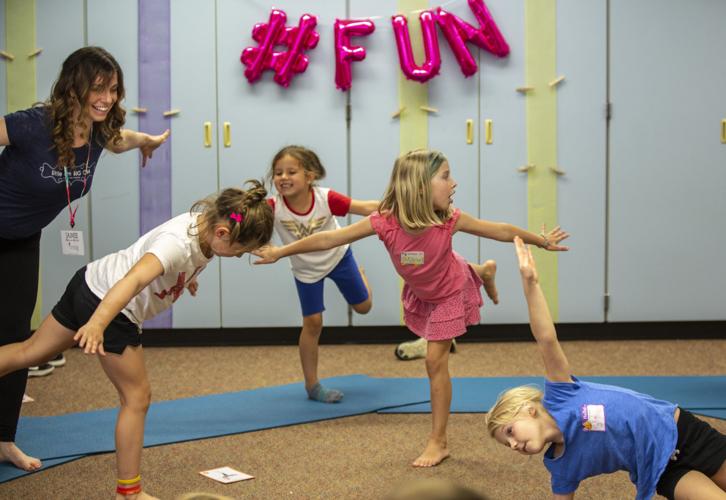 Yoga and mindfulness teacher Jamie Gale works with first- and second-graders on a game to make yoga poses during Creative Soul Camp at Sauk Trail Elementary School in Middleton. The day camp is designed to inspire children to explore their creativity. 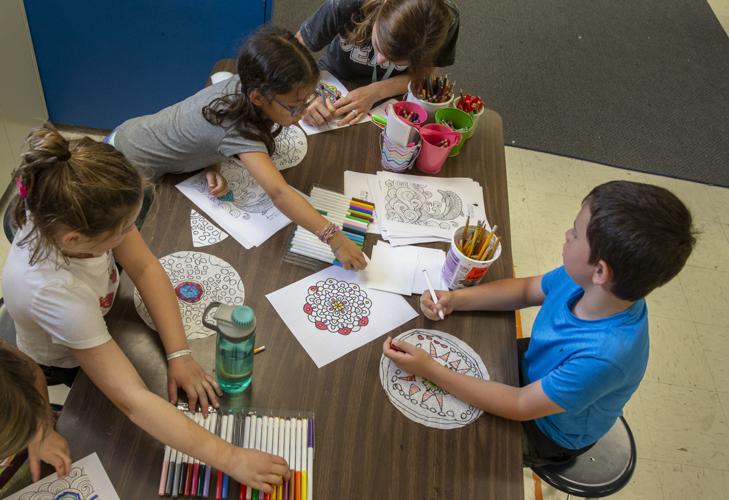 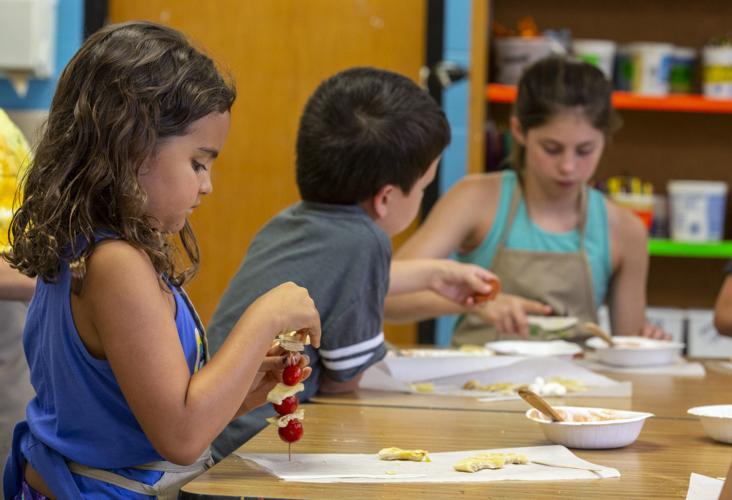 Four small business owners who like to inspire youngsters to explore their creativity have joined forces to create a day camp where no approach a camper chooses is considered “wrong.”

Creative Soul Camp offers a variety of activities to explore art, drama, yoga and culinary arts. It was started by four women who own businesses in those specialties.

“We just wanted to offer something that really wasn’t out there,” said Jamie Gale, one of the teachers and a co-director. “It seems so effortless when we are here. We are each here doing what we love to do.”

She is the owner of little om BIG OM, where she teaches yoga and mindfulness. The other partners are Tara Verma, who owns Yummy Sprout, Corissa Elder of All About The Drama and Heather Sheehan of Studio 7504. They all teach the sessions in their specialties, and Verma also is a co-director.

The camp was started last summer, and Verma said the group was just hoping it would get at least eight youngsters to participate.

“We ended up selling out the two weeks,” she said.

So two more sessions were added this year and they also sold out — increasing from 40 enrolled the first year to more than 100 enrolled over the summer this year. The group also does similar camps during winter and spring breaks.

The camp is designed for children ages 6 to 12 and takes place at different venues on the west side of Madison and in Middleton. It runs from 10:30 a.m. to 3:30 p.m. Monday through Thursday, and the campers spend about an hour daily in each specialty and break for lunch. The final session was last week at Sauk Trail Elementary School in Middleton.

The activities include working on two- and three-dimensional art projects, practicing yoga and cooking a snack for the campers to eat. The drama session covers topics such as props, costumes and the expression of emotions. The campers also develop a script for a performance that is part of a showcase event for parents at the end of camp. This year, the camps included a collaborative art project.

Gale said as campers are working on certain activities, the teachers allow individual creativity and have the attitude that whatever approach the youths choose “it’s not wrong.”

The partners have discussed expanding the summer camps to allow children ages 4 and 5 to attend, offering a family camp and increasing the hours of the camp each day. However, some of the campers, including Jacob Krueger, a second-grader at Sunset Ridge Elementary School in Middleton, said they liked the shorter hours.

Eliza Gepner, who was attending with her friend, Lydia Courtier, both sixth-graders at Kromrey Middle School in Middleton, said she likes how the different specialties balance each other out. For example, she said, yoga reduces any stress you may have with an art project.

Kendall Riemen, a sixth-grader at Indian Mound Middle School in McFarland, said the camp appeals because she really likes cooking and art.

Eliza Ratskoff and Sydney Weiss, both fifth-graders at Kromey, signed up together but said they have made new friends.

“It’s fun to make new friends and just be creative,” Sydney said. “I think all the teachers are very sweet and nice.”

Students have to learn lines and rehearse for the 90-minute performance in two weeks.

Yoga and mindfulness teacher Jamie Gale works with first- and second-graders on a game to make yoga poses during Creative Soul Camp at Sauk Trail Elementary School in Middleton. The day camp is designed to inspire children to explore their creativity.