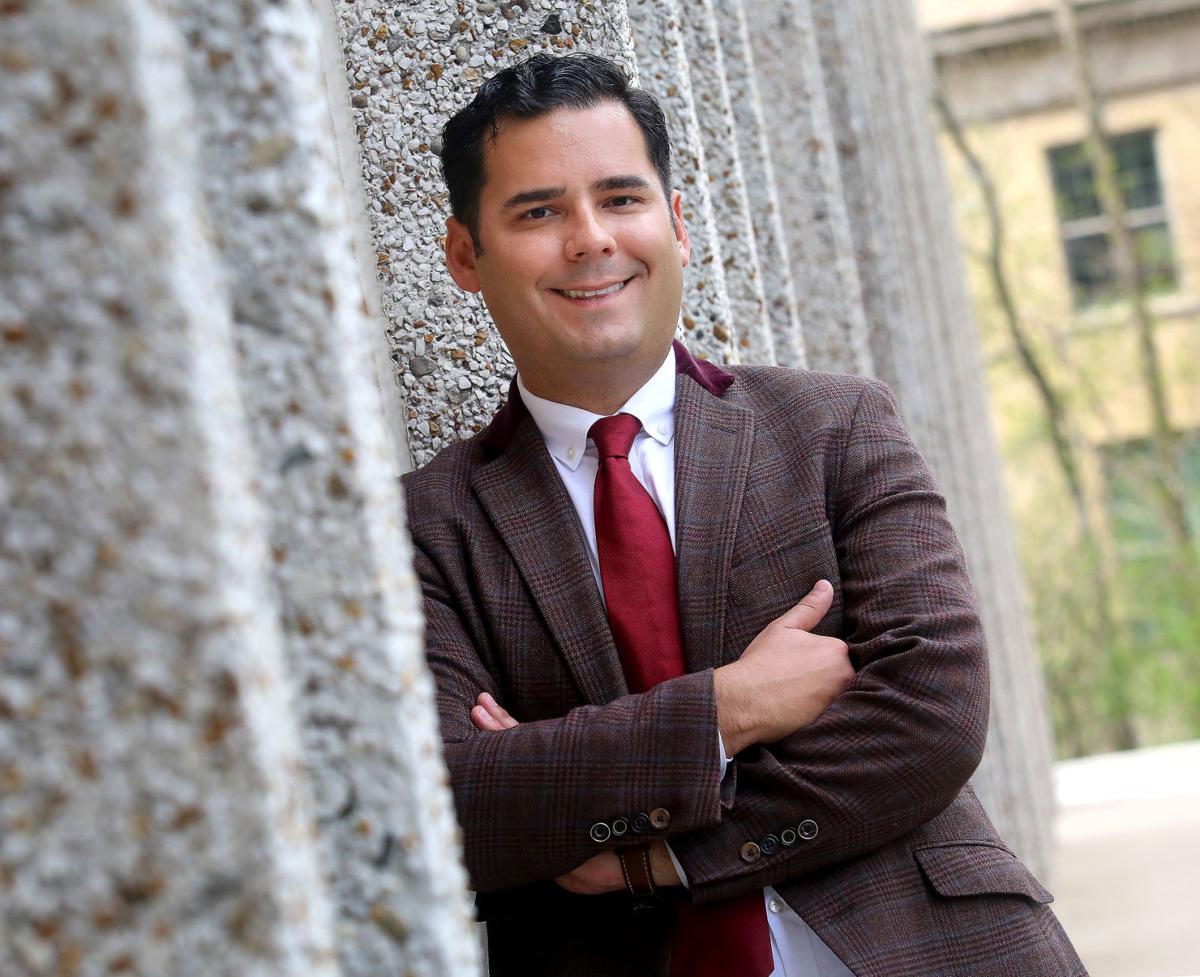 Gary Bennett was chosen in April 2016 to lead the new Office of Educational Opportunity at the University of Wisconsin System. The office, created by Republican legislators, has the ability to bypass local school boards and authorize independent charter schools in Madison and Milwaukee. He is pictured outside his office in Van Hise Hall at UW-Madison on April 21, 2016. 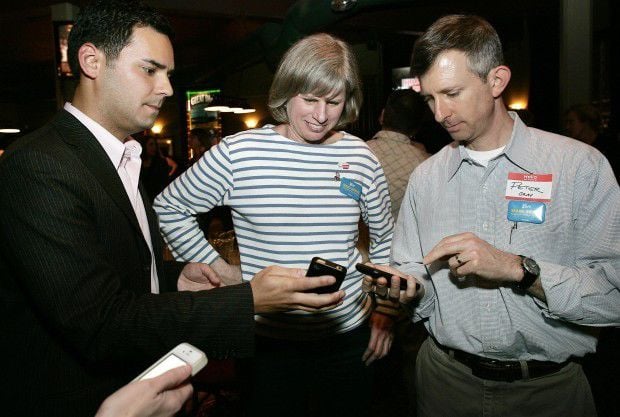 Gary Bennett, left, watches returns come in with Mary Burke, center, the night of her successful election to the Madison School Board in 2012. Bennett says he doesn't question the Madison School District's commitment to serving all kids. "Yet, like any large organization, it is often easier to innovate from outside the system," he told a State Journal reporter in May 2016. "The incremental wait-and-see gets under my skin."

The very soonest Madison residents could see an independent charter school open its doors in the city is fall 2018 — a year later than state officials first planned.

That’s not foot-dragging, it’s prudence, according to Gary Bennett, who was hired last April to run the new Office of Educational Opportunity. Through that office, created by Republican state lawmakers in 2015, Bennett has the power to bypass local school boards in Madison and Milwaukee and authorize independent charters there.

But he’s not in any undue hurry to do it, said Bennett, now finishing his first year as the state’s unofficial “Charter Czar,” a post he’s well aware was not welcomed by some.

“With how divisive charters can be, we’re not going to authorize (charter schools) just to authorize,” Bennett said. “We need to spend the time to get the first few right, so we can add to the education menu (in Madison and Milwaukee), rather than repeating things we have.”

Over the past 12 months, Bennett said he’s met with interested parties “across the state” and explored ways his office might use federal grants to offer some of the start-up money any charter school developer will need.

Work on new independent charter schools in Madison and Milwaukee also has been held up as Bennett helps shepherd through the Legislature a special drug-addiction recovery charter school favored by GOP lawmakers.

Approved by the Assembly 92-2 on April 4, and slated to be taken up by the Senate as soon as May, the recovery school is the only independent charter Bennett will be involved with that will require legislative approvals.

Going forward, he has the power under state law to authorize charter school requests within the boundaries of the Madison and Milwaukee school districts on his own — but he’s decided to share some of that power, he said.

“Even though in statute it’s just me (making the decision), it needs to all be public and transparent, with more than just one person (in effect) choosing a school,” he said.

For example, because his office was created as part of the University of Wisconsin System — with Bennett reporting to UW System President Ray Cross, who hired Bennett — it made sense to give the UW Board of Regents, which employs Cross, the final say on any charter school applications that Bennett recommends, Bennett said.

“It also gets us in line with (the standard procedure) for other higher education (initiatives),” Bennett said.

Bennett also plans to create an advisory board for his office that will vote on his recommendations to authorize charters — though Bennett will retain the power to overrule that board — and a study committee that first will score each charter school request that comes to Bennett using a standardized format that will be publicly available.

In addition, an array of community voices — including UW-Madison faculty members, state lawmakers, parents and potentially any city resident — will be invited to help develop the request for proposals that Bennett aims to issue this summer to gather proposals for independent charter schools, which under state law must be tuition-free and open to all students in the two districts.

Bennett, who also has stayed in touch with Madison School District Superintendent Jennifer Cheatham’s office during the past year, said casting a wide net for support and ideas was the only way his operation would work well.

“The best thing my office can do is increase access to educational opportunities and increase equity,” he said. “The worst thing it can do is create fights for fights’ sake.”

Independent charter schools, while funded by state taxpayers, operate outside most traditional public school rules in a way that supporters say make them more effective and perhaps better able to address long-standing challenges, such as raising test scores for low-income and minority students.

Detractors counter they are a financial drain on the public school system with no guaranteed ability to offer students any better education.

The Madison School District, which already has the power to authorize independent charter schools but so far has not done so, remains in the detractors’ ranks.

“Gary knows how I feel about his office — that I think it’s unnecessary, that our board, like any school board, ought to be making decisions about how to serve students,” Cheatham said. “Our goal is to make that office obsolete.”

Bennett said he hopes to have his standing board and study committee members appointed by late spring, with public listening sessions to be held in the weeks after that to gather input on how the RFP should be developed.

But already, he said, he’s been peppered with ideas for potential charter schools in Madison, including one from parents who now send their children to Monona Grove School District and another from UW-Madison arts faculty, for a comprehensive arts conservatory charter school.

Bennett said he hears out each group that approaches him with a charter school idea but then directs them to the upcoming RFP process, without talking any specifics.

“Once we launch (the RFP), we’ll see how many people are actually out there,” Bennett said, noting the many potential challenges for charter school proposers include finding a building to operate in, hiring staff, picking a curriculum and raising start-up money to buy equipment and supplies and to pay teachers and staff before state aid payments would start arriving, well after the school opens.

“It’s one thing to have an idea,” Bennett said. “It’s a different thing to put pen to paper and say, ‘This is how we’re going to get up and running.’ We’ll see how many people (with viable proposals) are actually out there.”

Bennett also said he would consider pitches for Madison charter schools only by nonprofit entities — calling “the culture” here closed to for-profit entities. He described charters as “incubators of innovative things” that he said are more difficult to do initially within school districts, but that ideally should be absorbed back into them eventually.

“I very much appreciate the acknowledgment that ultimately schools are best under the guidance of a locally elected school board,” she said. “What I don’t love is the assumption that a public school district is incapable of innovation. I disagree with that wholeheartedly.”

The Madison district does have two in-district charter schools — Nuestro Mundo and Badger Rock — that receive some flexibility from rules but whose programs and teaching staffs remain fully under school board control.

In Milwaukee, a few dozen independent charter schools organized in a variety of ways already operate, authorized by entities previously given that power, including UW-Milwaukee and the city of Milwaukee’s Common Council.

He plans to authorize only nonprofit organizations, not for-profit companies, to run independent charter schools in Madison.

How charter schools operate in Wisconsin

Charter schools are public schools in that they are funded by taxpayer money, cannot charge tuition, and must be open to all students, through…

OUR VIEW: His cooperative and transparent approach to spurring greater innovation in urban school districts is encouraging

The program at two high schools and two middle schools is testing whether grades, safety and behavior improve with fewer distractions.

School boards would be able to rescind referendums and enrollment restrictions for the private school voucher program for students with disabilities would be eliminated.

He said there are maybe a dozen groups in Milwaukee looking to work with his office and maybe six to nine in Madison.

A request for proposals published Tuesday lays out a process for getting a charter school open by fall 2018 or fall 2019.

"The only reason to hide is if you're ashamed of what you're doing," School Board member T.J. Mertz said of the University of Wisconsin System's refusal to release names of charter school reviewers.

Since the office started roughly three years ago, it has approved two charter schools.

Gary Bennett was chosen in April 2016 to lead the new Office of Educational Opportunity at the University of Wisconsin System. The office, created by Republican legislators, has the ability to bypass local school boards and authorize independent charter schools in Madison and Milwaukee. He is pictured outside his office in Van Hise Hall at UW-Madison on April 21, 2016.

Gary Bennett, left, watches returns come in with Mary Burke, center, the night of her successful election to the Madison School Board in 2012. Bennett says he doesn't question the Madison School District's commitment to serving all kids. "Yet, like any large organization, it is often easier to innovate from outside the system," he told a State Journal reporter in May 2016. "The incremental wait-and-see gets under my skin."