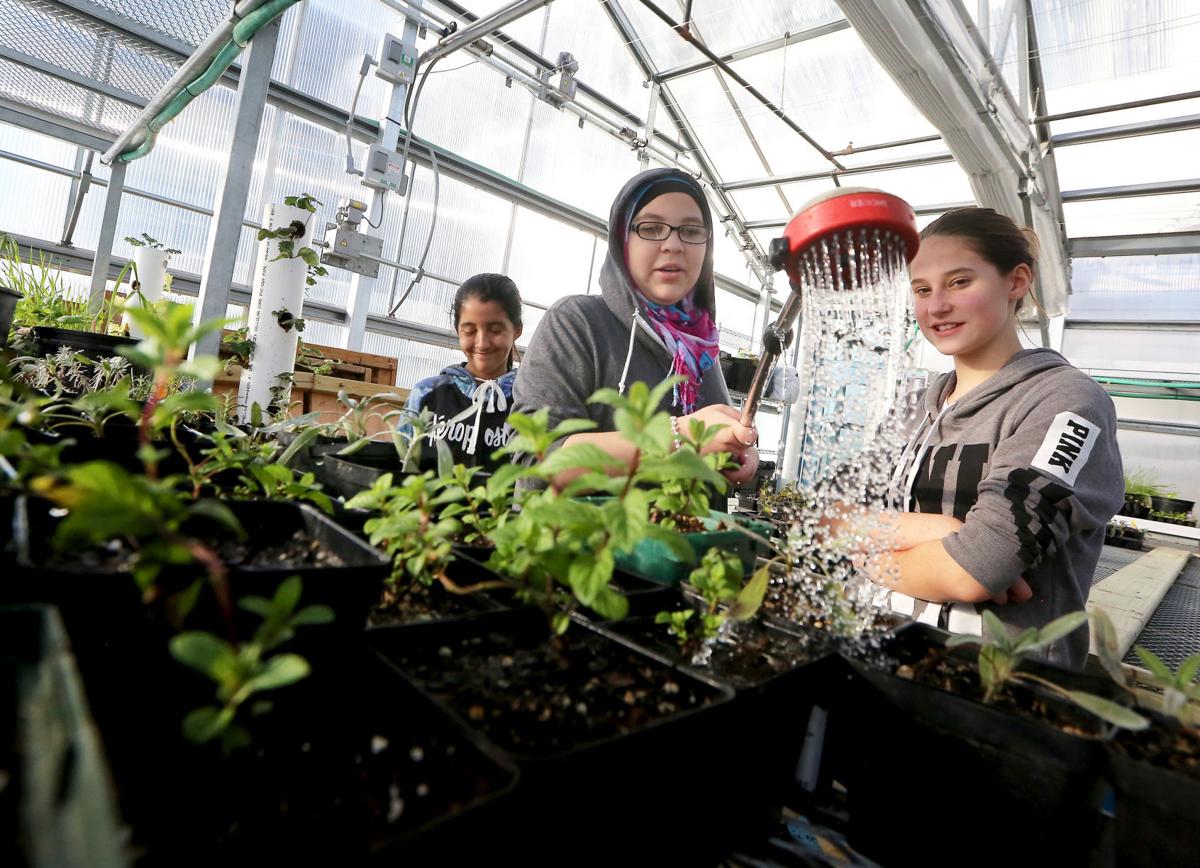 Students at Badger Rock Middle School tend plants in the school's greenhouse Wednesday, part of a curriculum that provides hands-on experiences in urban agriculture and environmental sustainability. Pictured from left are Angelina Angeles-Gonzales, Amina Chadli and Addie Dolgner. The Madison School Board is scrutinizing Badger Rock's academic record as the school's charter comes up for renewal. 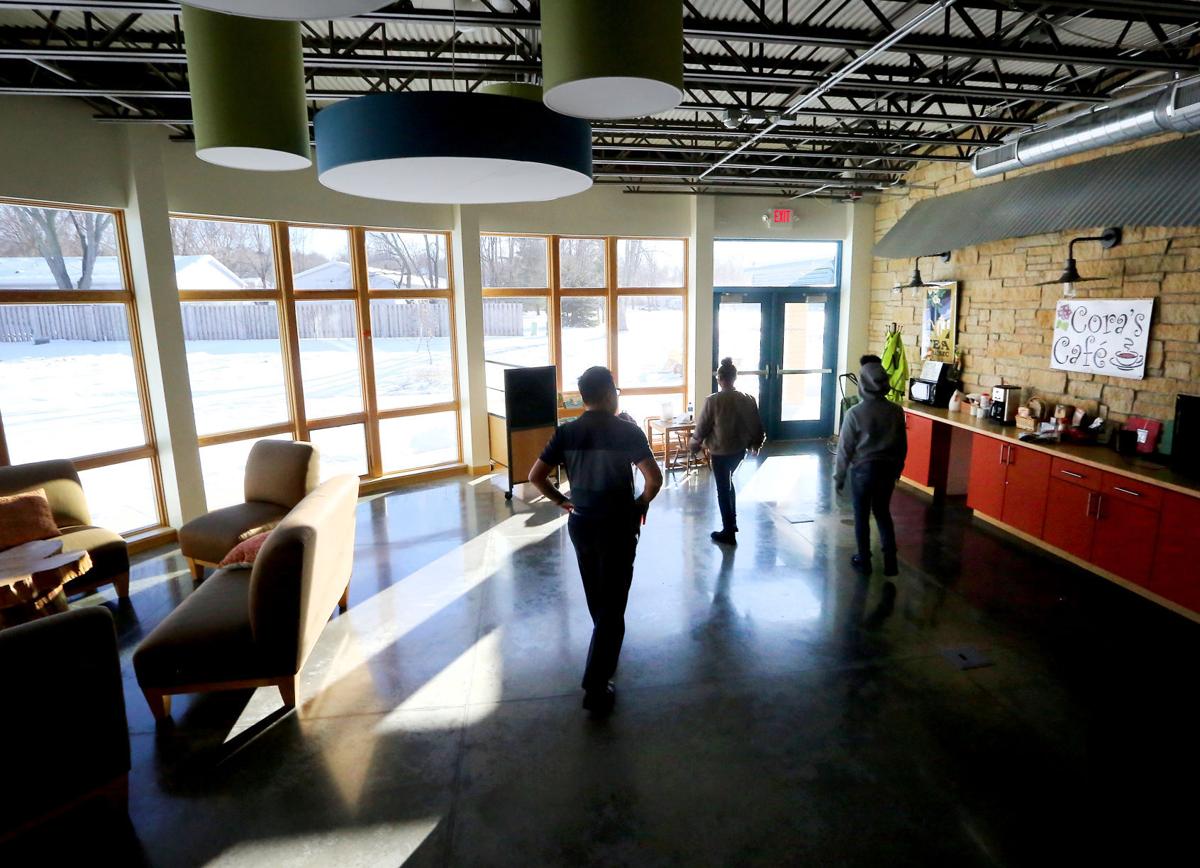 Badger Rock Middle School is housed inside the Badger Rock Neighborhood Center on the city's South Side. The building is owned by the Center for Resilient Cities, a Madison nonprofit organization. 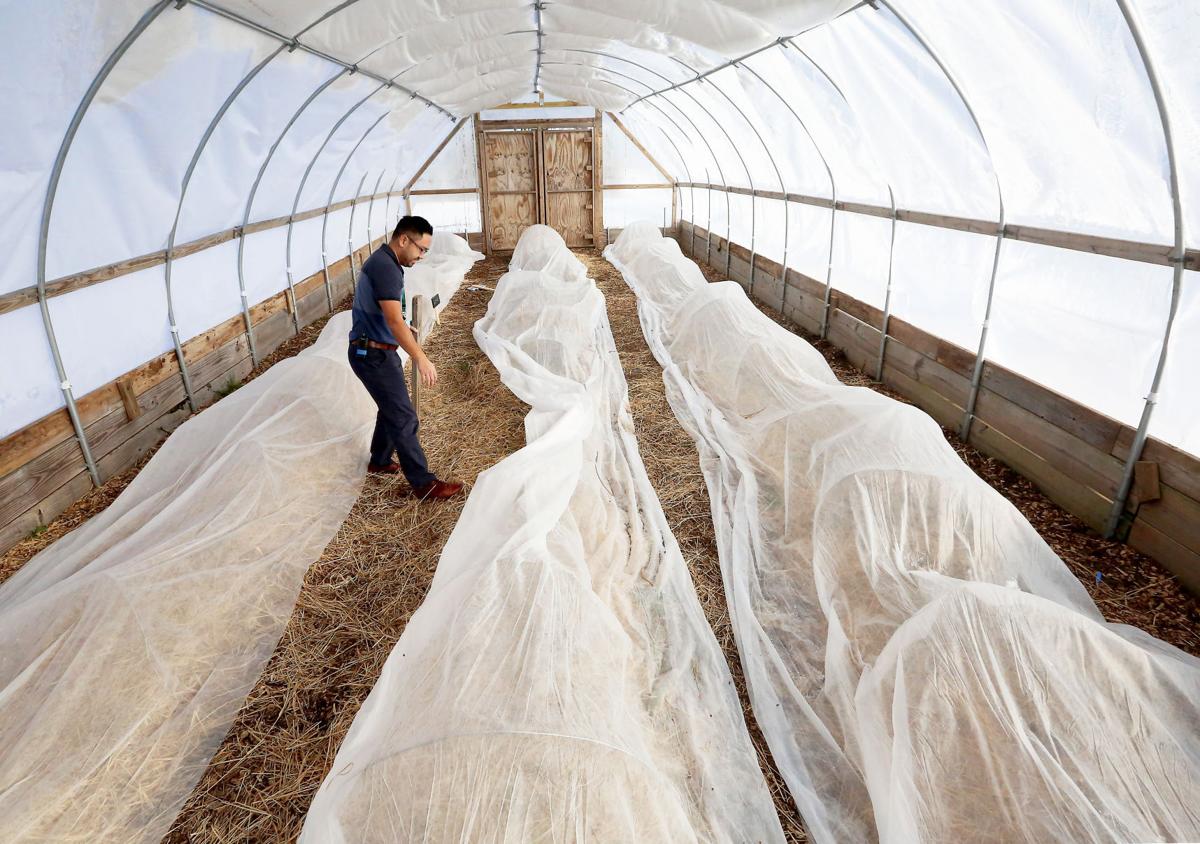 Hong Tran, interim principal at Badger Rock Middle School in Madison, checks the progress of plantings Wednesday in the school's hoop house. "The school really is about engaging kids in authentic experiences," said Tran, who is new to the school and earning praise from its governing body.

A small, environmental-themed charter school in Madison with a substandard academic record is facing heightened School Board scrutiny as its charter comes up for renewal.

Badger Rock Middle School, 501 E. Badger Road, opened in 2011 amid great enthusiasm for its emphasis on urban agriculture, environmental sustainability and project-based learning. Last month, though, it landed in the “fails to meet expectations” category on the latest round of state-issued report cards.

The school’s overall accountability score — which takes into account such things as test scores, student academic progress, and college and career readiness — was the lowest of the 45 district schools that received ratings.

Superintendent Jennifer Cheatham this week called Badger Rock an “under-performing” school but said it “has incredible potential to be an excellent school.” She said she is leaning toward recommending a charter renewal of three years. That’s less than the five-year contract sought by school leaders, but the recommendation still should be seen as a vote of “confidence and hope,” Cheatham said.

The School Board is expected to vote on the issue Monday. Wright Middle School, the district’s oldest charter school, also is to be up for discussion the same night, but for a very different reason. Its leaders say they want to drop the school’s charter status.

The designation no longer makes sense for them, they say, as Wright has operated for many years as a traditional district school.

A charter school is a publicly funded school that does not have to adhere to many of the state laws governing traditional public schools. The intent is to foster innovation and experimentation and to give students more choices.

Madison has three charter schools. In addition to Badger Rock and Wright, there’s the dual-language Nuestro Mundo Community School. Each is an “instrumentality” of the district, meaning the district authorizes the school, employs the staff and retains ultimate authority.

Badger Rock, now in its sixth school year, is the newest of the three. At 75 students, it’s the smallest of any of the district’s 50 schools. Its capacity is 120 students.

It is housed inside a state-of-the-art green building owned by the Center for Resilient Cities, a Madison nonprofit. The building has other tenants and also functions as a neighborhood center for the South Side community. Students have access to the entire site, including gardens, greenhouses and an industrial kitchen.

“The significance of (his presence) on the culture of the school has been amazing,” said Mosgaller, who has been involved with the school for most of its existence. “From my perspective, it’s like night and day.”

Unlike before, members of the school’s governing council now are encouraged to be key players in the development of the school, Mosgaller said. There are new committees for fundraising and communications, a reinvigorated parent-teacher organization and more community partnerships, he said.

The nonprofit Community GroundWorks, for instance, is providing the school with a part-time “farmer-in-residence,” an expert in urban agriculture whose salary is paid for by the Center for Resilient Cities. Students take field trips almost every Thursday through a partnership with the Aldo Leopold Nature Center.

Tran said Badger Rock wants to “push the envelope” on what it means to be a successful school, measuring things beyond test scores, such as neighborhood impact. A free, monthly community meal, sometimes cooked by students, has been drawing 150 to 200 people.

The school serves a student demographic that is significantly poorer than the district as a whole — 67 percent low-income compared to 48 percent districtwide. It also has higher percentages of black, Hispanic and multi-racial students than the district.

The Badger Rock board discussion this week drew some skepticism. Board member TJ Mertz said the school’s latest strategic plan treats the concept of project-based learning — actively exploring a real- world problem — as if it’s something new that’s going to be introduced at the school, even though it was touted as one of the school’s initial selling points.

“You’ve been in existence for six years,” Mertz said. “My question is, what were you doing these six years if you weren’t doing project-based learning?”

Mosgaller said project-based learning had been occurring, “but it was what I call ill-defined, ad hoc and personality driven.” The process is now better defined and will be well documented, he said.

Board member Ed Hughes said charter schools are supposed to be laboratories of innovation that can spread ideas to other educators.

“I’m having a hard time understanding what could potentially be replicable throughout our schools from your model and what Badger Rock plans to do,” he said.

Tran said Badger Rock would have important things to teach about project-based learning, even if just from the standpoint of mistakes to avoid. Other innovations have come in thematic teaching and in engaging parents and the community in the life of the school, he said.

The school’s scores on state standardized tests have consistently been below district middle school averages. Mosgaller attributed a particularly bad showing in math scores last year to an online math curriculum that did not work out and has since been dropped.

“We pinpointed the problem and changed the model,” he said. “That’s what charter schools do.”

School Board policy allows for charter renewals of between two and five years. However, the board could waive the policy to allow for a one-year probationary renewal. If the board does not renew the charter, district administrators would then provide a recommendation on whether to dissolve the school or turn it into a magnet or neighborhood school.

Badger Rock’s leaders say they want a full five-year charter extension so that parents, staff members and donors can be assured of its future.

Wright Middle School seeks to give up its charter school status

The approach no longer makes sense for the school, its leaders say.

Survey: Most would not object to starting Madison middle schools later in the morning

But transportation costs remain a big barrier to switching times.

In Madison, a large number of test opt outs hurt many scores.

Among parents, both enthusiasm and fear for what lies ahead.

The small charter school has struggled academically, but its supporters say it is turning around.

Six candidates are running, but not incumbent Michael Flores, who changed his mind.

Students at Badger Rock Middle School tend plants in the school's greenhouse Wednesday, part of a curriculum that provides hands-on experiences in urban agriculture and environmental sustainability. Pictured from left are Angelina Angeles-Gonzales, Amina Chadli and Addie Dolgner. The Madison School Board is scrutinizing Badger Rock's academic record as the school's charter comes up for renewal.

Badger Rock Middle School is housed inside the Badger Rock Neighborhood Center on the city's South Side. The building is owned by the Center for Resilient Cities, a Madison nonprofit organization.

Hong Tran, interim principal at Badger Rock Middle School in Madison, checks the progress of plantings Wednesday in the school's hoop house. "The school really is about engaging kids in authentic experiences," said Tran, who is new to the school and earning praise from its governing body.