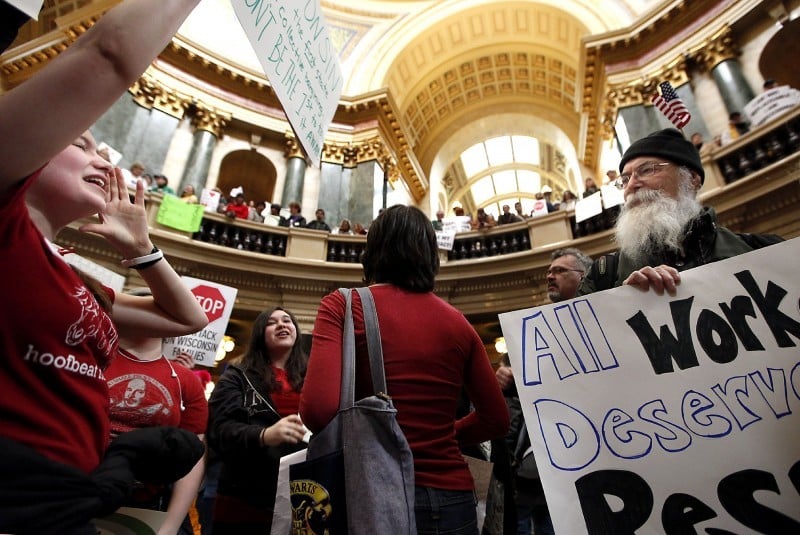 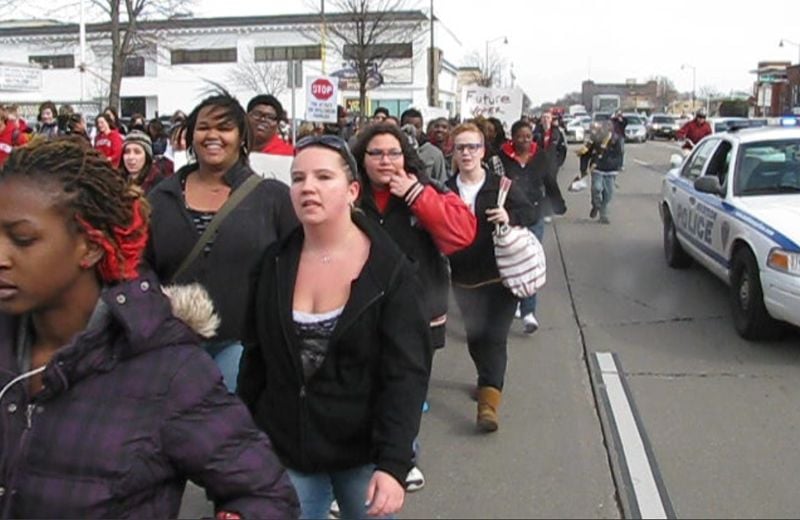 East High School students walk down East Washington Ave. with a police escort on Tuesday. They walked to the capitol in Madison to protest Gov. Scott Walker's proposal to remove collective bargaining rights for most Wisconsin public employees. 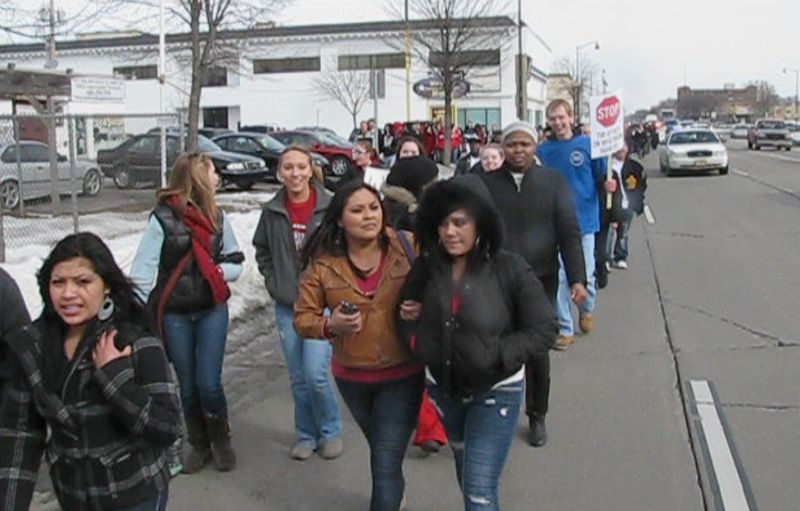 East High School students walk down East Washington Avenue with a police escort on Tuesday. They walked to the capitol in Madison to protest Gov. Scott Walker's proposal to remove collective bargaining rights for most Wisconsin public employees.
MATTHEW DeFOUR | | 608-252-6144

District Superintendent Dan Nerad made the announcement at 11 p.m. Tuesday after 40 percent of the 2,600 members of the teachers union had called in sick and more were expected to do so.

"At this ratio we have serious concerns about our ability to maintain safe and secure school environments," Nerad said in the announcement.

Although classes won't be held for students, all district staff members will be expected to report to the school, Nerad said in a statement.

Earlier Tuesday, Nerad said teachers who take a sick day will be asked to show proof of a medical reason. Those who don't could face sanctions such as docked pay. Teachers aren't able to take a personal day with less than three days' notice.

Nerad's decision came after Madison Teachers Inc. executive director John Matthews said the union was contacting members and urging them to call in sick and instead attend a rally scheduled for Wednesday at the Capitol in opposition to Walker's collective bargaining proposal.

The campaign is the first coordinated absence by Madison school employees in 16 years, Matthews said.

"We have only one day where we can make a difference, and it's because of the ridiculous means by which the governor tried to shove this down the throats of public employees," Matthews said.

Earlier Tuesday, Nerad sent a letter to parents warning of the possibility of "excessive" teacher absences and that principals were preparing contingency plans to keep school open.

Stacy Billings, a parent of two Madison students, said the district's letter upset her. She said she supports unions and opposes Walker's proposal but is against a teacher protest during school hours.

"That's not acceptable to me," Billings said. "My tax dollars pay for the teachers to teach and not to protest."

It's unclear whether school will be held Thursday or Friday.

Also Tuesday, nearly 800 Madison East High School students — half the school — walked out to participate in a demonstration at the state Capitol. Students at West, Memorial and at other schools around the state — from Shullsburg to Sheboygan — also participated in demonstrations during school hours.

Other demonstrations and protests at schools in Wisconsin are scheduled for Wednesday.

East High senior Ona Powell, whose mother is a Madison teacher and father is a professor, coordinated the walkout through Facebook and word-of-mouth at school on Monday.

"I felt outraged that unions are being attacked and didn't want my mom hurt by this," Powell said.

As teachers beamed and offered thanks, student organizers in the hallways handed out signs identifying each as a "future worker, future voter," proclaiming this was a "Walk out for Walker out," and calling on the Legislature to "kill this bill."

Students said teachers appeared torn by their support for what their students were doing, but also awareness that they weren't supposed to encourage student political activity.

Travis Turnquist, a senior who stayed at East on Tuesday because his parents, a credit card agent and construction worker, didn't grant him permission to leave, said the protest was the topic of discussion in each of his classes Monday. Though teachers mostly responded to questions from curious students, some were telling students they wouldn't be marked absent if they walked out, Turnquist said.

Matthews said the union wasn't involved in Tuesday's student walkouts, though he called them a "teachable moment." Madison School Board policy states "teachers shall refrain from exploiting the institutional privileges of their professional positions to promote candidates or parties and activities," which includes protests.

Also Tuesday, the Madison School Board issued a statement urging Walker to reconsider the legislation.

Madison schools will close Wednesday due to 'excessive staff absences'

What do you think about Madison schools canceling classes because of teacher absences?

Send your thoughts to wsjcity@madison.com. Include your name and contact information, and we might use your opinions in a story.

Parents in Madison took off work, scrambled for child care and taught their own lessons Wednesday after school district officials canceled classes due to a large number of teacher absences.

With the cancellation of classes in the Madison Metropolitan School District on Wednesday, all school-related activities such as sports, extra-curricular and after-school functions will not be held as well.

Letter from Dan Nerad to parents

In one of the largest displays of protest in recent memory, thousands of angry union supporters gathered at the state Capitol Tuesday to oppose a bill by Gov. Scott Walker that would greatly weaken organized labor in Wisconsin.

The president of the Wisconsin state Senate says there are enough votes among Republicans to pass Gov. Scott Walker's plan to end collective bargaining rights for nearly all public employees.

In one of the largest displays of protest in recent memory, thousands of angry union supporters gathered at the state Capitol Tuesday to oppos…

East High School students walk down East Washington Ave. with a police escort on Tuesday. They walked to the capitol in Madison to protest Gov. Scott Walker's proposal to remove collective bargaining rights for most Wisconsin public employees.