Lana about Svetlana: Stalin's daughter on her life in Wisconsin
0 Comments
Share this
1 of 3 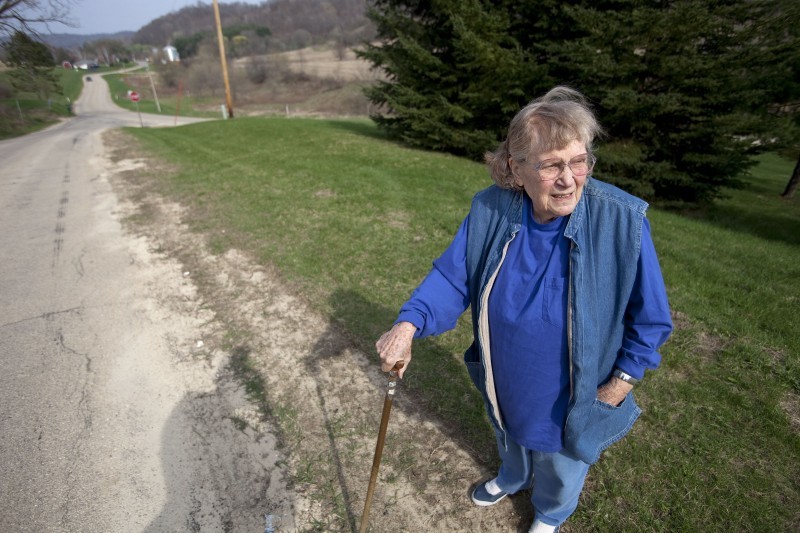 Lana Peters, the daughter of Josef Stalin, the late dictator of the Soviet Union, on a rural road outside Richland Center, where she now lives. 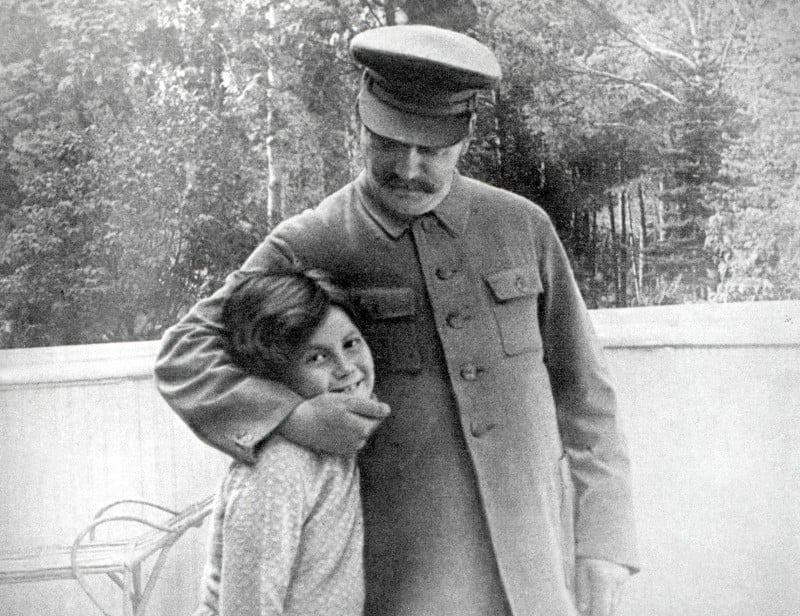 Lana Peters, who now lives in Richland Center, as a girl with her father, the Soviet dictator Josef Stalin. 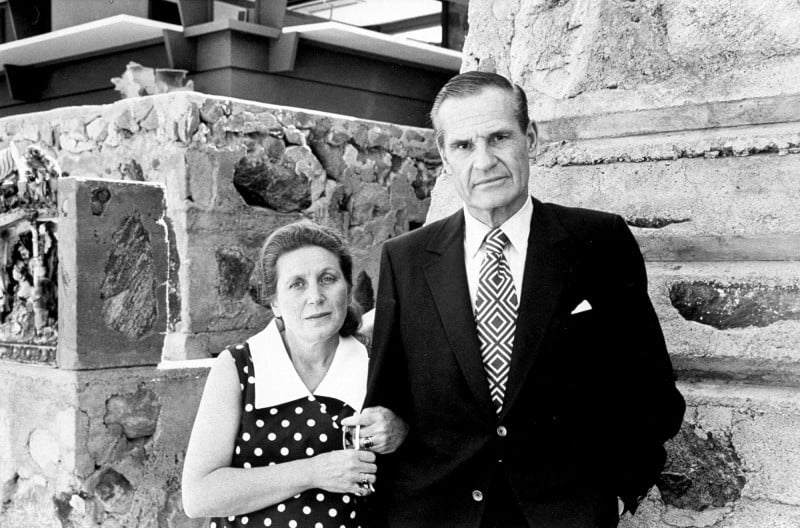 Lana Peters with William Wesley Peters, a Frank Lloyd Wright apprentice whom she married and divorced within a few years in the 1970s.
By DOUG MOE | | 608-252-6446

She lives in a one-bedroom apartment in Richland Center, surrounded by photos of her beloved daughter.

"I am quite happy here," she said.

She was seated in her living room, having positioned herself away from the window. The sunlight hurts her eyes.

She was asked: "Do your neighbors know your background?"

Lana Peters, 84, is the only daughter of Josef Stalin, the brutal dictator of the Soviet Union who died in 1953.

Her defection to the United States in 1967 - when she was known as Svetlana Alliluyeva - made headlines around the world.

Peters first came to Wisconsin in 1970, and while she has lived elsewhere, sometimes for extended periods, she has always returned. She moved to Richland Center from Spring Green within the past three years.

Peters is a small woman. She uses a cane and has some difficulty walking, but her mind is lively. She smiles often. She likes to sew and read, mostly non-fiction. She listens to public radio and doesn't own a television set.

While insisting she is not reclusive, Peters rarely gives interviews. She granted this one, she said, because she wanted to try to clarify a comment attributed to her - taken from a documentary film on her life - that appeared in an Associated Press story in Monday's Wisconsin State Journal.

The film, "Svetlana About Svetlana," directed by Lana Parshina, plays the Wisconsin Film Festival on Sunday.

Parshina interviewed Peters in Spring Green in the summer of 2007. According to the Associated Press story on the film, Peters talks in "Svetlana About Svetlana" of how, in retrospect, she might have been better off living in a neutral country, like Switzerland, rather than coming to the United States.

This week, Peters said she's glad to be here.

"I am quite well and happy," she said. "Richland Center has a hospital and good social services for seniors."

Peters continued: "I have an American-born daughter. The only unhappiness of my life is that I would like to live closer to her."

The daughter, Olga, who now goes by the name Chrese Evans, lives in Portland, Ore.

The daughter was the result of Peters' 1970 marriage to William Wesley Peters, an apprentice of Frank Lloyd Wright.

It was through Wright's widow at Taliesin that Peters met her future husband. After her defection to the United States, she said, Olgivanna Lloyd Wright invited her to visit Taliesin West in Arizona and Taliesin in Spring Green.

"I was snowed by letters of invitation," she said. "For six months they kept inviting me. I was never very anxious in the beginning. Finally I could not refuse her because she was an old lady and she wrote me very sweet letters."

The payoff was a whirlwind romance - just a few weeks - ending in a brief marriage to Wes Peters, and a daughter.

Peters thinks now that she was invited to Taliesin because it was thought she had personal wealth through her late father.

"This is completely ridiculous," she said. "My father was a very old-fashioned man. He believed that children should have no money. He never gave, even allowance, to me or my brothers. He lived completely on state expense. He never acquired private wealth."

Peters was asked if she thinks often of her father.

She said she had fallen in love with an older man, a writer and filmmaker named Aleksei Kapler. Her father did not approve.

Kapler had introduced her to the arts - giving her books, taking her to galleries - and Peters said the second time her father "broke" her life came when she applied at a university to study the arts.

Josef Stalin scoffed. "Bohemians," Peters recalled him saying. "You want to be with Bohemians?" He insisted she study history and become "an educated Marxist."

Peters was asked: "Do you think your father loved you?"

"Oh, yes," she said. "I looked like his mother. I had this red hair, which I still have. It's not colored. It's my own hair. I have freckles all over, like her."

She continued: "He was a very simple man. Very rude. Very cruel. There was nothing in him that was complicated. He was very simple with us. He loved me and he wanted me to be with him and become an educated Marxist."

She said her father could never imagine her living outside of Russia, but she has, for 43 years, apart from two years in the 1980s when she moved back.

Now Richland Center is home. "I have many friends here," she said. "People who I recognize."

She wouldn't mind relocating to Portland to be nearer her daughter, Peters said. But moving is expensive and her daughter enjoys coming to Wisconsin to visit.

They speak most nights on the phone. The Associated Press story Monday said Peters' daughter worries that the documentary film is an invasion of her mother's privacy, but Peters has reconciled herself to one unshakable reality of her life.

"Wherever I go," she said, "here, or Switzerland, or India, or wherever. Australia. Some island. I always will be a political prisoner of my father's name."

Lana Peters — who was known internationally by her previous name, Svetlana Alliluyeva — died of colon cancer Nov. 22 in Wisconsin, where she lived off and on after becoming a U.S. citizen, Richland County Coroner Mary Turner said Monday.

Lana Peters, the only daughter and last surviving child of Soviet dictator Josef Stalin, died of colon cancer Nov. 22 in Richland County. Peters was 85 and had lived in Richland Center for the past several years.

Check back frequently for 77 Square's comprehensive coverage of the Wisconsin Film Festival, from interviews with filmmakers to daily reports …

Lana Peters, the daughter of Josef Stalin, the late dictator of the Soviet Union, on a rural road outside Richland Center, where she now lives.

Lana Peters, who now lives in Richland Center, as a girl with her father, the Soviet dictator Josef Stalin.

Lana Peters with William Wesley Peters, a Frank Lloyd Wright apprentice whom she married and divorced within a few years in the 1970s.
© Copyright 2021 Capital Newspapers Inc., madison.com , 1901 Fish Hatchery Rd Madison, WI | Terms of Use | Privacy Policy
Powered by BLOX Content Management System from TownNews.com.
You don't have any notifications.