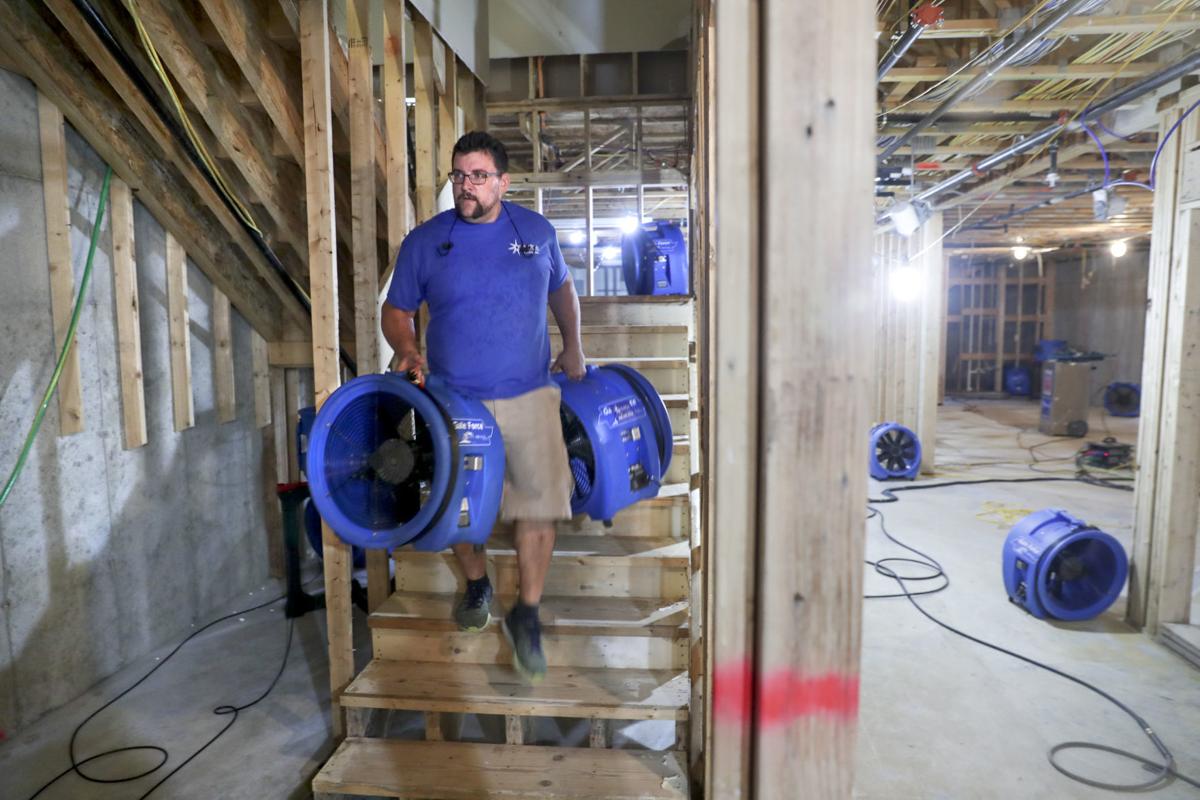 Gilda’s Club is working to repair about $1 million in damage to its clubhouse at 7907 UW Health Court. Josh Norton with NorthStar Restoration Services was continuing work to dry out the basement Wednesday. 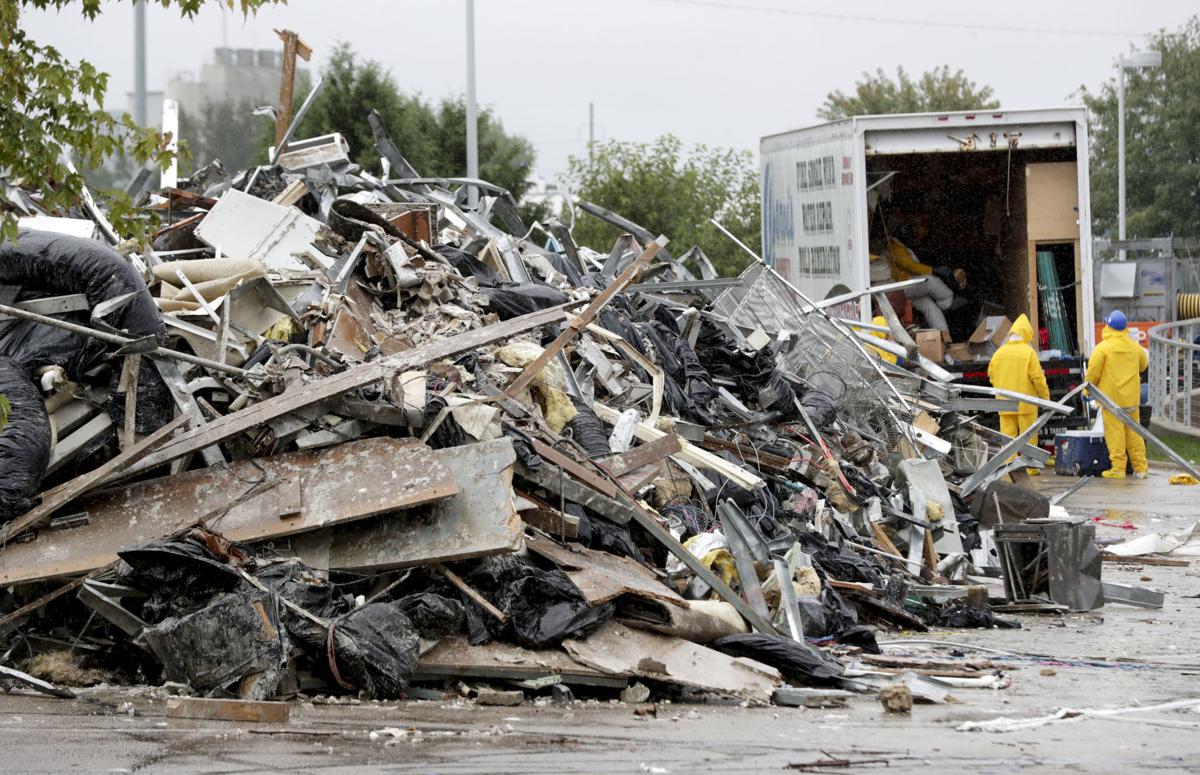 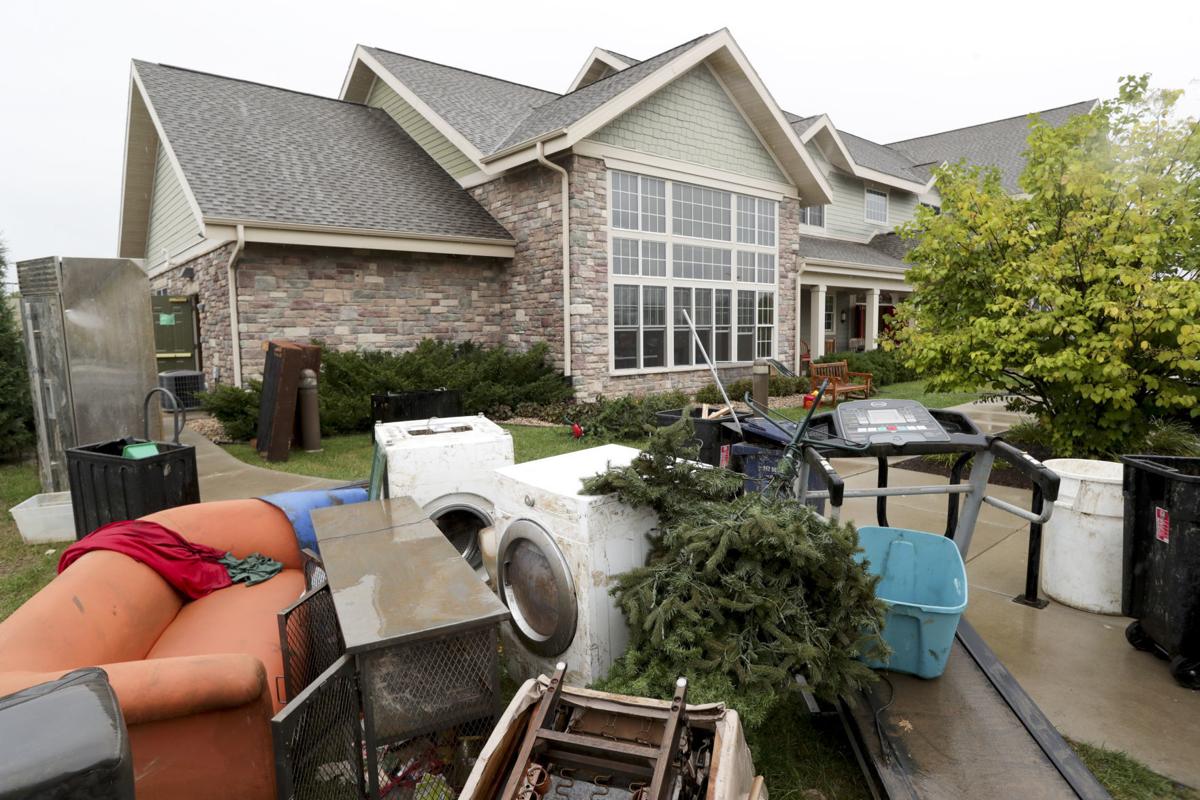 MIDDLETON — Damage from the historic rainfalls that drenched Dane County in the past two weeks have topped $154 million.

County officials estimate 1,544 residences were affected by the flooding, including five that were destroyed and 302 with major damage.

Insurance covered only about 2 percent of the $78.3 million in residential damage that occurred between Aug. 17 and Sept. 3, according to an estimate submitted to Wisconsin Emergency Management.

The flooding also caused more than $39 million in damage to public infrastructure and buildings.

And more than two weeks after a storm that dropped more than 14 inches of rain on the western part of the county, at least a dozen businesses are still closed or operating out of temporary housing and others are working to repair millions of dollars of damage.

The city of Middleton estimated Wednesday that total costs have exceeded $45 million, including $35 million to commercial properties and $4.7 million to residences.

Those damage totals are likely to climb as recovery continues.

“The important part about these numbers is they’re fluid,” said J. McLellan, spokesman for Dane County Emergency Management. “It probably has changed by now. … These numbers are the beginning of a process.”

In Middleton, some businesses, including the Fairfield Inn and Suites and Johnny’s Italian Steakhouse, remain closed as owners work to repair damages.

The nearby Costco, where dozens of employees and customers spent a night stranded in the warehouse as about a foot of water covered the floors, reopened after eight days and incurred an estimated $1 million in property damage, according to the city.

Other companies have found ways to keep the doors open, even if those doors are somewhere else.

About 700 employees of UW Health are working at other locations as the organization works to repair an estimated $2 million in damage to its administrative building.

TDS Telecom lost the contents of a warehouse and field service center in Middleton as well as 10 vehicles, with an estimated $4 million in damage, according to the city.

But the company relocated workers to offices in Verona and Waunakee and brought in crews from other parts of the state to restore service to its customers, said public relations manager DeAnne Boegli.

“We believe we’re on a good track,” Boegli said.

After days of searching, the ANiU Salon and Spa reopened Thursday in the Phenix Salon Suites on Mineral Point Road and Nail Spa Plus on Whitney Way in Madison.

Manager Tonya Cramer said she expects to be in the temporary location for at least a couple of months.

The Primrose School of Middleton has been holding classes for its 130 students in the Blackhawk Church while working to replace drywall and disinfect the 12,000-square-foot building, which was inundated with floodwater and sewage.

“We’re doing everything we possibly can to get the school back open for our families,” said owner Amanda Kienbaum.

Gilda’s Club incurred what could be $1 million in damage when about 400,000 gallons of water poured into the basement of its clubhouse at 7907 UW Health Court.

Norton said it took about four days to pump the water out, and his workers pulled about a dozen truckloads of damaged building materials from the lower levels, which he was attempting to dry Wednesday with 17 dehumidifiers and about 130 fans.

“But we’re coming back,” she said. “It’s a process and will take us months.”

In the meantime, the cancer support nonprofit group is holding meetings in nine off-site locations and is moving into temporary office space provided by Exact Sciences and Alphagraphics.

Stenz said the clubhouse had flood insurance, but Gilda’s Club is trying to raise money to cover the $100,000 deductible and any costs that exceed the $1 million cap.

She said renovation plans will include efforts to protect the clubhouse from future flooding.

“We’ve been around for a decade,” Stenz said. “And we plan to be around for decades more.”

State officials are tentatively planning to incorporate weather-related damages in a 20-county area that stretches from La Crosse to Manitowoc.

The city is in conversations with BCycle, which operates a bicycle-sharing system in Madison, on whether it would be appropriate for Middleton.

Gilda's Club Madison was down but not out, after devastating floods hit the facility in Middleton last August.

Dredging waterways, purchasing or restoring more wetlands and protecting creeks and rivers with buffer strips near farmland are among the 46 draft recommendations.

Wisconsin has only six dams considered a risk to human safety that are in poor condition, according to data compiled by the Associated Press, but last year alone eight dams failed across the state amid record-setting rainfalls.

Gilda’s Club is working to repair about $1 million in damage to its clubhouse at 7907 UW Health Court. Josh Norton with NorthStar Restoration Services was continuing work to dry out the basement Wednesday.