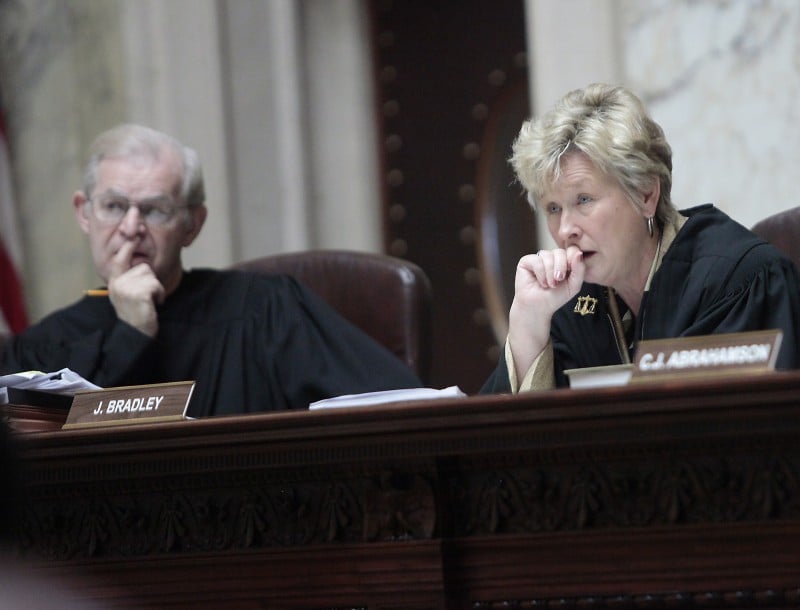 Wisconsin Supreme Court justices David Prosser and Ann Walsh Bradley consider oral arguments during a hearing regarding a lawsuit involving the state's budget bill at the state Capitol on June 6. 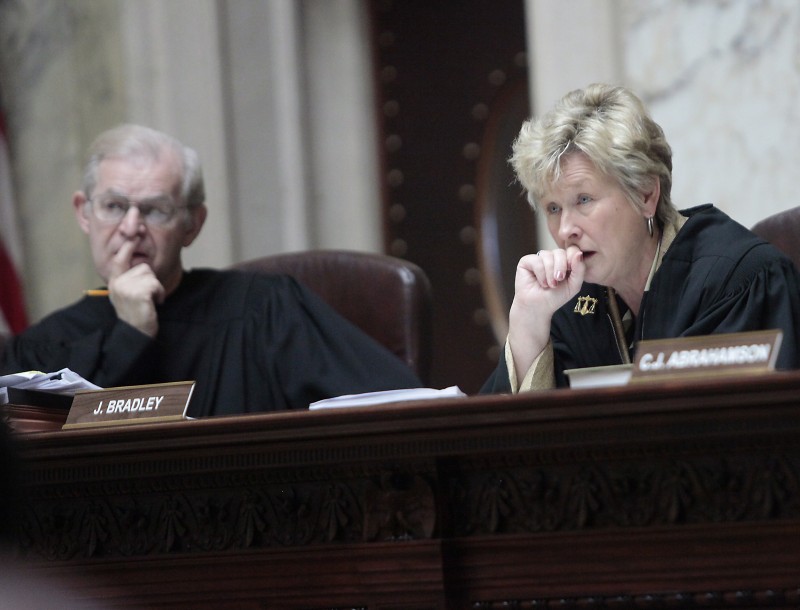 Although a special prosecutor decided not to bring criminal charges in the June 13 altercation between two state Supreme Court justices, a disciplinary panel continues to investigate.

But even if the Wisconsin Judicial Commission recommends discipline in the case involving Justices David Prosser and Ann Walsh Bradley, the members of the court may have a conflict of interest that could prevent them from deciding the matter, experts in judicial ethics say.

The state’s Code of Judicial Conduct specifically prohibits judges from presiding over cases in which they are witnesses in the matter under dispute. Six of the seven justices were present when the argument erupted just outside Bradley’s office, culminating in Prosser putting his hands on Bradley’s neck. Justice Patrick Crooks was the only justice absent.

Cindy Gray, director of the Center for Judicial Ethics, said she can’t foresee any scenario in which members of the high court could preside over a disciplinary case arising from the altercation. Even Crooks could need to step aside since he is privy to information about the incident that may not be introduced in court, Gray said.

But other experts said members of the court could decide to stay on any matter stemming from the commission’s investigation, since they are the only ones under the state constitution who can discipline judges. Discipline can range from public reprimand to suspension to removal from the bench.

“There is an ancient doctrine called the ‘rule of necessity,’ which provides that you need judges to decide cases and ... it would be worse to have no one there to decide the case than to have otherwise disqualified judges do the deciding,” Indiana University Law Professor Charles Geyh said.

Some states have mechanisms allowing or requiring judges outside of their highest courts to determine discipline for members on those courts, but Wisconsin does not. Marquette University Law Professor Chad Oldfather said the justices conceivably could create a temporary “alternate supreme court” to hear any disciplinary case.

“This happened a decade or so ago in Minnesota,” Oldfather said. “The supreme court there had a case in which one of the parties was a close relative of the chief justice. All the members of the court recused themselves, and the case was heard by a court made up entirely of former justices.”

Chief Justice Shirley Abrahamson has another solution: Allow the court to appoint judges at random to fill in for Supreme Court justices who disqualify themselves from cases. That proposal is on the agenda for discussion at the court’s administrative conference on Thursday.

The court has encountered similar problems of justices sitting in judgment of their colleagues. Two justices — Annette Ziegler and Michael Gableman — have faced discipline in the past four years, adding tension to an already fractious court.

Ziegler was reprimanded after she acknowledged having a conflict of interest when she sat on cases involving West Bend Savings Bank because her husband served on the bank’s board of directors. Gableman avoided discipline after his colleagues deadlocked 3-3 along ideological lines on whether an ad he ran against Justice Louis Butler violated the prohibition against judicial candidates making false statements about their opponents’ records.

“To have the Supreme Court be the final arbiter in these types of judicial misconduct cases (involving Supreme Court justices) is problematic in the extreme,” said Mike McCabe, executive director of the Wisconsin Democracy Campaign, which filed the complaint against Ziegler.

In that case, McCabe said he believes the process worked — up to the point of deciding what discipline to impose. “They went with the weakest possible option — reprimand,” he said. “I believe that a minimum suspension was in order.”

Robert Kraig, executive director of Citizen Action of Wisconsin, which filed the complaint against Gableman, said it’s time to change how justices are disciplined.

“I think it’s becoming very clear the very divided and contentious court can’t police itself at all,” Kraig said. “There needs to be an independent mechanism, I think, that is seen as impartial and not controlled by the justices.”

Wisconsin Judicial Commission Executive Director James Alexander said the commission will continue its probe and fulfill its duty under the law to investigate judicial misconduct, even though it’s possible any recommendation for discipline would be dead on arrival at the Supreme Court.

“The commission has no authority to solve that problem,” Alexander said. “There’s nothing we can do about it.”

If sanctions are recommended, Geyh said, the best scenario would be for the justice or justices to agree to them. The other options aren’t pretty, he said.

Reacting to a series of conflicts among members of the state Supreme Court including a recent physical altercation, Chief Justice Shirley Abrahamson is proposing changes that would make the court more accountable to the public and more open to public scrutiny.

Less than two hours after Supreme Court Justice Ann Walsh Bradley was involved in an altercation with another justice, she walked into her condo to find her husband making dinner. Most nights, they kiss before asking how the other's day went. But that didn't happen June 13.

Justices Ann Walsh Bradley and David Prosser gave conflicting accounts of their altercation amid the court's wrangling over the state's controversial collective bargaining law. But what is clear from in the report is that conservative justices felt pressure from the Legislature’s Republican leaders to issue a decision.

In interviews with sheriff's detectives, members of the state Supreme Court painted a picture of Justice David Prosser as a sometimes hot-headed colleague who called other justices names and at times made them fear for their safety.

Justice Prosser 'gratified' at prosecutor's decision not to press charges

No criminal charges will be filed in an alleged fracas between two state Supreme Court justices in June as the court was deciding to uphold the controversial collective bargaining law, a special prosecutor said Thursday.

Wisconsin Supreme Court justices David Prosser and Ann Walsh Bradley consider oral arguments during a hearing regarding a lawsuit involving the state's budget bill at the state Capitol on June 6.