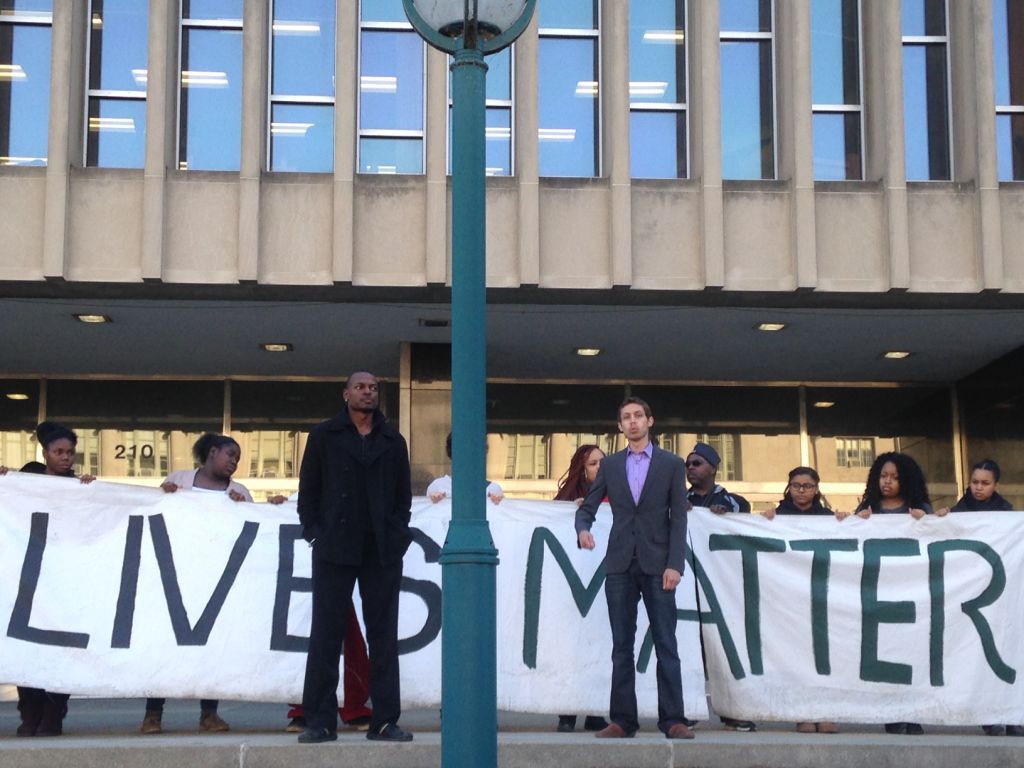 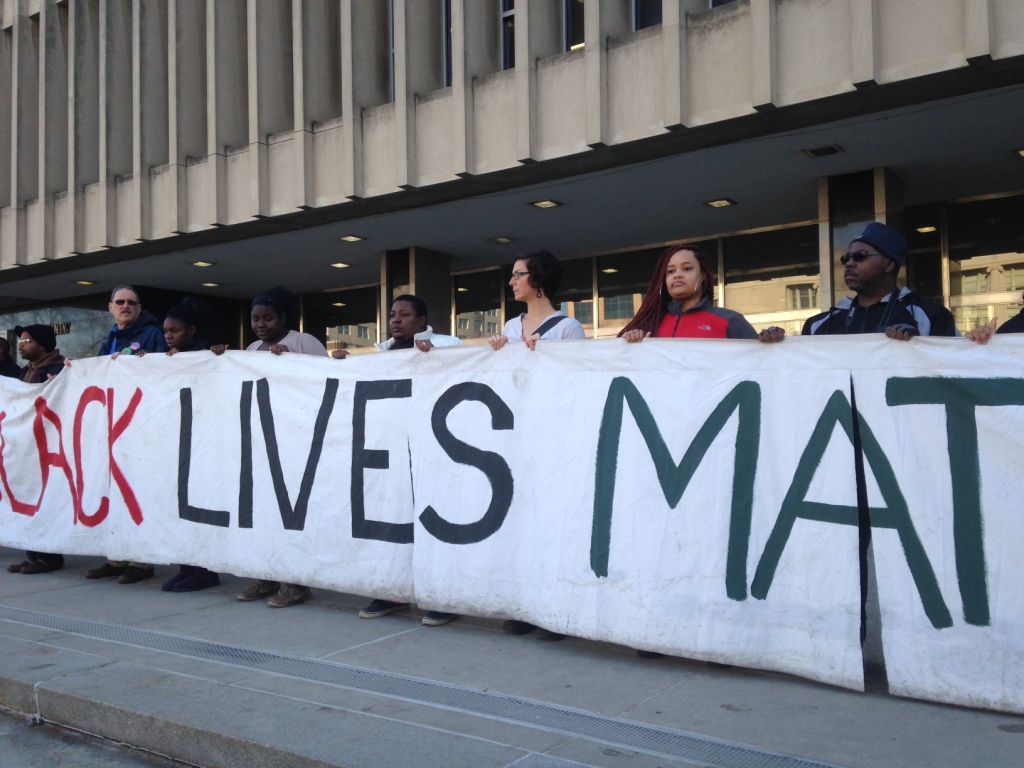 Demonstrators hold a sign reading Black Lives Matter at a rally in March 2015 in front of Madison's City-County Building. 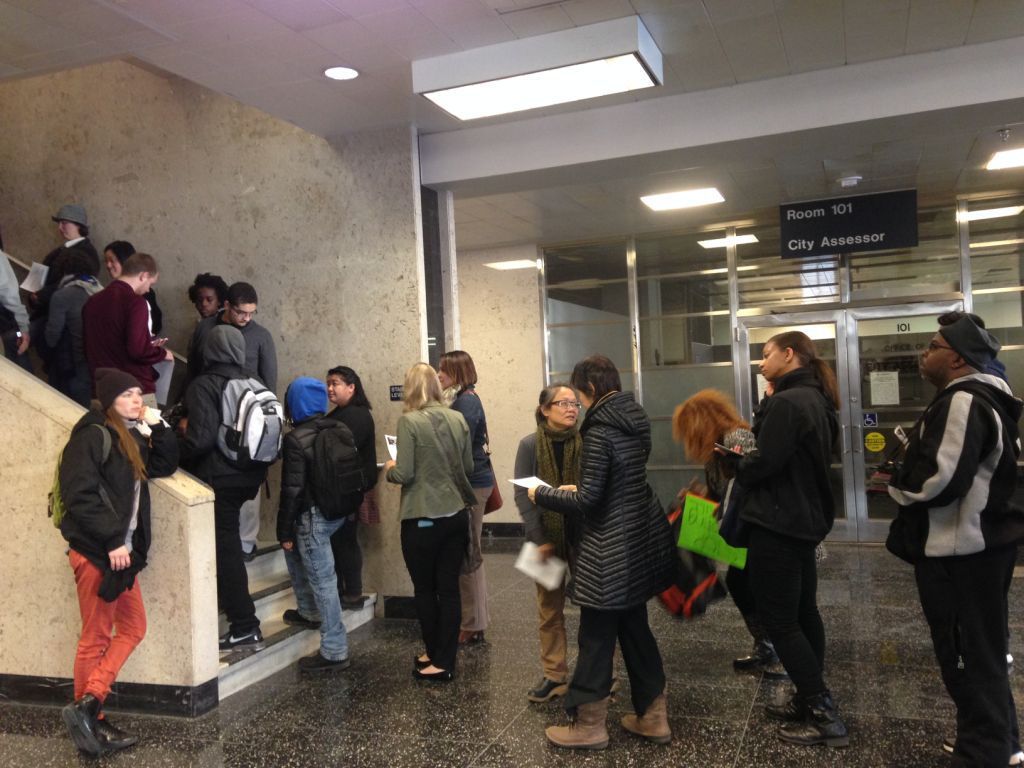 Protesters wait in line on the steps leading up to the city council chambers to speak in opposition to jail funding at the county's Public Protection and Judiciary Committee Tuesday.

A small fraction of the crowd of 1,500 that filled the Capitol rotunda Monday in response to the shooting of Tony Robinson gathered on the steps of city hall Tuesday to rally against what protesters are calling state violence.

Demonstrators at Tuesday's rally, organized by the Young Gifted and Black Coalition, were protesting against mass incarceration and, specifically, efforts by the county to fund a new jail. Rally leaders encouraged demonstrators to speak at two county meetings, the county's Public Protection and Judiciary Committee and Health and Human Needs Committee, which met Tuesday evening.

"Speak from your soul, speak to express yourself and why you're here," Matthew Braunginn said at the rally.

Coalition member Eric Upchurch expressed demands, which were met by strong applause from protesters, that city and county leaders pay for all services required by Robinson's family and that Madison veteran police officer Matt Kenny, who fatally shot Robinson, be fired.

"We can't afford to lose another Tony Robinson," Upchurch said.

The state Division of Criminal Investigation is conducting the inquiry into the shooting as part of a state law that requires outside investigation of all officer-involved deaths.

At the rally, Jesse Cole, 19, circulated through the crowd, asking people to sign a petition in line with the same demands as the Young, Gifted and Black Coalition.

"Tony Robinson was my age," Cole said. "This is happening consistently; we can't sit back."

Leaders also emphasized four demands that remain consistent with past coalition protests: the county forgo expanding or building a new jail, investment into black community-led initiatives, the immediate release of 350 black people incarcerated due to crimes of poverty and the end of solitary confinement.

"Things need to change at the level of the system," Stoltz said.

"It's our generation that will be the ones that make the change," Brazas added.

Leaders of the Young, Gifted and Black Coalition call on community members to take to the streets for justice.

From dispatch records, a report of a disturbance and a struggle, followed by an altercation and shots fired.

In mourning shooting victim, friends remember a gentle man loyal to his family

Their portrait was at odds with descriptions by police of Tony Robinson, who they said assaulted an officer during an altercation that led to the officer using deadly force.

The protest brought together labor unions with social justice groups such as the Young, Gifted and Black Coalition.

Demonstrators hold a sign reading Black Lives Matter at a rally in March 2015 in front of Madison's City-County Building.

Protesters wait in line on the steps leading up to the city council chambers to speak in opposition to jail funding at the county's Public Protection and Judiciary Committee Tuesday.