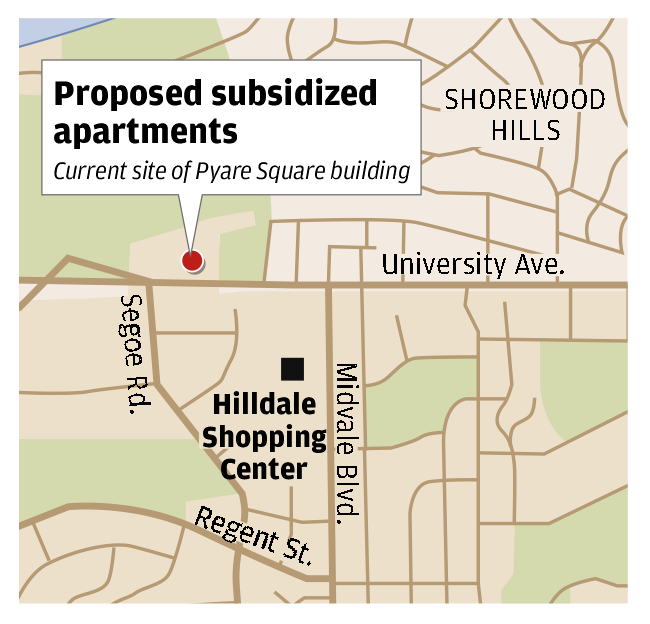 Shorewood Hills discriminated against minorities in February when it rejected a proposed low-income apartment project in the Pyare Square tower, according a federal complaint filed Thursday by the state ACLU on behalf of a village resident.

If the U.S. Department of Housing and Urban Development finds wrongdoing it could disqualify the village from receiving federal funds and seek an order banning any other development for the Pyare Square tower, said Karyn L. Rotker, senior staff attorney for the Milwaukee-based ACLU of Wisconsin.

The Village Board rejected a developer's request for permission to build 69 apartments, saying it lacked time to evaluate the impact the project would have on the mostly owner-occupied lakeside enclave.

"Refusing to allow a developer to build housing that persons of color are proportionally more likely to need and use, especially in a less-diverse community like Shorewood Hills, can be unlawful," Rotker said in an interview. "That's especially true when the rejection of such housing is accompanied by the kinds of sudden changes in rules and priorities, and the negative statements about people who live in affordable housing, that occurred here."

Among the factors that can show a municipality's actions violated federal fair housing laws are disproportionate impact on minorities and perpetuation of racial segregation, Rotker said.

Village Administrator Karl Frantz said he couldn't respond until he had read the complaint.

The ACLU filed the complaint on the behalf of Bill Thomas, a village resident and former Planning Commission member who was among those who argued for approval of the apartments.

"That proposal gave our village a chance to do something about the history of exclusionary practices," Thomas said.

The complaint points to 2000 Census figures showing the village population as 1.4 percent African-American compared to 5.8 percent in Madison.

Thomas said the village board is out of step with village residents.

"Most of the people in Shorewood Hills would be happy to let affordable housing there, but the balance of power is such that it ain't gonna happen unless there's an outside force," Thomas said. "I don't know if this complaint will do any good, but things can't go on the way they have."

Before the proposal was rejected, village officials hired the Vierbicher consulting firm to study the impact.

The study, dated May 5, predicted the village would suffer no serious financial impact from the proposed Section 42 housing, which had been proposed by Andover Hill Investments of Warrenville, Ill. Under Section 42, the state provides financing assistance in return for a commitment to providing housing for lower income people.

The consultants said national studies indicated that Section 42 units almost always have a positive effect on surrounding property values. Numbers of police, fire and EMS calls would be no higher than the village's current rate per housing unit, the consultants said.

Village board members were told before they voted on the project that there would be little financial impact and that any concerns about inadequate fire protection could be addressed in a variety of ways, including mutual aid agreements with nearby cities, the ACLU complaint says.

The ACLU's complaint against Shorewood Hills

Shorewood Hills could have hundreds of new renter neighbors after all

The village board on Feb. 15 voted down a proposed 69-unit apartment building, but now a new developer wants to build a 96-unit apartment house right across University Avenue in the city of Madison.

Representatives from Stone House Development on Thursday presented a plan to neighbors for a 96-unit affordable housing project on the westernmost portion of the Target-Hilldale site.