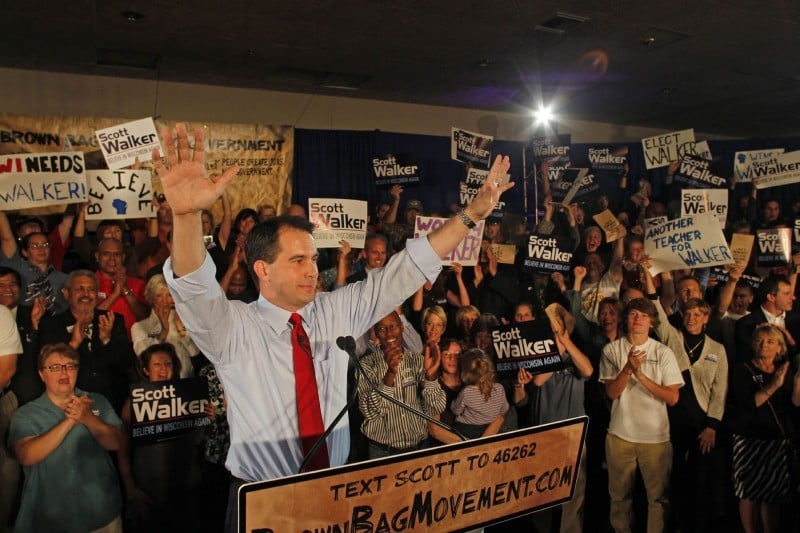 Gubernatorial candidate Scott Walker celebrates with supporters at his primary victory party in Milwaukee in this Sept, 14. 2010 file photo. 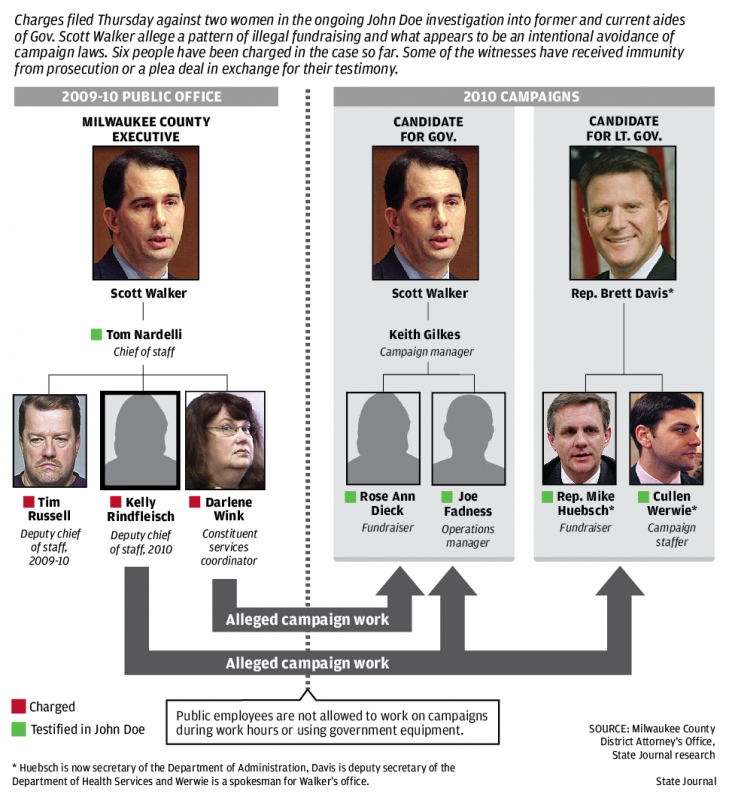 Charges filed Thursday in the ongoing John Doe investigation into former and current aides of Gov. Scott Walker allege a pattern of illegal fundraising and what appears to be a systemic avoidance of campaign laws by Walker's inner circle.

Milwaukee County District Attorney John Chisholm charged Kelly Rindfleisch, 43, with four felony counts of misconduct in public office and Darlene Wink, 61, with two misdemeanor counts of political solicitation by a public employee. Both worked for Walker during his time as Milwaukee County executive, and both are accused of fundraising activities while at their taxpayer-funded jobs.

Also in the complaints made public Thursday were accusations leveled toward Walker's close associates, including the use of personal laptop computers and an unofficial "secret email system" to solicit money for the campaigns of Walker and Brett Davis, who was running for lieutenant governor. Investigators say they kept the system hidden from all but a close group of Walker's insiders.

But perhaps most notable in the complaints is an email from Walker to a longtime top aide discussing the resignation of Wink, who left her county job after admitting to the Milwaukee Journal Sentinel that she frequently posted political comments online during working hours.

"We cannot afford another story like this one," Walker wrote about the Wink story. "No one can give them any reason to do another story. That means no laptops, no websites, no time away during the work day, etc."

Walker was not available Thursday for interviews to clarify what he meant in the email.

"Scott Walker expected everyone to follow the law and made that clear publicly and privately," the statement read.

The probe already has netted one conviction. William Gardner, president of Wisconsin & Southern Railroad, was sentenced to two years of probation after acknowledging funneling at least $72,800 in illegal and excessive campaign contributions to Walker and other candidates.

Milwaukee-area real estate broker Andrew P. Jensen, Jr. was taken into custody last month after refusing to cooperate with the John Doe investigation. He has not been charged.

Wink is accused of arranging fundraisers, "robo-calls" and writing campaign-related press releases in 2009 while working under Walker in the Milwaukee County executive's office.

The counts allege that Wink violated state laws prohibiting solicitation of political contributions in public buildings and banning public employees from soliciting or receiving money or services for any political purpose while at work.

The complaint reveals that Fadness was among those testifying in the John Doe investigation. Other witnesses include Rose Ann Dieck, membership chairwoman for the Milwaukee County Republicans, who has received immunity from prosecution.

Wink's attorney, Peter Wolff, said his client has reached an "anticipated settlement" with prosecutors that would include her pleading guilty and sharing information about future prosecutions and proceedings. For example, she could testify against Russell and Kavanaugh.

"She's clearly adamant that at no time did Scott Walker know that she was doing any of this type of behavior," Wolff said of the accusations against Wink.

Rindfleisch, who worked as a fundraiser for Walker until just weeks ago, started as a policy adviser for him at the county executive's office in early 2010. She was soon promoted to deputy chief of staff, replacing Russell, who left to become Milwaukee County Housing Services director. At the same time she worked as a fundraiser for Davis, then a GOP state Assemblyman from Oregon running for lieutenant governor.

Davis, according to emails uncovered by investigators, was the favored candidate of those trying to get Walker elected governor. Lieutenant governors run separately in the state's primary system but are paired up with their party's gubernatorial candidate for the general election. Many inside Walker's campaign believed Davis gave Walker the best chance to win the election.

Prosecutors say Rindfleisch spent "significant time" doing political campaign work for Davis while working for the county. The criminal complaint against her investigation uncovered 1,380 fundraising emails sent or received by Rindfleisch during normal work hours. Investigators also uncovered about 300 emails between Rindfleisch and Davis and more than 1,000 between her and members of Walker's campaign staff, including spokeswoman Jill Bader and campaign manager Keith Gilkes.

Rindfleisch told a friend that "half of what I'm doing is policy for the campaign," during an Internet chat, according to the 57-page complaint.

Franklyn Gimbel, Rindfleisch's attorney, said he thought the charges against his client were especially harsh and expects to challenge aspects including search and seizure tactics.

"I think they're harsh considering the way the other public officials with far greater rank were treated," Gimbel said. Rindfleisch's first court date is scheduled for Feb. 22.

This was the second time Rindfleisch has been involved in questionable campaign activities on the taxpayer dime. Rindfleisch worked for state Rep. Scott Gunderson, R-Waterford, from 1995 to 1999. In 2002 she was granted immunity for her testimony in the caucus scandal, which involved widespread illegal campaign activities on state time among legislative staffers. The scandal, uncovered by the State Journal, resulted in criminal charges and fines against five lawmakers and four legislative aides.

From the emails and Internet chats collected by investigators, it seems clear that Rindfleisch was aware she was circumventing the law by fundraising with a personal laptop and through a secret system. Several key members of Walker's current administration communicated with her during this time, including his spokesman Cullen Werwie and Department of Administration Secretary Mike Huebsch.

Investigators said another member of County Executive Walker's inner circle, Russell, was responsible for setting up the secret computer system that was used to conceal the fundraising.

The wireless Internet system was, according to the complaints, "never disclosed to county employees outside a closely held group within the Walker administration."

It was so secret that even the county director of information management services was not aware it existed, meaning that even an open records request would not have uncovered the fundraising efforts.

A day after investigators accused his former top aides of using a secret computer system to do political work on the taxpayers' dime, Gov. Scott Walker denied knowledge of illegal activity taking place during his time as Milwaukee County executive.

On the Capitol: Changing minds and changing the subject

With apologies to Winston Churchill, the ongoing John Doe investigation surrounding Gov. Scott Walker is quickly turning into a riddle, shrouded in mystery and hidden in an armoire. Every new revelation just brings more questions.

Walker says he will meet with John Doe prosecutor

Gov. Scott Walker said Friday evening that he will be "voluntarily meeting" with the prosecutor leading the secret John Doe investigation that has already brought charges against some of his top aides.

A woman who worked for Gov. Scott Walker when he was the Milwaukee County executive pleaded guilty Tuesday to misdemeanor charges of working on Walker's gubernatorial campaign on county time.

Ex-chief of staff learned of missing money in 2008.

Depending on your political persuasion, this week's news in the ongoing John Doe investigation either exonerates embattled Gov. Scott Walker or proves he's corrupt.

The ongoing John Doe probe into former and current staff members for Gov. Scott Walker led to the arrests of three men Thursday, with two men facing charges of embezzlement and theft of business and the other for child enticement.

Read all the documents related to the John Doe investigation

Gubernatorial candidate Scott Walker celebrates with supporters at his primary victory party in Milwaukee in this Sept, 14. 2010 file photo.