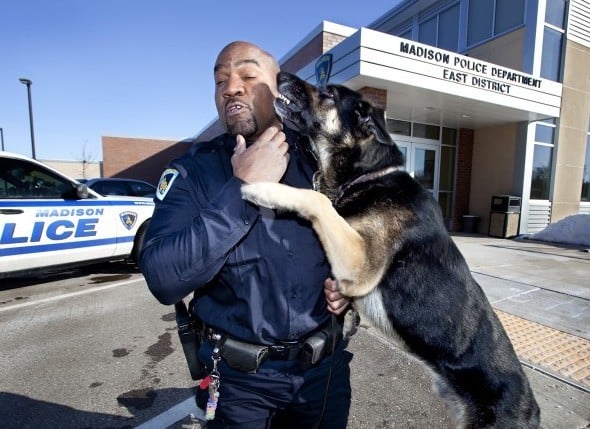 K-9 Ivan gives a kiss to his handler, Madison Police Officer Henry Wilson, who’s been reinvigorated about policing since getting his new partner three years ago. 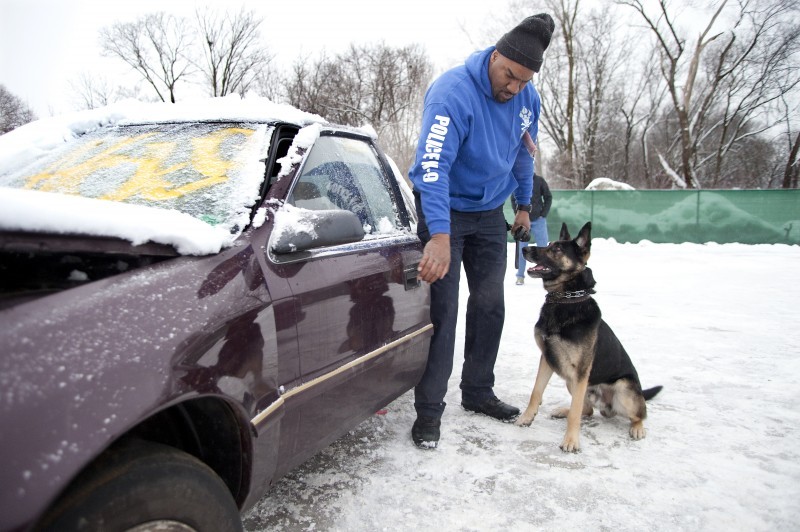 Officer Henry Wilson directs Ivan to search a car for drugs during a training exercise at Schmidt’s Auto on Madison’s South Side. 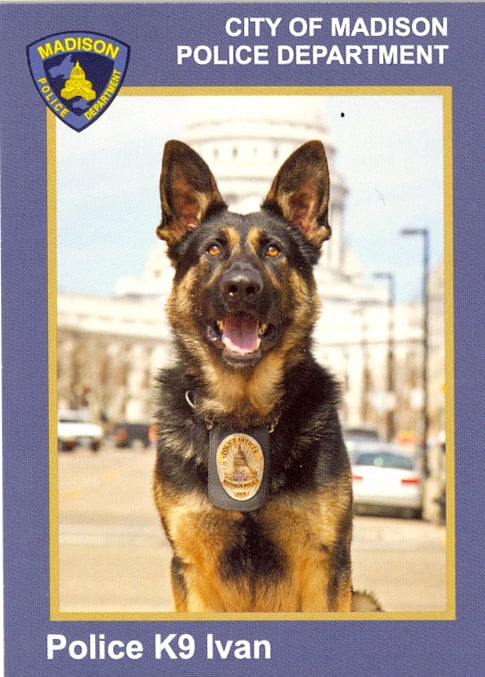 Like an old dog rejuvenated by a frisky puppy, Officer Henry Wilson was reinvigorated about policing when he got a new partner - a 2-year-old German shepherd from the Czech Republic named Ivan.

A 25-year veteran of the Madison Police Department, Wilson, 49, was thinking about retiring before he and Ivan started tracking down robbers and sniffing out illegal drugs three years ago as part of the department's growing K-9 patrol unit.

Now, Wilson says, "I'm staying as long as he stays."

The job does have its perks: "Take-home car, gas - and I get a dog," Wilson said.

At the end of their workday, Ivan goes home with Wilson and accompanies him almost everywhere.

Established in 2005 with support from the nonprofit organization Capital K-9s, Madison's K-9 patrol unit is now the largest in Wisconsin with six dogs, including two new dogs now in training. The department also has its own certified dog trainer, Sgt. Chris Boyd, who helped launch and now leads the unit after serving on the Dane County Narcotics and Gang Task Force with K-9 Arno.

Not only is it rare for a police department to have its own dog trainer, having patrol officers assigned primarily to K-9 duties is beyond the reach of most departments, said Lt. Jay Johnson, canine unit commander for the Greenfield Police Department and president of the Wisconsin Law Enforcement Canine Handlers Association.

Johnson credits community support, including Capital K-9s, for the growth of Madison's K-9 unit at a time when many police departments are cutting back on programs.

Through events such as its annual Dog Paddle, which gives areas pooches the last swim of the season at Goodman Pool, Capital K-9s raises money to pay for each dog, initial training with its officer handler and a designated squad car equipped with a kennel, at a total cost of about $50,000.

The job of a K-9 "is basically to save officers' lives," Johnson said, adding that dogs also locate drugs and other evidence police would never find.

In March 2007, town of Madison K-9 Brando subdued a knife-wielding man who had broken into the apartment of a 21-year-old student and tried to drug her with ether as she slept, then charged down a stairway toward the dog and his handler, Officer Anthony Pucillo.

Dogs can search for evidence and suspects - who might be armed and hiding - more safely and efficiently than human officers can, Wahl said.

"They're doing it by odor," he said. "We have to visually look everywhere."

The mere presence - and ferocious bark - of a police dog is enough to flush out many suspects and to convince fleeing subjects to freeze in their tracks.

But for Wilson, Ivan has done much more.

"I was just tired of the negativity," Wilson said. "People hate you because you're the police ... People forget cops are human, too. That wears on you."

Ivan changed all that. With Ivan at his side, Wilson is welcomed almost everywhere they go, from Scout meetings and nursing homes to the county fair and community gatherings, where they build relationships and break down barriers that can keep people from going to police for help.

"There's nothing better than enjoying to go to work," Wilson says now. "I've died and gone to heaven."

A Milwaukee native, Wilson moved to Madison and was looking for a job at the same time the police department was seeking to increase officer diversity.

As a large - 6 feet 5 inches tall and sturdy - black man, Wilson said, he's always made a conscious effort not to come across as intimidating. But to his own surprise, it took a police dog to make him approachable as an officer.

"All our dogs are very social. You can pet all the dogs," he said, quickly adding, "You still need to ask."

Madison looks for small shepherds, weighing about 75 pounds, that are calm, well-balanced and able to interact with people when they aren't in work mode, Wilson said.

"They didn't want vicious dogs," he said, recalling the imagery of the civil rights era.

But when circumstances warrant, Madison's K-9s have been known to sink their teeth into someone.

"Ivan is very intense when he does his bite work," Wilson said. "It's possible he may have to give up his life for me, although we would never put the dogs in those situations intentionally."

To prevent people from calling him "Ivan the Terrible," Wilson has dubbed him "Ivan the Delightful." But he often calls Ivan by his nickname, "Bubba."

Wilson admits it took some getting used to "the stink and the slob" in his squad car, where Ivan usually rides with his head resting between the two front seats.

And while the job might be all fun and games for Ivan, it takes a lot of work on Wilson's part.

The dogs are continually being trained to perform specific tasks in whatever circumstances they might encounter. After K-9 Gildon tracked down a suspect hiding among goats, the unit headed to a UW-Madison site with cows for one of its twice-monthly trainings, often attended by K-9 handlers from other area police departments with one or two dogs.

"What you want is a dog who will do what you ask him to do out of respect for the relationship, because you are in control," said Wilson, who gives Ivan's commands in Czech.

Ivan's reward is his favorite chew toy - a piece of fire hose that gets replaced daily. "When he gets this and some praise from me, the Alpha, life is good," Wilson said.

But like other handlers, Wilson also has had to learn when to let Ivan lead. "In tracking, I have to give up my control," he said, recalling one early experience when he kept trying to erroneously redirect Ivan, who repeatedly sought a different course.

Like a doting parent, Wilson sees success in all of Ivan's endeavors, explaining the difficulty of putting your nose to concrete that can be hotter than 100 degrees and noting that heat cooks off scent, making it harder to follow a trail.

"His drive is so incredible," Wilson said. "He would keep searching for me until I told him enough."

When Ivan sits down on the job, he's not being lazy. He's signaling he detects the odor of narcotics, as he did after sniffing beneath the doors of several apartments above a State Street bar, whose owners are working with police to address drug-related issues.

Meant for each other

After serving as S.W.A.T. team and drug task force member, a neighborhood and school resource officer, and working on every side of the city, Wilson said, "I wanted to bring something new to me and I thought that I had something I could bring to the canine position."

But he was passed over three times, dating back to the 1990s.

Rather than quit or stay angry, Wilson said, he decided to find out what he had to do, then did it.

"I changed my attitude," he said.

Now Wilson believes everything happened just as it should have.

"This is the dog I was supposed to have," he said.

And it seems the same can be said on Ivan's part. Before being paired with Wilson, Ivan was supposed to go to another department but was passed over after developing an infection on his stomach.

"There was no doubt," Wilson said, "this dog was waiting for me."

Arno — A Dutch shepherd and the Madison Police Department’s first “dual-purpose” dog — serving both as a drug dog and a patrol dog — Arno finds duct tape and other evidence hidden in a cluster of pine trees in a South Side marsh, helping to unravel the truth that missing UW-Madison student Audrey Seiler faked her own abduction in March 2004. Arno won the Wisconsin Law Enforcement Canine Handlers Association “Meritorious Narcotics Find of the Year” award in 2001, 2002 and 2004. He retired in 2006 after sniffing out nearly 130 pounds of marijuana, 12 pounds of cocaine and numerous firearms, and died of prostate cancer a few months later.

Johnny — Weeks after joining the Madison Police Department’s patrol unit, Johnny, a Belgian Malinois, tracks down a disoriented woman in her mid-60s who had been missing for about an hour, taking just minutes to locate her in March 2005. In October 2007, Johnny found a would-be robber who attacked a jewelry-store owner with a hammer hiding in a bathroom in the laundry area of a nearby apartment building.

Greg — In one of the state’s largest drug busts in November 2006, Greg, a Dutch shepherd, sniffs out 90 pounds of cocaine with an estimated street value of $4 million hidden in the floor of an attic in a townhouse on South Gammon Road by indicating he smelled something overhead. Greg recently retired after a five-year career.

Martie — Within two weeks of hitting the streets, Martie, a Belgian Malinois, sniffed out about half a pound of cocaine hidden under a wood pallet in the basement of a West Side apartment building in March 2009.

Ivan — A German shepherd, Ivan tracks the scent of a man who robbed the Red Letter News from the adult bookstore on the Madison’s East Side to an East Mifflin Street garage, where he finds a wallet containing a photo ID used to identify the robber in August 2009. Called in to assist the Stoughton Police Department in December, Ivan tracks an alleged bank robber to a nearby apartment building, where he is arrested after neighbors identify him from a photo.

Gildon — As police search for fleeing suspects in the attempted robbery of a University Avenue liquor store in January 2010, Gildon, a German shepherd, picks up a scent and follows it through a large brush pile, down a narrow alley and over a 4-foot cinder-block wall. Officers scale the wall to find Gildon on top of a 16-year-old suspect buried facedown in the snow. Sgt. Chris Boyd says Gildon, who was pounding the ground with his paws, “was trying to get the ‘rabbit’ out of the hole.”

Madison police K9 Ivan returned home Monday after a six-day stay at the UW Veterinary Care Small Animal Hospital, where he was treated for a near-fatal infection and pneumonia.

Police dog Ivan back on the job after 'miraculous' recovery

K9 Ivan is back on the job after bounding back from a life-threatening illness.

Some achievements of Madison’s patrol K-9s

K-9 Ivan gives a kiss to his handler, Madison Police Officer Henry Wilson, who’s been reinvigorated about policing since getting his new partner three years ago.

Officer Henry Wilson directs Ivan to search a car for drugs during a training exercise at Schmidt’s Auto on Madison’s South Side.