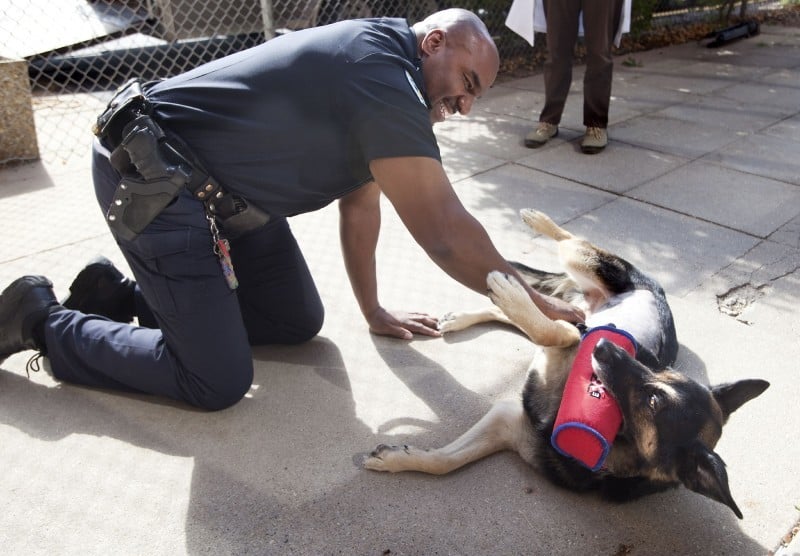 Madison police Officer Henry Wilson plays with his partner, K9 Ivan, on Monday before taking him home from the UW Veterinary Care Small Animal Hospital. "I know he's a dog, but he's my boy," Wilson said. "This is the only dog I have ever loved." 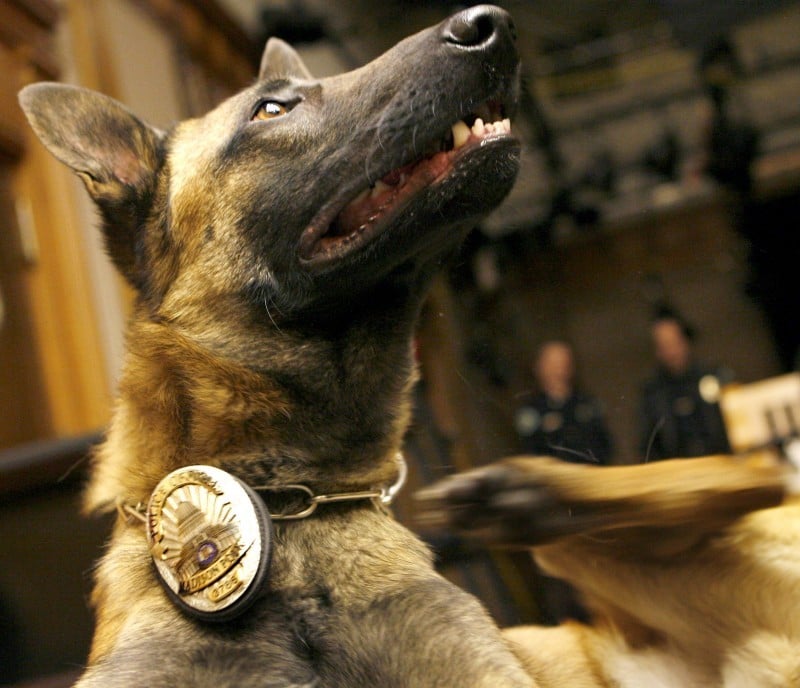 Martie scratches an itch during a news conference announcing the dog as the newest member of the Madison Police Department's K9 team in February 2009.

"Ivan the Delightful" — the Madison police dog credited with reviving the career of Officer Henry Wilson — is taking an early retirement for health reasons. But the bond between the two won't be broken.

Ivan, who will go from police dog to pet, will have to share Wilson's affections with his new partner. Wilson and Sgt. Chris Boyd, the department's trainer who leads the K9 Unit, will travel Thursday to Tarheel Canine Training in Sanford, N.C., to select a new police dog for Wilson.

While there, they will also check out a potential new dog for Officer Rose Mansavage, whose K9 partner Martie also is retiring because of vision problems, Boyd said. Like Ivan, Martie will remain with Mansavage and her family.

Ivan, a German shepherd from Czechoslovakia who turns 7 on Sept. 16, spent six days at the UW-Madison veterinary hospital in October for treatment of a near-fatal infection and pneumonia. A few months earlier, he was diagnosed with fluid on his brain, and the drug used to treat it weakened his immune system and masked the symptoms of the infections that spread through his body.

After a recovery Wilson termed "miraculous," Ivan returned to duty Nov. 22. But since then, Wilson said, the fluid has spread to his neck and spinal cord, affecting his rear legs.

The inflammation is being controlled with medication, he said.

"He seems happy," said Wilson, who is "optimistic" about Ivan's prognosis.

Wilson, 52, a 28-year veteran of the department, credits Ivan with rejuvenating his policing career since the two began working together in 2007.

In his five-plus years on the force, Ivan has sniffed out marijuana growing operations, tracked robbers as well as an Alzheimer's patient who wandered away from home, and flushed out criminals with his bark alone. But Wilson said he's most proud of Ivan's demonstration work in the community, especially his gentle interactions with nursing home residents.

If he couldn't keep Ivan at home along with a new K9 partner, Wilson said he would have sought another assignment. "I actually love Ivan," he said. "He's very much a part of who I am right now."

Martie, a 4-year-old Belgian Malinois who joined the force in 2007 and excelled in building searches, has developed day blindness, which is uncommon for the breed, Boyd said.

"It's kind of a sad thing to see dogs retire early," Boyd said, adding, "When new puppies show up, it always tends to make things better."

Khari Sanford, who is accused in last year's fatal shooting of a married couple, wrote a letter to the judge in his case earlier this month. A trial is scheduled for May.

Two Afghan men staying at Fort McCoy in western Wisconsin were charged Wednesday with committing unrelated crimes while staying at the base.

A Columbia County Sheriff’s Deputy was led on a chase on Highway 16 starting near Lewiston but was unable to catch the car even at 115 mph. When the car came to a stop, two people fled the car and into a cornfield.

Another pedestrian was killed by a vehicle on East Washington Avenue in a crash Monday night, Madison police reported.

A head-on collision Friday between a dump truck and a 2003 Chevrolet Impala resulted in the death of a Portage woman, according to the Sauk County Sheriff’s Office.

A Lodi man is charged with reckless homicide after a man fell out of the bed of a pickup truck during a bachelor party in the town of Armenia in 2019.

A Pleasant Prairie Police officer who stopped to help three people pushing a disabled car found it was a group of kids, one of whom was armed with at least one gun.

A Fitchburg man is facing three felony charges in Columbia County after an altercation with police following an incident at a Wisconsin Dells bowling center.

It isn't clear if officer Joseph Kurer had been vaccinated against COVID-19. The police department said that it doesn't provide details on an employee's medical conditions or vaccination status out of respect for their and their family's privacy.

Madison police Officer Henry Wilson plays with his partner, K9 Ivan, on Monday before taking him home from the UW Veterinary Care Small Animal Hospital. "I know he's a dog, but he's my boy," Wilson said. "This is the only dog I have ever loved."

Martie scratches an itch during a news conference announcing the dog as the newest member of the Madison Police Department's K9 team in February 2009.