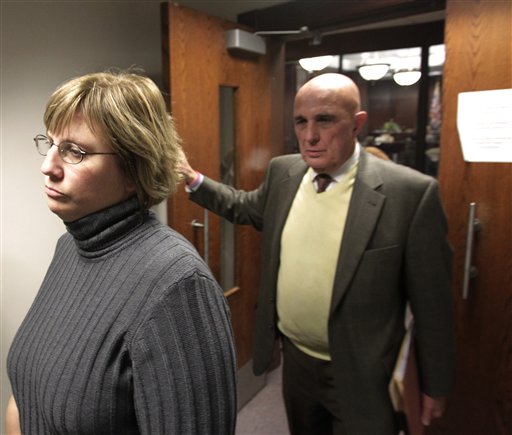 Kelly M. Rindfleisch, left, leaves the Milwaukee County courtroom Thursday, Oct. 11, 2012, with her attorney Frank Gimbel after pleading guilty to charges she conducted campaign work as an aide to Gov. Scott Walker when he was Milwaukee County executive. Rindfleisch pleaded guilty to a single count of felony misconduct in a deal with prosecutors to settle allegations she did campaign work on the taxpayers' time. 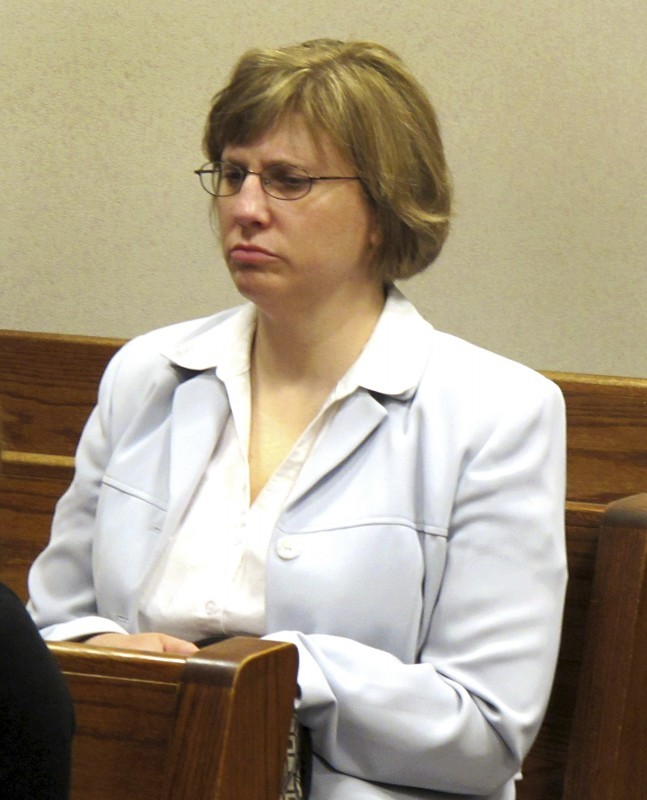 MILWAUKEE — A former aide to Gov. Scott Walker pleaded guilty Thursday to felony misconduct in public office for doing campaign work out of Walker's office while he was serving as Milwaukee County executive.

Kelly Rindfleisch first tried to enter a plea of no contest to the charge, but Milwaukee County Circuit Judge David Hansher said he would not accept that.

"It's been the consistent policy of the court that it's either guilty or not guilty," Hansher said in court. "When a person pleads guilty, they're accepting responsibility."

Prosecutors are recommending probation and jail time, but no prison time or fines. She will be sentenced on Nov. 19.

The conviction "sends the message that campaign fundraising in a government building on government time is a Class I felony and will be vigorously prosecuted under any circumstances, whether a Democrat or a Republican is involved," Assistant District Attorney Bruce Landgraf said.

Rindfleisch, 43, served as Walker's deputy chief of staff in Milwaukee County in 2010 and spent much of her time at her taxpayer-funded job doing campaign work for Brett Davis, a Republican state representative who was then running for lieutenant governor, as well as Walker, her criminal complaint said. Rindfleisch, whose desk was about 25 feet away from Walker's office, frequently used a secret wireless Internet system to communicate with Davis, Walker campaign staffers and other campaign workers, according to the complaint.

Walker had been subpoenaed to appear as a witness in Rindfleisch's case, first by prosecutors, then by the defense. Her plea agreement spares him from taking the witness stand and testifying in open court.

"This case was never about Gov. Scott Walker," Landgraf said. "It was always about Kelly Rindfleisch."

During the hearing, Hansher asked Rindfleisch whether she understood that as soon as she pleaded guilty and he entered a judgment of conviction she would not be allowed to vote until she completes her sentence.

During the hearing, Rindfleisch's attorney, Franklyn Gimbel, asked Hansher to stay the conviction until Nov. 7 so that she could vote in the Nov. 6 election. Hansher declined.

"If I do it for you, I'd have to do that for other people who come before me in the next month," he said. "And I'm not going to do that." Landgraf said Rindfleisch has been "cooperative throughout the proceedings," but did not comment on why the plea agreement did not require her continued cooperation, or whether that was part of her plea.

He said she may be called as a witness in the trial of another former top Walker aide, Tim Russell, who is accused of embezzling more than $20,000 from veterans and their families. Russell's trial is scheduled to begin in early December.

Another former Walker aide, Darlene Wink, has pleaded guilty to a charge related to the John Doe investigation into Walker's former aides and associates. The investigation has already led to charges for six people. Former Walker appointee Kevin Kavanaugh has been on trial in Milwaukee this week.

One of Gov. Scott Walker's former associates was found guilty Friday of stealing more than $51,000 that had been donated to help veterans and their families.

A Milwaukee judge sentenced one of Gov. Scott Walker's former top aides to six months in jail and three years of probation Monday for doing campaign work on the taxpayers' time.

Some key players in the John Doe investigation into illegal campaigning at Scott Walker's Milwaukee County office were present during a similar probe involving legislative staff a decade ago.

Former Walker appointee gets 2 years for stealing from veterans group

Convicted of embezzling money from a veterans group, a former associate of Gov. Scott Walker has been sentenced to two years in prison.

The deal, released Wednesday, spares Scott Walker from testifying and is subject to approval by Judge David Hansher.

Capitol Report: Rindfleisch plea deal a missed opportunity to get Walker on the stand? Not quite

Had the governor testified in the corruption case next week, it likely would have been unsensational.

Gov. Scott Walker has been subpoenaed to testify next week in the misconduct trial involving one of his former aides in Milwaukee County.

The Wisconsin Court of Appeals on Tuesday denied a request from a former aide to Scott Walker to block the state from using private emails in prosecuting her for alleged illegal campaign activity.

A timeline of events in the first secret investigation into Scott Walker's office.

Kelly M. Rindfleisch, left, leaves the Milwaukee County courtroom Thursday, Oct. 11, 2012, with her attorney Frank Gimbel after pleading guilty to charges she conducted campaign work as an aide to Gov. Scott Walker when he was Milwaukee County executive. Rindfleisch pleaded guilty to a single count of felony misconduct in a deal with prosecutors to settle allegations she did campaign work on the taxpayers' time.