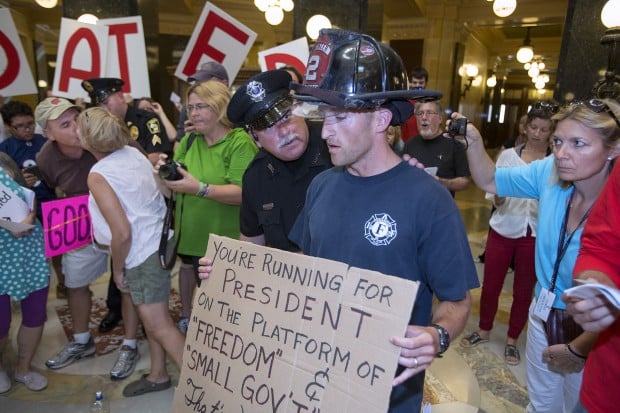 A Capitol Police officer talks with Madison Firefighter Ted Higgins before arresting him Monday for participating in a protest at the Capitol rotunda without obtaining a permit. The arrests have taken place for nearly four weeks. 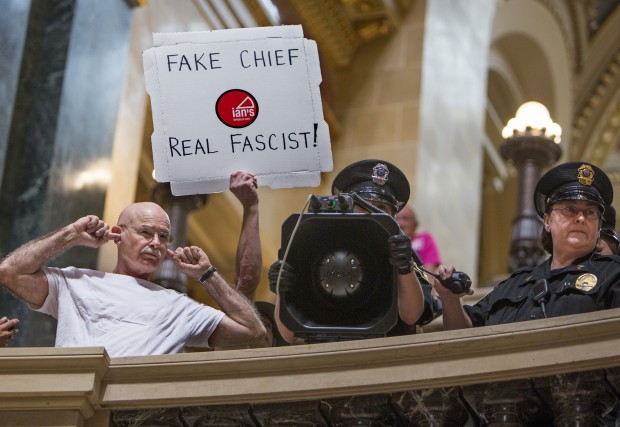 Louis Miller of Madison plugs his ears during the announcement by Capitol Police that the Solidarity Singers' gathering Monday was an unlawful assembly. 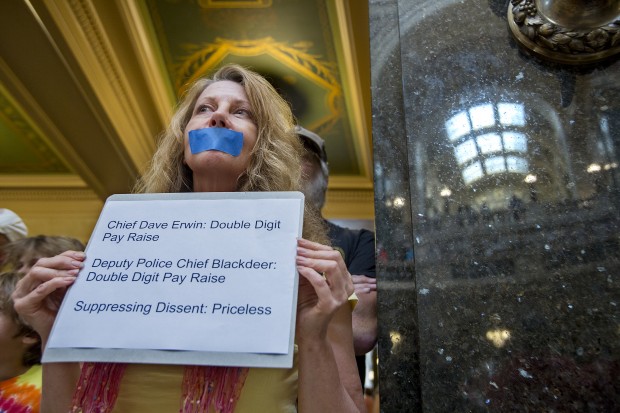 Susan Shoemaker of Madison protests during the Solidarity Singalong on Monday at the State Capitol.

Participation in the noontime Capitol protest against Gov. Scott Walker continued to crescendo Monday despite nearly four weeks of almost daily arrests for gathering in the rotunda without a permit.

New participants, many of them from local police and firefighters unions, said last Thursday’s arrest of a journalist, a Madison City Council member and a 14-year-old girl encouraged them to join the more than 2-year-old Solidarity Singalong.

“That to me was the last straw,” said Brian Austin, a Madison Police officer. “It just seemed absolutely absurd to me that this is happening in Wisconsin.”

Department of Administration spokeswoman Stephanie Marquis said the position was posted last year at an incorrect pay rate, and the raise was meant to bring it to the same level as former Chief Charles Tubbs.

Susan Shoemaker, a Madison writer, wore tape over her mouth and held a sign noting the pay raises for Erwin and his top deputy and ending with “Suppressing dissent: Priceless.” She said she didn’t buy the DOA’s explanation about the raise.

“That was end pay, not starting pay,” Shoemaker said.

Jonathan Rosenblum, a local lawyer and frequent participant in the singalong, said protesters already distrusted Erwin for the crackdown that began last fall and comments he made before last Sept. 11 that the group was “terrorizing people at the Capitol.”

“There’s certainly a lot of concern that Chief Erwin was brought in for purposes of a hard crackdown on democracy,” Rosenblum said. “There had been an ethic of community policing that was productive” under former Chief Tubbs.

Erwin was moved into an executive position at DOA for a day and then moved back into his civil servant position with an 11.7 percent pay increase to $111,067.

“He’s not being paid for performance, because Chief Tubbs did a better job,” Beil said, noting that Tubbs personally mediated disputes during the 2011 mass protests at the Capitol.

About 150 people joined the singalong on the ground floor of the rotunda Monday, while about 125 watched or participated from the first floor balcony, both about twice the usual number.

There were 21 citations issued for no permit, Marquis said.

Police have issued 287 citations since July 24 mostly for gathering without a permit. Last week Matt Rothschild, editor of the Progressive Magazine, was arrested while photographing someone else being led away by police. He was taken to the Dane County jail, fingerprinted and charged with obstructing.

“It’s not about me,” Rothschild said. “It’s about the increasingly hostile attitude that Walker’s cops have toward the First Amendment and basic American freedoms. … Plus, I’m concerned that the cops are getting jumpy and that someone’s going to get hurt.”

Ald. Mark Clear also was arrested Thursday and cited for not having a permit. Betsy Starkey, of Stoughton, the mother of the 14-year-old who was arrested last week, described the arrests as an “abuse of power.”

“A person should not have to get a permit from the government in order to gather to protest that government,” Starkey said.

It’s a common refrain among the protesters and one constitutional scholars have disputed, noting the U.S. Supreme Court has upheld the ability of government to regulate the time, place and manner of demonstrations.

Shortly before the arrests began, a federal judge temporarily ruled that the state’s permitting policy for groups of fewer than 20 was unconstitutional but left in place the rules for larger groups.

Singers say they are acting as individuals, not a group. They also object to the state’s policy that a permitted group be held liable for the actions of all group members. On a few occasions in recent weeks when someone has applied for a permit to sing or observe, police haven’t made arrests. But when there is no permit, police have arrested about 22 people a day.

Not all participants are arrested, and there isn’t a discernible pattern to who gets arrested, though police appear to target singers nearest whichever entrance they choose to enter the space.

At noon, police place a sign in the rotunda warning singers that if they number more than 20 they could face arrest. Not long after singing begins, police broadcast a recorded declaration from Erwin that the event is unlawful. And once they engage a singer they typically give the participant one last chance to leave or face arrest.

Each day at about 1 p.m. the remaining singers, many of them people who received tickets that day, chant, “We’re still here.”

Huebsch is a party to a federal lawsuit related to the protest, Marquis said. She said police arrest only those who “actively” participate and are limited by available resources, but otherwise declined to comment on police tactics.

Ted Higgins, a Madison firefighter who was arrested Monday, said he put a call out to fellow union members to join him at the Capitol following Thursday’s arrests. After returning from the basement where he was processed and given a $200.50 ticket, he said he plans to plead not guilty in court.

“I don’t think this is the last you’ll see of the firefighters coming to the Capitol,” he said.

A Capitol Police officer talks with Madison Firefighter Ted Higgins before arresting him Monday for participating in a protest at the Capitol rotunda without obtaining a permit. The arrests have taken place for nearly four weeks.

Louis Miller of Madison plugs his ears during the announcement by Capitol Police that the Solidarity Singers' gathering Monday was an unlawful assembly.

Susan Shoemaker of Madison protests during the Solidarity Singalong on Monday at the State Capitol.