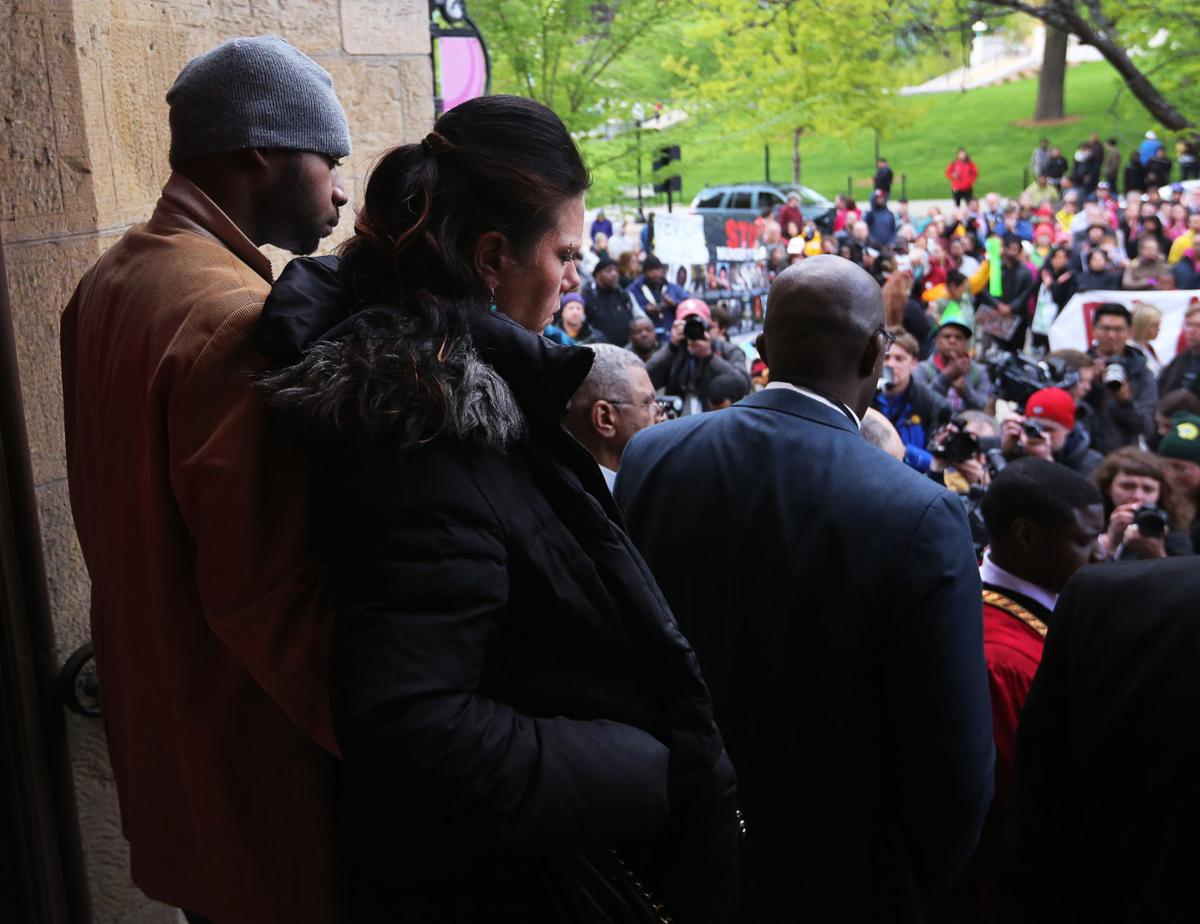 Andrea Irwin, mother of Tony Robinson, and her boyfriend, Jeff Jackson, left, participate in an observance on the steps of Grace Episcopal Church on Capitol Square. 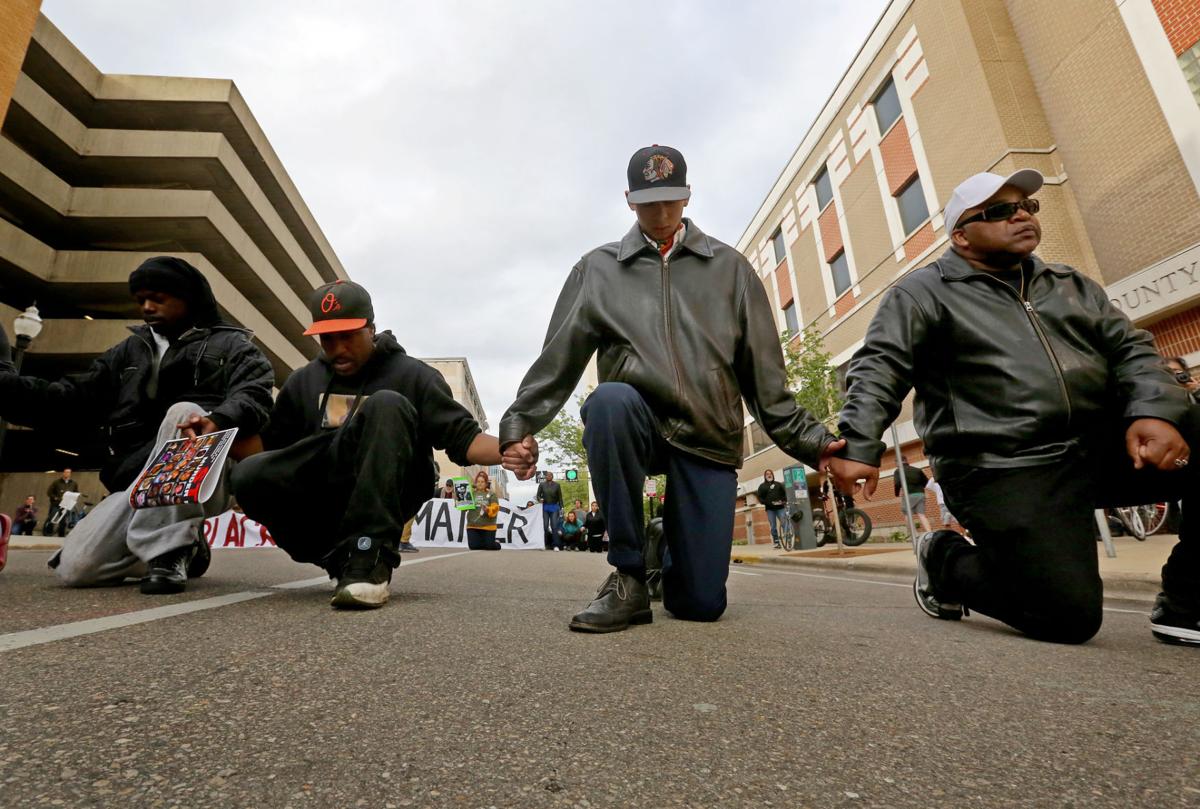 Supporters of Tony Robinson's family pause for a prayer in front of the Dane County Public Safety Building on Tuesday during a march in Downtown Madison. 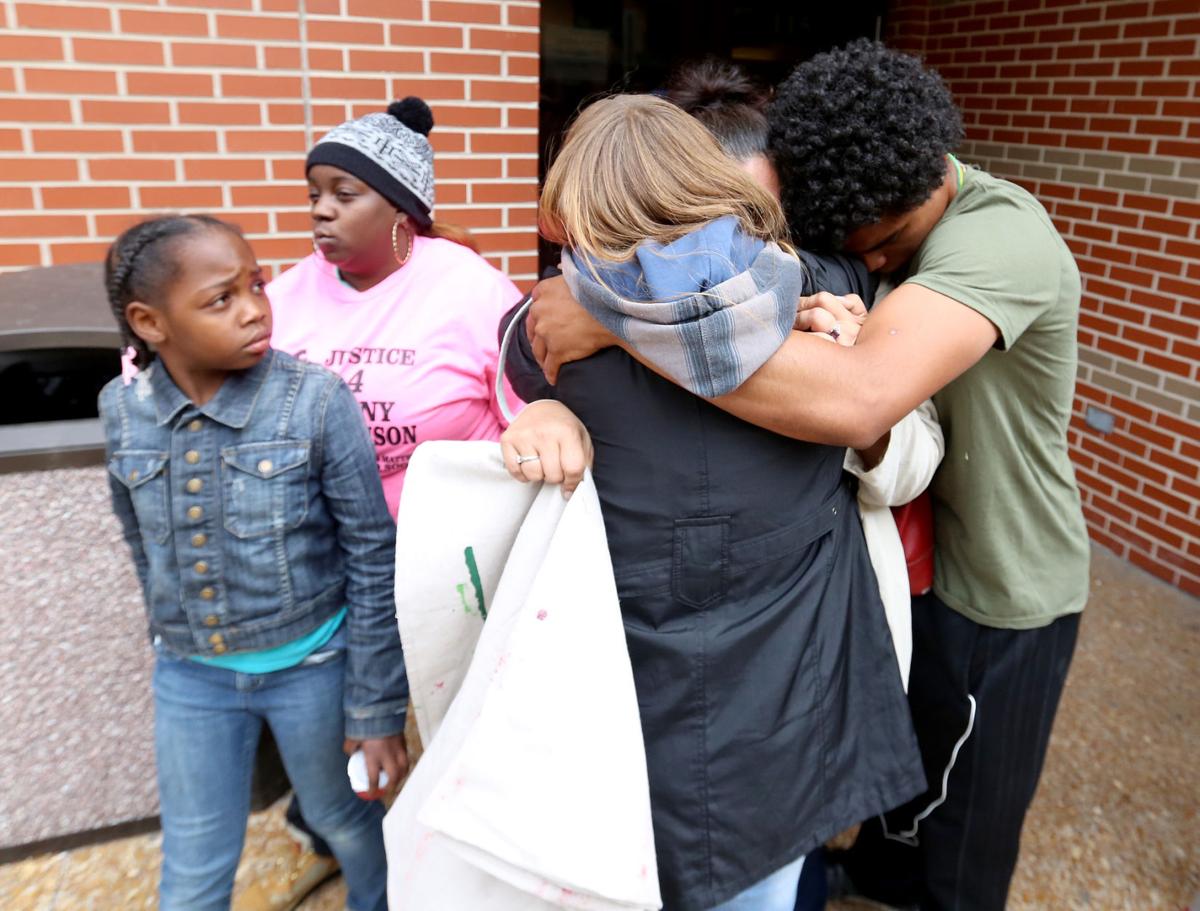 For many of the people who gathered Tuesday outside the residence where Tony Robinson was fatally shot, news that the police officer who shot him would not be criminally charged was both expected and infuriating.

The decision by Dane County District Attorney Ismael Ozanne set off a late-afternoon march from the Williamson Street site to the Capitol Square by a couple of hundred people, with clergy members and young people heavily represented.

It was a peaceful but insistent crowd. The events of the last two months have awakened a movement for racial and social justice that will not soon go away, said the Rev. Everett Mitchell, pastor of Christ the Solid Rock Baptist Church in Madison.

“We will not go back to sleep,” he said.

The crowd likely would have been larger if the Young, Gifted and Black Coalition had put out a call to its supporters. The group has been at the forefront of previous protests but announced it would hold no official events Tuesday “out of respect for Tony Robinson’s family.”

The coalition is planning a protest Wednesday as part of a national event called Black Out Wednesday. In a statement after Ozanne’s announcement Tuesday, the coalition said it anticipated the result but was “extremely disappointed that the criminal system has once again supported the idea that black lives do not matter.”

Ozanne said Madison Police Officer Matt Kenny, who is white, was justified in using deadly force against the 19-year-old Robinson. In 911 calls on March 6, residents reported Robinson acting erratically and battering others. When Kenny arrived on the scene and entered the stairway of the apartment house, Robinson punched him in the side of the head and knocked him into the wall of a stairwell, Kenny told investigators.

The dozens of people huddled together on Williamson Street hovered over cellphones listening to Ozanne’s afternoon news conference. There was no audible reaction when Ozanne rendered his decision, just sadness.

The Rev. Chris Long, a Unitarian Universalist minister, grabbed the hand of Linda Ketcham, the executive director of Madison-area Urban Ministry. They raised their joined fists as Long led “Guide My Feet,” singing, “Guide my feet while I run this race, for I don’t want to run this race in vain.”

As high schools let out around Madison, the crowd on Williamson Street grew, and police temporarily shut down a small stretch of the street to accommodate the gathering. The march to the Capitol began about 5 p.m.

Jordan King, a close friend of Robinson and a voice present at every rally since Robinson’s death, once again took a bullhorn.

“Another life was taken. And not just that, another life was let free, for taking a life,” he said. “We will not stand for this. The DA’s decision has absolutely nothing to do with what’s going to happen in the end. We are going to get justice in the most peaceful and respectable way possible. There will be no violence on our behalf and I can promise you that on my soul. But what I also can promise is there will be justice.”

Sirena Flores, a 17-year-old junior at East High School, grew up just a block away from where Robinson was killed and now lives across the street in an apartment building.

She tearfully urged the crowd to address the reasons that led to Robinson’s death.

“I don’t want to see blood in my street,” she said.

Olga Avendano, 45, said she was disappointed Ozanne didn’t prosecute Kenny. She has lived across from where Robinson was shot for 26 years — she heard the gunfire that night — and said she went to high school with Ozanne, who in explaining his decision said Robinson had drugs in his system, including hallucinogenic mushrooms.

“I don’t think he (made the decision) with his heart,” she said. “He did it out of pressure to protect his job. He’s a good-hearted person but I’m angry he made Tony look like a criminal. He wasn’t. But he made Tony look bad.”

The Rev. Harold Rayford, pastor of The Faith Place Church in Sun Prairie, criticized Kenny, saying the officer should have waited for backup to arrive to restrain Robinson instead of entering the residence alone.

“That’s what I think a reasonable officer would have done,” he said.

Kenny told investigators he went into the house because he heard a disturbance that sounded like someone being assaulted.

Rayford said he hoped the Madison Police Department will view this as an opportunity to change policies toward people who are “amped up on drugs.” The case also should be a cautionary tale to young people about what can happen when you take drugs, he said.

Observances continued into the evening as several dozen people gathered for a vigil at Pres House campus ministry on the UW-Madison campus.

The vigil started with music and candlelight outside before students slowly filed into the sanctuary where they were invited to pin prayers to the walls with Post-it notes.

“I pray for both the Robinson family as well as Officer Kenny and his family that we may all have peace and learn from this event,” one note said.

The vigil attendees, including dean of students Lori Berquam, finished by holding hands in a circle for a Jewish prayer. Hugs and a few tears were shared as many participants took additional time to read the prayers of others.

“For me it was very impactful to go around and see others’ prayers and the ways other people are processing this event, said Madeline Myers, a UW junior from St. Paul, Minnesota. “It was a good reminder of what I should be praying for as well.”

Madison police reported no problems related to protests. On Tuesday morning, the Black Leadership Coalition, a newly formed group, announced it had around 100 volunteer peacekeepers ready to observe protests and intervene if necessary as liaisons between protesters and police officers. By evening, the group’s spokesman, Greg Jones, said just one team of seven or eight people had been deployed.

The same approach will be used Wednesday during protests, with the Urban League of Greater Madison as the base of operations for the volunteers, Jones said. In its statement on Ozanne’s decision, the Urban League raised the issue of disparate outcomes for youth of color compared to white youth in the criminal justice system.

“While we make no attempt to excuse Tony Robinson’s dangerous and aggressive behavior on that afternoon, we believe it is a legitimate question to ask whether the outcome of this encounter would have been different had Tony Robinson been a white, middle-class teen engaged in similar behavior,” the statement said.

Ismael Ozanne announced Tuesday that the shooting was a lawful use of deadly force for which Officer Matt Kenny will not face criminal charges.

Protesters marched from Williamson Street to Downtown on Wednesday calling for justice for Tony Robinson.

Chris Rickert: Black lives matter; black clergy should realize gay ones do, too

Photos: No charges for police officer who shot Tony Robinson

Tatianna Avendano, 20, of Madison, who lives across the Williamson St. apartment where Tony Robinson was shot and killed by Madison police off…

Harold Rayford, pastor at The Faith Place Church in Sun Prairie and president of the Council of African American Churches, says events that le…

The documents were unsealed a short time before the district attorney was to announce whether the Madison police officer will be charged in Robinson's death.

The Tony Robinson decision, a compilation

Events surrounding the fatal shooting of 19-year-old Tony Robinson by a Madison police officer on March 6.

Chris Rickert: Everett Mitchell would be intriguing, if politically unlikely, candidate for Legislature

Mitchell would add some diversity to what is now an all-white crop of Dane County Democratic lawmakers.

Andrea Irwin, mother of Tony Robinson, and her boyfriend, Jeff Jackson, left, participate in an observance on the steps of Grace Episcopal Church on Capitol Square.

Supporters of Tony Robinson's family pause for a prayer in front of the Dane County Public Safety Building on Tuesday during a march in Downtown Madison.