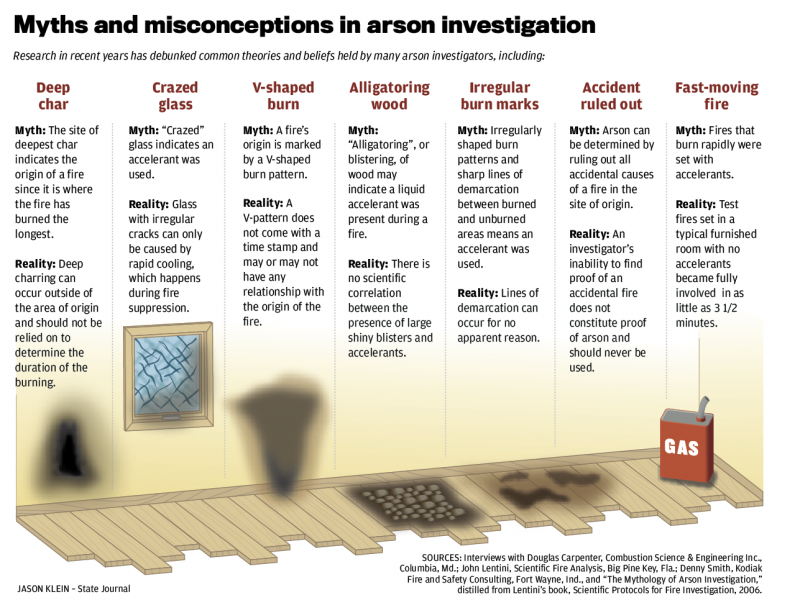 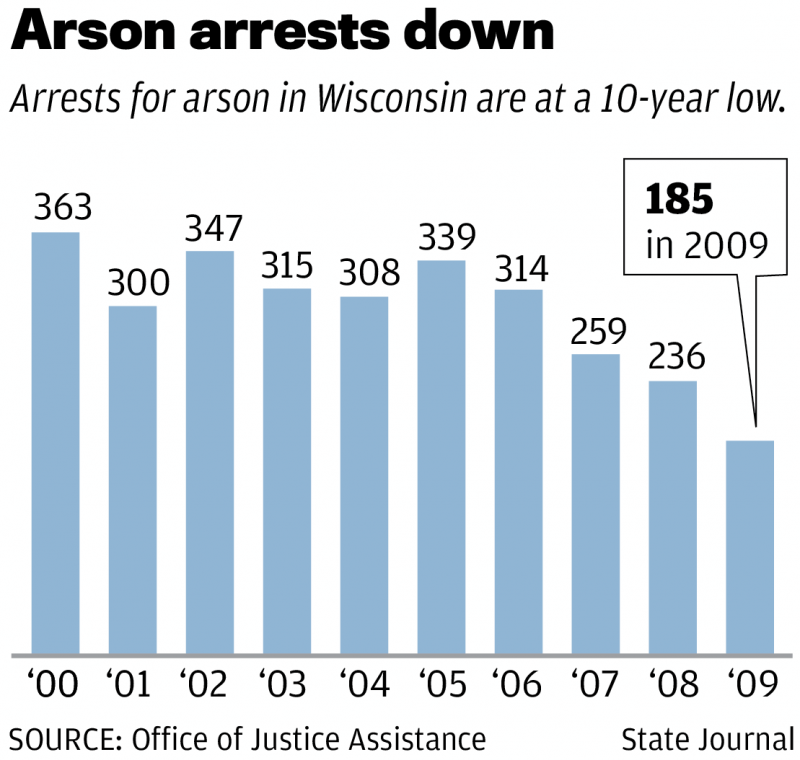 Around the country, defendants in arson cases are challenging their convictions as new research has blown holes in investigators' long-held assumptions about how fires start and spread.

As in the investigation into the fire that destroyed J.J.'s Pub in rural Marquette County on Sept. 11, 2006, many of those investigators work for insurance companies with a stake in the outcome.

John Lentini, a prominent fire investigator and one of the harshest critics of the current state of fire science, said some of the probes amount to little more than "witchcraft and folklore."

He cited a 2005 test designed by the U.S. Bureau of Alcohol Tobacco and Firearms in which fire investigators were asked to identify the general area where two test fires were started in separate rooms. The fires were extinguished less than three minutes after achieving "flashover" — the point when, Lentini says, "a fire in a room becomes a room on fire."

Each time, just three of the 53 investigators got the area of origin right, and it was a different three each time, Lentini said. Subsequent tests have produced similar results.

Another series of test burns in 2008 called into question the widely held belief that V-shaped burn patterns on walls — like the one cited in the arson case against J.J.'s Pub owner Joseph "Joey" Awe —indicate where a fire started. In fact, the markings "bore no relationship to either of the fires' origins, which were approximately six feet from the apex of each ‘V,'" the bureau reported.

Unlike improvements in DNA technology, which have helped police solve more crimes, advances in fire investigation may have had the opposite effect: As knowledge about fire grows, uncertainty about the origin of fires has increased and the number of fires declared intentional has plummeted.

Since 1980, the number of intentionally set fires has been on "a long-term downward trend," currently accounting for about 8 percent of all structure fires, down from about 20 percent 30 years ago, the National Fire Protection Association reported last year. Roughly half a million buildings in the United States are damaged or destroyed by fire each year, the NFPA estimates.

Wisconsin doesn't keep statistics on how many fires are intentionally set. But arrests in Wisconsin for arson have declined steadily over the past decade. In 2000, 363 people in Wisconsin were arrested for allegedly setting fires. By 2009, the number dropped to 185, the Office of Justice Assistance reports.

At least some of the decline, Lentini believes, is because investigators are taking a more cautious approach.

Burning down a building for profit — the crime Awe was charged with — is rare. A search by Court Data Technologies of online court records found 42 people were charged with arson of a building with intent to defraud over the past 10 years in Wisconsin. Cases against 12 either were dismissed or the defendants were acquitted.

In other cases, the new findings are leading to convictions being overturned.

Most recently, a Massachusetts federal judge in November tossed out the conviction of James Hebshie, who was in prison for four years for a 2001 fire in a commercial building housing the convenience store he owned.

The prosecution charged Hebshie set the fire because he was in debt and unable to sell his Taunton, Mass., business. A dog detected the presence of accelerants in Hebshie's burned-out store.

But Lentini listed several items carried by the convenience mart that had the same ingredients as accelerants. And he said investigators had the origin of the fire wrong based on their misreading of a perceived V-pattern. Lentini's examination placed the origin in the basement of the building, not Hebshie's store.

In tossing out Hebshie's conviction, U.S. District Judge Nancy Gertner criticized the lack of science behind the investigation led by that state's fire marshal. She found Hebshie's attorneys ineffective for failing to adequately challenge the government's case.

As in the Awe case, investigators with Hebshie's insurance company and the Massachusetts state fire marshal's office said they conducted independent investigations. But the record showed they worked together to determine the cause and origin of the fire, said Jeanne Kempthorne of Salem, Mass., Hebshie's appeal attorney.

"They have a confluence of interests," she said. "The insurance company is looking to get out from under a policy, and the state fire marshal wants to hold someone responsible for the fire. There was an incredible rush to judgment — a mindset of going onto a scene looking for a crime, not looking for what happened."

In Texas, a state commission recently re-examined two arson convictions, including one against Cameron Todd Willingham, who was convicted of murder and arson for a 1991 house fire that killed his three daughters.

On April 15, the commission issued an 893-page report noting many of the theories used to prosecute the cases — such as the V-shaped burn pattern cited as the origin in the Willingham fire — have been disproved.

Whatever comes of the inquiry will be too late for Willingham. He was executed in 2004.

But private experts contacted by the State Journal about the Awe case raised questions about the thoroughness and accuracy of the state's investigation.

Like Lentini, Douglas Carpenter, principal engineer of Combustion Science & Engineering Inc. in Columbia, Md., questioned the investigators' reliance on the V-shaped burn pattern. Deputy State Fire Marshal Joseph Siehelr and an expert hired by Awe's insurance company pointed to the pattern on a storeroom wall as the origin of the fire. Awe's expert said the pattern likely was created after a flaming roof beam fell into the room.

"The V-pattern may or may or not have any relationship with the origin of the fire," Carpenter said. "In addition, this type of pattern does not come with a time stamp that directly tells you when the pattern was created."

Investigators in the Awe case also cited the deeply charred wood in the same area. Lentini said the ATF test burns showed deep charring can occur after flashover in places other than where the fire started.

"The longer you let the thing burn, the harder it is to tell where the fire started, especially after a roof collapse," Lentini said.

The blaze at J.J.'s Pub burned and smoldered for more than four hours.

Lentini has a list of "red flags" that may indicate an arson has been miscalled. The Awe case appears to raise at least three: lack of a credible motive, a neutral eyewitness who places the origin of the fire other than where investigators say it was, and a defendant whose first tangle with the law involves arson.

A forensic accountant for Mt. Morris Mutual Insurance Co. testified Awe and his wife, Irene Florman-Awe, were in poor financial shape because the bar was losing money and neither one was drawing a salary from the business.

But Awe testified the couple had $26,000 in debt and were receiving more than $3,300 a month in disability and retirement income. The bar, Awe testified, "supported itself. That is what it was (supposed) to do."

Investigators also found $903 in cash and checks in the building after the fire, which Lentini said raises doubt about any financial motive to burn the bar.

And one of the first eyewitnesses to the fire, neighbor Kean Fravel, told a detective at the scene he saw flickers around the video gambling machines, which backed up against a wall that — on the other side — held the bar's electrical panel. Investigators disregarded that report, putting the start of the blaze farther back in the building.

Awe, a disabled veteran of the Persian Gulf war, also had no criminal record - until he was convicted of arson.

Perhaps most important, Siehelr used a form of reasoning known as "negative corpus" in determining the blaze was an arson. Siehelr testified he and the experts paid by Awe's insurance company ruled out all accidental causes in their area of origin, "which leaves no other possible conclusion than for this to be incendiary."

The National Fire Protection Association's Guide for Fire and Explosion Investigations is considered the gold standard in the field. It has been revised for 2011 to add strong language saying such reasoning never should be used.

"It is improper to opine a specific ignition source that has no evidence to support it even though all other hypothesized sources were eliminated," the guide states. In those cases, it says, the investigator must label the fire as undetermined.

Denny Smith of Kodiak Fire and Safety Consulting of Fort Wayne, Ind., a national expert in using the process of elimination in fire investigation, said it's "pretty clear" Siehelr's reasoning "meets the criteria of what shouldn't be done."

Until fire investigation improves, Lentini said, "Errors will be made and defendants will be brought to court charged with serious offenses by people who simply do not know any better."

Relying heavily on insurance company experts is fraught with peril.

Joseph Awe is challenging his arson conviction in U.S. District Court in Madison on the grounds his trial attorney was ineffective, the method…

Flawed forensics may have played a part in the conviction of former Green Bay police officer John Maloney, who is serving a life sentence for …

J.J. Pub’s private insurer bankrolled the criminal inquiry into the fire that destroyed the bar. Witnesses said Joseph “Joey” Awe was nowhere near his bar in Harrisville when the Sept. 11, 2006, blaze started.