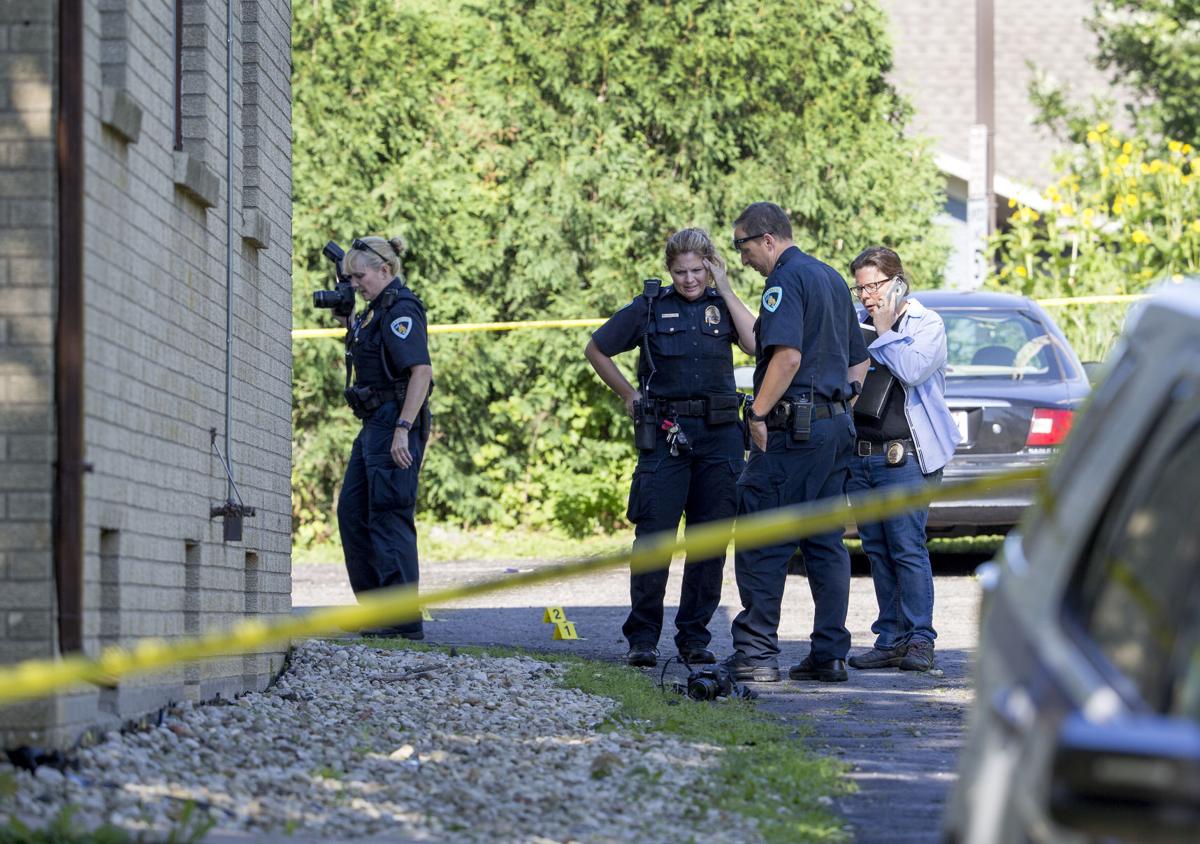 Madison police investigate a fatal shooting of Ciara Philumalee last month on W. Karstens Drive on Madison's North Side. The homicide was the city's ninth this year and the first to involve a female victim. 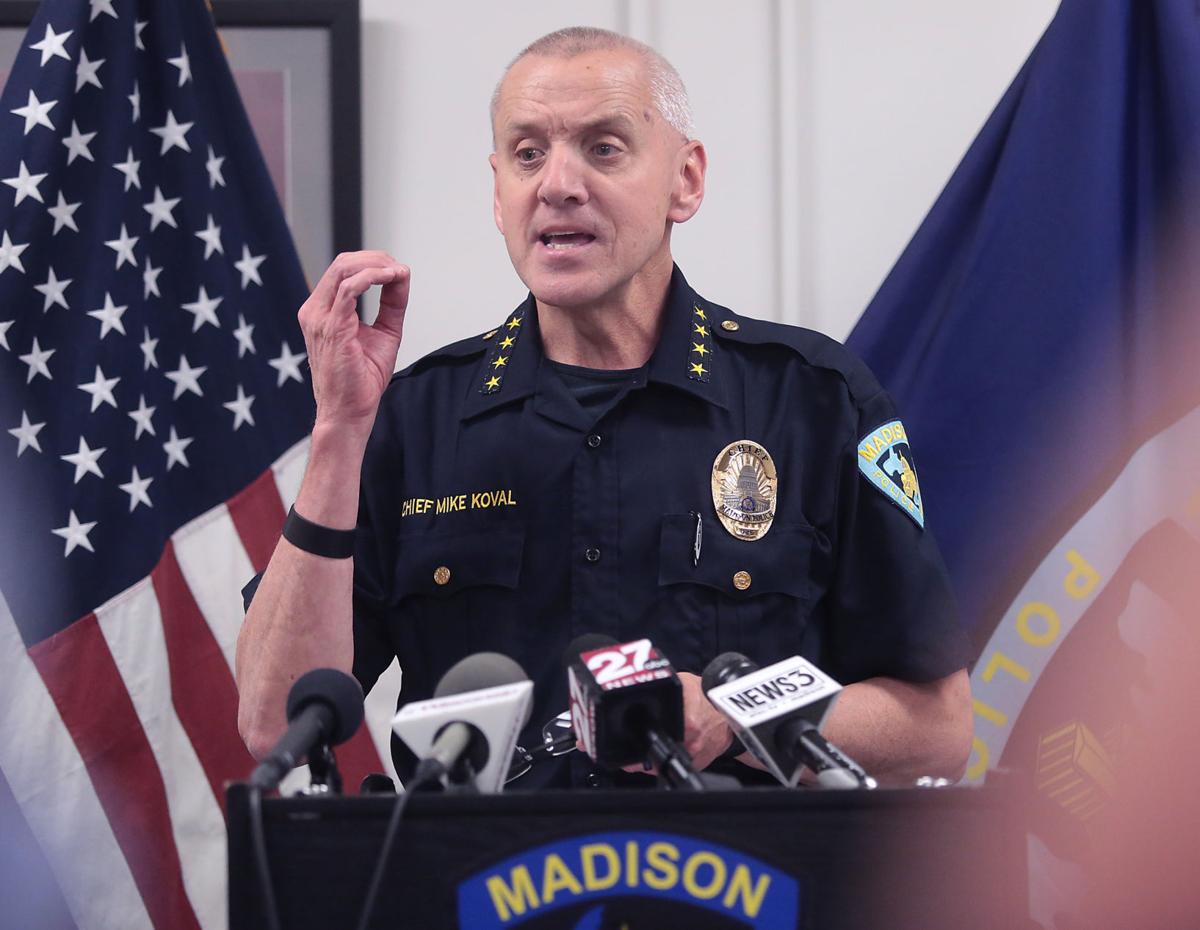 Madison Police Chief Mike Koval delivers remarks during a press conference addressing the death of a construction contractor during an armed robbery at the Culver's restaurant on the south side of Madison on June 27.

A bold short-term plan to remove Madison’s most notorious criminals from the streets was announced by Madison Police Chief Mike Koval Wednesday because they are holding the city “hostage to our fears.”

As the number of homicides and calls for “shots fired” reach record levels with nearly five months remaining this year, “there is an anxiety level in this city that is palpable,” Koval said.

At the top of the most-wanted list are the city’s “most egregious offenders and gang members,” all of whom are currently wanted for various crimes or have broken their terms of probation, Koval said.

The targets at the top of the list also are all African-American. Koval said he received calls Thursday from some people who told him his plan has racist overtones, particularly since less than 8 percent of the Madison population is African-American.

Koval responded by coming to defense of their victims, many of whom were also African-American.

“I’m concerned because people aren’t talking about the disproportionate amount of victims who are African-American,” Koval said. “Rather than always focus on the suspect element of the algorithm, I prefer to look at it from a victim’s lens and when 7 out of 10 are African-American, why is nobody concerned that young, black people are having their lives taken from them?”

Madison Mayor Paul Soglin offered robust support for Koval’s plan and urged citizens to make the city safer by talking to police if they know where any criminals and their guns are located.

“There are 40 to 80 people — principally men — who are flagrantly shooting and killing people and terrorizing an entire city. Tragically, eight of the 10 homicide (victims) this year are African-Americans and, tragically, African-Americans have been involved in all 10 homicides based on who has been charged or are suspects in these murders. That is the reality,” Soglin said.

“I think the chief is fully aware of his constitutional obligations and constitutional responsibilities of the Madison police department. I’m confident they will act within the law and they are going to serve all of us, regardless of our race or income by making Madison a safer place.”

Koval called the plan “an adult version of a mandatory timeout” and the goal is to lock up as many individuals on the list as they can find and scare those they can’t find.

“I want them to know that we are aware of your presence, that you are in and out of all these disturbances. That you aren’t anonymous,” Koval said. “It’s a deterrent. With the vigilantism that is complicit with these crimes, I think they are keeping score. It’s the constant recycled payback.”

The plan is similar to one conducted by Madison police in the spring of 2015 when 12 individuals were arrested in a 72-hour operation, according to Koval. With many of the city’s top criminals in jail, “that bought us, relatively speaking, a quiet summer,” he said.

What is different is that the list includes fresh faces whom Madison police want to steer away from crime. “If we know you’re hanging with three bad guys and you’re getting coaxed and tempted in the peer dynamic and we know about you, there’s nothing that can stop us from going to your door and talking to your mom about how you’re hanging with some real bad guys,” Koval said.

Michael Johnson, the president of the Boys & Girls Club of Dane County, supports Koval’s plan but cautioned the police department not to make racial profiling part of it. “They have to do their jobs to keep our community safe ... but many are concerned that targeting young men and women not associated with crimes will cause frustration and anger among their peers, family and immediate community,” Johnson said.

Koval wrote in his blog that Madison police officers do not want to create a misperception that they are throwing a “blue blanket” over the city to stop or arrest anyone who looks suspicious.

He said later that he also understands why many Latinos and African-Americans who have been pulled over for traffic violations simply because of their race are skeptical of a white police chief telling them that his plan involves looking “for only a few people so the the rest of you can breathe easy. I get it. That’s a hard sell.”

But at the same time, the anxiety level of Madison residents has risen with each of the 10 homicides that have occurred in the city so far this year and each of the 124 calls for “shots fired” through last Sunday, which is a 75 percent increase from last year at the same date, Koval said. “Everybody is saying, ‘What are we going to do?’”

Everybody includes criminals, some of whom have targeted Madison because of a perceived light stance toward violent crime, according to Madison Ald. Paul Skidmore.

“Some believe we should solve this with social programs, that the police should stay out of it. My response is: How many more bodies have to be stacked up before we do something to stop this?” said Skidmore, who represents District 9 on the Far West Side. “The City Council is the problem. The other things are not working and the bad guys know this. The actions of and inactions of the City Council are enabling them and it’s only going to get worse if we don’t do something about it.”

Koval supports the social reform initiatives that have been hallmarks of the City Council over the years. “The only problem is that it has a delaying gap,” Koval said. “The gap is what is most important now because people are getting shot at. So whatever those programs could arguably assist with in the long term aren’t going to be responsive to what is happening right now in real time.”

Johnson said just arresting people won’t solve the rising level of violent crime in the city. “If you shoot somebody, you should lose your freedom. There should be no debate,” he said. “But I also think we have to be careful that we don’t generalize and put all young black men who live in marginalized communities in this terrorist or gang bucket. I think that is why some are concerned about the overtone of the message that is being portrayed.”

Soglin believes Madison deserves credit for taking “extraordinary steps” over the years to “deal with the inequities in our society” and improving housing, employment, academic performance and job training and other factors for minorities.

“Despite all these efforts, we have young black men disproportionately killing other young black men and it has to stop,” Soglin said. “My greatest frustration used to be Madison businesses and Madison community leaders who gave lip service to creating equity but not performance. They have stepped up.

“Now my greatest frustrations are residents of our community who have knowledge of these murderers and terrorists and are not stepping forward.”

What do you think of Chief Mike Koval's plans to round up Madison's worst criminals?

Map: Gun crime incidents in Madison so far this summer

This map shows locations of reported gunfire and gun-related crimes in the city of Madison since May 2017.

When he was in his early 20s and living on Chicago’s West Side, Michael Johnson found himself running from the barrel of a gun.

At least one person forced his or her way into a home but fled when confronted by the resident who was in the home at the time.

I have no idea whether the people targeted for attention have enough better angels left for the attention to make any difference.

Madison police investigate a fatal shooting of Ciara Philumalee last month on W. Karstens Drive on Madison's North Side. The homicide was the city's ninth this year and the first to involve a female victim.

Madison Police Chief Mike Koval delivers remarks during a press conference addressing the death of a construction contractor during an armed robbery at the Culver's restaurant on the south side of Madison on June 27. 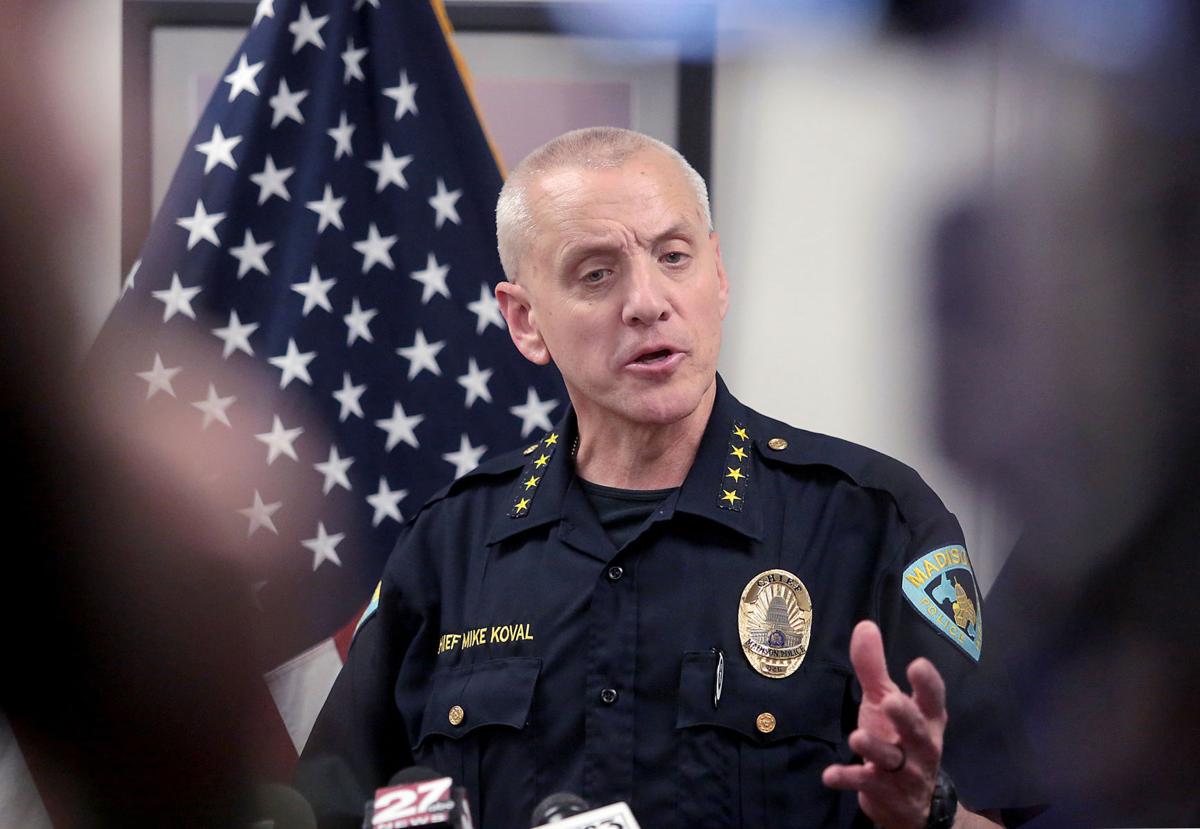