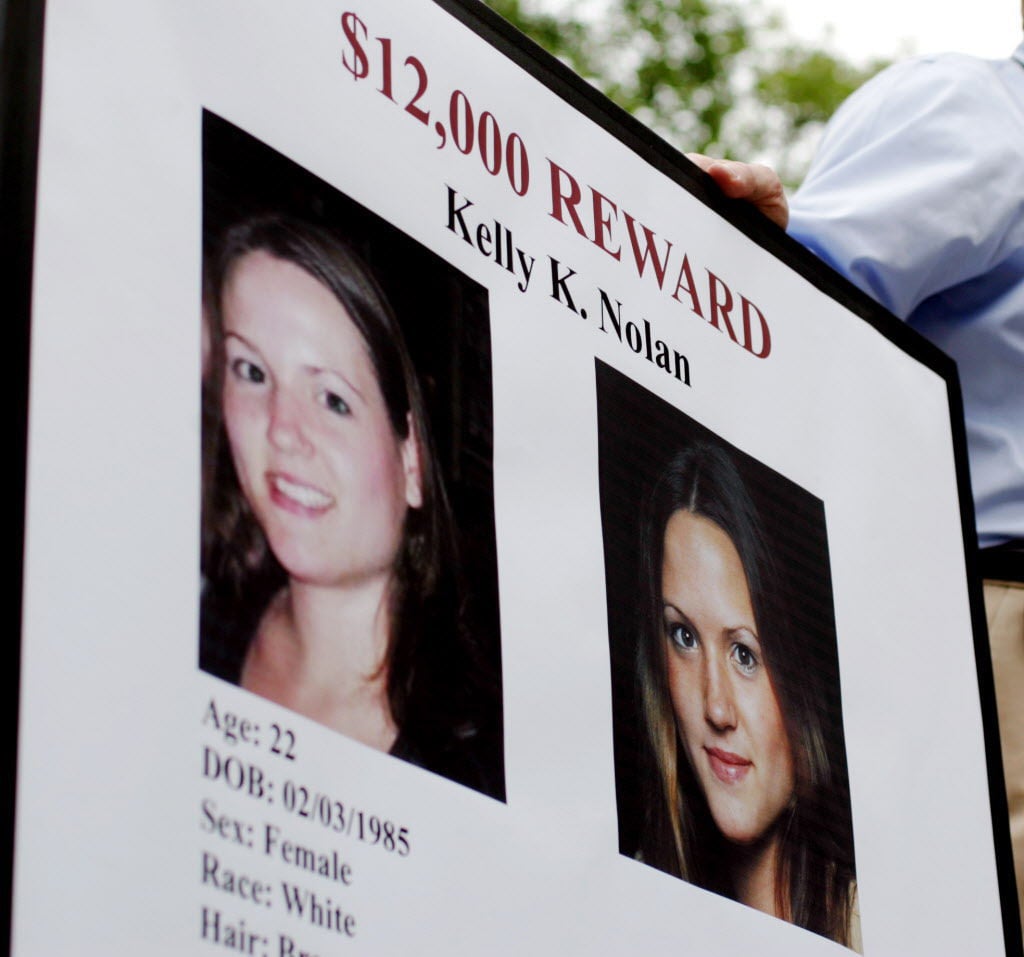 Madison police and the family of Kelly Nolan appealed Thursday for anyone with information into the homicide of the 22-year-old UW-Whitewater student to come forward. Nolan was last seen in the Downtown area on June 23, 2007, and found dead near Oregon on July 9. The case remains unsolved. A September 2007 reward poster is pictured. 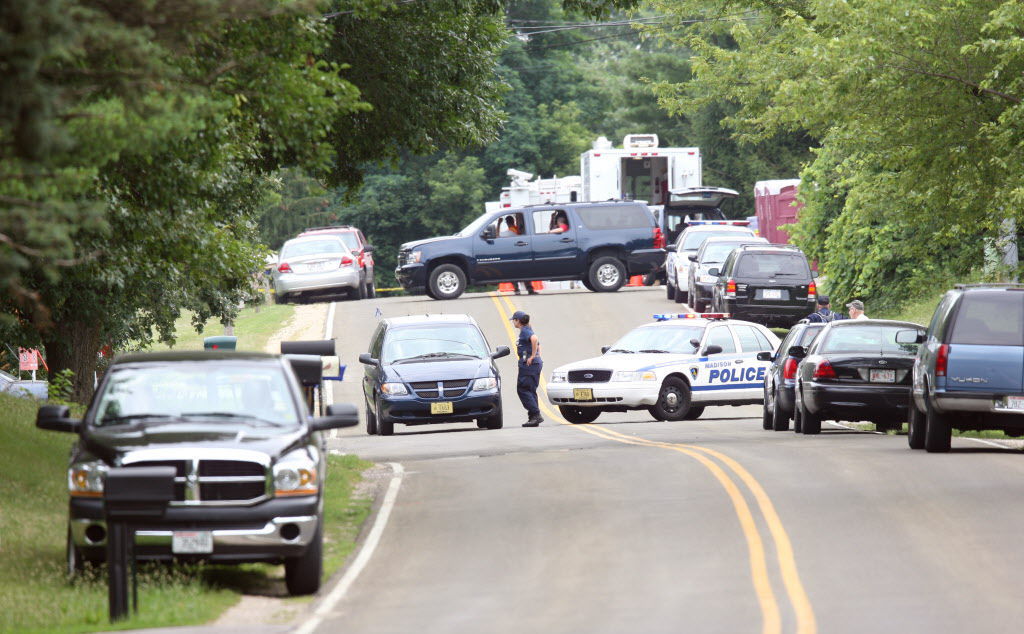 Police block off Schneider Drive, just northeast of Oregon, after finding the body of Kelly Nolan on July 9, 2007, in a densely wooded area. The 10-year-old case remains unsolved, but family members and police are appealing for anyone with information to come forward.

A decade after a 22-year-old UW-Whitewater student disappeared from Downtown Madison and was found murdered 16 days later, police and family members are appealing for help to solve the homicide.

Kelly Nolan was last seen in the State Street area in the early morning hours of June 23, 2007, after a night out with friends. A pinged cell phone and police dog led law enforcement to find Nolan’s body on July 9 in a densely wooded property in the 4700 block of Schneider Drive just northeast of Oregon.

“The passage of time in no way diminishes the heinousness of the crime, the guilt of the criminal(s), nor the need for accountability,” family and friends of Nolan said in a statement. “We and the authorities believe there are people in this community and elsewhere, reading this today, who can shed light on what happened to Kelly if they will only reach out and tell someone.”

Nolan’s death was the first of three high-profile homicides in the Downtown area within 10 months, only one of which has been solved.

Madison police spokesman Joel DeSpain said Detectives Pat Green and Joel Peterson, the latest to be assigned to the Nolan case, have been working on it for about a year and a half. Over the past 10 years, a series of detectives have spoken with hundreds of people about the case, DeSpain said.

Madison Police Chief Mike Koval said the current detectives are looking through the “enormous file” to find any loose ends or things that need to be reconciled.

“Sometimes (a case) becomes almost so familiar that you don’t look at it from a nuanced standpoint that a fresh set of eyes may have,” Koval said. “You’re leaving nothing to chance or you’re not relying on previous relied upon assumptions.”

In the statement, Nolan’s family described Kelly as a “very special and unique human being,” and implored those who remember any information, “no matter how small or insignificant,” to contact the Madison Police Department.

The Waunakee native, who was a senior at UW-Whitewater studying communications, was living in Madison on Mifflin Street for the summer to work.

DeSpain said witness accounts have Nolan last being seen on the 500 block of State Street between 2:20 a.m. and 2:30 a.m. on that Saturday. But a lot is unknown about her death, including the number of people involved, if the person or persons involved knew Nolan, and whether she left Downtown on her own accord or forcibly, DeSpain said.

“It’s never been a cold case for us,” he said. “Maybe there is someone out there whose conscience after this number of years is starting to bother them.”

DeSpain said police believe Nolan went to the area off Schneider Drive in the town of Dunn after leaving Downtown.

Koval said forensics techniques, such as DNA processing, have improved since 2007, and investigators will look to take advantage of those advancements.

Since the initial investigation, little information has been released. But Nolan’s death certificate was amended in 2014 to note she died from “homicidal violence” including “blunt force trauma of torso with fractures.”

DeSpain said persons of interest have previously been investigated and eliminated from the case. Currently, no one has risen to the level of a person of interest or suspect, he said.

The annual Oregon Summer Fest, held about three miles from where Nolan was found, occurred the weekend of her disappearance. While it isn’t believed she attended the festival, DeSpain said detectives have looked into anyone with connections to Downtown Madison and Summer Fest, people with connections to Downtown Madison and Schneider Drive, and anyone connected to UW-Whitewater and Schneider Drive.

“Why did she end up on Schneider (Drive)? Was that just happenstance or did someone have some familiarity with that area?” he questioned.

“He continues to work with the family and to provide us with any information he can come up with,” DeSpain said.

Anyone with information can call Madison Area Crime Stoppers at 608-266-6014.

Nolan’s death was followed by the murder of Joel Marino during a robbery at his West Shore Drive home in January 2008 and the stabbing and strangulation death of UW-Madison student Brittany Zimmermann in her West Doty Street apartment in April 2008.

The Marino case is the only one of the three that resulted in a conviction.

“An unresolved homicide is a crime against all of us,” Koval said. “We absolutely feel like we can still find the killer or killers of Kelly Nolan, and that’s our intent.”

“We abolsutely feel like we can still find the killer or killers of Kelly Nolan, and that’s our intent.” Madison Police Chief Mike Koval

Here are Madison-area crime reports from the last 30 days. Only incidents with specific locations are included. Click on the location markers …

The Kelly Nolan murder case has taken many turns over the years but remains unsolved. The 22-year-old UW-Whitewater student disappeared from D…

A federal appeals panel has affirmed that Brendan Dassey, a Wisconsin inmate featured in the Netflix series "Making a Murderer," was coerced into confessing and should be released from prison.

Madison police and the family of Kelly Nolan appealed Thursday for anyone with information into the homicide of the 22-year-old UW-Whitewater student to come forward. Nolan was last seen in the Downtown area on June 23, 2007, and found dead near Oregon on July 9. The case remains unsolved. A September 2007 reward poster is pictured.

Police block off Schneider Drive, just northeast of Oregon, after finding the body of Kelly Nolan on July 9, 2007, in a densely wooded area. The 10-year-old case remains unsolved, but family members and police are appealing for anyone with information to come forward. 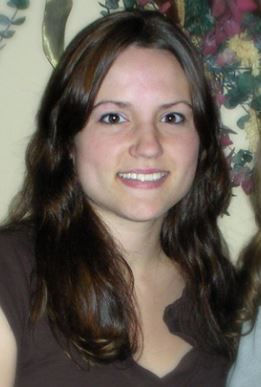