It’s not clear what lawsuit or complaints the board is referring to in the statement released to the Wisconsin State Journal. Board members and police chief Wade Engelhart did not respond to requests for comment. A search of online state and federal court records did not turn up any recent litigation against the village or its police department.

In an online meeting Feb. 1, the board voted 5-2 to abolish the department and contract with the Dane County Sheriff’s Office for police coverage, going against the wishes of the vast majority of residents who spoke during the meeting. Engelhart complained he’d only learned of the plan three days before.

Statements from the board and village president Brit Springer attributed the decision to difficulty recruiting officers generally and increased litigation against police officers and departments around the country, especially in small communities. Nothing in Springer’s statement hinted at any specific complaint leveled against the village.

On Tuesday, the board said it had received a number of questions about its decision.

“Because the Village faced and resolved a recent lawsuit over alleged Brooklyn Police Department wrongdoing as well as unresolved Brooklyn PD personnel issues and complaints, the Village’s future potential liability needs to be minimized to safeguard the taxpayers against significant future costs,” its statement says. “By contracting with DCSO, the Village of Brooklyn’s potential liability stemming from policing becomes ZERO.” 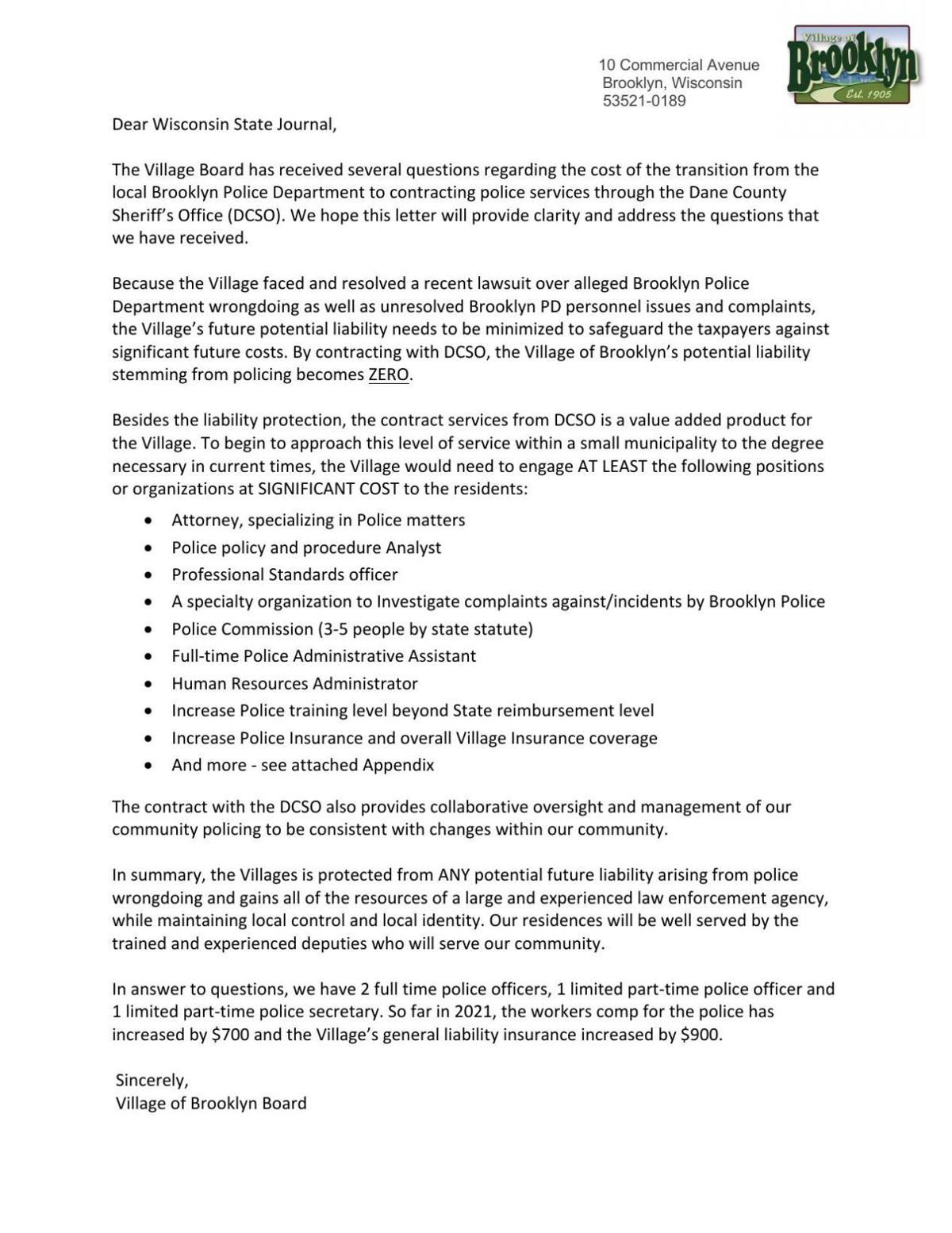 The board said that so far this year, workers’ compensation costs for police have increased by $700 and the village’s general liability insurance costs increased by $900.

Randy Burns, the village’s one full-time police officer, said he had “no clue” what lawsuit or complaints the Village Board was referring to.

The board called a contract with the Sheriff’s Office a “value-added product” that will include services such as an attorney specializing in police matters, a “police policy and procedure analyst,” “professional standards officer” and “specialty organization to investigate complaints against/incidents by Brooklyn Police.”

Sheriff’s Office coverage was expected to begin in early March, Springer said last week, but it wasn’t clear at that time what it would consist of. Sheriff’s Office spokesperson Elise Schaffer said then that a contract was about a month away from being completed but that the village was expected to spend about $141,000 annually for one deputy to work full-time in the community of about 1,400 south of Madison.

As of Tuesday, the Brooklyn Police Department’s page on the village’s website had been removed.

Brooklyn, located on the border of Dane and Green counties with a small section in Rock County, would become the seventh small municipality to contract with the Sheriff’s Office for police coverage, joining Black Earth, Cambridge, Deerfield, Dane, Mazomanie and Windsor. The Sheriff’s Office also has a full-time contract with the town of Middleton, and several other towns pay for some added police presence, Schaffer said.

Brooklyn’s police department in 2017 conducted a survey of residents that found 83% preferred keeping the local department over getting police services through Dane County, with about 59% rating the quality of the department’s services as “excellent” or “good.”

Man arrested after he points BB gun, pulls knife and pepper sprays victim on East Side

The arrival of snow means busy times for snowmobile clubs in southern Wisconsin.

Authorities on Tuesday identified a man who was shot to death during an altercation in Plover that left four people injured.

Bitter cold continues for Wisconsin, but finally some light at the end of the tunnel

After a long stretch of highs struggling to get out of the single digits, southern Wisconsin could see highs soaring to near 20 next Tuesday, according to forecasters.

A man was arrested after pulling a knife on a worker at Woodman’s, 711 S. Gammon Road, on Monday night, Madison police reported.

A homeowner and a guest were unharmed in a home invasion in the town of Blooming Grove early Wednesday morning, the Dane County Sheriff’s Office reported.