An outside review of a controversial June 2 detainment of a Black man in Monona has found police likely did not have authority to enter the home where he was briefly handcuffed, but also says “officers were polite, professional and apologized for the misunderstanding.”

The so-called after-action review by the Madison-based Riseling Group makes 20 recommendations, mostly aimed at improving the Monona Police Department’s policies, procedures and training, and names itself and other local organizations as options for further training.

Keonte Furdge, 23, was handcuffed for about a minute June 2 after police were called to 5111 Arrowhead Drive by a woman next door about a possible intruder at the home that had been vacant for several months after its previous owners died, according to the report and a police investigation. Four officers ultimately responded and after one of them did not get an answer when he cracked open the door and called into the home, two entered with guns drawn.

Shortly after Furdge came out of a back bedroom and was handcuffed, police discovered that he was the guest of a man who had moved in a day or two before, Toren Young. Young had permission from the home’s current owner, Mark Rundle, to be there. Rundle coached Furdge and Young, who is also Black, while they were on the Monona Grove High School football team.

Among the review’s findings are that while police had probable cause to launch an investigation of what was initially reported as a possible burglary, the kinds of “exigent circumstances” needed before police could enter a home without a warrant likely did not exist in the incident.

The report faulted the first officer on the scene, Jared Wedig, for not doing more to try to notify anyone in the house of his presence — including yelling again, knocking on the door or ringing the doorbell — and for further opening the front door. 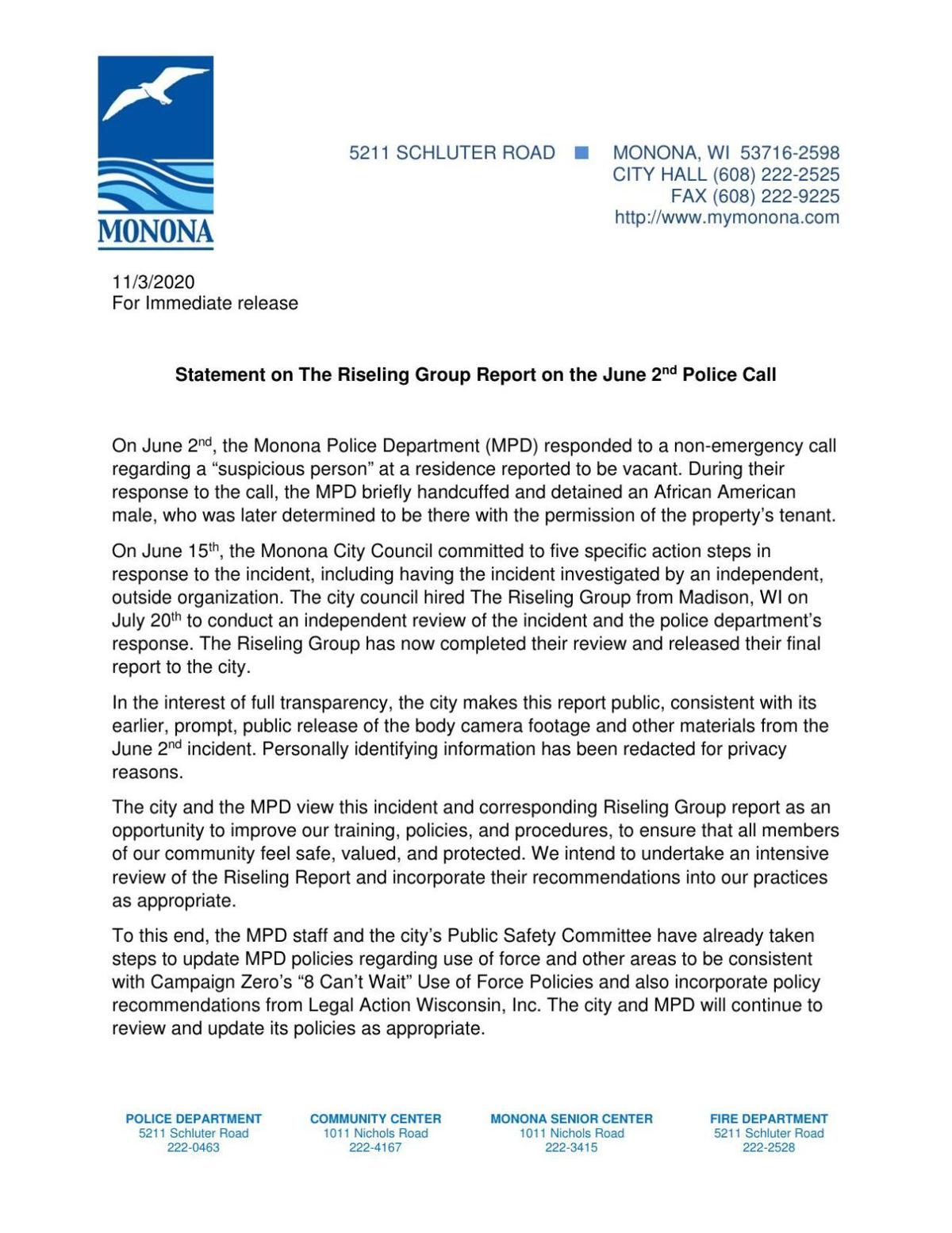 “This action potentially placed him at personal greater risk, would legally require a warrant but for exigent circumstances, and does not conform with best practices,” the report says.

The report also says that while handcuffing Furdge was “legal,” it was “not required.”

“In this case in particular, the individual was respectful and compliant, and provided the officer with the homeowner’s information right away. The second officer cordially recognized the individual. There was very little chance the individual could have escaped from the officer’s presence,” the report says.

Furdge later on June 2 filed a complaint against police over the incident in which he claimed he was targeted because he was Black, although he never signed the document. The city and The Riseling Group found officers did not know his race until he emerged from the bedroom.

On Sept. 14, Furdge filed a federal lawsuit against the city alleging the city had violated his civil rights, but the suit does not contend he was targeted because of his race.

Furdge declined to be interviewed for The Riseling Group’s report, as did Young, Rundle and the Latina woman, Raquel Schaaf, who called the Police Department’s nonemergency number to report Furdge’s presence at the Arrowhead home.

The city released a statement Tuesday saying “we intend to undertake an intensive review of The Riseling Report and incorporate their recommendations into our practices as appropriate.” Citing the pending federal lawsuit, it declined further comment.

The Riseling Group noted that Monona police policies are four or five years old and, as such, out of date, and that prior to the June 2 incident, the department did not require much, if any, cultural competency training for officers. Wedig, however, had had such training in 2012.

In addition to hiring The Riseling Group for $34,000 to do the after-action review, the city has also agreed to pay Madison-based Nehemiah Community Development Corp. $56,000 to facilitate discussions about race in the overwhelmingly white suburb, coach city leaders on racial issues, make recommendations for police and provide other assistance.

“Another session will be planned for early 2021,” he said, and “Nehemiah has also made 23 additional staff and community contacts so far.”