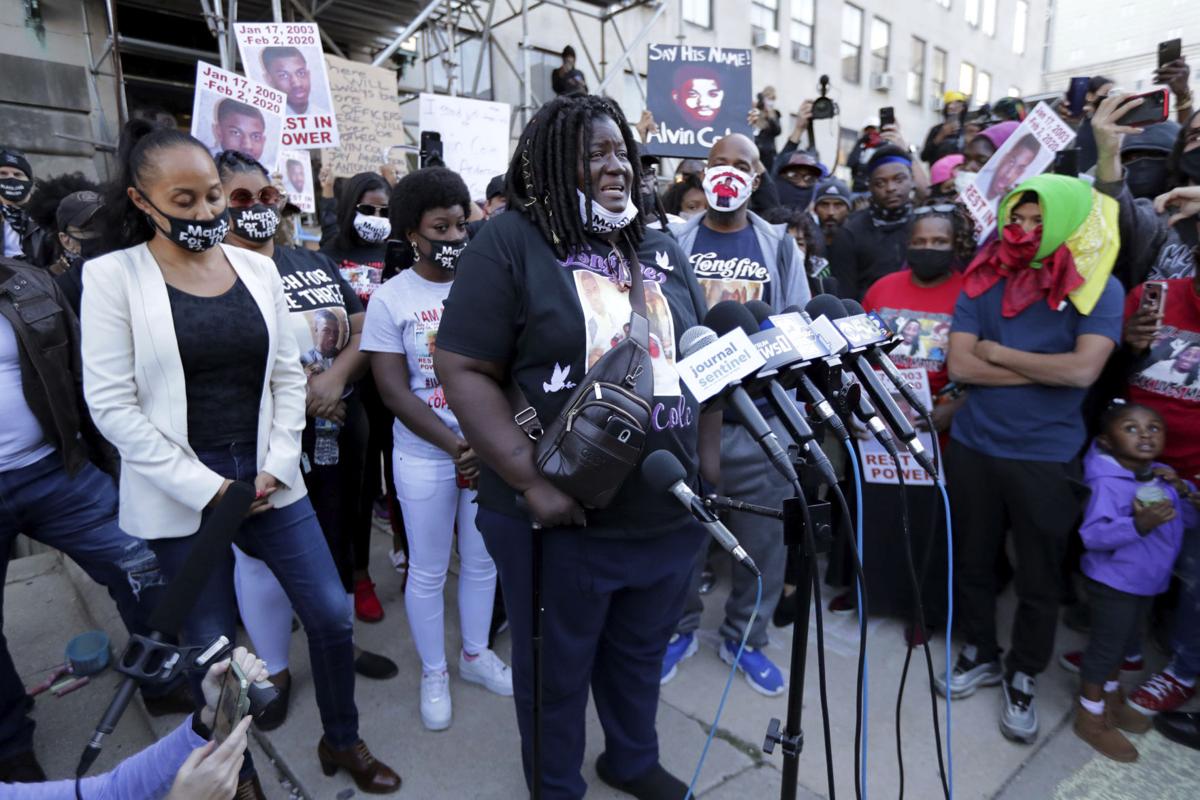 Tracy Cole, mother of Alvin Cole, talks to the media outside the Milwaukee County courthouse Wednesday. Cole and daughters Taleavia and Tristiana Cole were arrested Thursday night during a demonstration in Wauwatosa to protest prosecutors’ decision not to charge the police officer who shot and killed 17-year-old Alvin Cole. 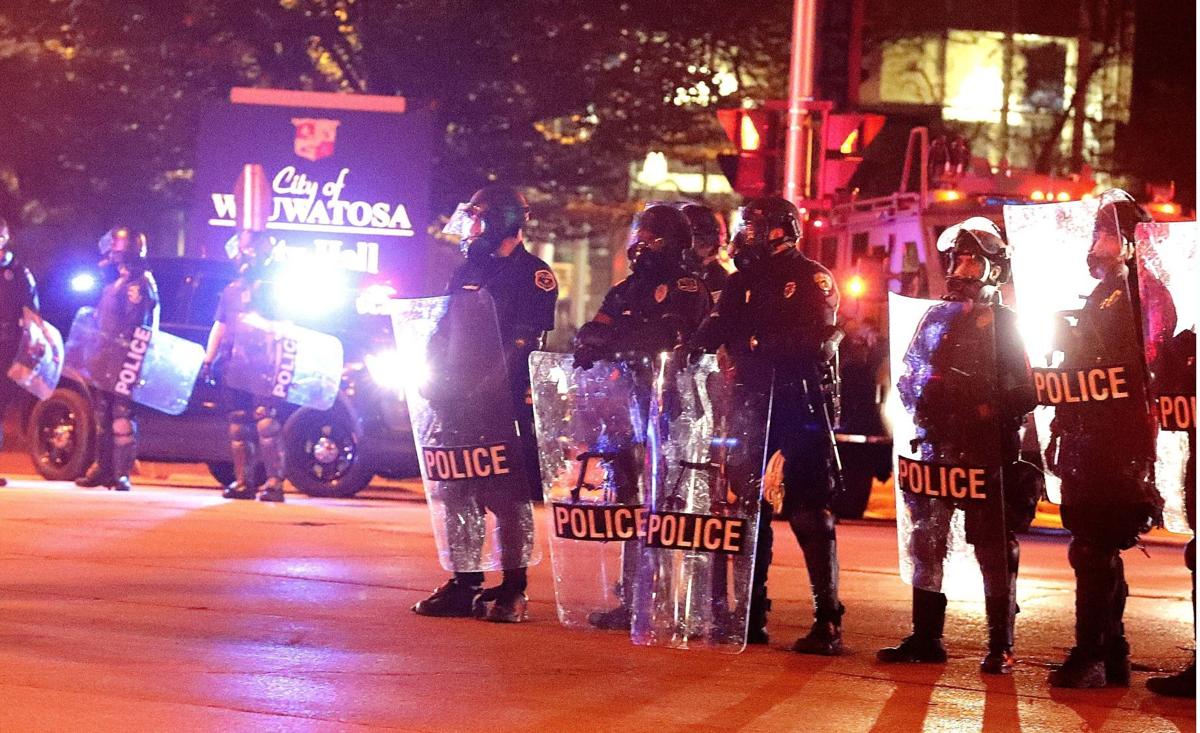 MILWAUKEE — Police on Friday defended the arrests of family members of a Black teen killed by a suburban Milwaukee officer, saying they were driving recklessly during a protest and refused officers' demands to leave their vehicles.

The arrests came as demonstrators gathered in Wauwatosa to protest prosecutors’ decision not to charge Officer Joseph Mensah in the 17-year-old's death. Mensah, who is Black, shot Cole after a foot chase outside a Wauwatosa mall in February.

Protests broke out again Friday for the third consecutive night. More than 100 people gathered outside City Hall past the 7 p.m. curfew and refused police orders to disperse. Roughly an hour later, police lined up in riot gear and began moving toward the crowd while deploying tear gas. Video posted to Twitter by local reporters showed heavy smoke in the air as police advanced, and multiple people taken into custody.

Police tweeted before 9 p.m. that the group had mostly dispersed and those who remained were being arrested. There was no immediate word on how many people were arrested or whether there were injuries. Police said earlier that law enforcement officers were hit with bottles. They also said that at one point protesters were taking trash bins from businesses and moving them into the roadway.

Motley said earlier Friday that Tracy Cole, 48, was treated at a hospital for injuries on her arm and forehead. She initially complained that her arm might be broken, but Motley clarified during a news conference that it was not. Tristiana Cole was also hospitalized but authorities have not indicated why. Motley tweeted that both were later released.

The family was protesting peacefully Thursday and police dragged them from their vehicles, according to Motley, who added that authorities arrested them for no reason. No family members have been cited or charged, she said.

“We all deserve better,” she said. “And we're entitled to better under the law of the United States.”

Wauwatosa police said officers encountered a group of vehicles after the 7 p.m. curfew. The vehicles were traveling across all lanes of traffic and officers used spike strips to stop them and protect other drivers, police said in a Friday statement. Most of the people in the cars were arrested without incident but some refused to get out and were forcibly removed from their vehicles, police said.

Police later said the Cole family was among those arrested and that Tracy and Tristiana Cole reported “minor injuries” and were taken to a hospital. The police did not offer any details on their injuries.

Motley said in a text to The Associated Press that the police account is untrue and is a “pathetic attempt to justify the abuse and unlawful arrest of members of the Cole family.” If the police version of events was true, she said, the family would have been cited or charged.

“Since when do people get dragged and beaten up for a traffic violation,” she said in the text. “This is America. Shame on them.”

The police statement said investigators were reviewing the incident and that citations and charges would follow.

Cole was the third person Mensah has killed on the job since he became a Wauwatosa officer in 2015. He shot Antonio Gonzales in 2015 after police said Gonzales refused to drop a sword. A year later, Mensah shot Jay Anderson Jr. in a car parked in a park after hours. Mensah said he saw a gun on the passenger seat and thought Anderson was reaching for it. He was cleared of wrongdoing in each case.

The city's police commission suspended Mensah in July and asked former U.S. Attorney Steven Biskupic to review the Cole case with an eye toward possible discipline. Biskupic's report Wednesday recommended Mensah be fired, saying the risk of a fourth shooting is too great.

Motley has vowed to file a civil rights lawsuit against Mensah.

The protests in Wauwatosa are just the latest in a series of demonstrations against police racism and brutality that have erupted across the country since George Floyd’s death. Floyd, who was Black, died in May after a white police officer in Minneapolis pressed his knee into his neck as Floyd gasped that he couldn’t breathe.

The mostly peaceful protests in Wauwatosa have turned violent at times, with demonstrators breaking windows and looting at least one store, and National Guard troops patrolling the city. Public pressure has mounted on the Wauwatosa police commission to fire Mensah quickly.

“Helicopters are circling above us, the National Guard is deployed on our streets, a curfew is preventing us from walking outside in our own yards, businesses are boarded up, there’s broken glass on our streets, families are marching and mourning the loss of their loved ones, police officers are at risk and none of us know what tomorrow will bring,” Milwaukee County Supervisor Shawn Rolland, who represents parts of Wauwatosa, said in a statement. “If this commission can accelerate its deliberative work, our people, businesses and neighborhoods can begin to heal faster.”

A decision on discipline isn't expected until at least November.

A Facebook livestream that captured only audio of Tracy Cole was made by a third daughter. She could be heard screaming in pain as she was being arrested, saying police injured her arm, hit her in the head and used a stun gun on her.

“I’m Mrs. Cole, Alvin’s mother,” she screamed repeatedly as officers pulled her out of her car.

“I can’t believe y’all did this to me. Y’all killed my son,” she yelled at the officers.

A man was hospitalized after being shot multiple times in a targeted shooting at a Stoughton bar early Saturday, police reported.

Police used tear gas on demonstrators and arrested 28 people during a third straight night of protests over the lack of charges against a suburban Milwaukee police officer who fatally shot a Black teen, authorities said.

The police chief of a Milwaukee suburb that has seen protests and unrest since an officer was cleared of criminal wrongdoing in the fatal shooting of a Black teenager in February said Monday that he sees no reason why the officer should be fired.

Lawyer: Wauwatosa cop who has killed 3 can’t be fired for fear of future shooting

An attorney for a Wisconsin police officer who has fatally shot three people since 2015 says his client shouldn’t be disciplined or fired simply because city officials are worried he might do it again.

Wauwatosa officer who has killed 3 since 2015 resigns

A Wauwatosa police officer who has fatally shot three people in the line of duty since 2015, including a teenager outside a mall in February, is expected to receive about $130,000 for resigning from the force.

Fifty people are suing the city of Wauwatosa over the way it handled protests last fall after authorities announced that a police officer would face no charges for the fatal shooting of a Black teenager.

Judge delays charging decision for Wisconsin officer who has killed 3

A judge has delayed his decision on whether to go around prosecutors and charge a Wisconsin police officer who killed a man sitting in a parked car, one of three people he has killed in his career.

Tracy Cole, mother of Alvin Cole, talks to the media outside the Milwaukee County courthouse Wednesday. Cole and daughters Taleavia and Tristiana Cole were arrested Thursday night during a demonstration in Wauwatosa to protest prosecutors’ decision not to charge the police officer who shot and killed 17-year-old Alvin Cole. 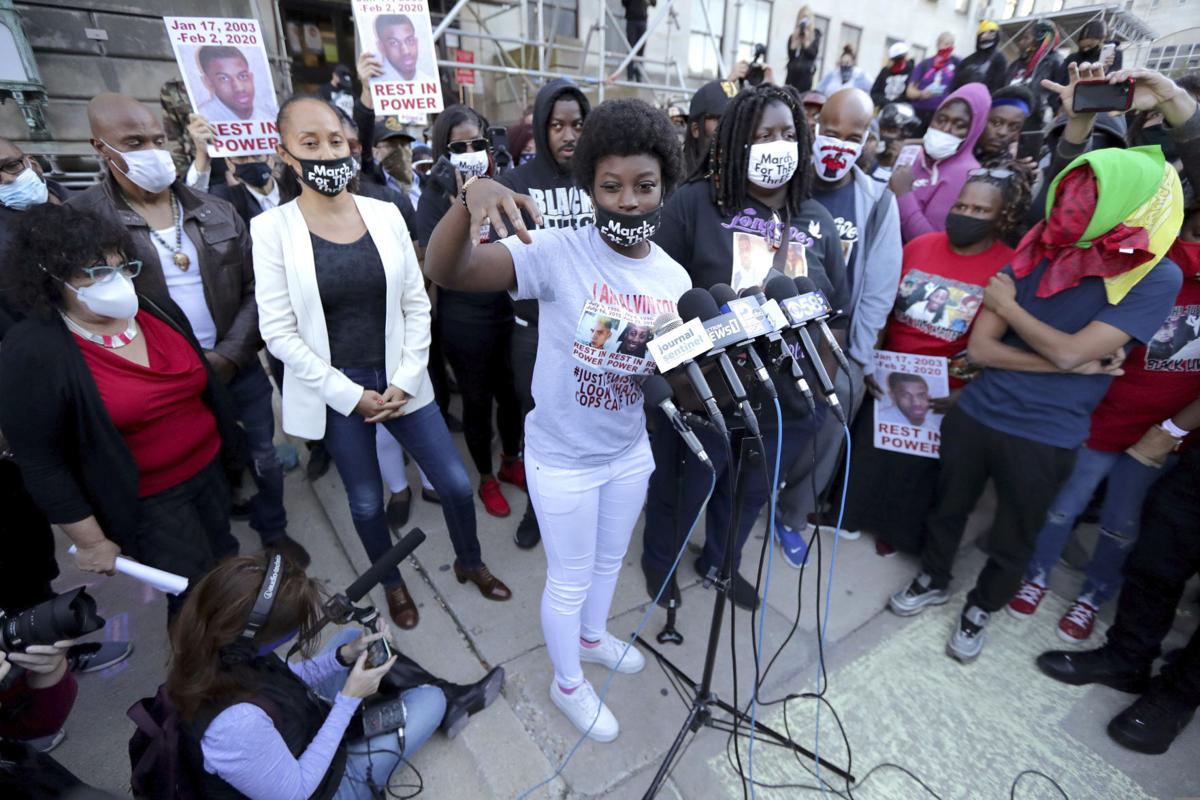