MILWAUKEE — Milwaukee police arrested a man suspected of throwing battery acid on a Hispanic man who says his attacker asked him, “Why did you come here and invade my country?”

Police said Monday they arrested a 61-year-old white man suspected in Friday night’s attack and were investigating the case as a hate crime. They refused to release his name pending charges, but the Milwaukee Journal Sentinel identified him as Clifton A. Blackwell, a military veteran whose mother said had struggled with post-traumatic stress.

Mahud Villalaz suffered second-degree burns to his face. He said the attack happened after a man confronted him about how he had parked his car and accused him of being in the U.S. illegally. Villalaz, 42, is a U.S. citizen who immigrated from Peru.

The attack comes amid an increase in hate crimes directed at immigrants that researchers and experts on extremism say is tied to mainstream political rhetoric.

Milwaukee Mayor Tom Barrett expressed shock at the attack and blamed President Donald Trump for inciting hatred against minorities. The president has repeatedly referred to migrants attempting to cross the U.S.-Mexico border as an “invasion.”

“To single out someone because they’re from a Hispanic origin is simply wrong. And we know what’s happening,” Barrett, a Democrat, said. “Everybody knows what’s happening. It’s because the president is talking about it on a daily basis that people feel they have license to go after Hispanic people. And it’s wrong.”

“The only person responsible for this heinous act is the person who committed it, and it’s disgusting the mayor of Milwaukee would rather point the finger at the president of the United States for political reasons instead (of) responsibly confronting the violence in his own community,” Deere said in a statement.

Jacqueline P. Blackwell, of California, told the Journal Sentinel that her son had moved to Milwaukee seeking to get help. She said she had not been in touch with him recently and had not heard of his arrest.

“I was comfortable that he was getting good care with the VA,” she told the paper.

Blackwell’s brother, Arthur Blackwell, 63, of Evergreen, Colorado, told The Associated Press on Monday that Blackwell “was not a confrontational person.” He says his brother served nearly four years in the Marine Corps.

State court records show Blackwell was convicted in a 2006 Rusk County case of false imprisonment and pointing a gun at a person. Details aren’t available online, but the Journal Sentinel reported the case involved Blackwell confronting men who had come onto his farm property tracking a deer.

Surveillance video of the acid-throwing incident shows the confrontation but does not include audio.

Villalaz told reporters on Saturday that he was headed into a Mexican restaurant for dinner when a man approached him and told him, “You cannot park here. You are doing something illegal.” He said the man also accused him of being in the U.S. illegally and of invading the country.

He said he ignored the man and moved his truck to another block. But when he returned to the restaurant, the man was waiting for him with an open bottle, Villalaz said.

The man again accused him of being in the U.S. illegally, Villalaz said. He then told the man that he was a citizen and that “everybody came from somewhere else here,” Villalaz said.

That’s when he says the man tossed acid at him. Villalaz turned his head, and the liquid hit the left side of his face.

Villalaz’s sister told The Associated Press on Monday that her brother believes the man was prepared and wanted to attack someone.

She said her brother is recovering. She said the doctor who treated him said it helped that he immediately washed his face several times inside a restaurant. His family created a GoFundMe page to cover his medical expenses.

Hate on the rise

A report last year by the Anti-Defamation League said extreme anti-immigrant views have become part of the political mainstream in recent years through sharp rhetoric by anti-immigration groups and politicians, including Trump.

Data collected by the FBI showed a 17% increase in hate crimes across the U.S. in 2017, the third annual increase in a row. Anti-Hispanic incidents increased 24%, from 344 in 2016 to 427 in 2017, according to the FBI data. Of crimes motivated by hatred over race, ethnicity or ancestry, nearly half involved African Americans, while about 11% were classified as anti-Hispanic bias.

Brian Levin, director of the Center for the Study of Hate and Extremism at California State University-San Bernardino, released a study in July that found a 9% increase in hate crimes reported to police in major U.S. cities in 2018. Levin found a modest decrease in bias crimes against Hispanic or Latino people — from 103 in 2017 to 100 in 2018 — in 10 major cities, including New York, Chicago and Los Angeles. However, Levin has said the totals likely would have increased last year if not for an unexplained drop in anti-Hispanic bias crimes reported for Phoenix, from 25 in 2017 to 10 in 2018.

The chance encounter with the hunters in 2006 sheds light into the temperament of 61-year-old Clifton A. Blackwell, now accused in a seemingly random, gruesome attack in Milwaukee.

Clifton Blackwell is charged with first-degree reckless injury with the added sentencing enhancers of hate crime and use of a dangerous weapon, which could add 10 years to a sentence of up to 25 years of prison and extended supervision if he's convicted. 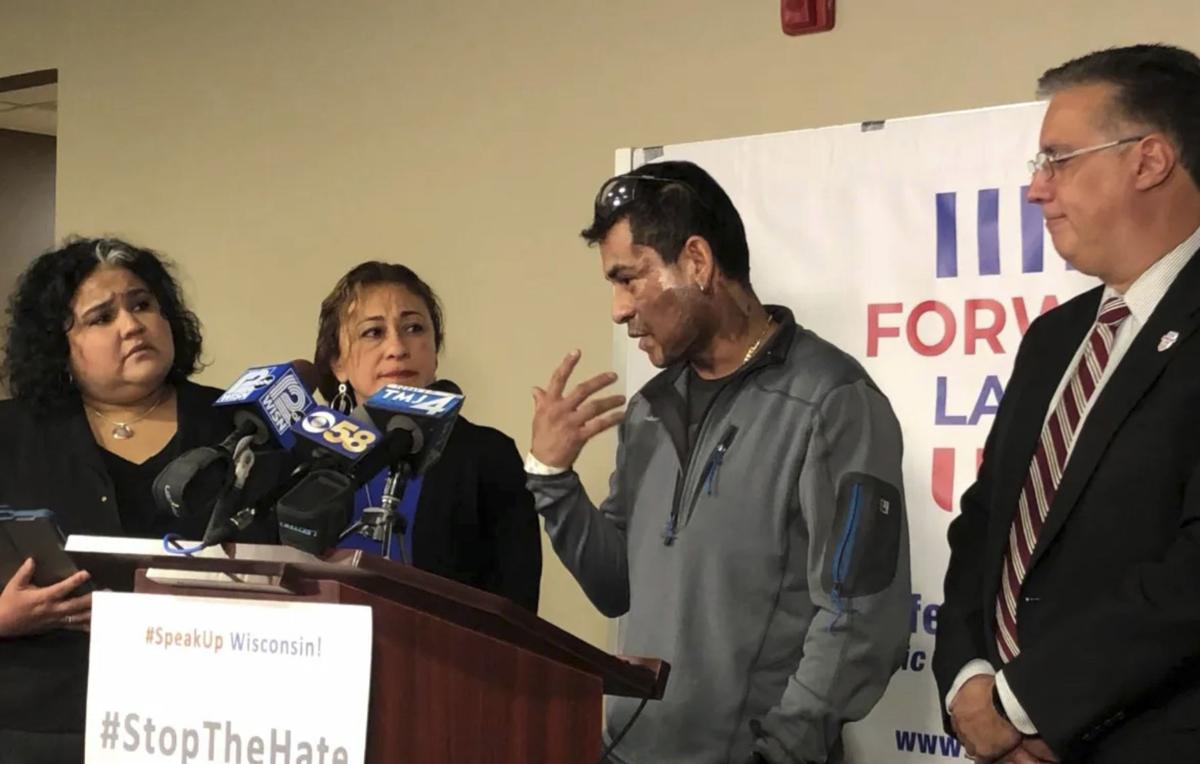 Mahud Villalaz, 42, of Milwaukee, discusses an incident in which a man threw acid at him outside a restaurant in Milwaukee. He is joined by, from left, state Rep. JoCasta Zamarripa, D-Milwaukee; his sister; and Forward Latino leader Darryl Morin. 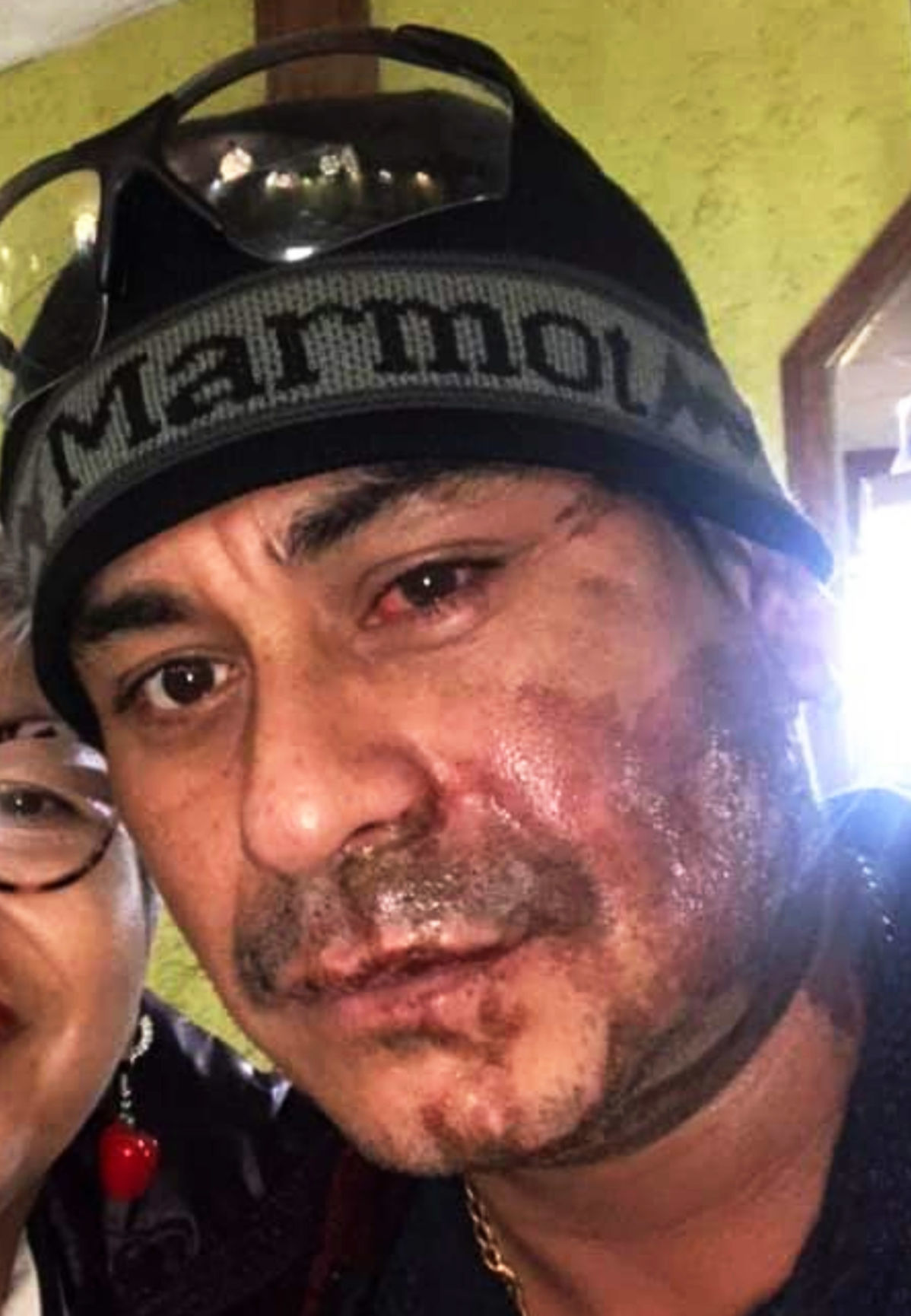 Mahud Villalaz was attacked by a man who threw acid on his face.