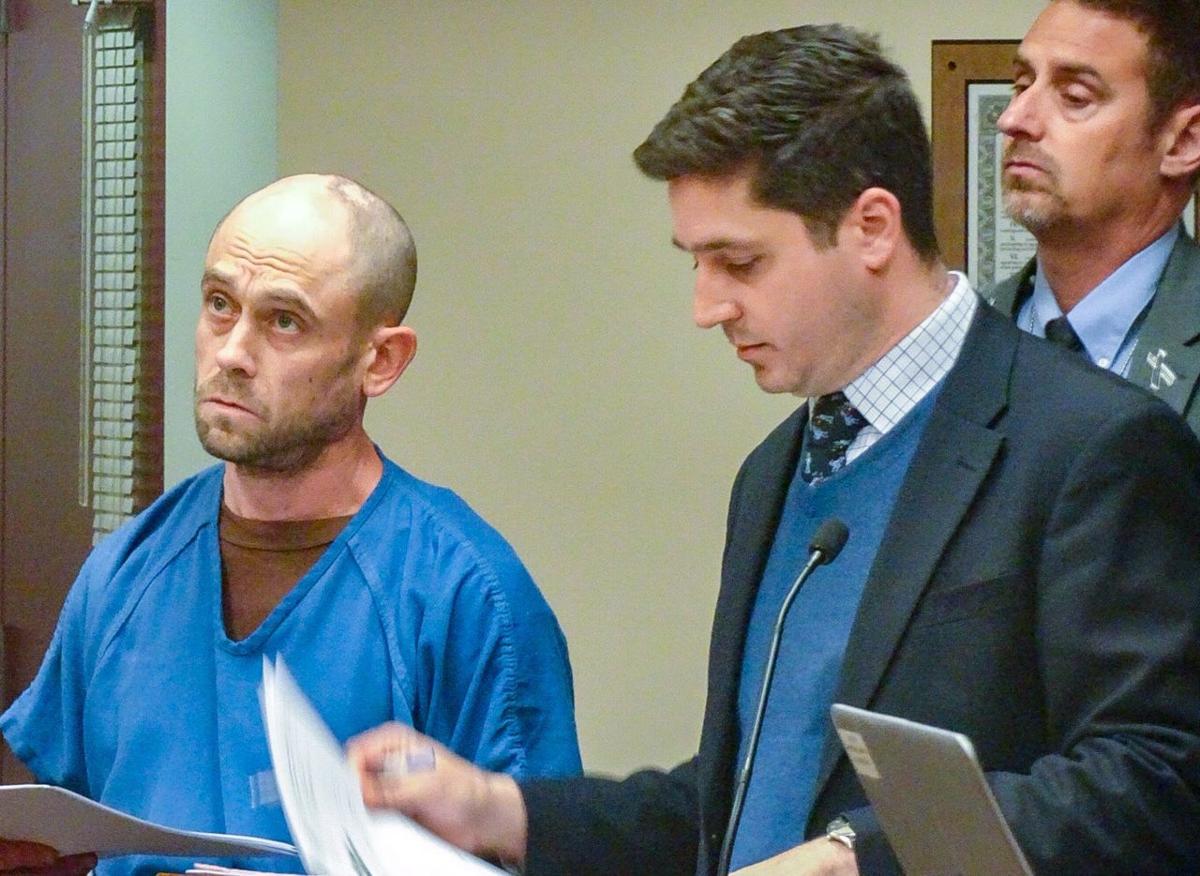 Benjamin Nickel, left, who told police he fired his gun at two men who he said stole marijuana on Oct. 17, appears in court Friday with state Assistant Public Defender Guy Cardamone. Nickel and Jeremiah Coby are each charged with two counts of attempted first-degree intentional homicide and other charges. 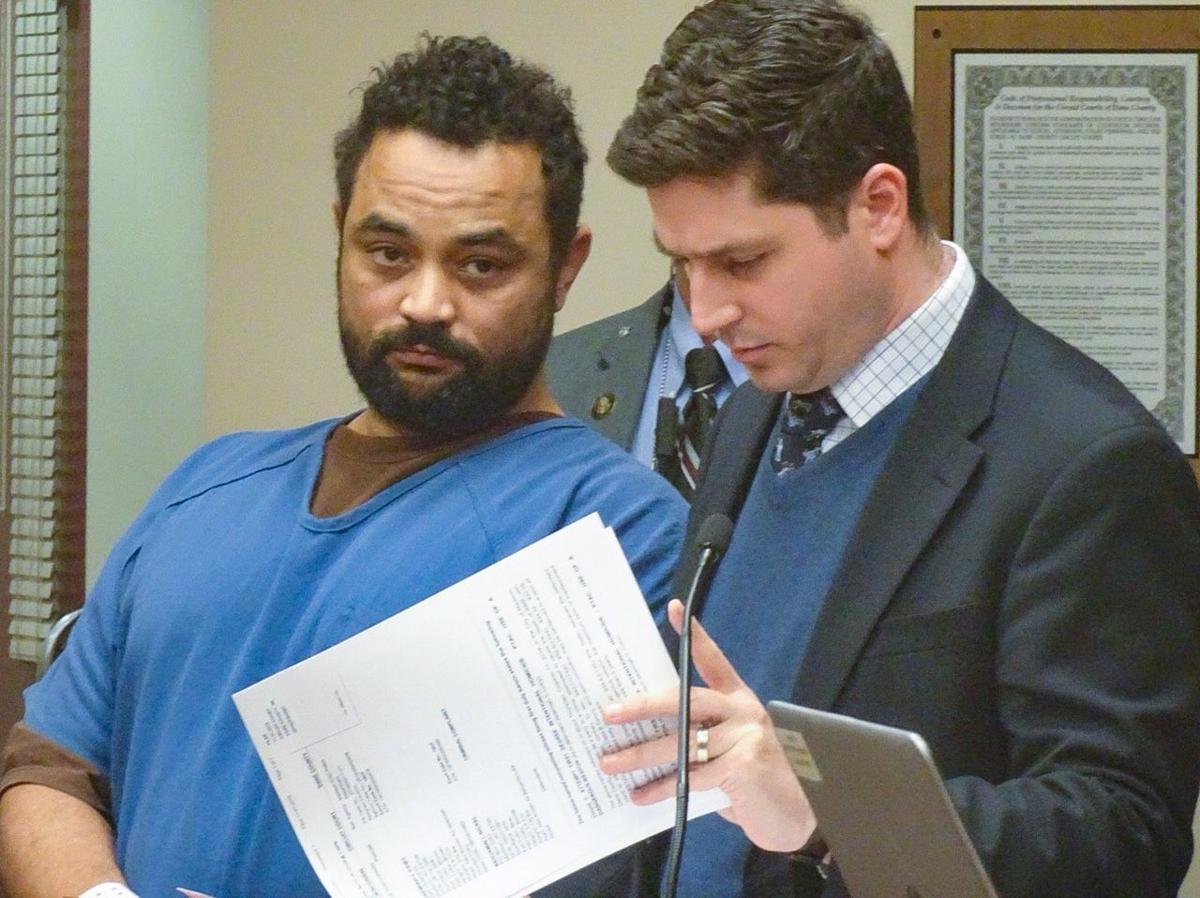 A Madison resident who was charged Friday with attempted first-degree intentional homicide told police he chased the men who stole a five-pound bag of marijuana from him and a partner, firing a gun at them as they ran away until it was empty, according to a criminal complaint.

Benjamin L. Nickel, 38, told a Madison police detective that during what was to be a large-scale marijuana sale on Oct. 17 at an apartment in the 600 block of Langdon Street, one of the purported buyers pulled out a gun, the complaint states.

“So I (expletive) knew they were going to rob us. He thought I was going to pull money out, but I (expletive) pulled out a gun, and I shot him because he said he was going to (expletive) kill us, so (expletive) ‘em,” Nickel told Detective Adam Kneubuhler after police had executed a search warrant this week at the home of Nickel’s partner in the deal, Jeremiah C. Coby, the complaint states.

Coby, 39, of Madison, and Nickel were each charged with two counts of attempted first-degree intentional homicide, along with possession of a firearm by a felon and possession with intent to deliver marijuana. Both appeared in court Friday, where they were each ordered jailed on $100,000 bail.

State Assistant Public Defender Guy Cardamone, who represented Nickel and Coby in separate hearings, said the men prosecutors are calling the victims set up a drug deal “with insufficient money, had Mr. Nickel and his co-defendant show up and held them up at gunpoint and tried to steal from them.”

“The fact that these guys retaliated or responded in kind is, I think, extremely telling,” Cardamone said. Nickel gave a full statement to police, and Cardamone said “they were literally robbed at gunpoint.”

But Court Commissioner Dan Floeter said he found it “very, very troubling that this event occurred in our community. I don’t think anybody has particularly clean hands in this situation.” He added later he was concerned about the number of shots fired, saying he found it “fortunate there wasn’t worse damage to either bystanders or participants in this drug transaction.”

Coby and Nickel will be back in court for a preliminary hearing Nov. 7.

After being called to the apartment about 10:35 p.m., officers met a man identified in the complaint by his initials who said he had set up a drug deal between Coby and two men identified in other documents as Phillip Buckner and Brandon Buckner Sr. Another court document states the Buckners are brothers.

The man said Coby had marijuana to sell. The man called Phillip Buckner and asked him if he was interested in buying marijuana. He told police it was a 5-pound deal worth about $9,000, but ended with shots being fired.

Coby arrived with a duffel bag of pot, the man told police. Phillip Buckner, 32, who was shot in the right bicep during the incident, told police he and Brandon Buckner went to the man’s apartment after the man called trying to arrange the deal. The weed wasn’t good, though, Phillip Buckner told police, so he “just took it on principle.”

“I probably shouldn’t have grabbed that (expletive), that’s what escalated it, you know what I’m saying?” he told Kneubuhler. He also admitted he was looking to rob the dealer. Phillip Buckner has not been charged with a crime.

Brandon Buckner told another detective that he and Phillip Buckner were in the apartment when they heard shots and believed they were being shot at.

Nickel told police he went along with Coby to the deal and tried to stay in the hallway outside the apartment, but then he was told to go inside. He said that’s when one of the men pulled out a gun. Nickel said he pulled out a gun, too, and began firing.

He said he chased the two apparent robbers, shooting at them until his gun was empty. Nickel said Coby told him later that Coby also shot at the Buckners from a window in the apartment.

Brandon Buckner, 28, was charged in a separate criminal complaint on Oct. 22 with second-degree reckless endangerment for allegedly firing a gun during the incident.

Central District detectives and patrol officers are working with the Violent Crime Unit and more arrests are anticipated, police said.

Benjamin Nickel, left, who told police he fired his gun at two men who he said stole marijuana on Oct. 17, appears in court Friday with state Assistant Public Defender Guy Cardamone. Nickel and Jeremiah Coby are each charged with two counts of attempted first-degree intentional homicide and other charges.