At 11:11 a.m. Thursday, a tangle of silver, red, pink and purple balloons rose above Brittingham Park, drifting with the wind in the direction of the hospital where at the same time the family of Anisa Scott was taking the 11-year-old girl off life support.

The hands that released those balloons belonged to mothers and fathers worried about their own children, classmates who couldn’t believe she was gone, co-workers of her stricken parents and people who didn’t know the family but shared the pain of losing a little girl to random gun violence. Two days earlier, a shooter fired into a car on Madison’s East Side, striking Anisa in the head.

Unable to sleep Wednesday from crying, Hopkins said Anisa’s smile was like the “sun was shining.”

The pain of Anisa’s death is compounded, Hopkins said, by the fatal shooting of her 15-year-old godson in Chicago last month. She urged anyone with information on Anisa’s shooting to come forward.

Late Tuesday morning, Anisa was riding in a car near the intersection of East Washington and Lexington avenues when someone in another vehicle fired at the car, striking her in the head.

The shooting left Anisa, a student in the Sun Prairie School District, mortally wounded. Her mother, Ashley Rios, and father, Marcel Scott, agreed to end life support at 11:11 a.m. to memorialize the date she was shot — Aug. 11 — and her age.

Police believe the driver of the vehicle carrying Anisa was the intended target. As of Thursday afternoon, police had made no arrests in the killing, Madison’s 10th homicide so far in a year that has seen an explosion of shootings around the city.

“(Anisa’s mother) doesn’t get to be the Ashley we knew prior to August the 11th,” Turner Walton said.

Declan Carr, a classmate of Anisa’s at Sun Prairie’s Horizon Elementary, was due to join her this fall as a sixth-grader at Prairie View Middle School.

“I just can’t believe this, it’s really unfair,” said Declan, who came to Brittingham Park from Sun Prairie with his family. “She never deserved this.”

Declan’s father, Matt Carr, was introduced to Anisa when she was in the same kindergarten as his son. Over the years at Horizon, he said, she developed into a person who would stand up for her friends, was unfailingly polite and exhibited great character, calling her a “really special girl.”

“There’s certain kids who stand out as little beacons of light,” Carr said. “That’s exactly what she was.”

In a statement, the Sun Prairie School District said its student services team has a plan in place to support students and families, and parents were directed to resources on how to help children grieve.

“We offer Anisa’s family and friends our deepest condolences,” Sun Prairie School Board president Steve Schroeder said. “This is a senseless tragedy that is affecting our community widely.”

Lavern Brown, a mother of two, didn’t know Anisa or her family. But she said she felt compelled to show her support because “that could have been anybody’s child.”

“I grew up in Madison, born and raised, so just to see this happen it’s kind of tragic because it used to didn’t be like this,” Brown said. “She was in a car. It’s like you can’t even have kids enjoy a ride.”

Brandi Grayson, an activist in the Black community, said she also didn’t know Anisa but understood “what it means, what it looks like to be a bystander and be violated.”

In statements Thursday, Madison Mayor Satya Rhodes-Conway and Gov. Tony Evers offered condolences to the family while calling for limiting access to guns.

“We need the federal government to pass common-sense gun control to get these handguns off the streets,” Rhodes-Conway said. “We need the federal and state governments to provide the economic supports families need to get through this pandemic, which is staggering our economy and contributing to this rash of violence.”

‘Put the guns down’

Lamont Moses, 41, came to the memorial with other grassroots organizers from the Allied Drive neighborhood, handing out signs printed Thursday morning that read, “Put the guns down. We’ve got to do better.”

Madison police have asked anyone who might have information material to solving who shot Anisa Scott to call Madison Area Crime Stoppers at 608-266-6014 or submit a tip online at p3tips.com. Tipsters can remain anonymous.

Moses said he was thinking of his own 10- and 12-year-old children.

“It’s a tragedy if this happens in any city to a child, not just Madison, Wisconsin,” he said. “This is an innocent child that had her life snatched away from us.”

While Sirena Flores, an incoming senior at UW-Madison, didn’t know Anisa, her nieces did.

On Wednesday, she had to help explain to them the concept of life support and why it’s sometimes better to let someone go if they’re suffering.

Flores, who is majoring in political science and sociology with a minor in African studies, said society needs to stop idolizing firearms and normalizing gun violence.

“To think that I’m 22 and babies haven’t even made it to my age,” she said. “Since yesterday I woke up and my heart was aching, just feeling pain and just feeling that mother’s pain.”

Ebony Anderson-Carter, who knows Anisa’s parents, said it’s a “shame that the community and the people who do know wouldn’t even pull together and give up the person who did this.”

She said she understands some are fearful of repercussions for speaking to police, adding the relationship between police and the Black community needs to be healed before people can feel comfortable providing information.

The orchestra will perform two versions of Concerts on the Square live from Breese Stevens Field on Aug. 25 and Sept. 1 and broadcast the performance for free.

Driver flees police, gets in rollover crash on East Side, Madison police say

After failing to stop for police, a driver got into a rollover crash with a 2-year-old in the car in Madison. Both were taken to the hospital, but not seriously injured.

With gains in reading proficiency a priority for Carlton Jenkins, a fourth chief of schools position is being added to the Madison School District with two of the administrators focused on elementary schools. 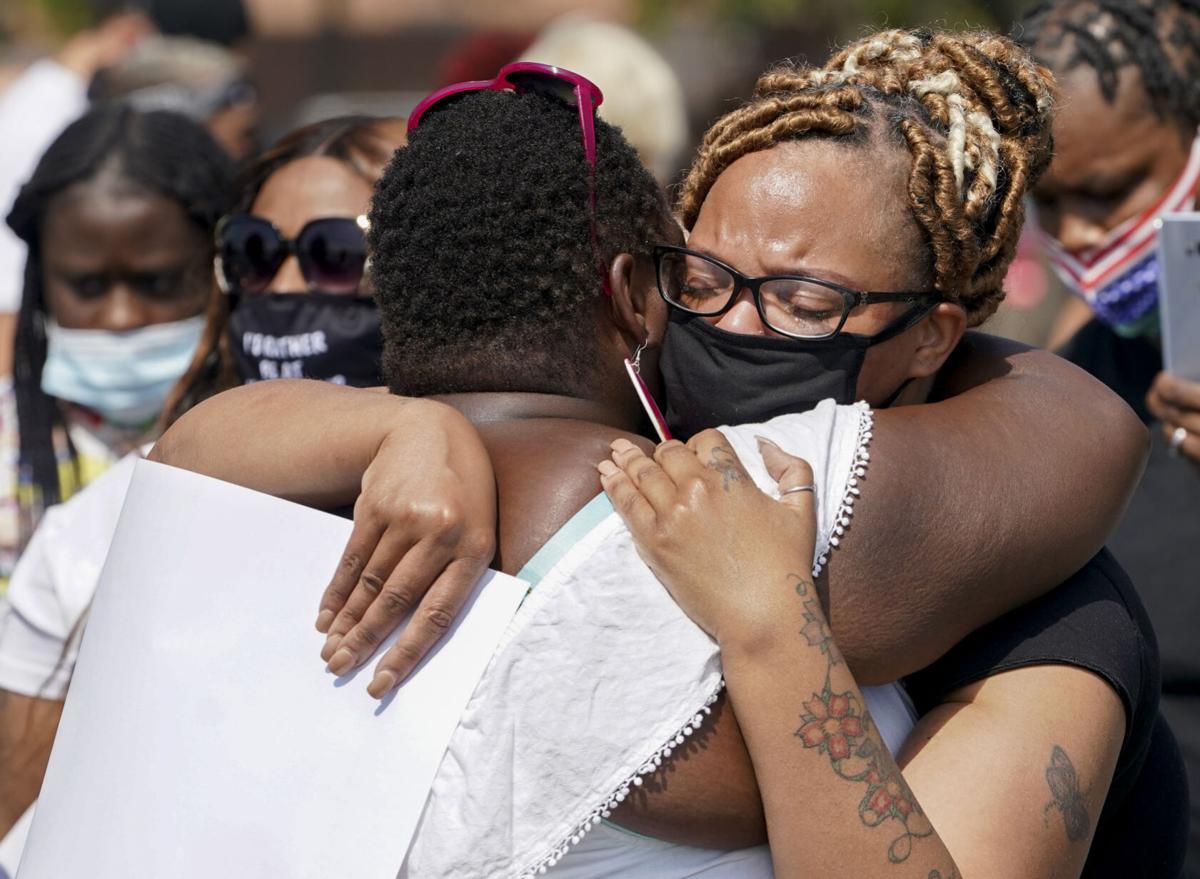 Brandice Hatcher, left, and Tisha Butler comfort one another during a memorial Thursday for Anisa Scott, an 11-year-old girl who was shot Tuesday on Madison's East Side and taken off life support Thursday. 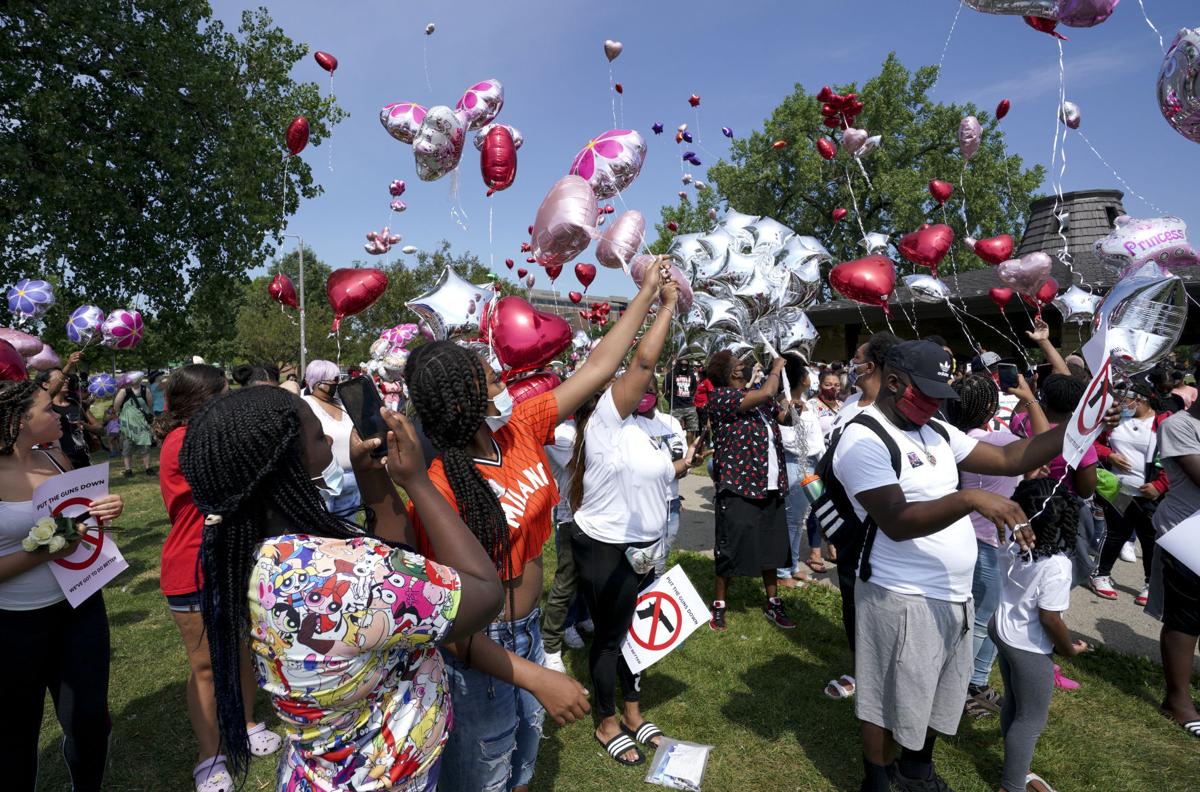 Mourners release a tangle of balloons from Brittingham Park at 11:11 a.m. Thursday, the moment Anisa was being taken off life support. 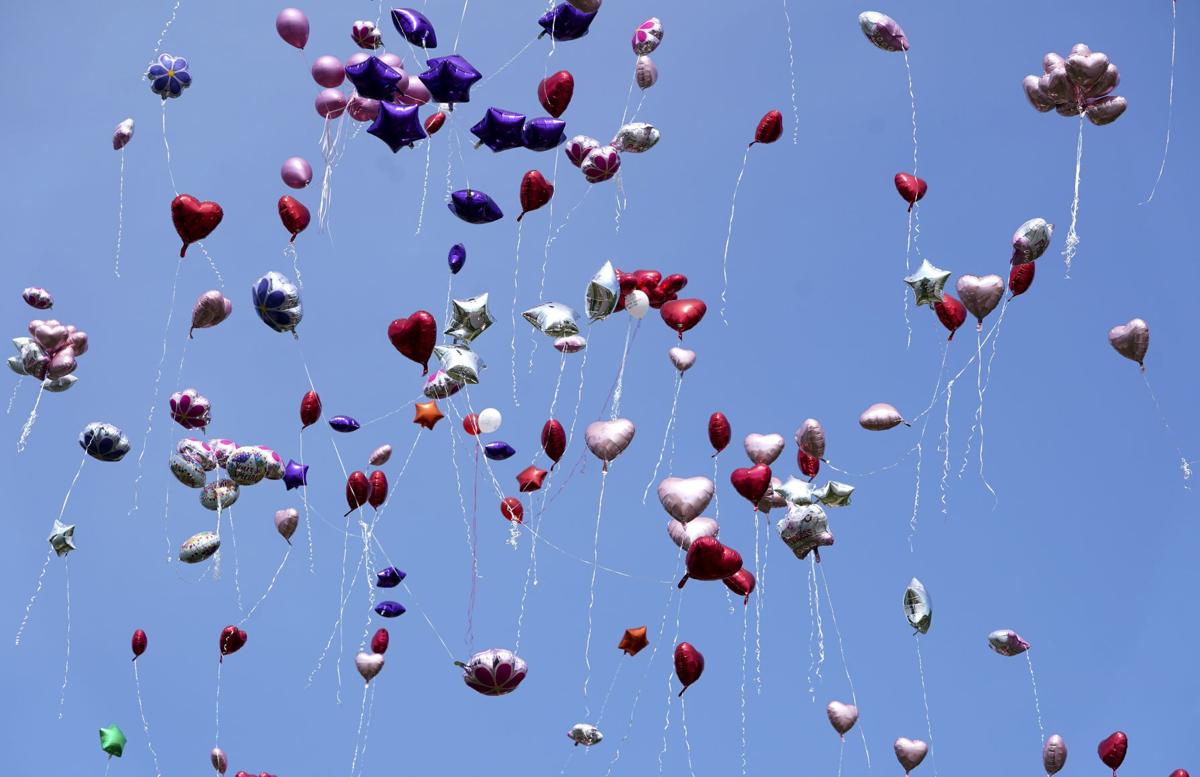 Balloons drift in the direction of American Family Children's Hospital on Madison's Near West Side, where friends and family of Anisa Scott also let go of balloons after the 11-year-old was taken off life support. 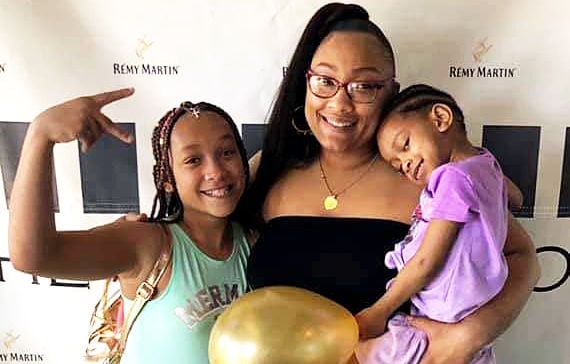 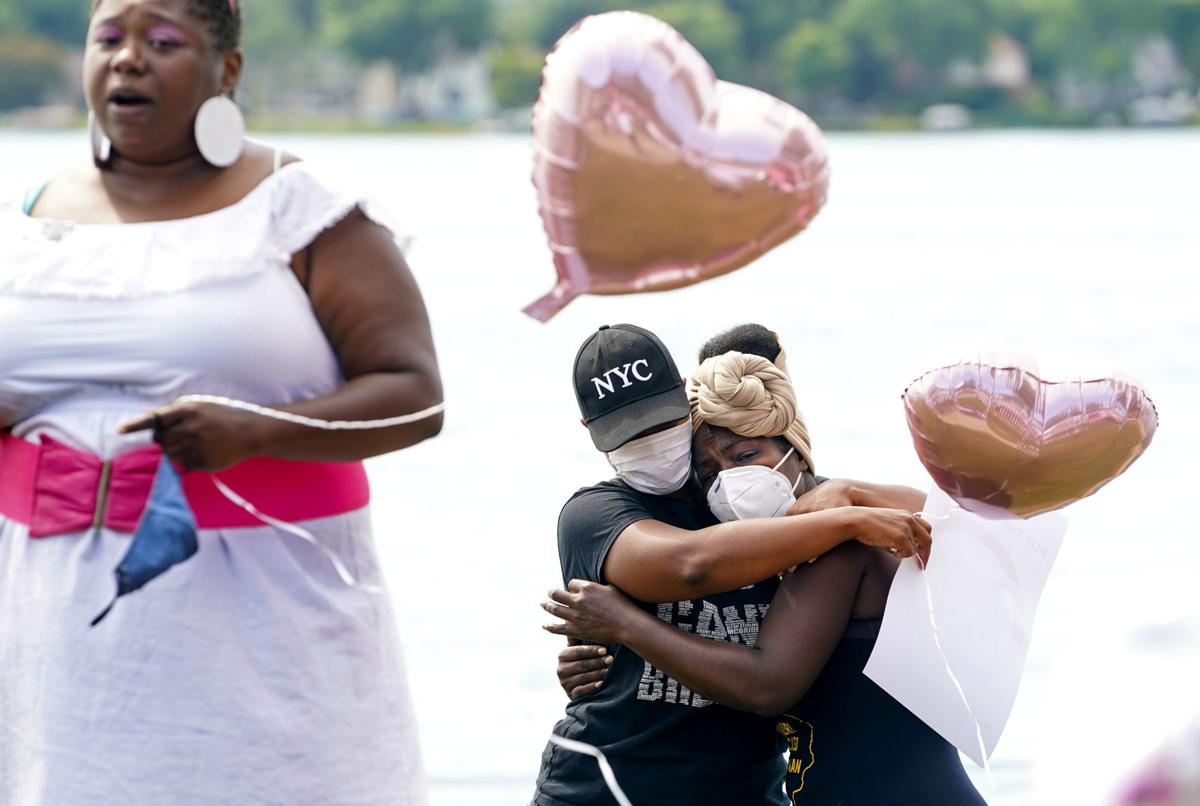 The memorial at Brittingham Park for Anisa drew friends and strangers who called her killing senseless, confusing and painful in a summer that's seeing a surge of gun violence across Madison. 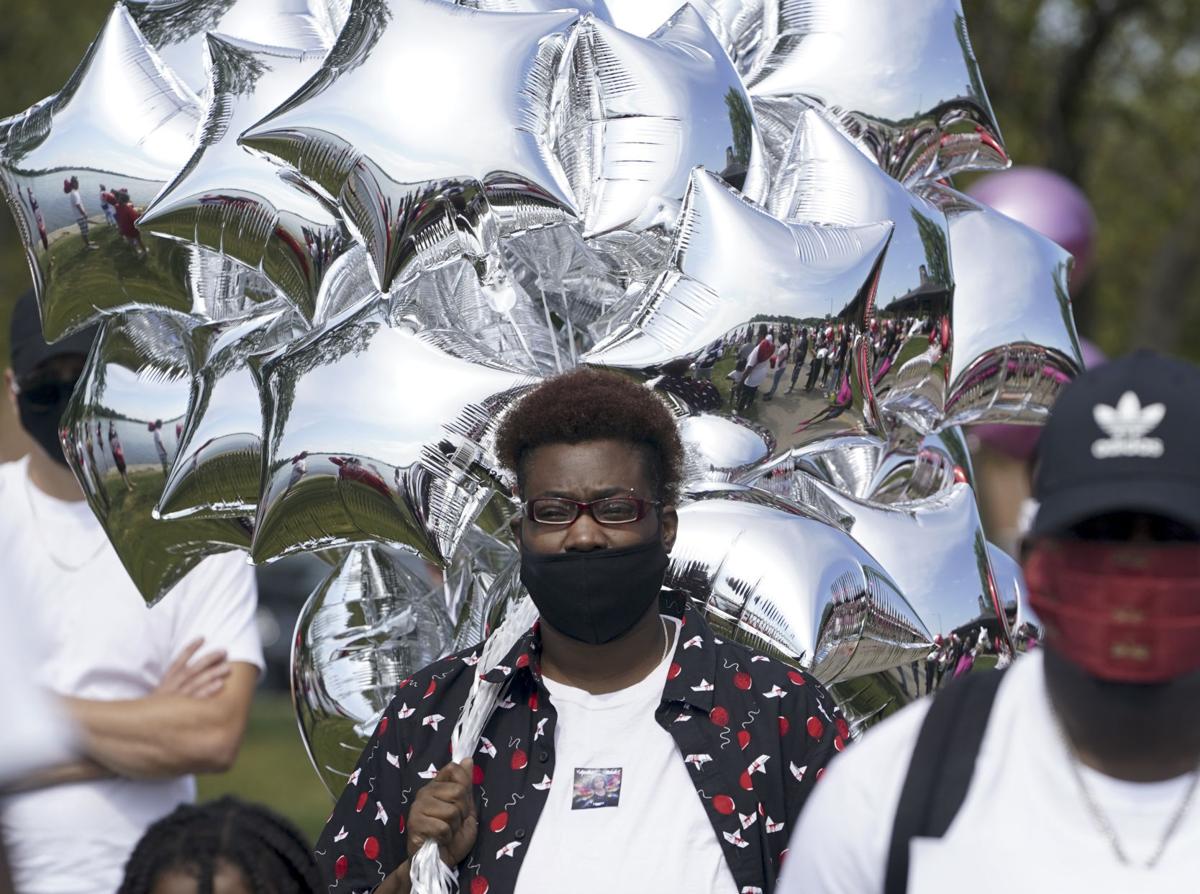 Debbra Coleman, "DC," listens to speakers at Thursday's memorial in Brittingham Park urge an end to gun violence and for those involved in Anisa's killing to turn themselves in. 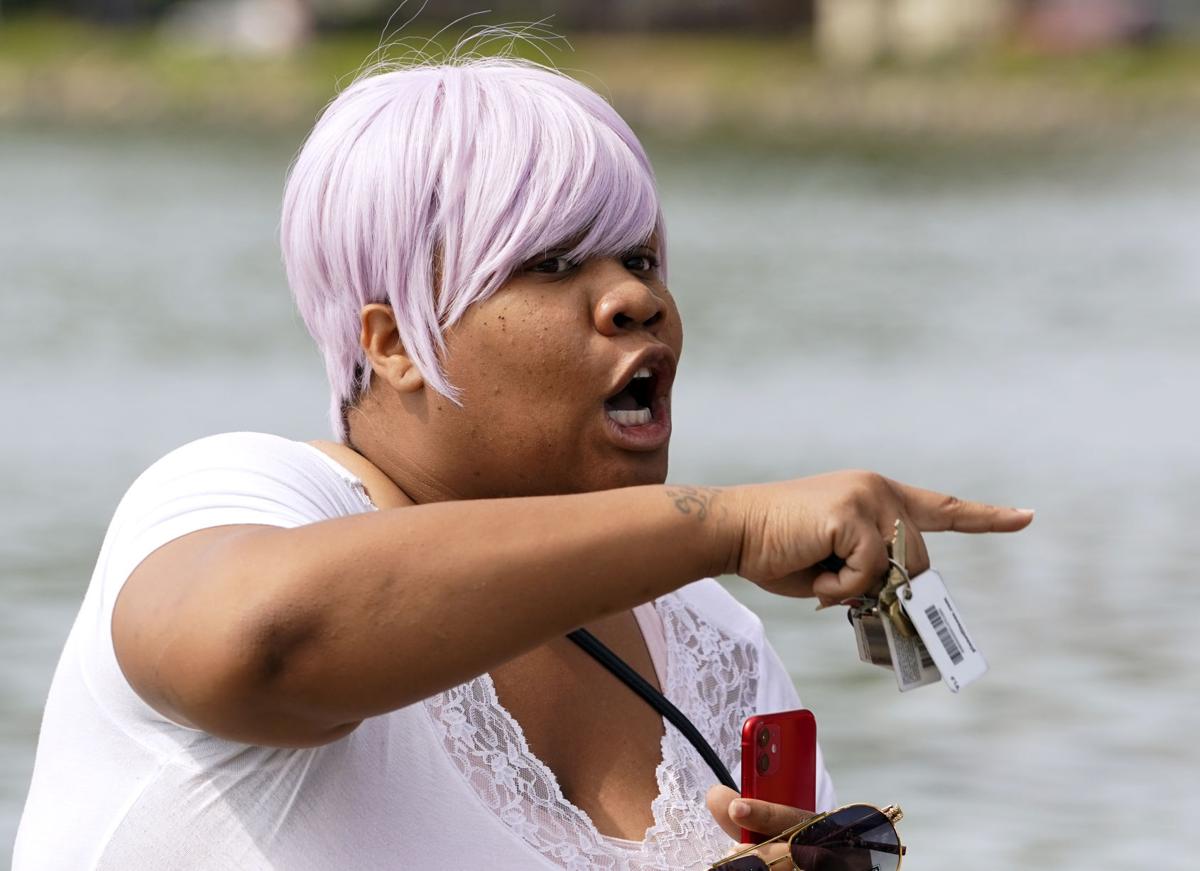 Thinking of her own children and her 15-year-old godson shot and killed in Chicago last month, Lillian Hopkins urged anyone with information on the shooting of Anisa to come forward.