A 17-year-old Madison high school student was fatally shot in a drive-by shooting outside a large party late Saturday night at a residence near Camp Randall stadium, police said.

The teen, whose name has not been released, was shot about 11:50 p.m. Saturday in the 10 block of Lathrop Street, Assistant Chief Paige Valenta said. The victim was driven to the hospital, where life-saving measures were administered but the teenager died, Valenta said.

Police did not identify the male victim but said he is a student in the Madison School District and was attending the party when the shooting occurred. Police said it was unclear whether the teen was the intended victim.

The shooting was Madison’s fifth homicide of 2021 and the fourth related to gun violence, Valenta said.

“This act of violence has crossed a line of what is acceptable,” Valenta said. “It is an assault on all of us and our sense of safety and security. My heart goes out to the victim’s family. No one should lose a child.”

The investigation into the shooting Sunday overlapped with one of Madison’s biggest moving days, as leases turned over ahead of the coming school year. Family vans and U-Haul trucks filled with student belongings squeezed past police vehicles and two officers from the K-9 unit with a German shepherd sniffing the street terrace. Discarded mattresses, rugs and chairs littered lawns along the street.

A UW-Madison junior who lives on the corner of Lathrop Street and Chadbourne Avenue, near where the shooting occurred, said residents at a three-story apartment building next door had thrown a loud party Saturday night with as many as 100 guests.

The student, who asked that her name not be used, said she awoke Saturday night to the sound of gunshots. When she looked out the window, “I saw all the people scattering,” she said. A housemate messaged the residents in her building to say that he had called police.

“There was, like, eight shots in a 10-second time frame,” the student’s boyfriend said.

It was the second large party in a row at the neighboring rental property, the UW-Madison student said. On Friday night, police had shut down a party at that location with even more people present, she said.

A call to the property manager of the residence was not returned Sunday afternoon.

Valenta said at a media briefing Sunday that, shortly before midnight Saturday, police responded to a report of shots fired in the 10 block of Lathrop Street.

“Officers arrived on scene and located multiple bullet casings in the street. While officers were on scene investigating, a vehicle arrived at a local hospital containing a 17-year-old male who had been shot,” Valenta said.

Valenta said the homicide investigation is ongoing and details may change. However, “So far the investigation indicates that there was apparently a party occurring at a residence on Lathrop Street,” she said. “Several people were outside. A vehicle drove by and fired shots. A parked car and possibly another building in the area was struck by bullets. The 17-year-old decedent was there as a partygoer.”

Witnesses said there were about 100 people in the street just prior to the shooting, according to police.

“We had previously been called to the party address for noise complaints and complaints of party, but not for acts of violence,” Valenta said.

Madison police have been in touch with Madison School District officials, who will be providing support to students who may be affected by the teen’s shooting, Valenta said. University Police also were contacted because of the large number of UW-Madison students who live in the area, she said.

Representatives from the school district and University Police did not respond to calls and emails Sunday.

Shortly after 1 a.m. Sunday, police were dispatched to the 2100 block of Atwood Avenue on the East Side on reports of shots fired, Sgt. Ryan Gibson said.

Officers found one shell casing in the street, but there were no reported injuries or damage to property, Gibson said.

And at about 1:25 a.m. Sunday, police were dispatched to the area of Lake Street and State Street Downtown on a report of a man with a gun, Gibson said.

Officers did not locate a suspect. The witness who reported the gunman said that a male stood in front of a car leaving the area of State and Lake and yelled something to the occupants before the suspect and car fled the scene, Gibson said.

There were no reported gunshots or injuries, Gibson said.

Police are looking into whether any of the incidents are connected to the Lathrop Street homicide, Valenta said.

Just 24 hours earlier, around 1:45 a.m. Saturday, police arrested a 28-year-old Madison man after they say he fired a handgun indiscriminately into the air in the 500 block of State Street. No one was injured, but several buildings were hit, and police recovered 10 shell casings from the scene.

After being shot at, deputy shoots, injures 2 in Marathon County, authorities say

The Wisconsin Department of Justice said Saturday a Marathon County deputy shot two people while returning fire after approaching a car that had been involved in a chase.

One teenage boy has been arrested and another is still being sought in a shooting that killed a Milwaukee boy who was staying at a home in a Cleveland suburb, police said.

Fire officials said a welding accident was the cause of the fire.

Five people were injured and two were flown to UW Hospital after a two-vehicle crash near Columbus on Friday, authorities reported.

Man admits he was speeding, pleads guilty to reckless homicide in 2019 East Washington crash that killed 1

Jason A. Natcone admitted he was speeding before a crash that killed a Chicago man.

2 die in Milwaukee when their vehicle is hit by drag racer, police say

Two people died late Sunday in Milwaukee after their vehicle was struck by another vehicle that was drag racing, police reported.

Two people were injured, one critically, on Sunday afternoon when a driver ran a stop sign, lost control and rolled their car multiple times, the Lafayette County Sheriff’s Office reported.

A 17-year-old Madison School District student was shot and killed over the weekend.

Witnesses pulled an injured driver from a vehicle after a rollover crash on the North Side on Sunday afternoon, Madison police reported.

At least 8 people had contents of packages stolen at West Side apartment building, Madison police say

At least eight people had the contents of their packages stolen at a West Side apartment building, Madison police reported.

Before firing the shot, the man referred to the Asian woman's race and threatened to kill her, a complaint states.

Madison police are investigating gunshots fired on the Southwest Side Monday night and Downtown early Tuesday.

A man was arrested cutting a car’s tires with a knife after getting sprayed by a skunk on Monday night, Madison police reported.

Madison Police got a call reporting a large, loud party near Camp Randall about 15 minutes before a 17-year-old Madison high school student was killed in a drive-by shooting there.

The Atwood Avenue shots happened a little more than an hour after a 17-year-old boy was shot to death late on the night of Aug. 14 near Camp Randall Stadium. 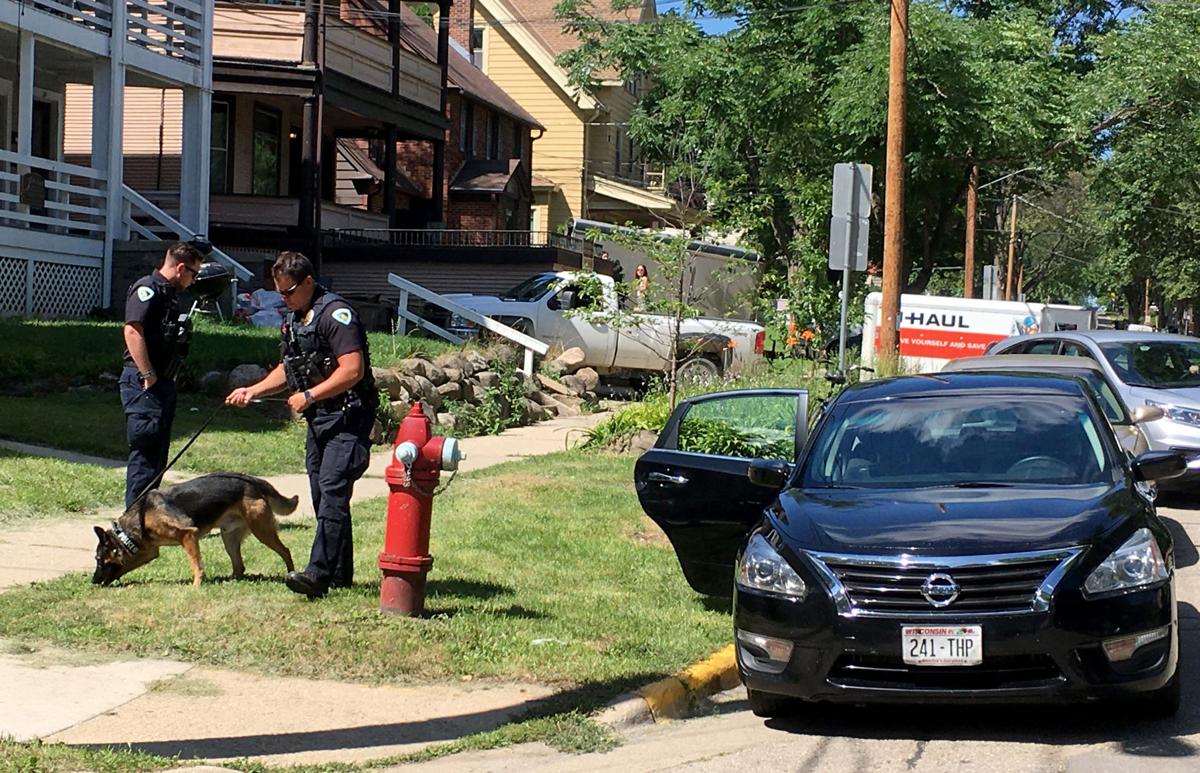 A Madison police K-9 unit investigates the scene of a fatal shooting that occurred late Saturday night in the 10 block of Lathrop Street. 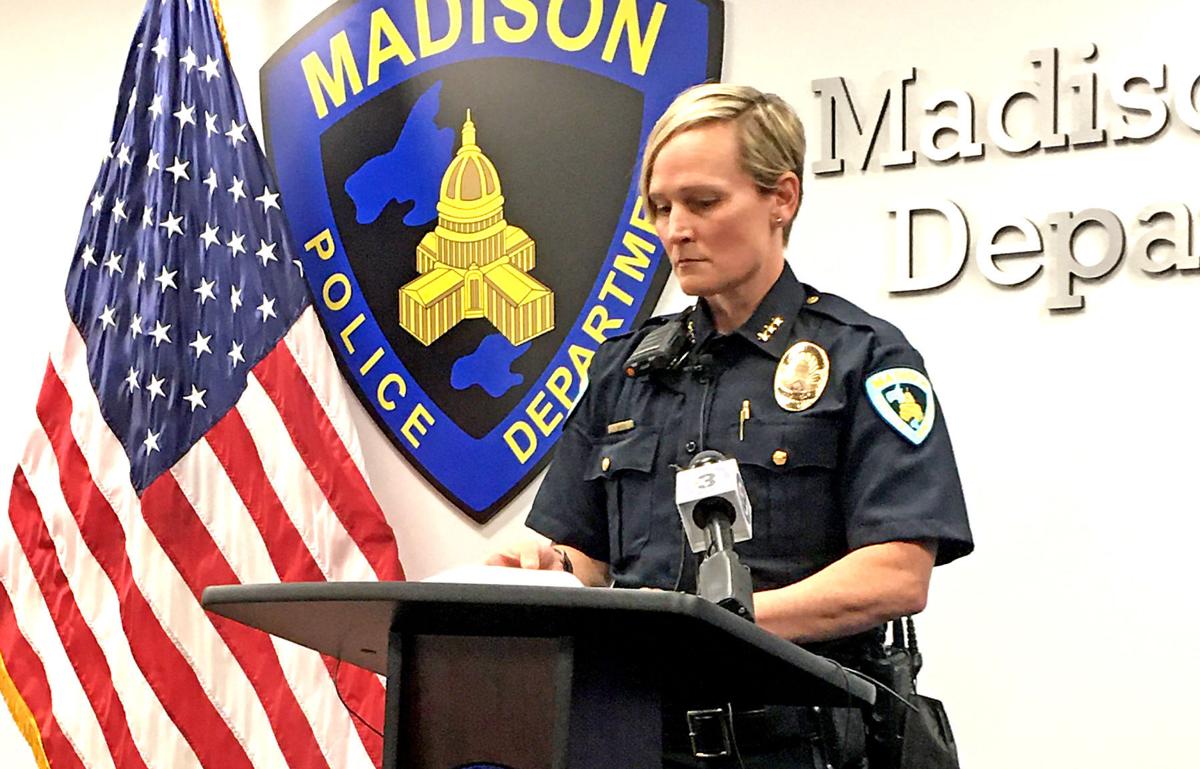