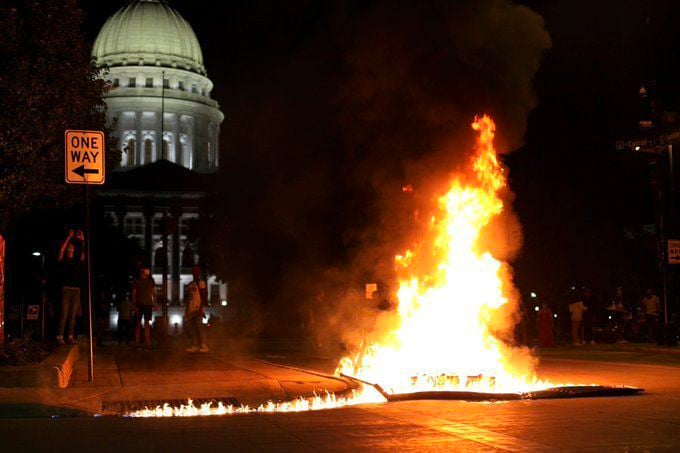 Protesters lit several dumpsters on fire throughout Madison's Downtown Monday night and early Tuesday during protests against the police shooting of Jacob Blake in Kenosha. 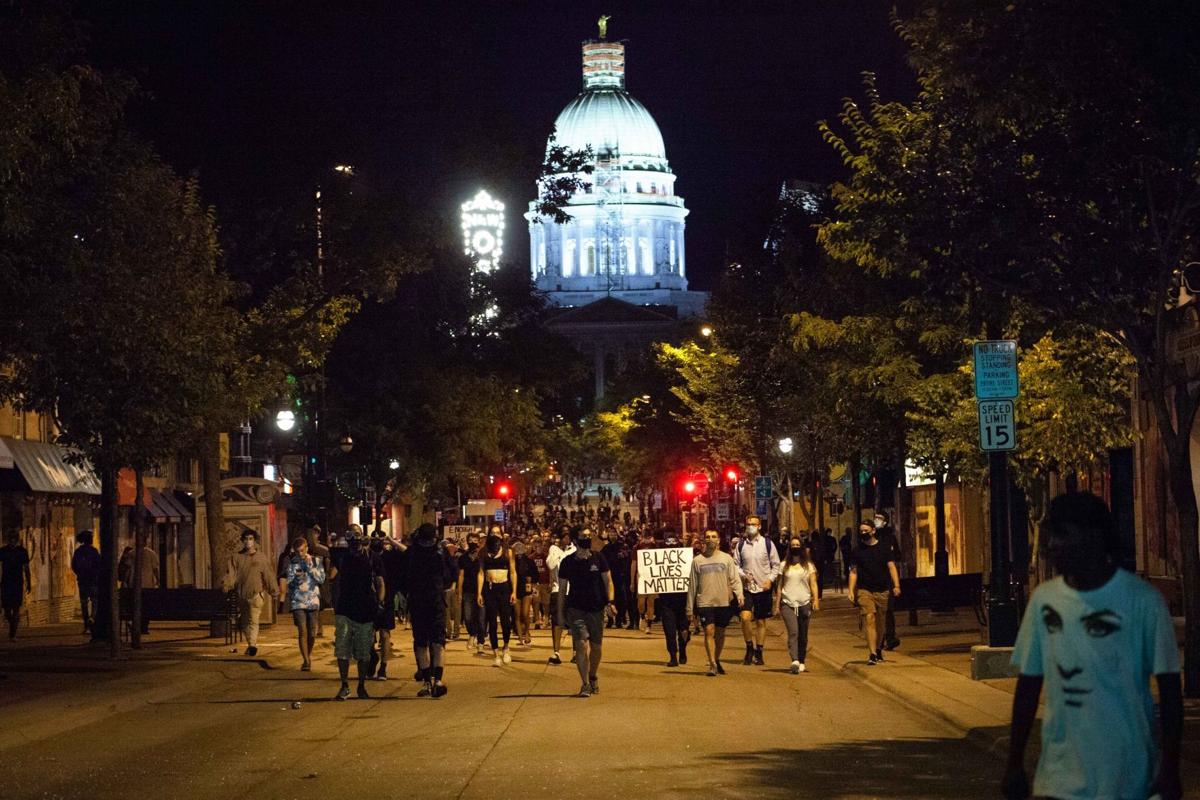 Hundreds of protesters march down State Street late Monday night to take a stand against racism, police brutality and the police shooting of Jacob Blake in Kenosha. 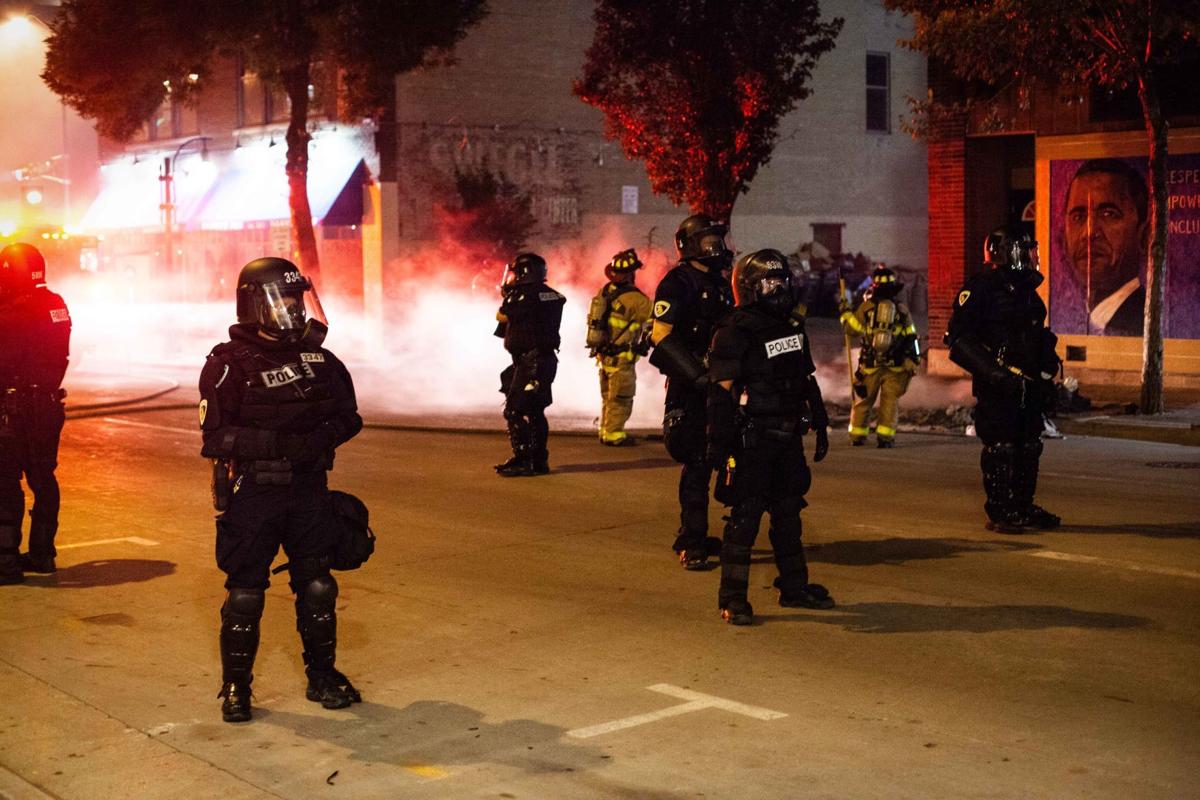 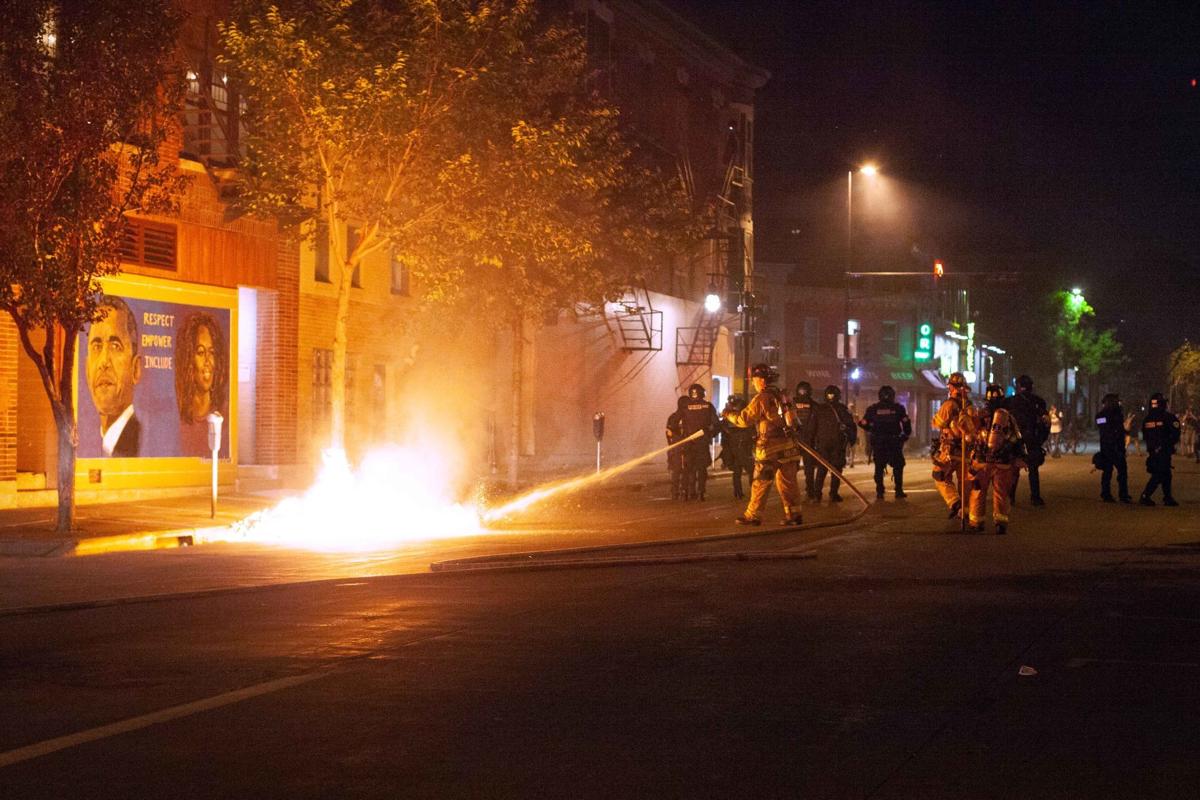 A firefighter extinguishes a trash fire set by protesters on West Gorham Street.

Another night of protests in Madison ended with tear gas, pepper spray, smashed windows, fires and looting Monday evening into the early morning hours Tuesday — with damage extending from State Street into the Capitol Square area.

Following a now-familiar pattern, the overnight destruction followed peaceful daytime protests against the police shooting of Jacob Blake in Kenosha Sunday. This time, the damage started just before 11 p.m. with a dumpster fire at the top of State Street. At least Walgreens, a liquor store and a glasses store were looted. Police responded with tear gas, pepper spray and sponge projectile rounds.

Madison police Sgt. Galen Wiering reported that six arrests were made, with one person armed with a handgun at the time of arrest, and investigators will seek to identify additional suspects.

Blake, 29, remained in serious condition Monday after Kenosha police shot him. A widely seen cellphone video made by an onlooker showed at least one Kenosha police officer shooting at Blake's back as he leaned into his SUV, which had his three children sitting in it. Seven shots can be heard in the video.

The Madison protest grew over the course of the night with just around 100 protesters at the beginning of the night and well over 1,000 later in the evening. At one point, the crowd filled two full blocks of State Street.

"We still here," one organizer told the crowd. "And they're still killing us."

Several dumpster fires were set throughout Downtown over the course of the night as protesters marched on State Street, East Washington Avenue and the Capitol Square. One of the fires was in a large metal dumpster around the size of a truck. Firefighters extinguished it as flames licked up against the side of a building on Gorham Street near State Street.

Protesters also started a fire in the entrance of the Wisconsin Manufacturing and Commerce Building, but it didn't take and quickly died down. Spray paint on the outside of the building read: "You have stolen more than we could ever loot."

The looting started on State Street around 11:30 p.m. after a smaller group of around 100 people split off from the larger protest. The group of around 1,000 continued to march, chanting "Black Lives Matter," "This is a not a riot, this is a revolution" and telling each other to "Stay together."

Broken glass bottles and the smell of alcohol littered the 400 block of State Street after looters broke into Badger Liquor and stole bottles of liquor. Looters also took merchandise from Warby Parker, a glasses and sunglasses store on State Street.

An hour and a half later at 1 a.m., items were stolen from the Walgreens on Capitol Square after the front doors were shattered. Many more businesses had windows shattered, including bars and restaurant on Main Street, the largely glass US Bank Plaza building and others on the Capitol Square.

Police came out in full riot gear — and a few even on horses — after the first set of looting on State Street. They functioned in small clusters and formed lines to defend some buildings, including the Dane County Courthouse and Chalmers Jewelers on East Washington Avenue.

The first clash between protesters and police happened at the intersection of East Washington Avenue and Blair Street, where police were defending Chalmers Jewelers after the store had its windows shattered.

Protesters and police briefly stood off with each other at the intersection. Then officers fired tear gas, sponge rounds from projectile launchers and pepper spray at the crowd, which dispersed and headed back to the Capitol.

Police just deployed tear gas and sprayed pepper spray at protesters at the corner of East Washington Avenue and Blair Street. They also shot what looked like sponge projectiles or fireworks at protesters. pic.twitter.com/6FvIQW0Wbz

Until at least 1:30 a.m., protesters and police played a game of cat and mouse, with police coming up behind protesters or cornering them with a police line and then using tear gas. Protesters would disperse, run away and then regroup.

Around 2:30 a.m., police arrested some protesters, putting one in an unmarked car, Wisconsin Watch reported.

Early on in the night, an appearance was made from a small group of anti-protesters in military attire, what looked to be assault rifles, other guns and what appeared to be a red Make America Great Again cap.

The police shooting of a Black man, Jacob Blake, in Kenosha set off protests in both that city and Madison. Here's the latest coverage of unre…

Scenes from three days of protests in Kenosha following the shooting of Jacob Blake.

A Baraboo man was arrested in the fatal shooting of a Reedsburg woman in Oconto County on Friday, the Oconto County Sheriff's Office reported.

Jacob Blake's father told the Chicago Sun-Times that his son now has “eight holes” in his body and is paralyzed from the waist down, though doctors don't know if the paralysis will be permanent.

With State Street businesses mostly boarded up, the worst damage occurred on Capitol Square, where vandals smashed windows at more than a dozen buildings, looted some stores and spray-painted slogans.

Doctors reported that a woman suffered some kind of paralysis after a hit-and-run crash Downtown on Sunday night, Madison police reported.

Shootings and fights continue to keep Madison and Fitchburg police busy, even aside from two gunfire incidents Monday involving upwards of 30 rounds, including some that entered homes and hit vehicles and left one man injured.

An outside group released 69 recommendations for the the Madison Police Department to "facilitate peaceful protests and prioritize life over property while striving to protect both."

Protesters lit several dumpsters on fire throughout Madison's Downtown Monday night and early Tuesday during protests against the police shooting of Jacob Blake in Kenosha.

Hundreds of protesters march down State Street late Monday night to take a stand against racism, police brutality and the police shooting of Jacob Blake in Kenosha.

A firefighter extinguishes a trash fire set by protesters on West Gorham Street.