Long seen as one of the country’s more progressive departments and a draw for those interested in community policing, the Madison Police Department for the first time in recent memory has failed to meet its recruiting goal.

Madison this year has managed to hire only 24 of the 34 people it was authorized to add in a budget year that reduced the number of sworn officers by four, after hiring 50 in each of the past two years.

Police chief Shon Barnes points to the COVID-19 pandemic and a souring of attitudes toward law enforcement in the wake of George Floyd’s murder as being among the main factors hurting recruitment. But he also contended his agency is in a better position than most in an industry that, nationwide, was struggling to attract officers years before the COVID-19 pandemic and racial justice protests.

Barnes said the department “greatly reduced our recruiting efforts” amid the pandemic, canceling recruiting trips to colleges and in some cases arriving at colleges only to be told in-person meetings were off. Some recruits also didn’t feel comfortable coming in to complete parts of the application that had to be done in person, such as the physical strength tests, he said.

At the same time, “certainly I think public sentiment has something to do with” lower recruitment.

“People were unsure if they wanted to come into a profession that has some degree of uncertainty as to what the outcome would be,” he said, with calls to “defund the police” raising questions among potential applicants about job security.

Like other departments, the Madison Police Department has seen its number of applicants fall in recent years. In 2014, 888 people applied. By last year, that number was 510.

A September 2019 report by the Police Executive Research Forum, a police research and policy analysis nonprofit, found a range of reasons for what it called the police “workforce crisis,” including a broader range of career opportunities in a robust economy, the retirement of officers hired during the federally funded boost in crime fighting in the 1990s, increasingly negative attitudes about police after the killing of Michael Brown in Ferguson, Missouri, in 2014, and a reluctance among young adults to embrace police departments’ “quasi-military organization structure.”

Such trends continue, according to Alexander Weiss, a police staffing consultant who also pointed to the effects of the pandemic and growing anti-police sentiment since last year.

“Except recruitment is also a function of pay and benefits,” he said. “They can help to overcome these misgivings.”

Jeremy Wilson, a criminal justice professor at Michigan State University who studies police staffing, said police are expected to tackle a greater range of crimes, including cyber crimes and product counterfeiting, at the same time the public is demanding a better-trained, more diverse police force.

“It’s really an incredible challenge,” he said. “Even the agencies that are getting them (applicants) aren’t getting the ones that they would traditionally seek.”

For this year’s two Madison police academies, the department had 288 applicants to choose from, and Barnes said that wasn’t enough to find 34 people who could meet what he characterized as the department’s especially high standards.

“Our selection process is quite rigorous,” he said. “I don’t just want people to fill seats. I want the right people. I think our community deserves that.”

Madison has seen sharp increases in gunfire, stolen vehicles and some other specific crimes in recent years, but crime overall and the number of calls for service the department gets have remained stable. Madison also has about the same number of police as other cities its size.

Still, the department has pointed to a 2019 staffing study showing the need for 18 more patrol officers, and as of 2020 former chief Mike Koval moved 12 positions in neighborhood and community policing and other specialized roles back to patrol, citing needs there. Police including Madison police union president Kelly Powers have pointed to the time demands of increasingly complex cases and the proliferation of technology such as social media and surveillance footage that can help in investigations but also take time to review.

The department is also continuing to regularly shift to a “priority calls only” status for chunks of time during the week, meaning it doesn’t have enough staff to respond to all calls and can send officers only to the most serious. On Aug. 14, police on their way to a call about a loud party on the city’s Near West Side were redirected to a call about a large fight on the Southwest Side. Minutes later, a 17-year-old was shot and killed outside the party. The department was not on priority-calls-only status at the time.

Woman in video allegedly having sex with Madison cop in squad car not a prostitute, chief says

Barnes has said it’s unfair to suggest that if police had continued on to the party things might have turned out differently, and that it’s not unusual for police to triage calls. He has also repeatedly said he doesn’t know of any police chief who wouldn’t want more officers.

With Madison set to absorb 90% of the town of Madison and about 5,000 of its inhabitants on Oct. 31, 2022, Mayor Satya Rhodes-Conway has proposed a 2022 budget that adds eight sworn positions. She also would add a “police reform and innovation director” to improve crime data collection and analysis as part of Barnes’ effort to use data to better align police services with community needs.

In addition to recruitment woes, Madison, like other departments, has also seen pressure from the other end of the staffing spectrum: resignations and retirements.

Powers said that anecdotally what he’s heard from departing officers is a sense that, in the current environment, it’s “not worth it” to stay on.

Those financially able to retire fear being involved in a use-of-force situation in which they do everything according to the law and their training and still get singled out by the public as having done something wrong, he said.

For those leaving before retirement age, “I’ve had a number of people tell me this is not what I came here for,” Powers said, explaining that in Madison’s “calls for service-type package,” officers can lack opportunities to do neighborhood policing and other more proactive police work and find themselves stuck in patrol.

Barnes said few departing officers fill out exit surveys and not all opt to participate in exit interviews. For the ones who have, common reasons for leaving include other jobs and spouses who worry about the inherent danger of police work.

The existential questions that come with a pandemic that’s killed more than 700,000 people have also caused workers across industries to question what’s important to them, he said, and police with enough years to retire might question the value of continuing to work when life can be short.

But he also pointed to a frustration among departing officers about the criminal justice system generally — from funding of police to how victims are treated to a “catch and release” approach in the courts, whereby people are able to commit multiple crimes because they’re repeatedly released from custody by judges who require no bail or small amounts of bail.

That perceived soft-on-crime approach comes as local social-justice activists have for years been pushing sympathetic local elected officials to release defendants — especially Black defendants — from the Dane County Jail and to abandon a jail-renovation project. Those in the broader prison-abolition movement have also collected donations to bail defendants out themselves.

Officers are “having a hard time trying to figure out, trying to reconcile, ‘What am I actually doing here?’” Barnes said. “’How am I actually making a difference. I did what you asked me to do. I found the bad guy. I didn’t hurt anyone. He or she wasn’t able to hurt anyone. Put the handcuffs on, I took them back and they’re out before I can finish my report.’”

A 16-year-old boy from Madison was identified as the shooter from the Dec. 9 incident and arrested during the execution of search warrants.

A woman caused a disturbance at a Far West Side hotel overnight, stole a worker’s vehicle, crashed it, and bit an officer while being arrested, Madison police reported.

The stolen car was left on Schenk Street, and a witness told officers that four people got out of the car and ran behind some houses.

A teen stole a woman’s purse at West Towne Mall, and later with a second teen stole and crashed a car while the owner picked up food on Saturday, Madison police reported.

Two armed men were sought in an attempted carjacking of a woman’s vehicle on the South Side on Monday afternoon, Madison police reported.

More than 100 vehicles have been stolen in Madison this year, most of which were left running unattended while warming up, police reported.

The car was found nearby shortly after with the child safe inside.

Two suspects fled a stolen vehicle after causing a crash Monday afternoon on the Far East Side that injured a woman, Madison police reported.

Madison police have released a surveillance video image of a thief who stole a 75-year-old woman's car last month as she walked into a food pantry to make a donation.

Two cars were stolen this week after the owners left them running outside businesses, Madison police reported.

Waunakee police arrested a man on Sunday and recovered a stolen vehicle after a brief pursuit, authorities reported.

Man steals woman’s car at gunpoint when she arrives at her Southwest Side home, Madison police say

A man stole a woman’s car at gunpoint when she arrived at her Southwest Side home early Tuesday morning, Madison police reported.

Knife-wielding man arrested after jumping into road, lying in front of vehicle on East Side, Madison police say

A knife-wielding man was arrested after jumping into the road and laying in front of a vehicle on the East Side on Sunday night, Madison police reported.

Lt. Reginald Patterson is a 15-year veteran of the department and head of patrol in the city's West Police District. 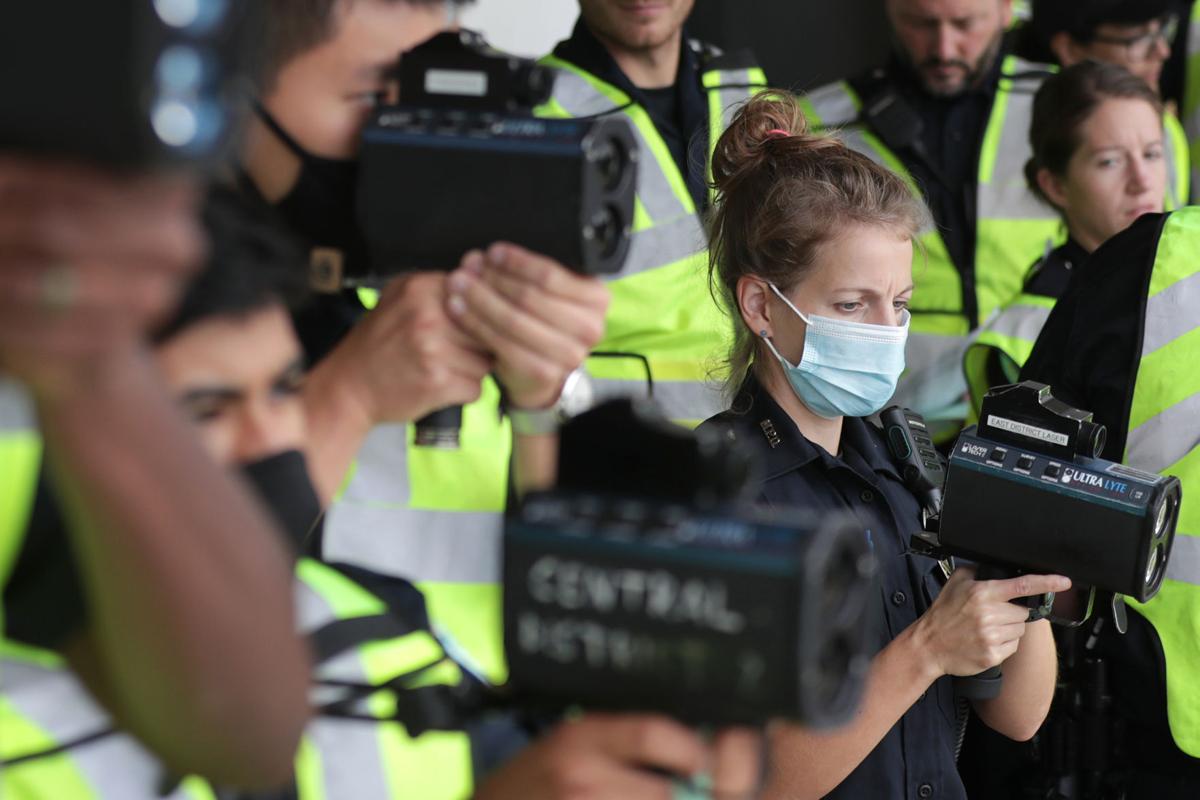 Madison Police recruit Molly Dietzel practices using a speed-enforcement laser at the department's Training Center in Madison on Friday. Dietzel is one of 24 recruits this year to the department, 10 fewer than budgeted for. 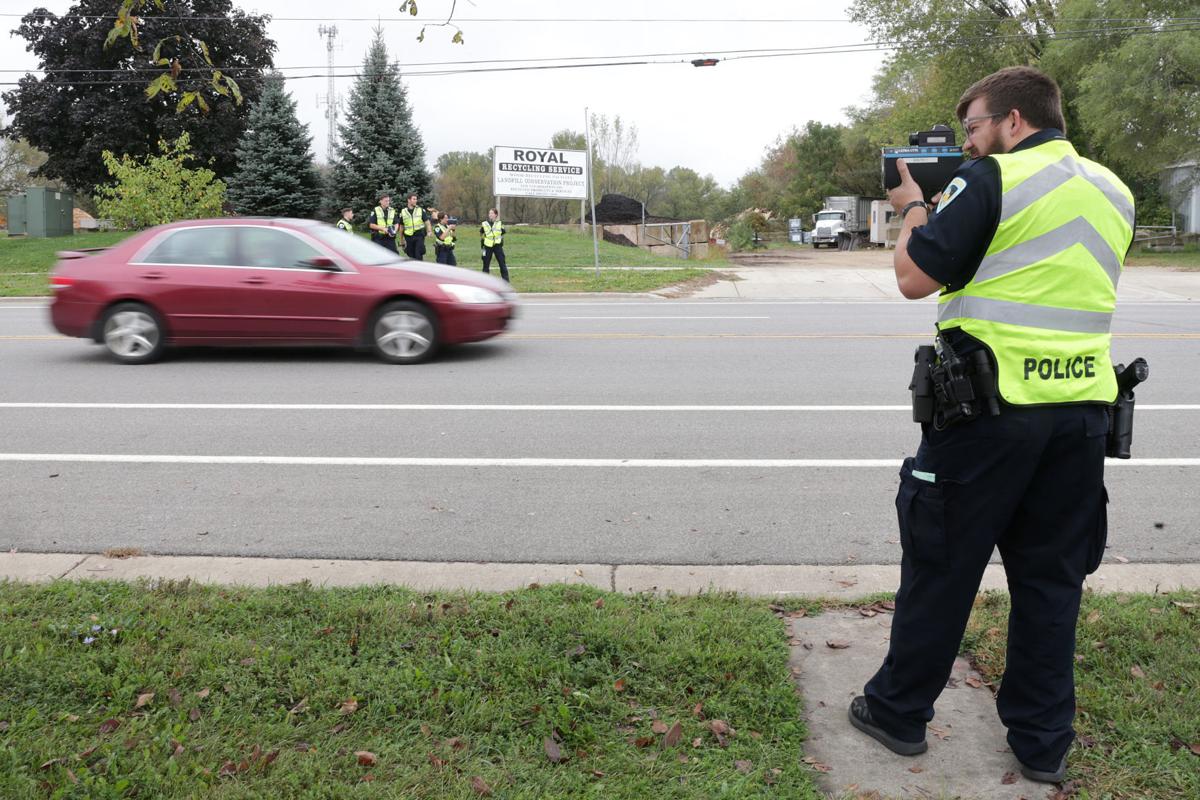 Madison police recruit Kevin Giroux trains a speed-enforcement laser at a vehicle Friday. Applications to the department have been dropping for years. 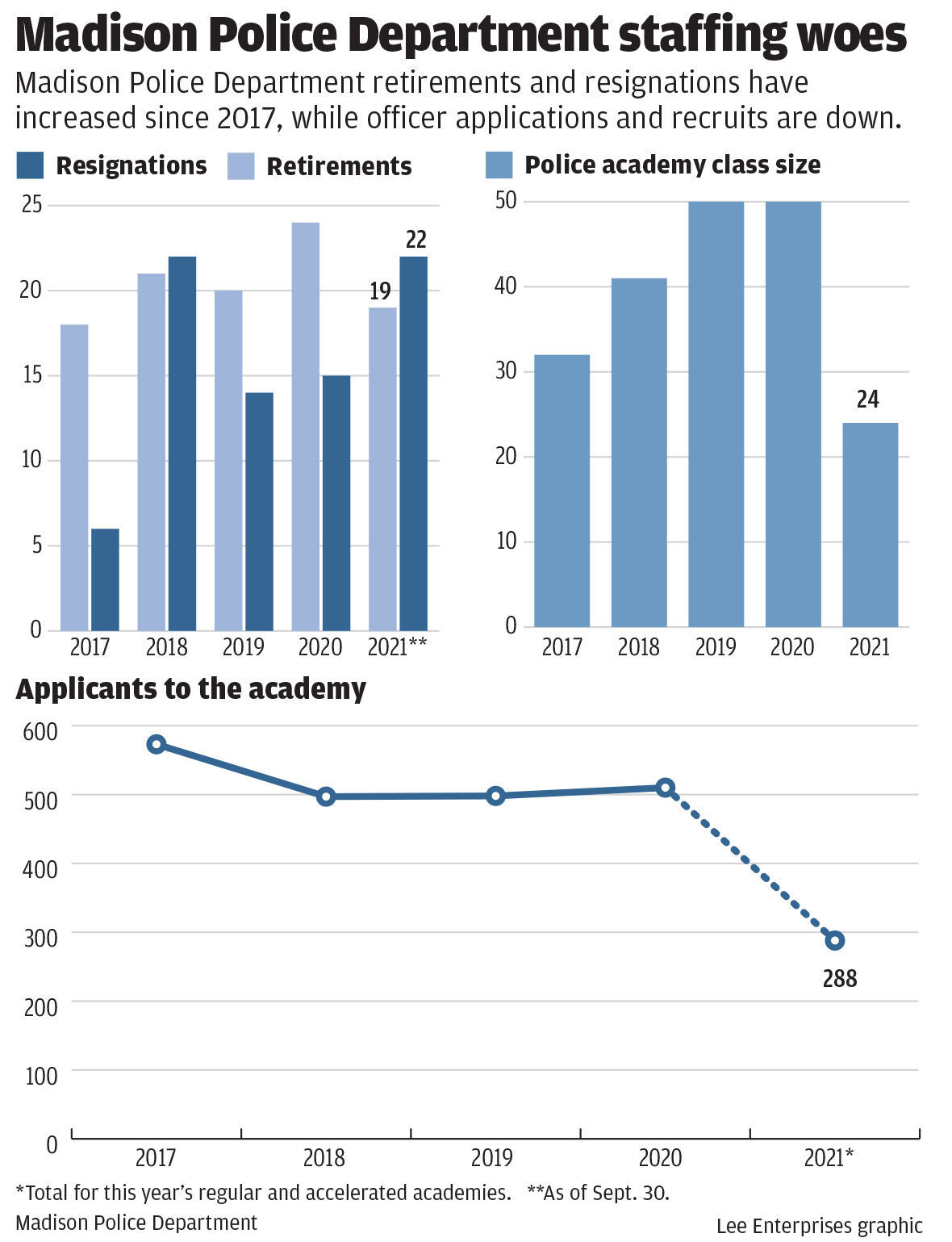 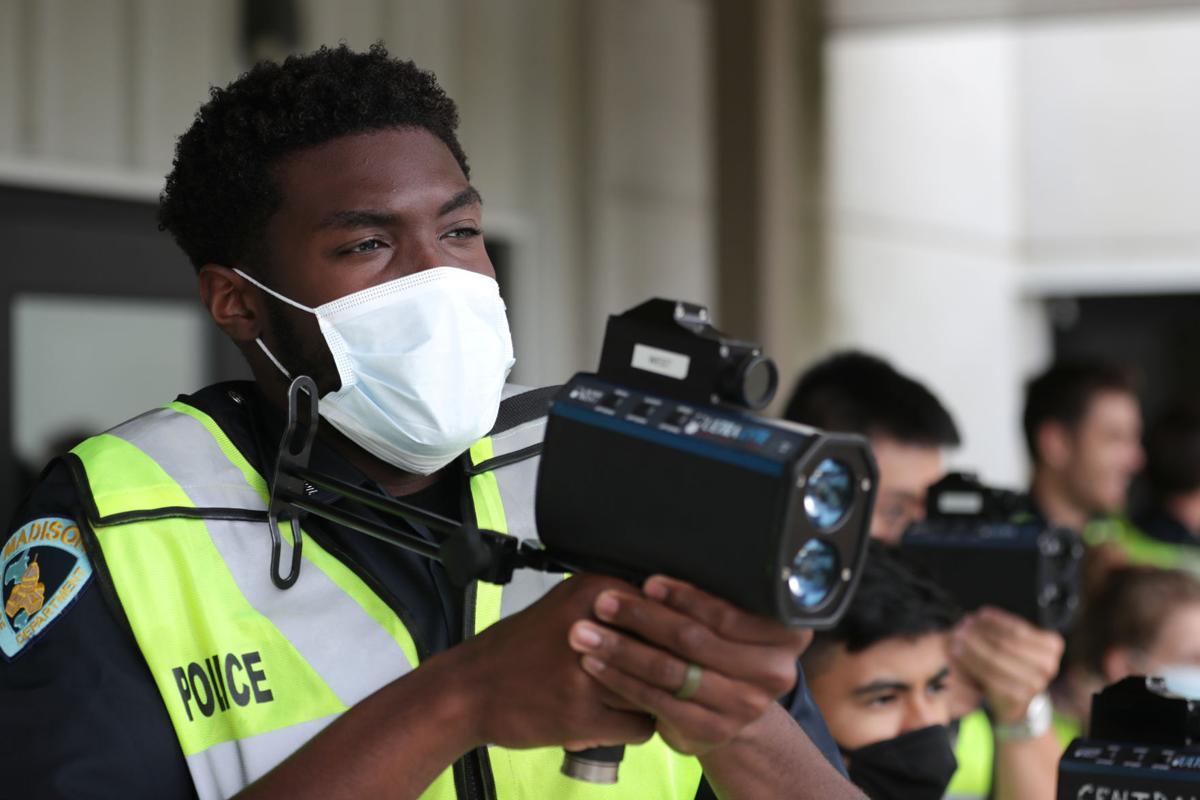 Madison police recruit Zavier Peart practices using a speed-enforcement laser at the department's Training Center. Madison and departments across the country are looking to diversify their departments. Madison's department is already more diverse than many in the state. 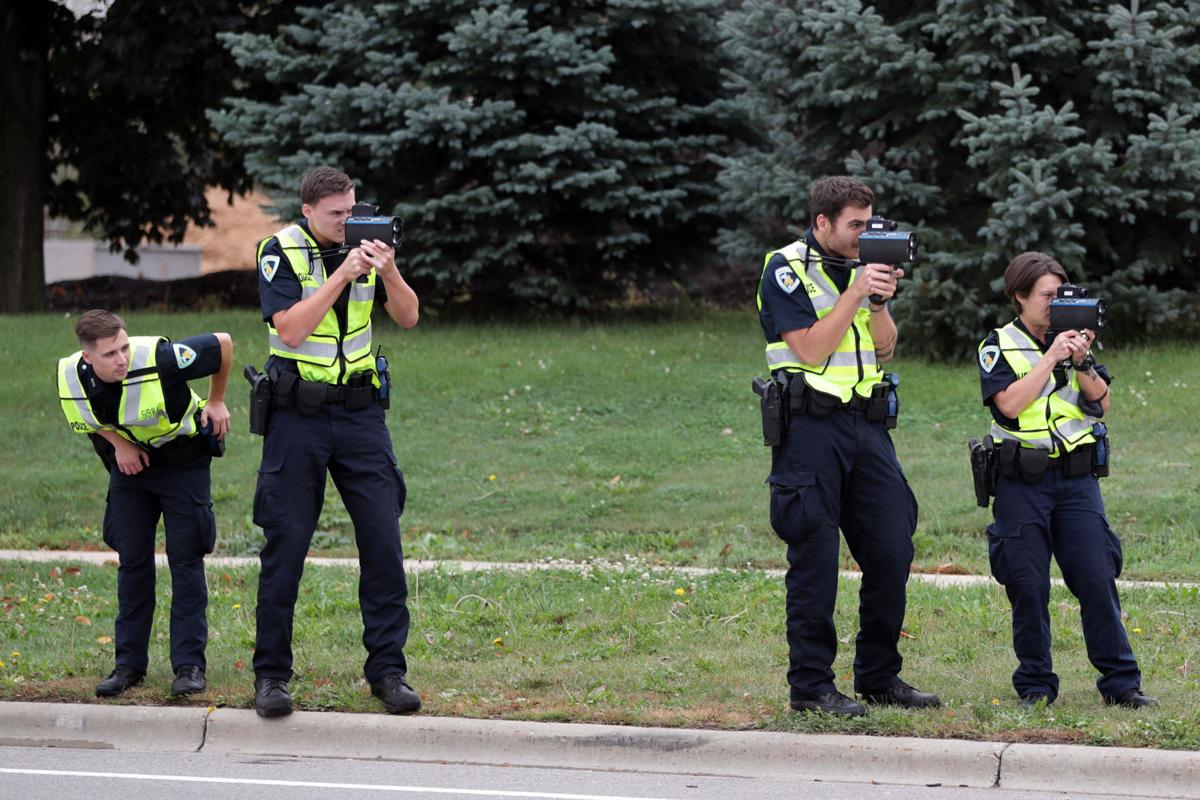 Madison police recruits at the department's Training Center on Femrite Drive on Friday. 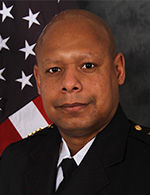