On the second day of a five-day painting process, Madison-based artist Jerry Butler stood back and watched two inmates finish up their 30-minute paint shifts while trying to keep their juvenile detention center uniforms free of stains.

The artist and some 12 youth inmates came together to create a mural in the Dane County Juvenile Detention Center‘s admissions office, the first place youths see when they are admitted to detention.

John Bauman, Dane County Juvenile Court administrator, said this is the sixth mural to take up space on walls within the detention center. Each mural is designed by inmates then in detention, along with an artist funded by the Madison Public Library.

Butler, the center’s artist-in-residence, first met with the children in December to plan out the mural. Butler used their ideas and sketches to create one cohesive piece, which the inmates painted on the admissions office wall.

“The kids were so excited, and they worked very hard,” he said. “They were very precise even when it came to the details.”

Butler said the children probably completed 90% of the mural, and his job is to offer guidance along the way and do some final touch-ups. Whenever he works with youth, he said he hopes to create a masterpiece while also teaching something about life.

“I want the kids to learn something about what they can get along the way that could help them,” Butler said. “I want them to have a good time, and respect the process.”

The Wisconsin State Journal was invited to observe the project but agreed not to identify any of the inmates because they are juveniles.

Butler even said he learned a lot throughout the process seeing all of the support for the youth from the detention center and library staff.

“It’s exciting work, and watching the kids work so hard teaches us something also,” he said. “They care about making this place look nicer for people coming in.”

Jesse Vieau, a teen services librarian with the Madison Public Library who also works with the Teen Bubbler program, has been involved with the detention center and the murals for about six years. He said every day at the center is different with youth cycling through constantly.

With potential gap in funding for juvenile detention centers, counties in 'holding pattern'

Vieau put together a webpage and a video of the project on the Teen Bubbler website.

Butler said he wanted to make sure the mural was bright enough, avoiding dark colors so it could make the room feel light.

The murals are a way for the inmates to express themselves, Vieau said, when a lot is taken from them in detention. He said while the murals are seemingly all about the final product, organizers also focus on talking to youth along the way, learning who they are and who they can be out in the community.

“Engaging kids is not an easy task until you have their interest and their trust,” he said. “The only power they have is to use their voice.”

The first mural went up in 2015 in the center’s visitation room. Bauman said the goal each time is to pick a place the inmates frequent. He said they picked the admissions office because the youth need “something better and inspiring” when they first walk in.

A motorist armed with a gun confronted three employees of a private snow plowing company Downtown Monday morning, apparently not pleased with how they were operating their plow truck, Madison police reported. 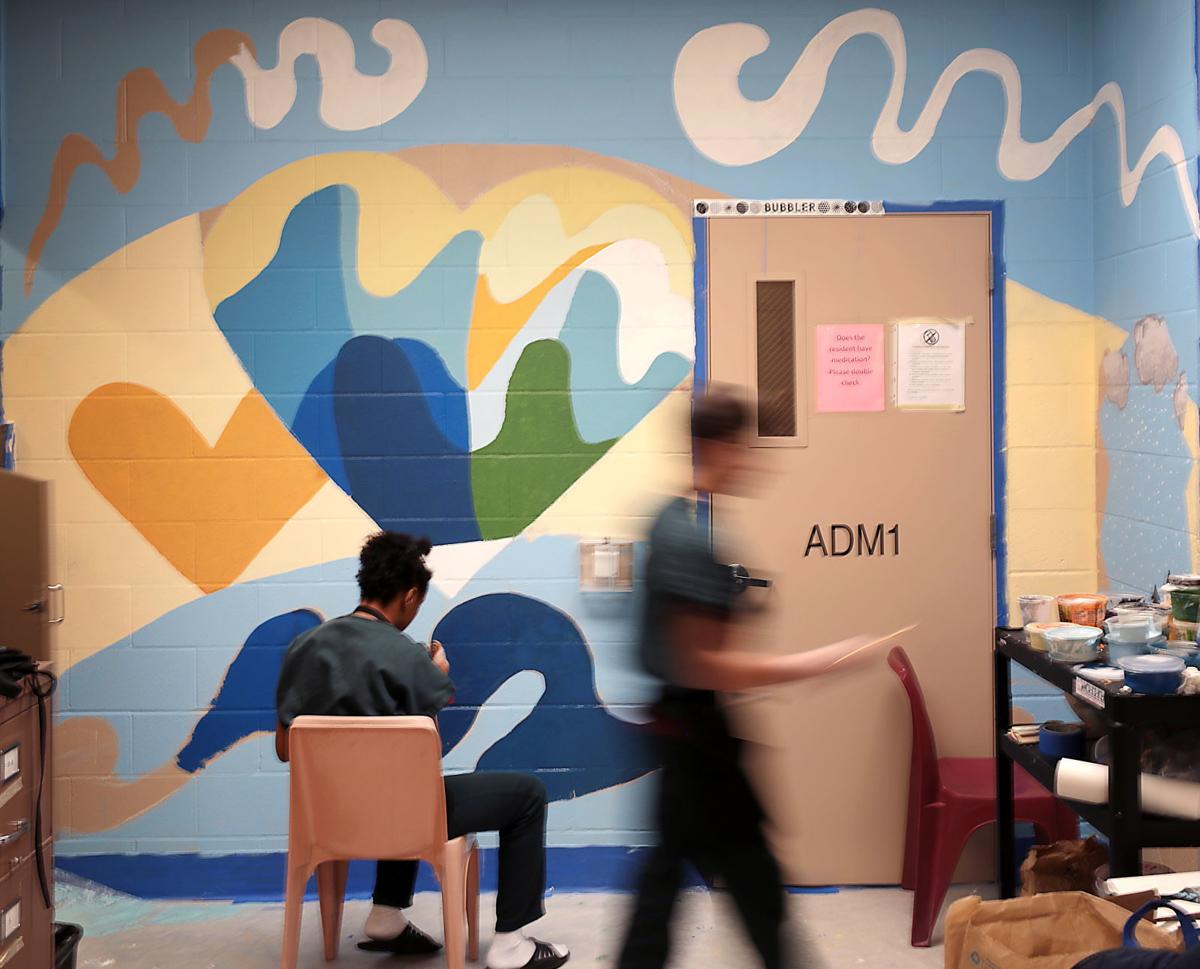 Youths housed at the Dane County Juvenile Detention Center work to complete a mural on a wall of the facility's admissions office. 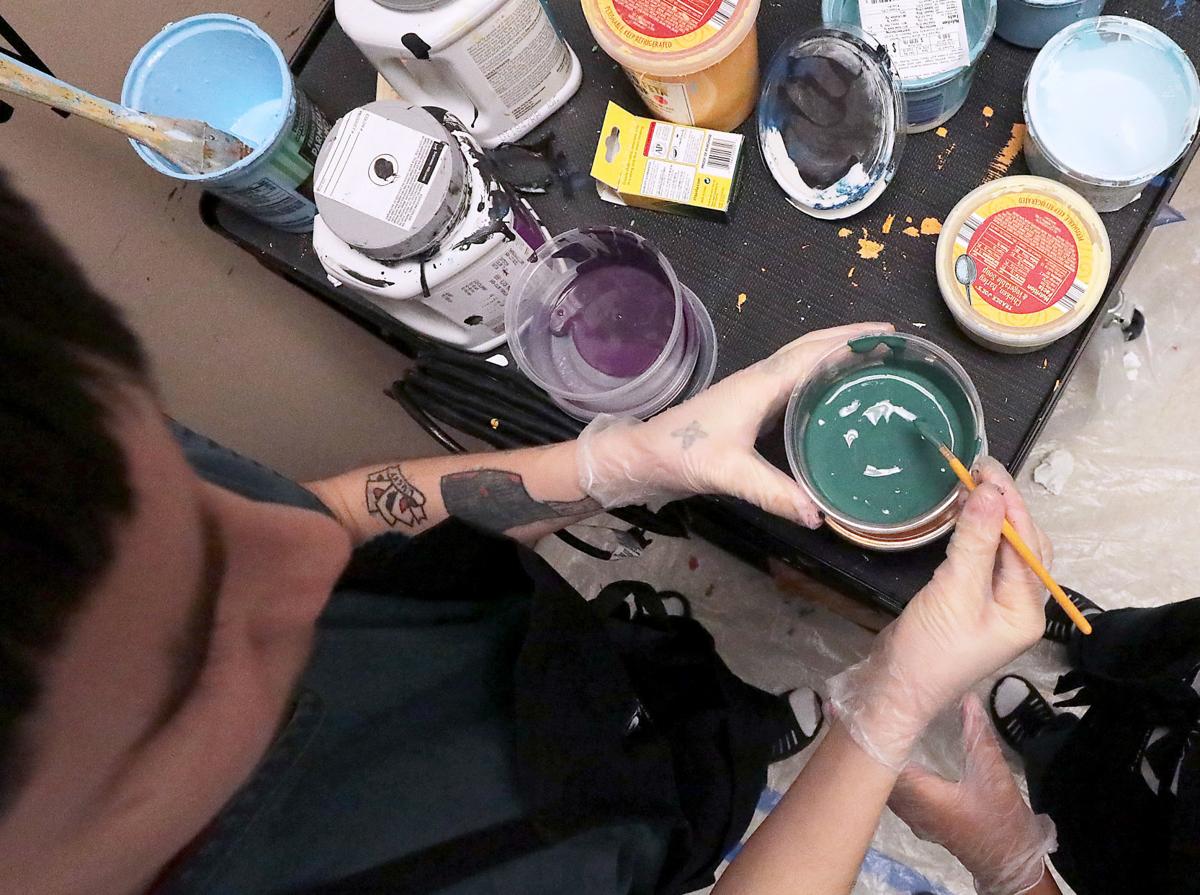 A child at the Dane County Juvenile Detention Center mixes paint for the sixth mural project in the facility. 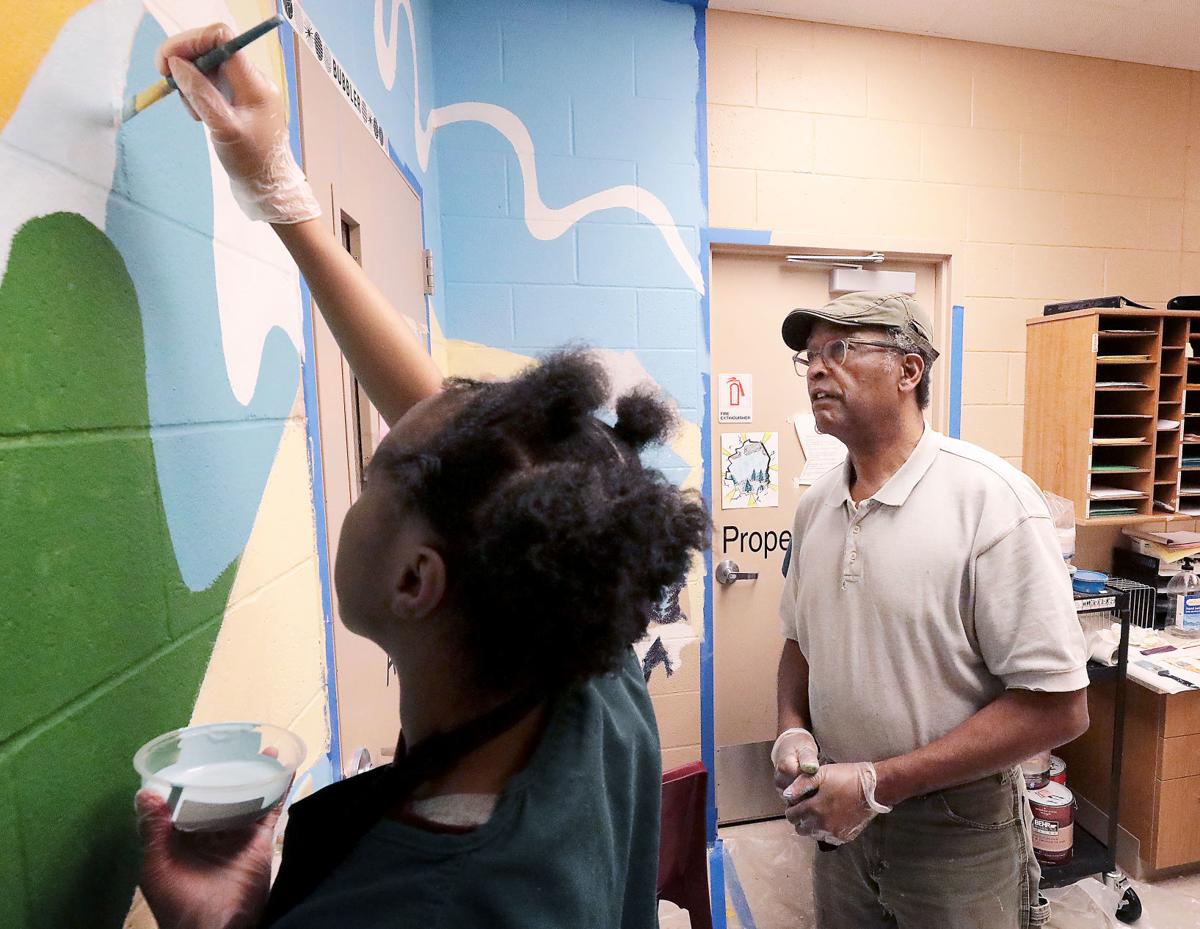 Madison artist Jerry Butler watches the progress of a mural being painted by one of the youth. 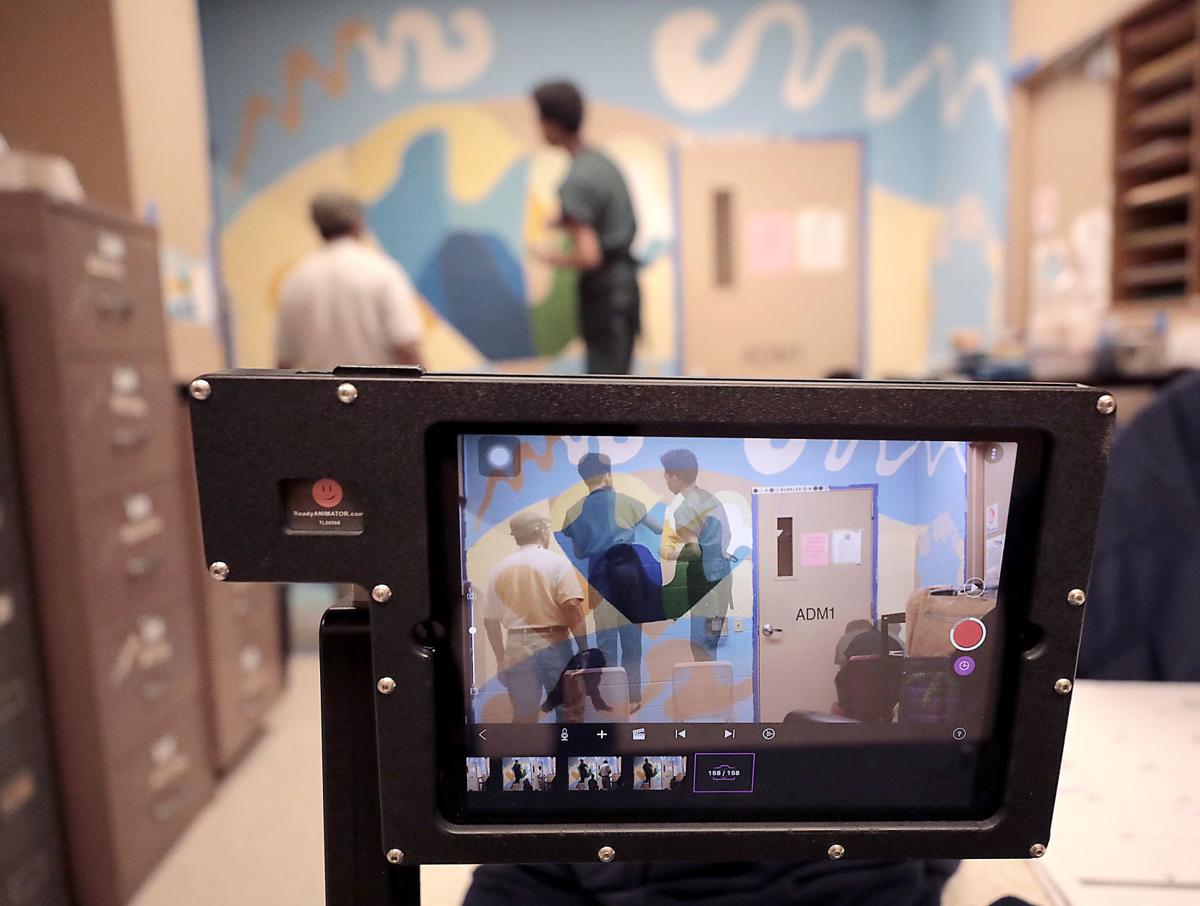 A time-lapse camera records the progress of the mural project. 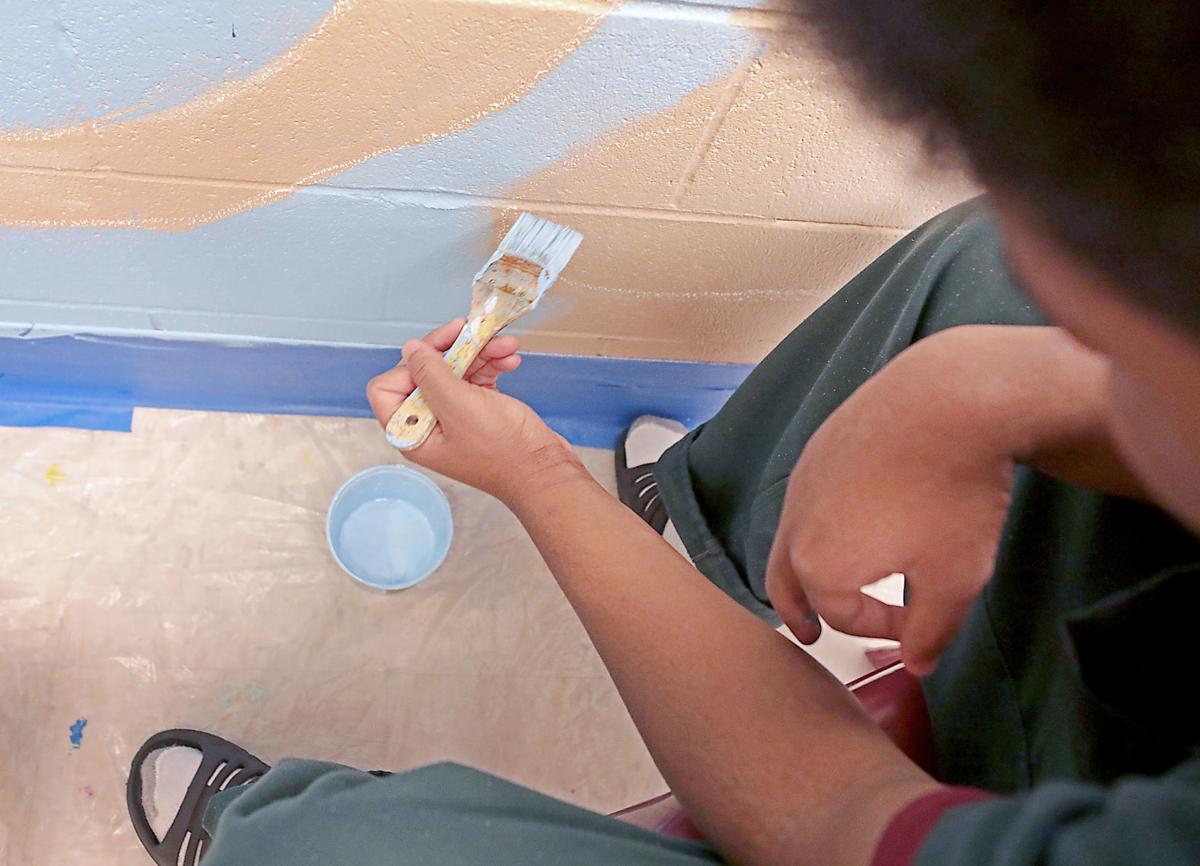 A child housed at the Dane County Juvenile Detention Center adds to the mural project.