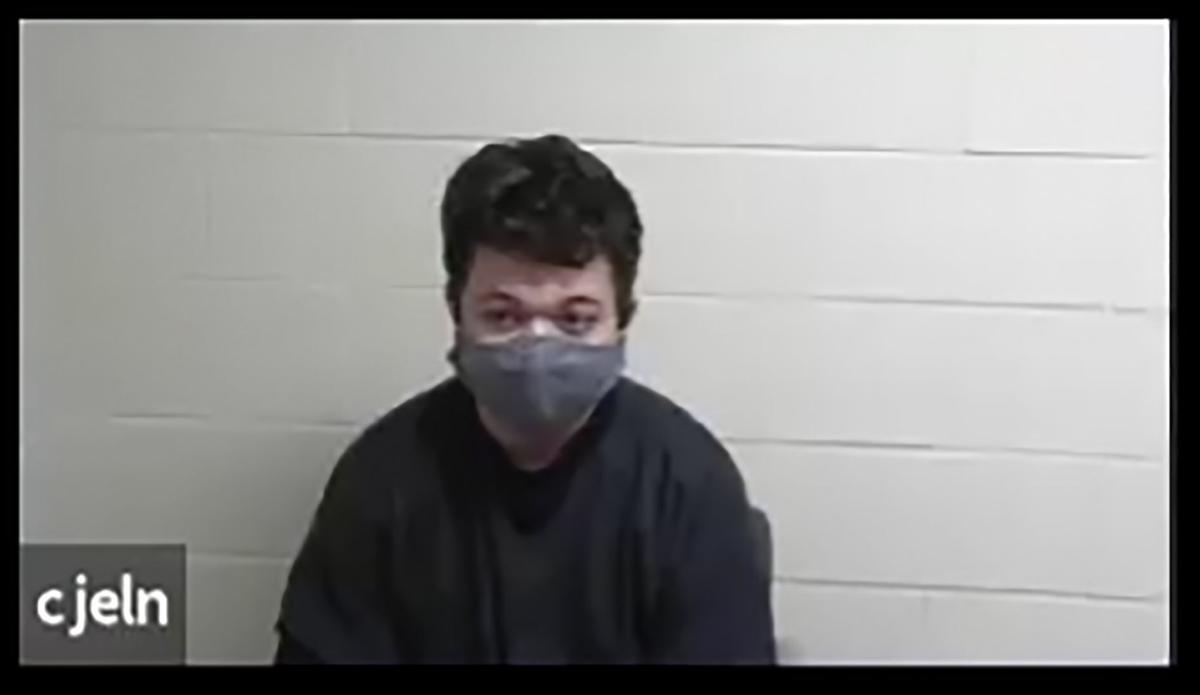 In this screen grab from livestream video, Kyle Rittenhouse appears via video during a hearing Friday at the Nineteenth Judicial Circuit Court in Waukegan, Ill. 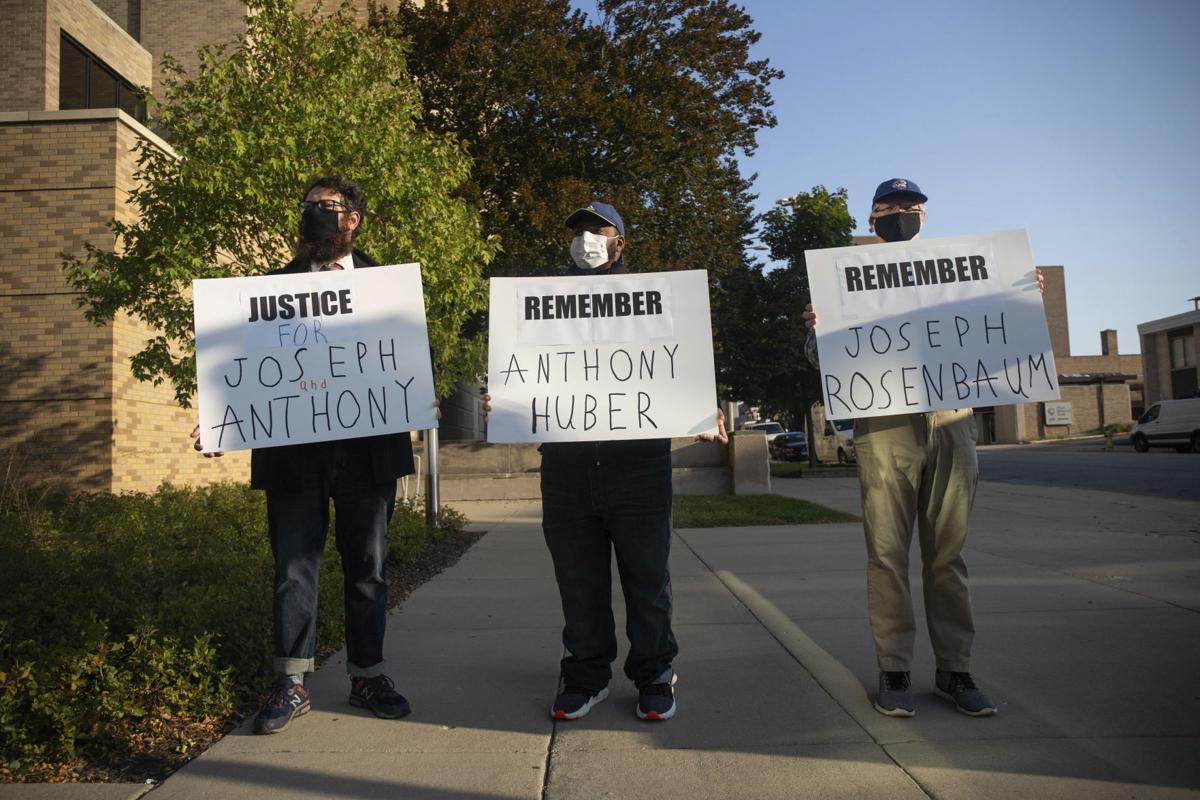 Matt Muchowski, Vance Wyatt and Donald Blake hold signs with the names of Joseph Rosenbaum and Anthony Huber outside the Lake County Courthouse in Waukegan, Ill., during Kyle Rittenhouse's second extradition hearing Friday morning. Rittenhouse is accused of fatally shooting Rosenbaum and Huber and injuring another during a protest sparked by the police shooting of Jacob Blake in Kenosha. 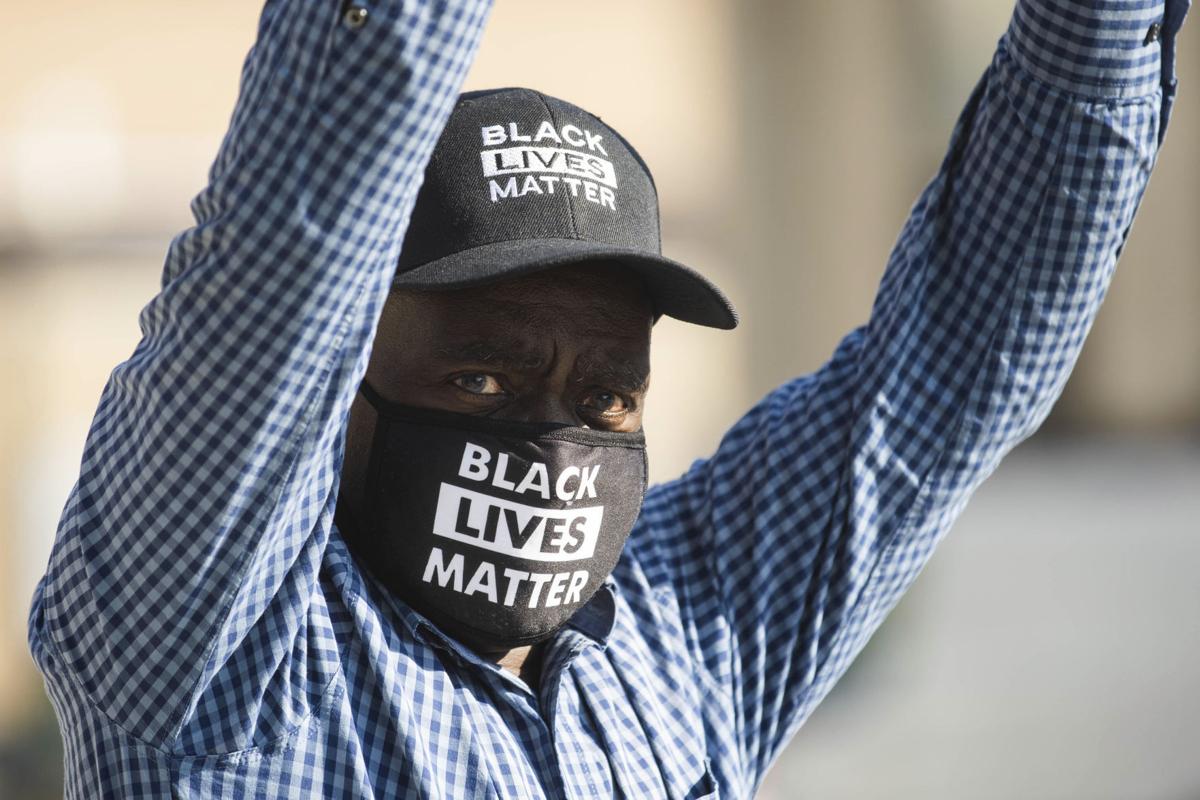 WAUKEGAN, Ill. — A 17-year-old in Illinois accused of killing two protesters days after Jacob Blake was shot by police in Kenosha fought his return to Wisconsin on Friday to face homicide charges that could put him in prison for life.

Kyle Rittenhouse surrendered to police in his home in Antioch, Illinois, a day after prosecutors say he shot and killed two protesters and wounded a third on the streets of Kenosha on Aug. 25. His attorneys have said Rittenhouse acted in self-defense and have portrayed him as a courageous patriot who was exercising his right to bear arms during unrest over the police shooting of Blake, who is Black.

Rittenhouse attorney John Pierce said during a hearing Friday that he intends to fight extradition. Judge Paul Novak gave the defense 14 days to review papers and file pleadings ahead of an Oct. 9 hearing.

Pierce asked for a month to prepare arguments challenging extradition that he said involve “issues of some complexity, frankly that have not arisen in the country for some time.”

“We intend to challenge extradition by writ of habeas corpus,” Pierce said.

He didn’t provide further details at the hearing about the basis for the challenge. The delay in returning Rittenhouse to Wisconsin is the second in the case.

Mike Nerheim, the Lake County state’s attorney, said after the hearing that Illinois Gov. J.B. Pritzker had signed a warrant to return Rittenhouse to Wisconsin after a request was made by Gov. Tony Evers, a fellow Democrat. Rittenhouse’s attorney asked for a chance to review the warrant, which Nerheim said he had received Friday morning.

Nerheim said he didn’t know on what basis Rittenhouse would challenge extradition.

“We’re ready to proceed,” he said.

David Erickson, a former state appellate judge who teaches at Chicago Kent College of Law, said challenges to extradition are rare. When challenges do occur, he said there are generally two arguments: that no crime was committed in the other state or that the defendant was not the person who committed the crime.

But Rittenhouse’s attorneys’ stated plan to pursue a habeas corpus challenge, which is generally defined as an argument that there are legal grounds for a defendant’s release, is even further outside the norm, Erickson said.

Rittenhouse’s attorneys and fundraising team have publicly framed him as a defender of liberty, rightfully carrying a weapon amid rioting.

When extradition is challenged, a judge will hold a hearing to consider arguments and witness testimony, Erickson said. If the court doesn’t rule in Rittenhouse’s favor, he could appeal to the Illinois Supreme Court, but Erickson said he doubts it would take up such an appeal because the likeliest reason to overturn an extradition ruling would be a judge abusing his or her discretion.

Novak seems to be approaching the case with caution by giving Rittenhouse’s team weeks to prepare their arguments, Erickson said.

Rittenhouse attended the hearing via a video feed and did not speak other than to say, “Good morning your honor” to the judge. He wore a blue face mask and a black sweatshirt.

Pierce also requested that he be allowed to bring a laptop into the juvenile detention facility in Vernon Hills where Rittenhouse is being held, despite a ban on electronic equipment, so they could review video evidence together from the night of the shootings. The judge said he would consider it.

If convicted of first-degree homicide, Rittenhouse faces a mandatory life in prison sentence.

To some, Rittenhouse is a domestic terrorist whose very presence with a rifle incited the protesters in Kenosha. To others — who have become frustrated with demonstrations and unrest across the country — he’s seen as a hero who took up arms to protect businesses, including some that were damaged during unrest the previous two nights.

According to prosecutors and court documents, Rittenhouse shot and killed 36-year-old Joseph Rosenbaum, of Kenosha, after Rosenbaum threw a plastic bag at Rittenhouse, missing him, and tried to wrestle his rifle away.

While trying to get away in the immediate aftermath, Rittenhouse was captured on cellphone video saying “I just killed somebody.” According to the complaint filed by prosecutors, someone in the crowd said, “Beat him up!” and another yelled, “Get him! Get that dude!”

Video shows that Rittenhouse tripped in the street. As he was on the ground, 26-year-old Anthony Huber, of Silver Lake, hit him with a skateboard and tried to take his rifle away. Rittenhouse opened fire, killing Huber and wounding Gaige Grosskreutz, of West Allis, who was holding a handgun.

Rittenhouse’s extradition might not be an issue at all if he had been arrested in Kenosha the night of the shootings. Cellphone video that captured some of the action shows Rittenhouse afterward walking slowly toward a police vehicle with his hands up, only to be waved through by police. He returned to his Illinois home and turned himself in soon after. Police later blamed the chaotic conditions for not arresting Rittenhouse at the scene.

The killings happened two days after a white Kenosha police officer shot Blake seven times in the back, leaving him paralyzed from the waist down and sparking outrage after video of the shooting was posted online. A Wisconsin Department of Justice investigation into that shooting is ongoing. The three responding officers are on leave.

Pierce has described Rittenhouse not as a vigilante, but as a model citizen who was cleaning graffiti from a vandalized high school before he received word from a business owner seeking help to protect what was left of his property after rioters burned two of his other buildings.

Pierce and Wood did not respond to messages ahead of Friday’s hearing.

The Associated Press and Kenosha News contributed to this report.

Scenes from three days of protests in Kenosha following the shooting of Jacob Blake.

Watch Now: A look back at this week's protests and cleanup in Kenosha

Demonstrations continued this week in Kenosha, Wisconsin, over the police shooting of Jacob Blake. This is a day by day visual review of scene…

Demonstrators gathered on Library Mall Saturday to demand the arrest of the Kenosha police officer who shot Jacob Blake seven times in the back.

It took three days, an outpouring of anger in the streets and an NBA boycott before authorities investigating the police shooting of Jacob Blake in Kenosha started answering some of the most basic questions about what happened.

Southwest Side residents wake up, scare away burglars who steal vehicle to flee, Madison police say

Southwest Side residents woke up Thursday night to find burglars in their house, causing the suspects to flee in a car they stole from the residence, Madison police reported.

Four gunfire incidents kept Madison and Fitchburg police busy over the weekend, with two houses and a business sign struck by bullets.

A wanted man was arrested with a stolen handgun on the Far East Side on Sept. 20 after ramming a squad car and another vehicle while trying to flee, Madison police reported

Madison police have released surveillance photos of a burglar who used rocks to shatter a Near East Side gas station door and steal cartons of cigarettes on Sept. 3.

In this screen grab from livestream video, Kyle Rittenhouse appears via video during a hearing Friday at the Nineteenth Judicial Circuit Court in Waukegan, Ill.

Matt Muchowski, Vance Wyatt and Donald Blake hold signs with the names of Joseph Rosenbaum and Anthony Huber outside the Lake County Courthouse in Waukegan, Ill., during Kyle Rittenhouse's second extradition hearing Friday morning. Rittenhouse is accused of fatally shooting Rosenbaum and Huber and injuring another during a protest sparked by the police shooting of Jacob Blake in Kenosha.