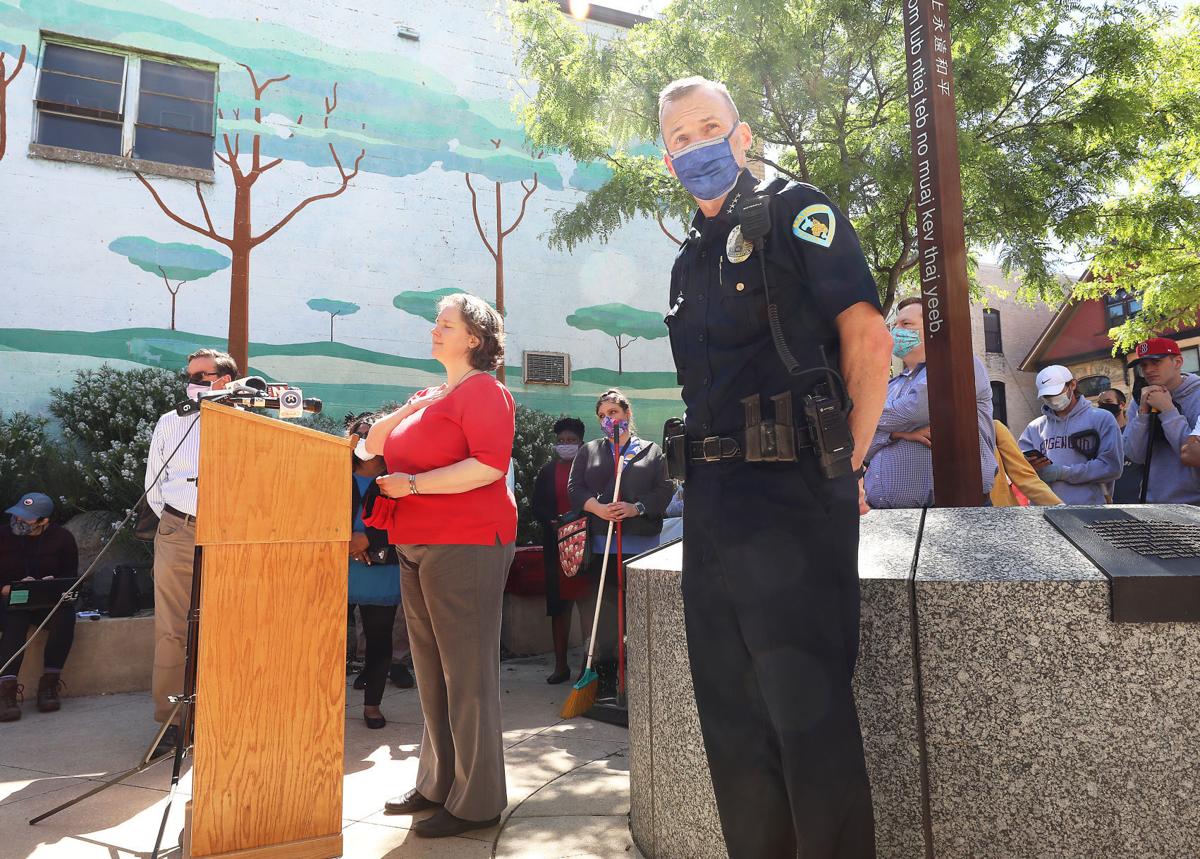 Vic Wahl, right, has served as acting police chief since Sept. 30. He is seen here with Madison Mayor Satya Rhodes-Conway after a night of vandalism and looting in May. 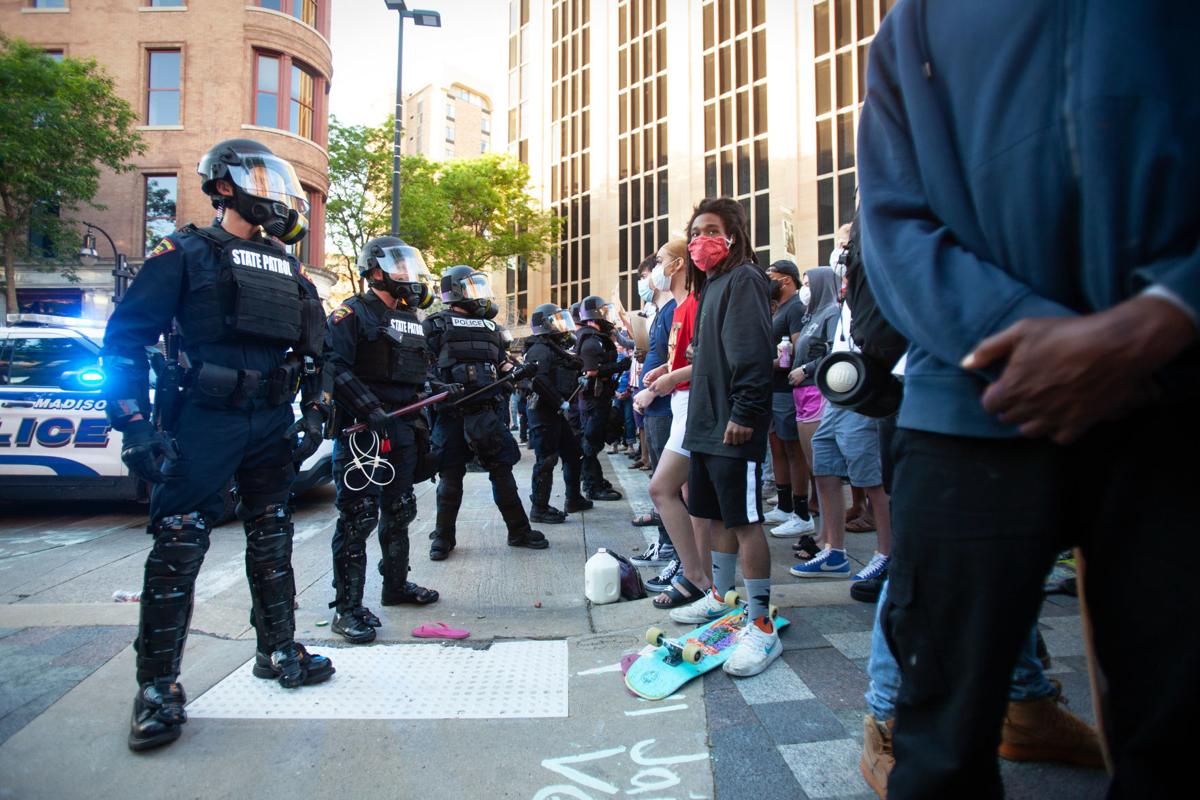 Madison police and Wisconsin State Patrol officers stand off with protesters at the top of State Street May 30. Two police oversight measures being considered by the city may conflict with some powers of the Madison Police and Fire Commission, the commission's attorney says.

Amid an ongoing pandemic and almost daily protests against police in the wake of the death of George Floyd, there remains the not-so-little matter of hiring a permanent Madison police chief nine months after the position’s most recent occupant — a lightning rod for local police reformers and critics — abruptly resigned.

On Thursday, the body charged with the hire announced a series of measures to gather public input, starting with two online meetings this month.

The Madison Police and Fire Commission also said it is designing a survey and is planning to work with the Massachusetts Institute of Technology-affiliated Local Voices Network, which brings small groups of people together around an internet-connected digital recording system to discuss, with the help of a facilitator, local issues. Journalists and others can then use key words to search the conversations for patterns and insights.

The commission also plans to seek input through neighborhood associations, community centers, faith-based organizations and other community groups, and possibly through call-in discussions on local radio shows and webcasts, according to a statement dated Wednesday.

“We are committed to listening to all residents in the city of Madison,” the commission said.

Greg Gelembiuk, a member of the citizens committee that recommended the city create an independent police monitor and civilian police oversight board, said he appreciated “the need to provide means of input for all residents,” but reiterated the committee’s position that, at some point, community members should be allowed to interview candidates themselves.

Commissioners are appointed by the mayor, with approval from the City Council, to five-year terms, and their chief hires do not require approval from city elected officials. The state law creating police and fire commissions dates back a century and was aimed at removing political influence from the management of police and fire departments.

The push by the normally tight-lipped commission to get public feedback comes after it and its attorney, Jenna Rousseau, received some 200 emails last month as part of a coordinated effort demanding greater transparency in the chief-hiring process and rejecting Rousseau’s suggestions that the independent monitor and oversight board could conflict with the PFC’s work.

In several emails with similar wording sent June 24, residents called on the commission to make the chief-selection process “open and transparent” and “guided by the communities most impacted by the police,” while accusing it of working on behalf of the police union.

“Simply put, the Monitor and Oversight Board envisioned by our Ad Hoc Committee will help the PFC perform its duties more effectively, equitably and comprehensively; they will not displace the PFC in any way,” Keith Findley, a UW-Madison law professor and chairman of the citizen committee that recommended the creation of the monitor and board, wrote in a June 15 letter.

In her response to the correspondence, Rousseau on June 25 wrote that it remained unclear how the board and PFC would resolve differences over police hiring, discipline and other matters.

“What if the Oversight Board finds that discipline should be imposed for a violation of policy, but the PFC determines after a just-cause hearing that the standards for imposing discipline were not satisfied?” she wrote. “While these are only hypothetical examples of situations that could arise, it illustrates how a discussion early on in the process would be beneficial for all involved.”

She also said the police union had nothing to do with her concerns.

Creating the monitor position was one of 146 recommendations contained in a $372,000 consultant’s review of the Madison Police Department completed in December 2017. While the consultant found areas police could improve, it also declared the department “far from ‘a Department in crisis.’” Madison police were an early adopter of the community policing model and over the years have been recognized for their work in problem-oriented policing and with the mentally ill, and for increasing the number of female officers.

Calls for changes to police reached a boiling point in March 2015 after Officer Matt Kenny fatally shot an unarmed but intoxicated Black man, Tony Robinson, 19, who Kenney said had attacked him in a dark stairway. Kenny was cleared of any wrongdoing in the incident, but the city’s insurer later agreed to a $3.35 million civil settlement with Robinson’s family.

Madison’s most recent police chief, Mike Koval, quit with one day’s notice on Sept. 29 after clashing for years with police critics and some City Council members and complaining that his department was underfunded. One of his assistant chiefs, Vic Wahl, has served as acting chief since Koval left.

The PFC in March canceled four public listening sessions scheduled for that month and April due to the COVID-19 coronavirus pandemic. The group has retained Police Executive Research Forum, or PERF, for $30,499 to help identify candidates.

Organizations wishing to provide input should complete the survey at madison.shortcm.li/6CGfCD. Time slots will be assigned on a first-come, first-serve basis.

Individuals looking to speak should contact PFC attorney Jenna Rousseau at 844-833-0828 or jrousseau@strangpatteson.com.

In the wake of the death of George Floyd and a controversial 2015 fatal police shooting in Madison, Madison police have been under the microscope.

But more diverse departments are not significantly less likely to use force with suspects.

New Madison police chief won't have to be city resident

The decision follows a change to state law and a 2016 state Supreme Court ruling.

Vic Wahl, right, has served as acting police chief since Sept. 30. He is seen here with Madison Mayor Satya Rhodes-Conway after a night of vandalism and looting in May.

Madison police and Wisconsin State Patrol officers stand off with protesters at the top of State Street May 30. Two police oversight measures being considered by the city may conflict with some powers of the Madison Police and Fire Commission, the commission's attorney says.