Marking a first for Wisconsin, a group of state prisoners graduated Tuesday with bachelor’s degrees — the first class of students to earn a four-year degree while incarcerated.

“This is truly an historic day,” DOC Secretary Kevin Carr said in an interview after the ceremony. “This is the very first baccalaureate program graduation in the history of the Wisconsin Department of Corrections.”

Twenty men incarcerated at Waupun Correctional Institution received their diplomas in biblical studies from Trinity International University during a ceremony at the prison’s visitor center, about an hour northeast of Madison. They also earned minors in psychology.

Fifteen of the graduates were classified as minimum or medium security, meaning they could have been incarcerated at a more relaxed facility with inmates who committed less serious crimes. But they transferred to Waupun, a maximum-security prison, for the educational opportunity. All 20 graduated with honors.

Around 250 friends, family and state officials watched and cheered as the men walked across the stage and shook hands with leaders from the university.

Trinity International University President Nicholas Perrin said attendees were there to celebrate the men, their accomplishments and the “step toward freedom” they made by bettering themselves.

“All of our choices have led to this point, this day, this moment where we stand before you, no better than any man, but better men,” graduate August White, 34, said to a room of applause and cheers. “Let us ... be a signal that those considered some of the worst of society can transform into some of the better of society.”

Trinity International University, an evangelical Christian school with campuses in Florida and Illinois, established Waupun Correctional Institution as an accredited branch campus in 2017. Roughly 55 inmates are currently enrolled in the program and working toward graduation.

The university provides the curriculum and the staff needed to run the classes, and inmates can enroll in the program for free if they make it through the application process. A private foundation, the Wisconsin Inmate Education Association, pays for 100% of the tuition needed to fund the program, which currently only offers the biblical studies major.

“This program was at no cost to the taxpayers,” Carr noted.

‘They played with our lives’: How one Wisconsin prison failed to contain a COVID-19 outbreak

Craig Long, associate dean of the extension site, said he teaches seven to eight classes a year to students who are “highly motivated” and “ask great questions.” He said the program fits well with Trinity’s goal of bettering individuals and communities.

“It’s consistent with our mission and beliefs to see people move past their mistakes into some kind of redemption,” Long said.

White said he and the others in the program developed a sense of camaraderie throughout their four years of classes. He said they have done “some terrible stuff,” but “have developed and grown into men.”

“We’re not irredeemable,” he said.

Mike Murphy, co-president of the board of directors for the Wisconsin Inmate Education Association, said now that White and the 19 other graduates have “gone first,” they “have opened the door for others.”

Carr said the corrections department doesn’t have any other four-year programs up and running right now, but is working on partnerships with the University of Wisconsin System, Marquette University, the Milwaukee School of Engineering and other universities to develop more, including some that would provide degrees beyond biblical studies.

The department currently offers some two-year associate degree programs with technical colleges, as well as individual courses through a partnership with the Milwaukee Area Technical College and UW-Madison’s Odyssey Beyond Bars.

“We are heavily invested in educational opportunities as a way for the persons in our care to engage in some significant transformational change,” Carr said.

Carr said having a degree will “level the playing field” for graduates and help them get good jobs when they are released back into the community.

At least 95% of state prisoners will be released back out into the community at some point, according to the Bureau of Justice Statistics. But ex-offenders face barriers to getting an education and employment.

More than half of formerly incarcerated individuals have just a high school diploma or GED, and another quarter have no high school credential at all, according to a 2018 report from the Prison Policy Initiative. Just 4% have a college degree.

Meanwhile, the unemployment rate for ex-offenders is five times higher than that of the general public in the U.S., the Prison Policy Initiative reported. Studies show that higher levels of education among former inmates increase employment rates and reduce recidivism.

Long said every level of education has an “exponential effect” on lowering the recidivism rate.

Peter Moreno, director of Odyssey Beyond Bars, said men and women often end up back in prison because they aren’t prepared for success. Having an education helps give them that preparation, he said.

“Research has repeatedly shown that prison-based education programs disrupt the cycle of reincarceration and empower students to become more productive citizens and family members when they return to their communities,” Moreno said.

White said he and the men in his program are more than the crimes they committed several years ago, and earning a college degree helps show that.

“We are brothers, sons, uncles and fathers. We are people who are loved. We are people who seek forgiveness,” he continued. “We are resilient and unbreakable. ... And after today, we will be able to say we are college graduates.”

In photos, videos: See inside of the Dane County Jail

"All of our choices have led to this point, this day, this moment where we stand before you, no better than any man, but better men."

August White, 34, one of the graduates

No inmates in the entire Wisconsin prison system were infected with COVID-19 on Monday, marking the first time since April 2020 that the active case count was zero.

Friends and family of Wisconsin inmates have been prohibited from visiting them in person for more than a year due to the COVID-19 pandemic.

“Our mail is being shredded with no recourse for us to get the mistakes fixed,” one inmate at Fox Lake Correctional Institution said.

One graduate said his degree allows him and others "the means to take one of the lowest points in our lives and turn it into a positive."

'I built too many prisons': Tommy Thompson, UW System want more inmates to get degrees

Former Gov. Tommy Thompson says he's had a change of heart on criminal justice and is promoting the UW System's prison education project. 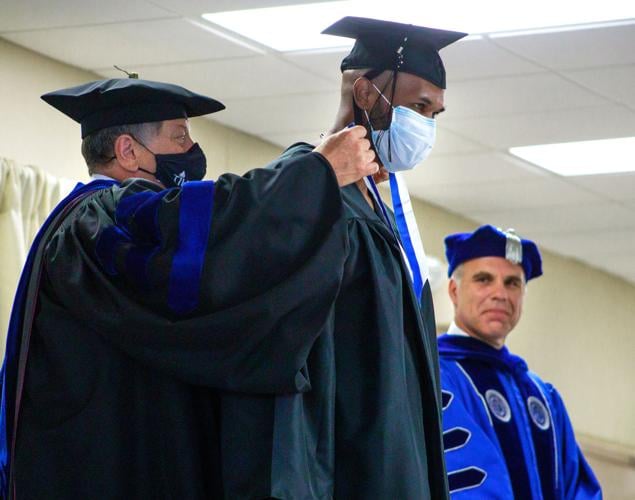 Kenneth McGowan receives a medal in recognition of earning his bachelor's degree in biblical studies while incarcerated at Waupun Correctional Institution. He was among 20 prisoners at the facility who graduated Tuesday — a first for the Wisconsin Department of Corrections. 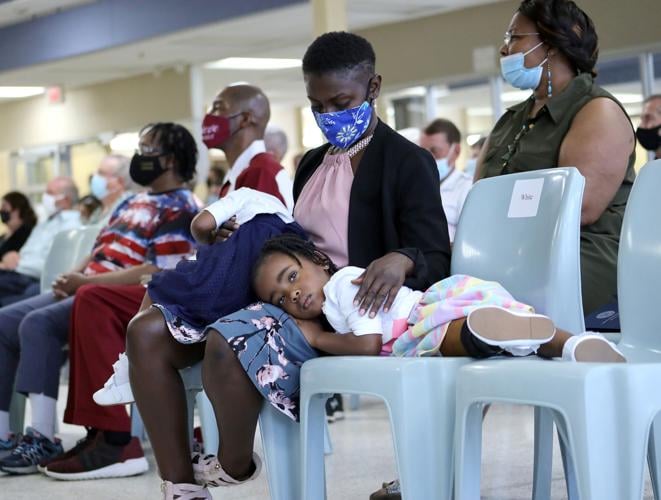 D'Asia White holds her two daughters, Amyra Porter, 4, right, and Kaliyah Porter, 2, while listening to the graduation ceremony. Her brother, August White, who is incarcerated at Waupun, graduated with a bachelor's degree. “We are not just criminals," he said while delivering the student commencement speech. 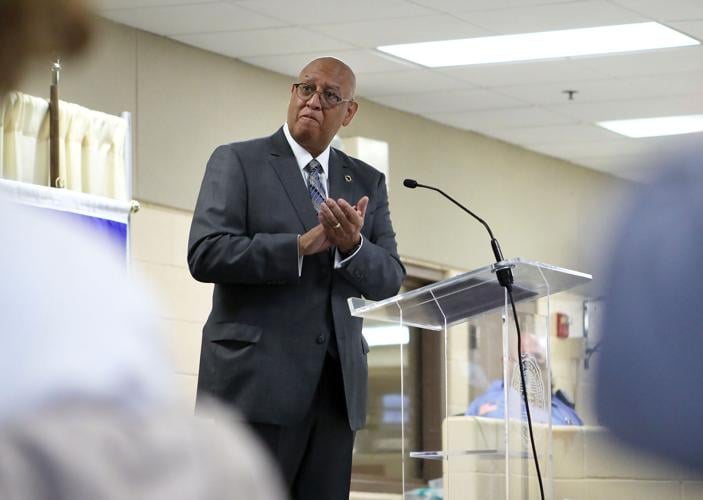 Wisconsin Department of Corrections Secretary Kevin Carr told graduates that the achievement of obtaining a four-year degree while incarcerated is "inspiring." 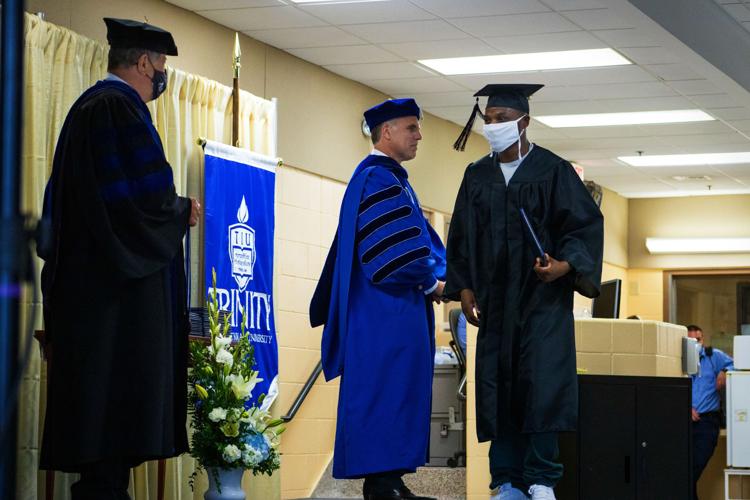 Marking a first for Wisconsin, 20 prisoners graduated with bachelor's degrees while incarcerated in a state prison Tuesday. The graduates got their diplomas during a ceremony at Waupun Correctional Institution. Here, James Lipscomb receives his degree. 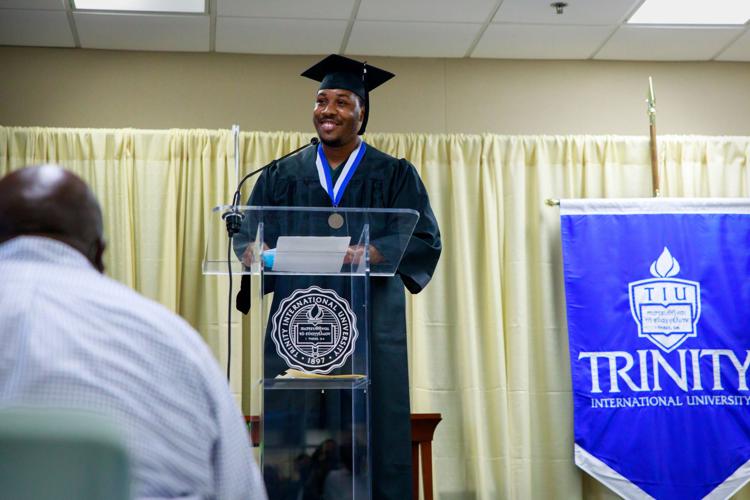 Graduate August White, 34, says earning his diploma shows that he and the 19 other graduates are "not irredeemable."