Madison’s decision to reserve positions on a new civilian police oversight board for members of certain races, with at least half going to Black people, is unconstitutional and should be overturned, a conservative Milwaukee-based law firm says in a lawsuit filed against the city in federal court on Wednesday.

“Racial quotas and classifications ... are unconstitutional, offensive and repugnant to basic American values,” the Wisconsin Institute for Law and Liberty said in a statement announcing the suit. “The city of Madison has not identified a compelling government interest that would justify racial quotas. The Constitution’s guarantee of equal protection requires governments — at all levels — to treat citizens as individuals, not members of a group or racial class.”

The city, through its attorney, Mike Haas, said WILL “cannot dispute that for decades communities of color have had more police contact and higher rates of incarceration than anyone else in our society” and referenced other instances in which government has been allowed to employ racial preferences, or affirmative action. 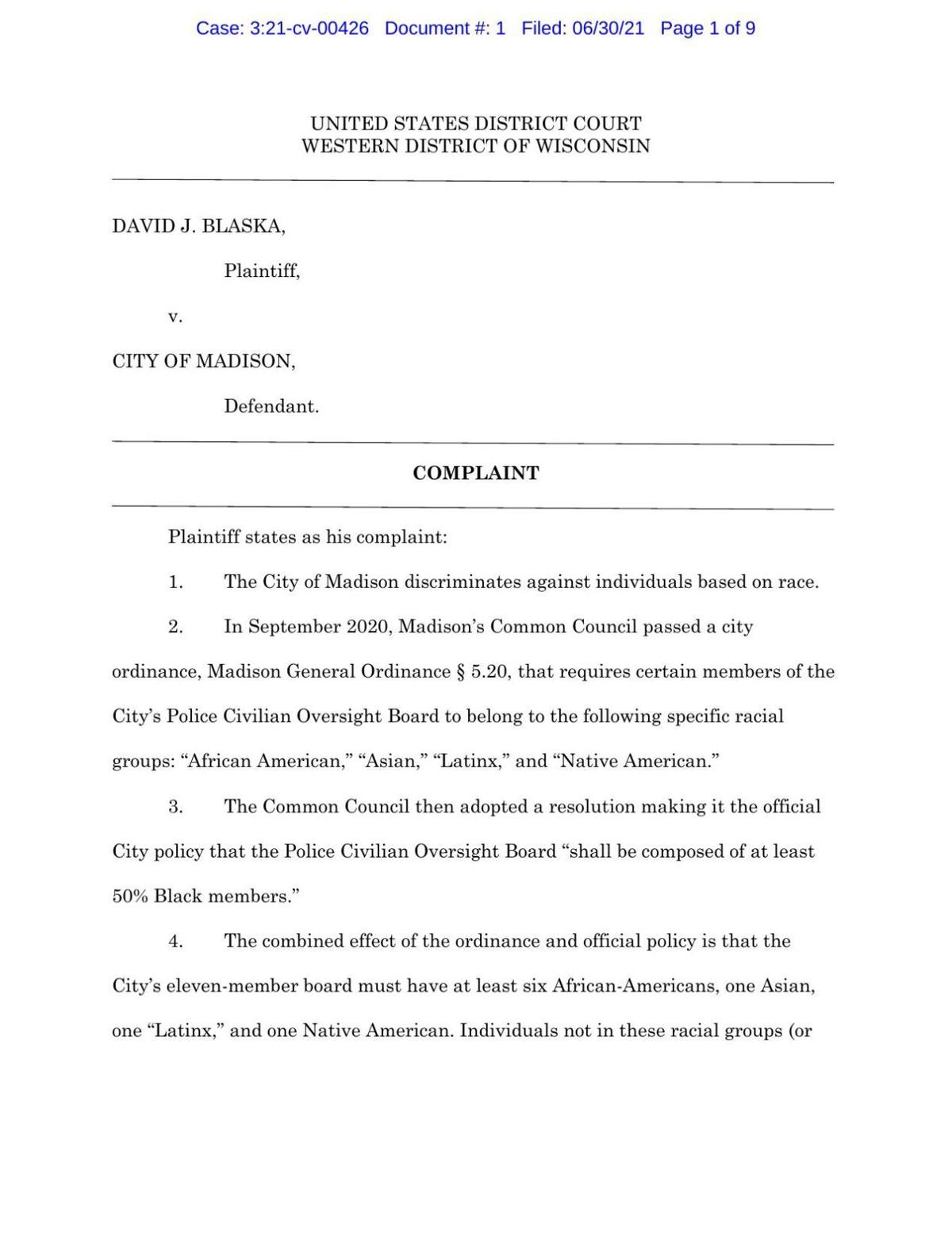 “This is not a case related to medical school admissions or preferential governmental contracting,” he said in a statement. “It’s about ensuring safe, fair and humane policing for everyone (in) our community — a compelling governmental interest if ever there was one.”

The City Council created the Civilian Oversight Board and an associated police auditor position in September. At least six seats on the 11-member board were reserved for Black people. The board is also required to have members from the Asian, Latino and Native American communities.

WILL’s plaintiff in the suit, local conservative blogger David Blaska, applied for a seat on the board and was rejected.

“Because he is white, plaintiff is ineligible for nine of the 11 board positions,” the suit says.

WILL filed a notice of claim with the city in January — effectively a warning that if the city did not change the requirements for the board, it would sue. The city did not respond within the required 120 days, according to WILL attorney Dan Lennington.

Provisions encouraging racial and ethnic diversity in college admissions or government contracting — but not specific racial quotas — are common and generally considered constitutional, meaning that the city could choose to remove the quotas and then reappoint the same people if the current requirement is found unconstitutional.

“We would welcome the city’s amendment of its ordinances to remove the unconstitutional quotas,” Lennington said. “But the court would still need to address the remedy, such as damages, attorney fees and equitable relief.”

Noting the city hasn’t been formally served with the suit yet, Haas said, “we haven’t discussed it internally or mapped out options for the city or discussed alternative approaches with the council or mayor.”

Culmination of years of work

Creation of the board and auditor position were the culmination of years of work by activists to increase oversight of police in the wake of a string of fatal police shootings, as well as an independent consultant’s report that made 146 recommendations — including that the city should hire an independent auditor — but deemed the department “far from ‘a department in crisis,’” whose use of force was “limited in volume and primarily minor in nature.”

The board has been meeting since November. The auditor has not been hired yet. Neither has the power to hire, fire or discipline police — tasks reserved under state law for the city’s Police and Fire Commission — but the new oversight entities can conduct independent investigations of Madison police, make referrals to the PFC, prepare an annual report on the city’s police chief and conduct community outreach on police matters.

As part of approving the ordinance, the City Council adopted a council subcommittee report calling for at least half of the board’s members to be Black.

Haas noted in August that case law prohibiting racial quotas relates to “educational and employment opportunities” and as such, “we cannot conclude for certain that a court would extend similar analysis to such requirements for a Civilian Oversight Board.”

“The purpose of ensuring a diverse police oversight board” is “to enhance overall public safety by ensuring that the board includes representation from historically disadvantaged communities and those who have experienced interactions with (the Madison Police Department),” he wrote at the time. “Also, similar provisions are included in ordinances of other communities.”

WILL has noted that the Madison ordinance states: “It is the official policy of the city of Madison to provide equal employment and promotional opportunities and equal access to public services for all persons from all segments of the Madison community without regard to their race, religion, color, age, marital status, disability, sex, national origin, sexual orientation or gender identity, hereinafter referred to as affected or under-represented groups.”

Editor's note: This story has been updated to correct an attribution: Lennington said that Madison did not respond to WILL's notice of claim within 120 days.

The Wisconsin State Journal editorial board just got bigger, better and more diverse. For the first time in our news organization’s more than 180-year history, three community members are joining the board that shapes the State Journal’s opinions. Former state Supreme Court Justice Janine Geske, Downtown Madison dynamo Susan Schmitz, and former police lieutenant and longtime youth football coach Wayne Strong have generously agreed to contribute their time and expertise to our mission. Please join us in thanking them.

Geske, a former state Supreme Court justice, introduces herself as one of the Wisconsin State Journal's new community editorial board members

Strong, a former Madison police lieutenant and longtime youth football coach, introduces himself as one of the Wisconsin State Journal's new c…

Schmitz, the Downtown Madison dynamo whose great-grandfather opened a store on the Capitol Square in 1898, introduces herself as one of the Wi…

From the editor: State Journal editorial board will now include members from our community.

The lawsuit by the Wisconsin Institute for Law and Liberty, challenging Madison’s plan to reserve half the seats on the new civilian police ov…

Who are they? WI children reported missing as of July 2

A young man flagged down a driver for a ride on the Far West Side, pulled a knife, grabbed the steering wheel and caused a crash on Wednesday night, Madison police reported.

Burnette said she put in a "significant number of hours ... that I put in behind the scenes to get this board lifted off the ground."