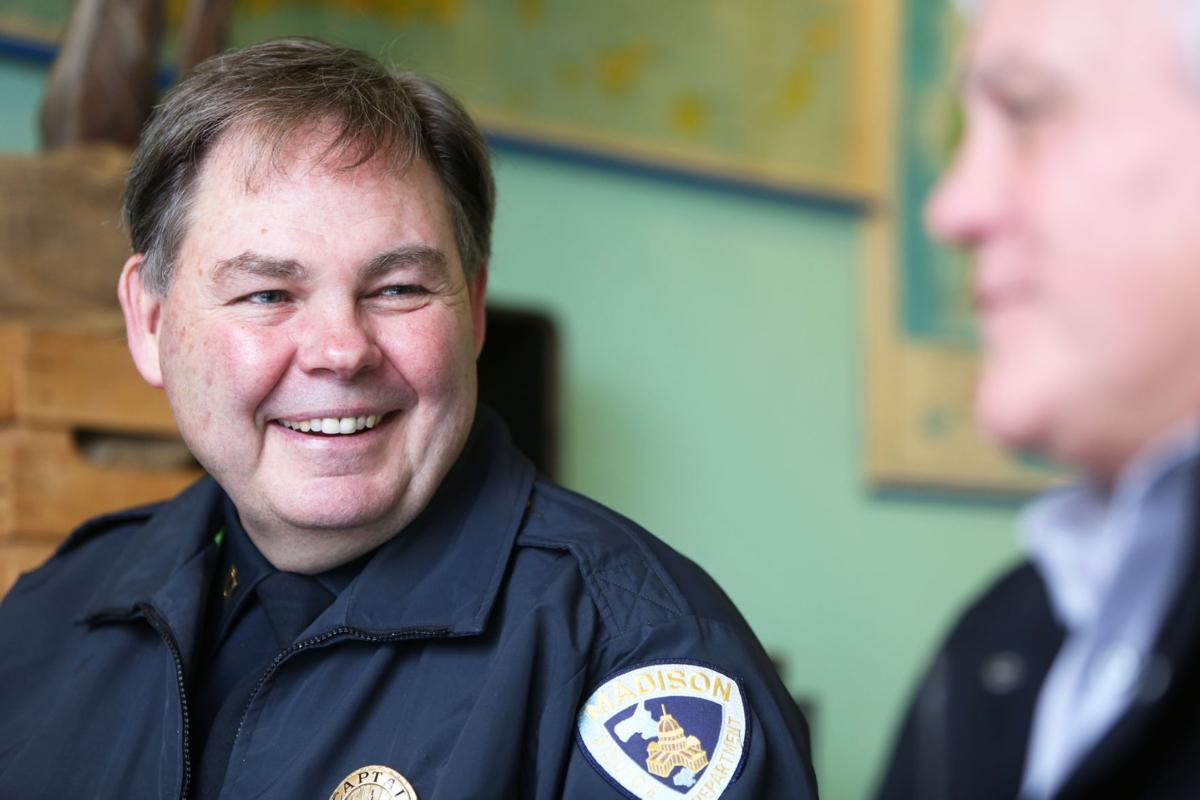 Madison Police South District Capt. Joe Balles meets with friends and fellow officers at Cargo Coffee on Park Street during his last week of work in mid-December. Seen as a South Side policing icon, Balles officially retires from the department on Jan. 22. 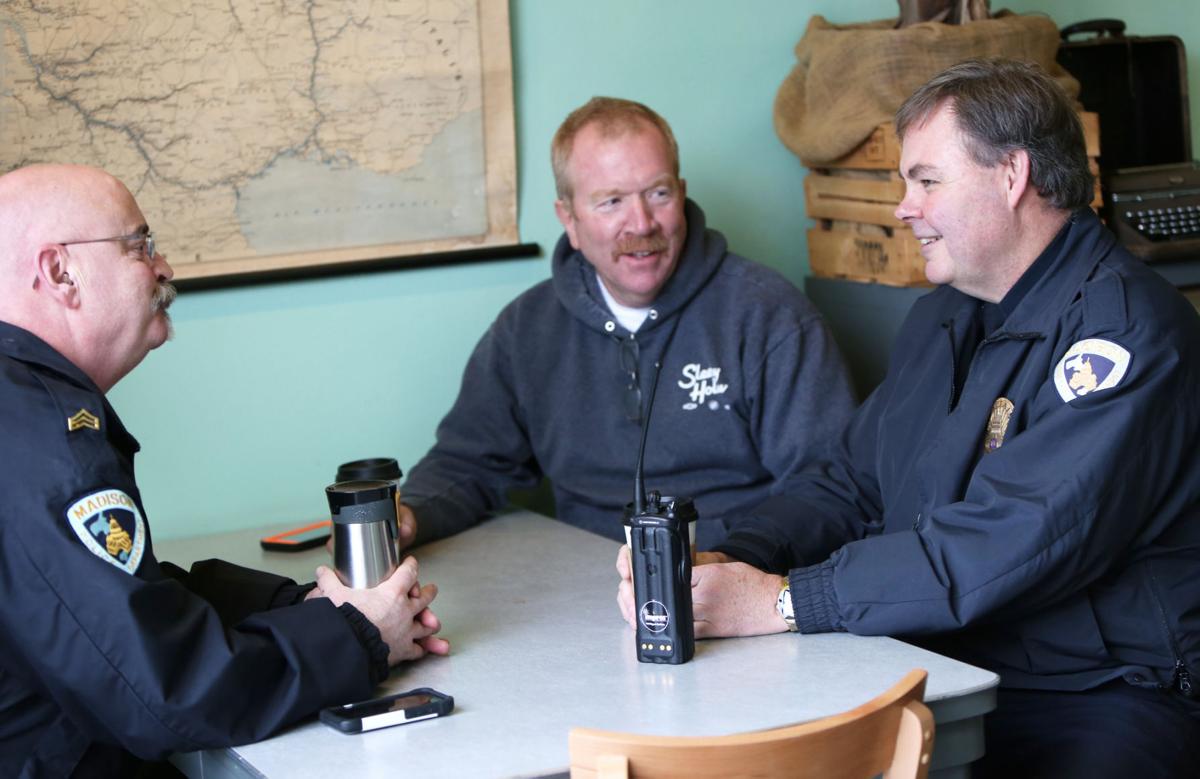 Madison Police Capt. Joe Balles, right, has coffee with Sgt. Eric Tripke, left, and developer Tom Munz, a friend, at Cargo Coffee in Madison. The retiring Balles earned a criminal justice degree from UW-Platteville and then started as an intern with the Madison Police Department in 1982. 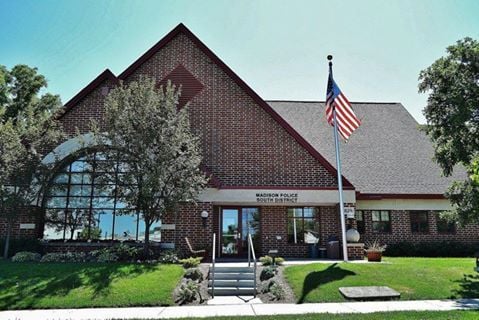 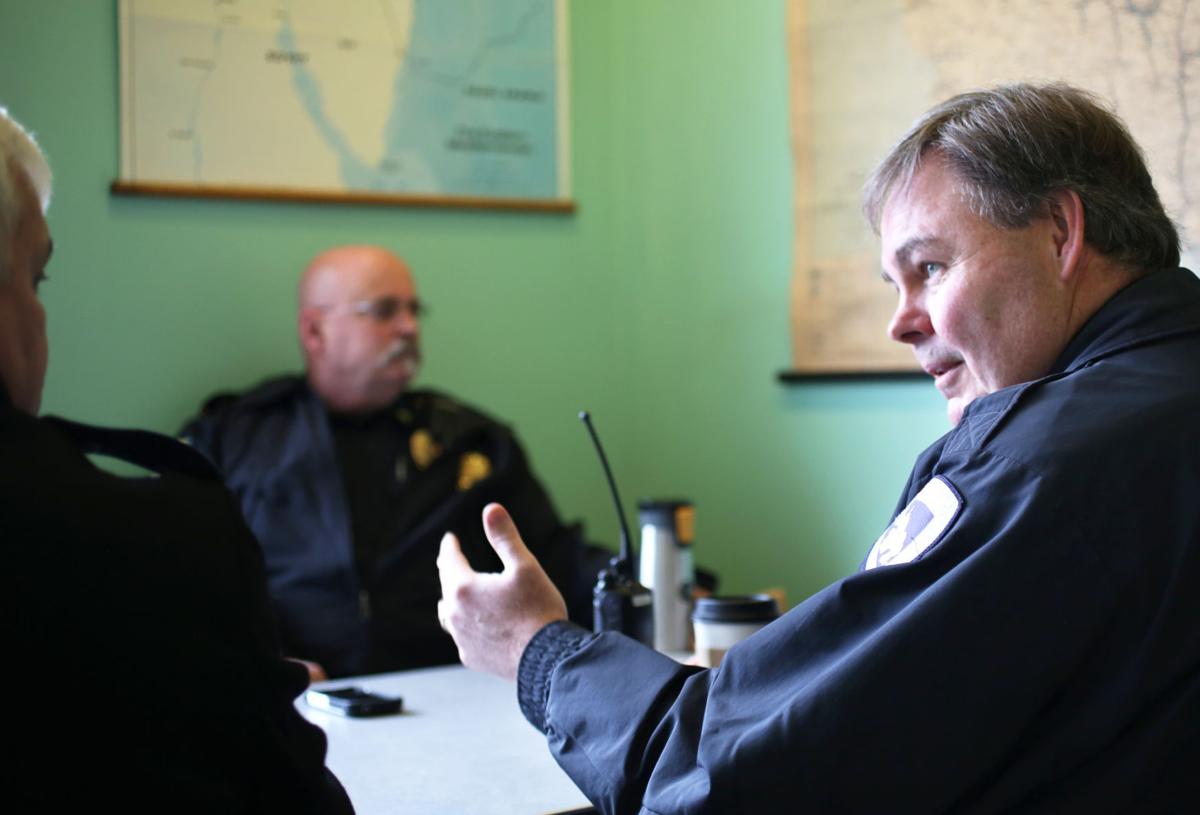 Madison Police Capt. Joe Balles, right, meets with friends and fellow officers, including Detective David Bongiovani, left, and Sgt. Eric Tripke at Cargo Coffee in Madison. Balles credits his South District officers, many of whom have used their seniority to stay in the district for several years, for building productive community relationships to get things done on the South Side.

That’s how Capt. Joe Balles said he prefers to think about his retirement this month — as a strategic shift, not an end — after 32½ years with Madison police, including the last seven years leading the department’s vibrant, diverse and often challenging South District through a period of high-profile redevelopment that continues today.

“It was kind of a surprise (to myself) that I’m actually doing it,” Balles said in a recent interview at a South Side coffee shop, where he was an animated jumble of forward-looking energy, excitement and nerves during his last active week of work. He officially retires Jan. 22.

Balles, 54, will start a nonprofit foundation to fund small neighborhood policing projects in Madison, while he consults nationally to help police departments make progressive improvements called for in the President’s Task Force on 21st Century Policing.

John Patterson, a former lieutenant, is replacing Balles as captain of the South District, where Balles, at 28, was one of the city’s first six neighborhood officers and sunk deep roots that today have made him an icon of South Side policing.

“He is very committed to the concept of community policing, where you would really become part of the community,” said longtime South Side resident and advocate Percy Brown, who first met Balles in his days walking the beat in the city’s drug- and violence-plagued former Broadway-Simpson neighborhood starting in 1989.

“He had great vision and great passion for the neighborhood,” Brown recalled. “We were working with a lot of very serious drug problems, and he really did connect very well with the people in the neighborhood, and a lot of them were people of color, people from all the trenches. (He) really came across as very people-oriented and in tune with the needs of the community.”

Brown, as deputy director of the city’s Community Development Authority, worked with Balles and others on a $14 million plan to revitalize the troubled neighborhood, now known as Bridge-Lakepoint, and later on similar issues in other South Side areas including the Burr Oaks neighborhood after Balles returned to lead the South District as captain in January 2009.

“He was always well respected as someone who really did embrace enforcement of the law,” Brown recalled. “But he had that certain touch, where he could make that human connection with people, too. It was more of a rare gift or art that you don’t see every day, especially in an officer.”

Madison Police Chief Mike Koval, who was in the same police recruit class as Balles in 1983, also speaks warmly of his longtime peer, who was a semifinalist for chief in April 2014.

“From the time he began his career, Balles had a gleam in his eye and a passion in his heart for all things community policing,” Koval said, citing his “zeal for engagement, fostering relationships, networking and problem solving.”

“He established himself as a fixture in South Side neighborhoods,” Koval added. Balles “knows everybody in his district, and his reach extends throughout the city.”

Balles ended his four-year tour as a South Side neighborhood officer in 1993, when he was promoted and moved Downtown through 2008. There he worked as a sergeant and then a lieutenant supervising technology and other support projects, and finally patrol duties for the Central District. There, he handled logistics for the city’s first Freakfest on State Street and kicked off the Downtown Safety Initiative, which staffs extra officers on weekend nights to help control alcohol-related mayhem.

“He coaxed, prodded and sometimes even threatened to bring (the Madison Police Department) into the next era of data-driven, ‘smarter’ policing,” Koval said.

But throughout his career, Balles also maintained and deepened his South Side relationships. He’s been a member of the Madison South Rotary Club for 22 years, he helped coach South Side youth basketball for 10 years, and he’s still an active member of the founding board of the Simpson Street Free Press, a volunteer commitment that dates to 1989.

And he still gets invited to an annual picnic organized by former Simpson Street mothers known as the Simpson Street Family Reunion. A native of Freeport, Illinois, Balles said he felt a bond with the mothers of Simpson Street as he walked the beat decades ago in that neighborhood.

“I grew up in a single-parent family — six kids, and my dad died when I was 10,” Balles said. “When I looked around all those families down there (on Simpson Street), I saw a lot of single moms raising kids, just like my mom did. So there was kind of a connection I always kind of had to those mothers from Simpson Street.”

Citing economic and community renewal including Madison Area Technical College’s proposal to move its Downtown campus to the South Side and a $5.2 million plan to transform a shuttered Beltline motel into a new hotel, Balles said he is relieved and proud to see the South Side “definitely turn the corner.”

The problems in policing that remain citywide, including gang activity, gunfire and a “no-snitching” mentality that frustrates investigators of certain crimes, aren’t new and have solutions based in building relationships with neighborhood residents, Balles said.

“We constantly have to be challenging ourselves and try to figure out how can we do things better,” he added. “Keeping this community safe, it’s something you have to roll up your sleeves and do every single day.”

About the South District

The South District encompasses areas south of the south shoreline of Lake Monona, and south of Regent Street and Speedway Road. Its eastern boundary is Monona Avenue and its west is Seminole Highway.

About 40,000 people from 17 neighborhoods live in the district's 13 sectors, in a total area covering about 9 square miles. It is one of the most diverse Madison police districts and has many low-income residents.

In his retirement, besides consulting and foundation work, Joe Balles said he plans to do some writing, sharing with police trade journals and other external groups the stories of some of the pioneering partnerships that he's seen work, and often helped create, over his police career in Madison.

Recent programs include a Community Restorative Court for low-level youth offenders that relies on cooperation between police and neighborhood leaders; a safety program at bus transfer points partnering police, schools, the mayor's office and Metro Transit staff; and an anti-domestic violence project with nonprofit Domestic Abuse Intervention Services. All three initiatives -- two of which now operate citywide -- started as pilot projects in his South District.

Balles was passionate about the restorative court program, which is designed to let first-time offenders ages 17 to 25 avoid jail time and the negative stamp of an early criminal record for certain misdemeanor offenses in favor of community service or restitution imposed by neighborhood residents. Police have made 15 referrals to the court since it started in June.

"There's truly young people (for whom) the traditional justice system isn't doing anything adequate to really address their underlying issues and changes that are needed in their behavior," Balles said. "They get apathetic, where getting arrested and sent to jail is just something they come to expect. That isn't a way of life anyone should expect. Something is missing."

Retired Madison Police Capt. Joe Balles had the idea of creating the nonprofit as a way to help build stronger ties between police and residents.

Shariff Syed hopes to be a catalyst for Madison's South Side with a new WoodSpring Suites hotel on the former Ann Street site of the Expo Inn.

Balles' interim contract with the school district ends Aug. 31. He may take the job on a permanent basis after that but details still need to be worked out.

Madison Police South District Capt. Joe Balles meets with friends and fellow officers at Cargo Coffee on Park Street during his last week of work in mid-December. Seen as a South Side policing icon, Balles officially retires from the department on Jan. 22.

Madison Police Capt. Joe Balles, right, has coffee with Sgt. Eric Tripke, left, and developer Tom Munz, a friend, at Cargo Coffee in Madison. The retiring Balles earned a criminal justice degree from UW-Platteville and then started as an intern with the Madison Police Department in 1982.

Madison Police Capt. Joe Balles, right, meets with friends and fellow officers, including Detective David Bongiovani, left, and Sgt. Eric Tripke at Cargo Coffee in Madison. Balles credits his South District officers, many of whom have used their seniority to stay in the district for several years, for building productive community relationships to get things done on the South Side. 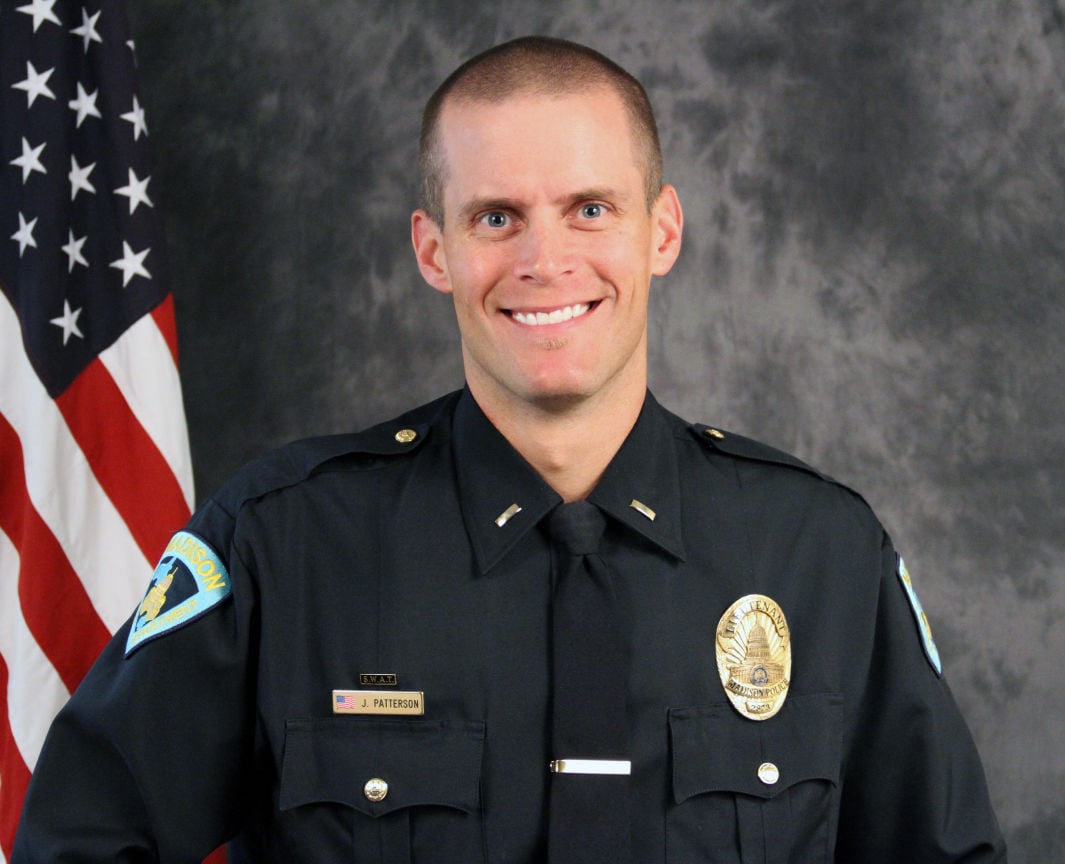 John Patterson, the new captain of the South District