In this Tuesday, Aug. 25, 2020, file photo, Kyle Rittenhouse carries a weapon as he walks along Sheridan Road in Kenosha during a night of unrest following the weekend police shooting of Jacob Blake. Rittenhouse is accused of killing two protesters days after Blake was shot by police in Kenosha. 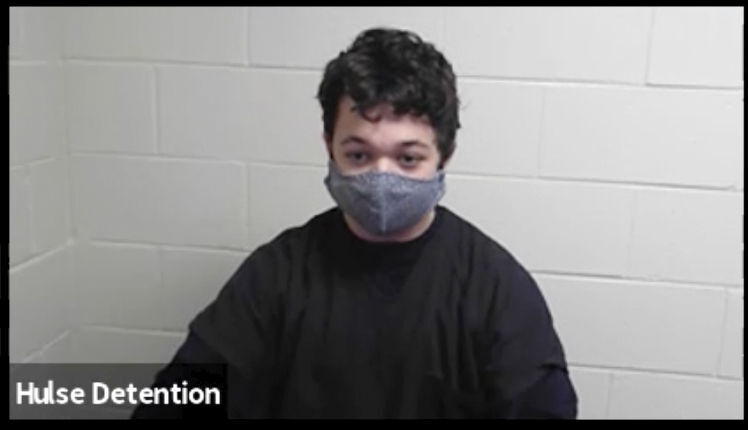 In this screen grab from live-stream video, Kyle Rittenhouse appears via video during a hearing at the Nineteenth Judicial Circuit Court in Waukegan, Ill., on Friday.

CHICAGO — A 17-year-old accused of killing two protesters days after Jacob Blake was shot by police in Kenosha remains in custody in his home state of Illinois as his attorneys fight efforts to send him to Wisconsin to stand trial on homicide charges.

Kyle Rittenhouse appeared on streaming video and wore a face mask during a brief court hearing Friday in Lake County, Illinois. Judge Paul Novak scheduled an Oct. 30 hearing on the extradition request, though prosecutors told Novak they were prepared to move faster.

“The law is pretty clear cut on this,” Lake County Assistant State’s Attorney Stephen Scheller said. “This case has been dragging on now, we’re already into October. ... We want a hearing as soon as possible.”

John Pierce, an attorney for Rittenhouse, said there was “no reason to rush” and questioned Wisconsin prosecutors’ motivation for pursuing the charges.

“This is a very unique, extraordinary situation,” Pierce said. “There is a massive amount of video evidence that shows beyond a shadow of a doubt this is not a legitimate criminal prosecution, it is a political prosecution.”

In court records filed late Thursday, Rittenhouse’s attorneys argued that he was acting in self-defense and extraditing him to Wisconsin would violate his constitutional rights. They also argued that Wisconsin prosecutors and Illinois authorities didn’t follow legal technicalities required for extradition. Angelina Gabriele, Kenosha County’s deputy district attorney, said Friday the county’s documents “are in compliance with all legal requirements and their other claims do not have any legal merit.”

Extradition is typically a straightforward process, and legal experts have expressed doubt that Rittenhouse’s attorneys could successfully prevent a court from sending him to Wisconsin to face charges there.

His arrest has become a rallying point for some conservatives, with a legal defense fund that has attracted millions in donations. But others see Rittenhouse as a domestic terrorist whose presence with a rifle incited the protesters.

The defense document echoes attorneys’ previous portrayal of Rittenhouse as a courageous patriot who was exercising his right to bear arms during unrest over the shooting of Blake, who is Black.

Extraditing Rittenhouse, his attorneys claim, “would be to turn him over to the mob.”

“The premature and unsupported charges are contributing to unwarranted public condemnation,” attorneys wrote. “Rittenhouse has been publicly branded a ‘mass murderer,’ a ‘terrorist,’ a ‘racist,’ and more.”

Rittenhouse surrendered to police in his hometown of Antioch, Illinois, a day after prosecutors say he shot and killed two protesters and injured a third during unrest on the streets of Kenosha on Aug. 25 over Blake’s shooting.

Like Rittenhouse, the two men killed and the third man wounded were or are white. If convicted of first-degree homicide, Rittenhouse would be sentenced to life in prison.

Legal experts had questioned what basis Rittenhouse’s attorneys could use to fight his extradition, which is usually an uncontested step. Mike Nerheim, the Lake County state’s attorney, has said that Illinois Gov. J.B. Pritzker signed a warrant to return Rittenhouse to Wisconsin after a request from Wisconsin Gov. Tony Evers, a fellow Democrat.

The killings happened amid protests on Kenosha’s streets two days after a white police officer shot Blake seven times in the back, leaving him paralyzed from the waist down and sparking outrage after video of the shooting was posted online. A Wisconsin Department of Justice investigation into that shooting is ongoing. The three responding officers are on leave.

According to prosecutors and court documents, Rittenhouse shot and killed 36-year-old Joseph Rosenbaum, of Kenosha, after Rosenbaum threw a plastic bag at Rittenhouse, missing him, and tried to wrestle his rifle away.

While trying to get away in the immediate aftermath, Rittenhouse was captured on cellphone video saying, “I just killed somebody.” According to the complaint filed by prosecutors, someone in the crowd said, “Beat him up!” and another yelled, “Get him! Get that dude!”

Video shows that Rittenhouse tripped in the street. As he was on the ground, 26-year-old Anthony Huber, of Silver Lake, hit him with a skateboard and tried to take his rifle. Rittenhouse opened fire, killing Huber and wounding Gaige Grosskreutz, of West Allis, who was holding a handgun.

Rittenhouse’s extradition would not be an issue if he had been arrested in Kenosha the night of the shootings. Cellphone video that captured some of the action shows that right after the shootings, Rittenhouse walked slowly toward a police vehicle with his hands up, only to be waved through by police.

He returned to his Illinois home and turned himself in soon after. Police later blamed the chaotic conditions for why they didn’t arrest Rittenhouse at the scene.

West Side resident wakes up to find marijuana, realizes home has been burglarized, Madison police say

A West Side homeowner woke up Thursday morning to find a bag of marijuana on the kitchen floor, then realized the house had been burglarized while he and his wife slept, Madison police reported.

A man was hospitalized after being shot multiple times in a targeted shooting at a Stoughton bar early Saturday, police reported.

In this Tuesday, Aug. 25, 2020, file photo, Kyle Rittenhouse carries a weapon as he walks along Sheridan Road in Kenosha during a night of unrest following the weekend police shooting of Jacob Blake. Rittenhouse is accused of killing two protesters days after Blake was shot by police in Kenosha.

In this screen grab from live-stream video, Kyle Rittenhouse appears via video during a hearing at the Nineteenth Judicial Circuit Court in Waukegan, Ill., on Friday.