Protesters in Madison again took to the streets Monday as outrage over the police shooting of Jacob Blake in Kenosha Sunday roiled the nation.

Blake, 29, remained in serious condition Monday after Kenosha police shot him. A widely seen cellphone video made by an onlooker showed at least one Kenosha police officer shooting at Blake's back as he leaned into his SUV, which had his three children sitting in it. Seven shots can be heard in the video.

"You always have the feeling if it happens there, it can happen here," said Ald. Sheri Carter, the first African American woman elected Madison City Council president. "It puts a layer of stress and anxiety on the Black community, although it didn’t happen in our community."

As a Black woman, Rep. Shelia Stubbs, D-Madison, said watching the video of Blake getting shot was "traumatic."

"I am shook up. I cried," Stubbs said. "My heart goes out to Jacob Blake's family. There were children in that vehicle that could have been killed by a gunshot from law enforcement, whose job is to protect and serve."

Stubbs said one of the worst parts is that, after the police killings of George Floyd in Minneapolis and Breonna Taylor in Louisville, police violence against Black people is starting to "almost feel normal."

About 100 to 200 people gathered shortly after noon on the Capitol steps before marching down State Street.

Protesters made their way toward UW-Madison's campus chanting “Black Lives Matter” and “Jacob Blake." They briefly held up traffic on Johnson Street, where they shouted "all cops are bad cops" at a handful of police officers watching from the curb.

Demonstrators continued marching into the evening. As of 10:30 p.m., the protest remained peaceful. Earlier Monday, many State Street businesses boarded their businesses back up in anticipation of trouble after stores were damaged and looted during or after Black Lives Matter protests in May and June.

Some protesters directed their ire toward the reporters there to cover the event. At one point, organizers demanded reporters stand across the street from the demonstration and objected to anyone taking photos or videos.

Reina Werth, one of the protesters, said she was marching because systemic racism in the U.S. is showing "now more than ever."

"The video that came out of Kenosha is absolutely horrific," Werth said. "I don’t understand how people can watch it and not be here."

Protester Jae Buck, 21, said she was sexually harassed by a police officer while out of state about a month ago. Buck, who is white, said the experience gave her a taste of what she said it must be like to be afraid of police all the time.

"No one is out here protesting or being angry for no reason," Buck said.

Brandi Grayson — founder and CEO of Urban Triage, which organized many of the local protests against the death of Floyd — said her organization was not out leading protests Monday, but acting in a support role.

She said those who are more focused on the potential destruction that could follow the protests than being outraged about police brutality should consider that Black people have been "murdered without justice or due process."

"We’re in support of protesters. We are in support of however that manifests," Grayson said. "We don’t have the judgment of how the rage — the Black rage and Black pain and 400 years of oppression — what that looks like. We don't have a judgment on that."

Organizers from local activist group Link demanded UW-Madison leaders remove a statue of Abraham Lincoln and a boulder associated with racist symbolism, and called for “a moral restart” to the semester with no in-person instruction until the COVID-19 pandemic subsides.

Urban League President and CEO Ruben Anthony said this "atrocity is just unacceptable" and said there need to be more policies statewide that all policing organizations abide by, like mandatory body cameras and restrictions on use of excessive and deadly force. He said organizations are too often left to come up with their own policies and procedures, which makes policing inconsistent.

"How many times do we have to see people of color become victims of police to realize there is something broken within our policing organizations?" he said. "We expect police to protect us, not shoot us in the back."

Michael Johnson, president and CEO of the Boys & Girls Clubs of Dane County, said he was "traumatized" by Sunday's shooting and wants to see the country do better at valuing the lives of Black people.

Stubbs said the state Legislature needs to take the lead on enacting legislation to limit police use of force, combat racial profiling and require de-escalation training for officers, as well as other limits to use of force. On Monday, Gov. Tony Evers called on the Legislature to take up a package of nine police-reform bills in a special session.

Grayson said watching the video of Blake's shooting made her feel "numb" and was "one of those things I wish I never saw."

She called the incident an example of "patriarchal violence," in which men in power feel the need to show their dominance. When people refuse to follow police commands, she said, some officers assert their authority through violence.

The recent killing of Anisa Scott, an 11-year-old girl killed in a car-to-car shooting last week, was another example of that same mindset, Grayson said, suggesting the shooters were trying to assert their power.

Local activist group Freedom Inc. also tied the death of Anisa and the shooting of Blake to deep structural problems. In a statement, the group called for the dismantling of "a larger system of violence that evolved out of its neglect for Black and Brown communities."

Jacob Blake's father told the Chicago Sun-Times that his son now has “eight holes” in his body and is paralyzed from the waist down, though doctors don't know if the paralysis will be permanent.

Additional Wisconsin National Guard members will be deployed in the state to respond to protests — sparked by the police shooting of a Black Kenosha man on Sunday — that have turned violent over the last two nights.

Tuesday night’s destruction came just as shopkeepers and building owners had largely removed plywood that covered windows along State Street and its offshoots since protests earlier this summer over systemic racism and police brutality.

Some see the controversial flag as a symbol of solidarity with police, but the UW-Madison police chief has banned its use because of the flag's connection to white supremacy. 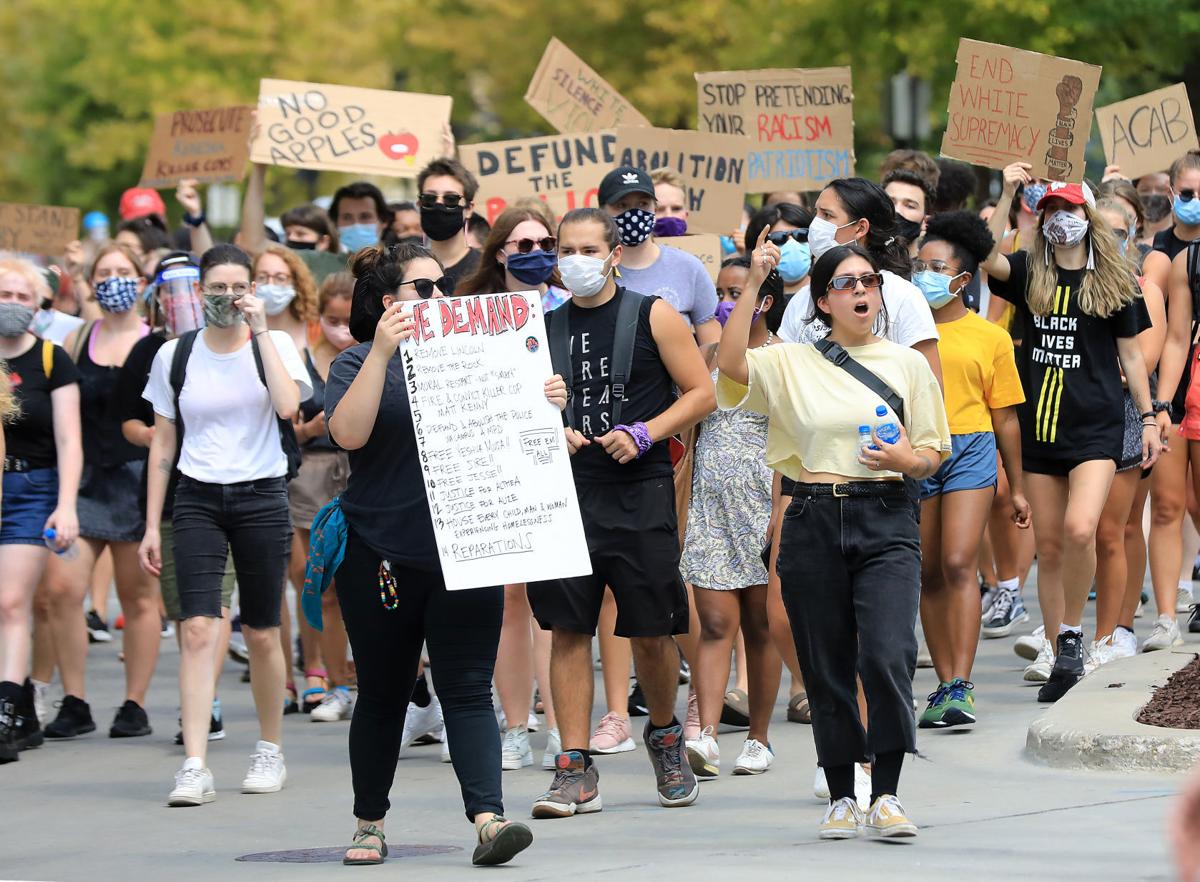 After the shooting of a Black man by police officers in Kenosha, protesters take to the streets Monday in Downtown Madison. 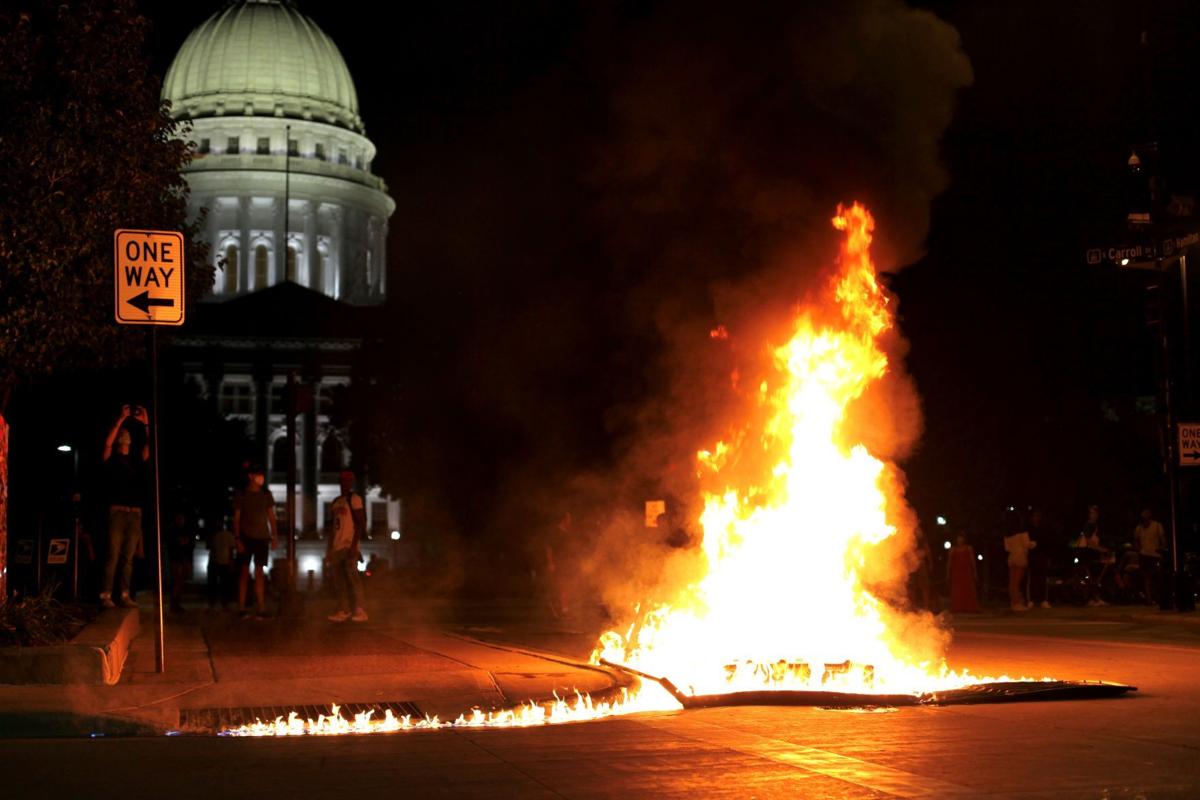 Flames from a burning dumpster spill out onto the street near the Capitol Monday night. Protesters set at least three dumpsters alight.