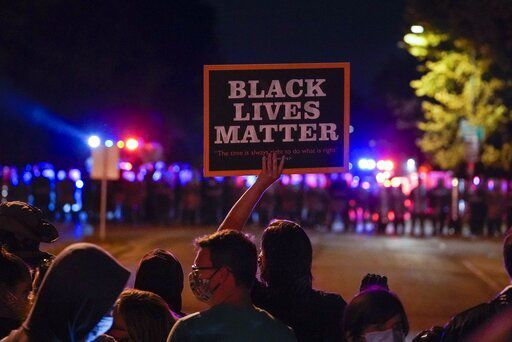 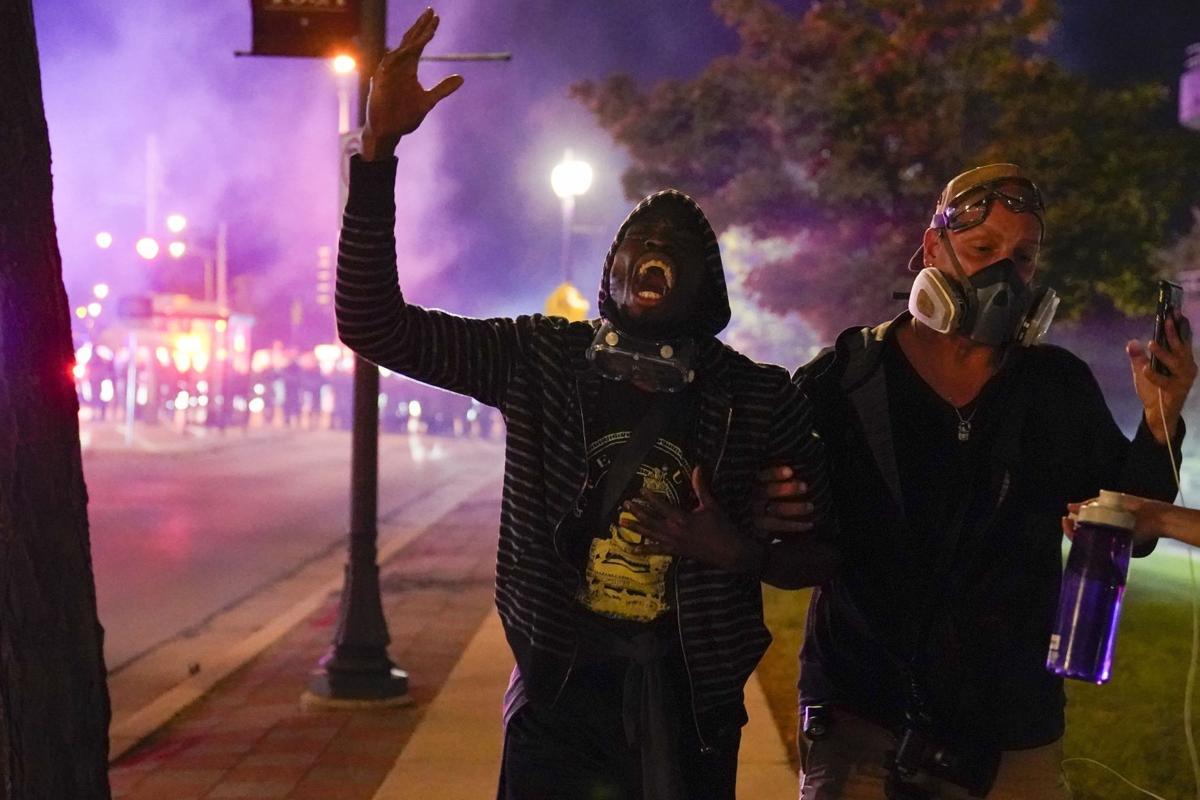 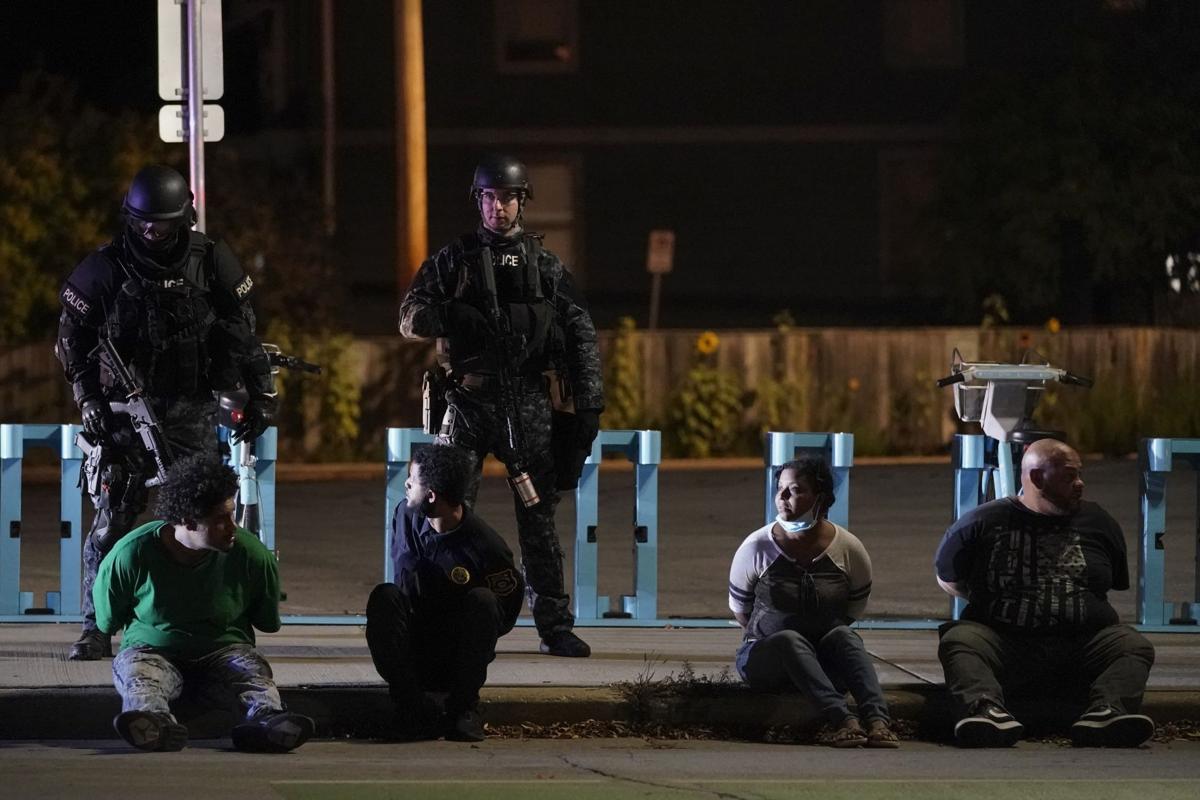 Police hold four people on the street Friday in Wauwatosa. 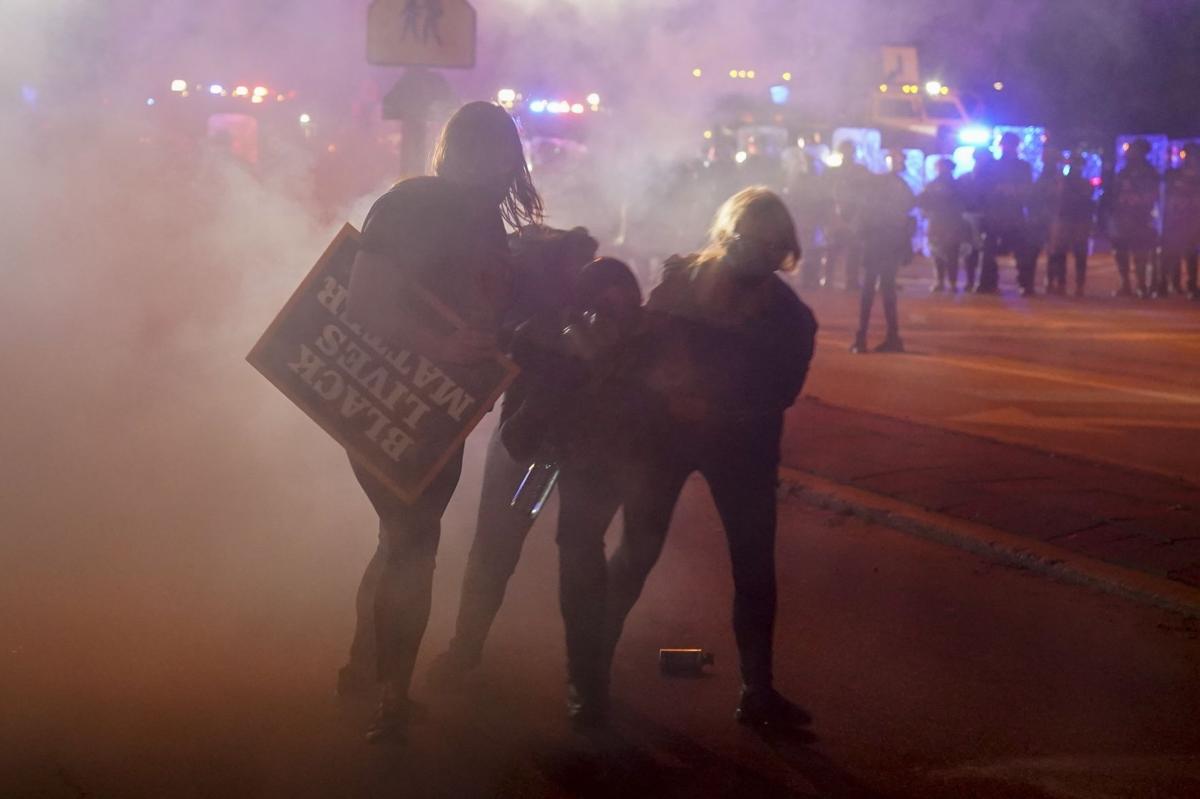 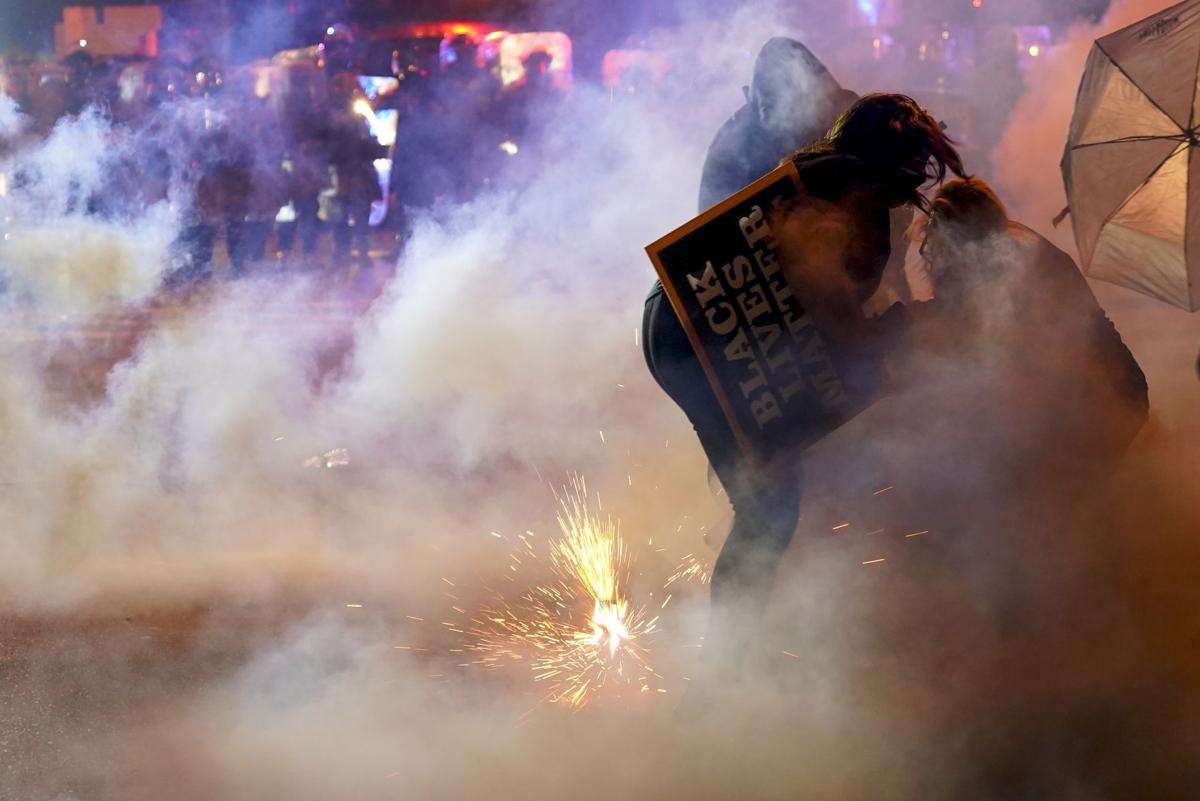 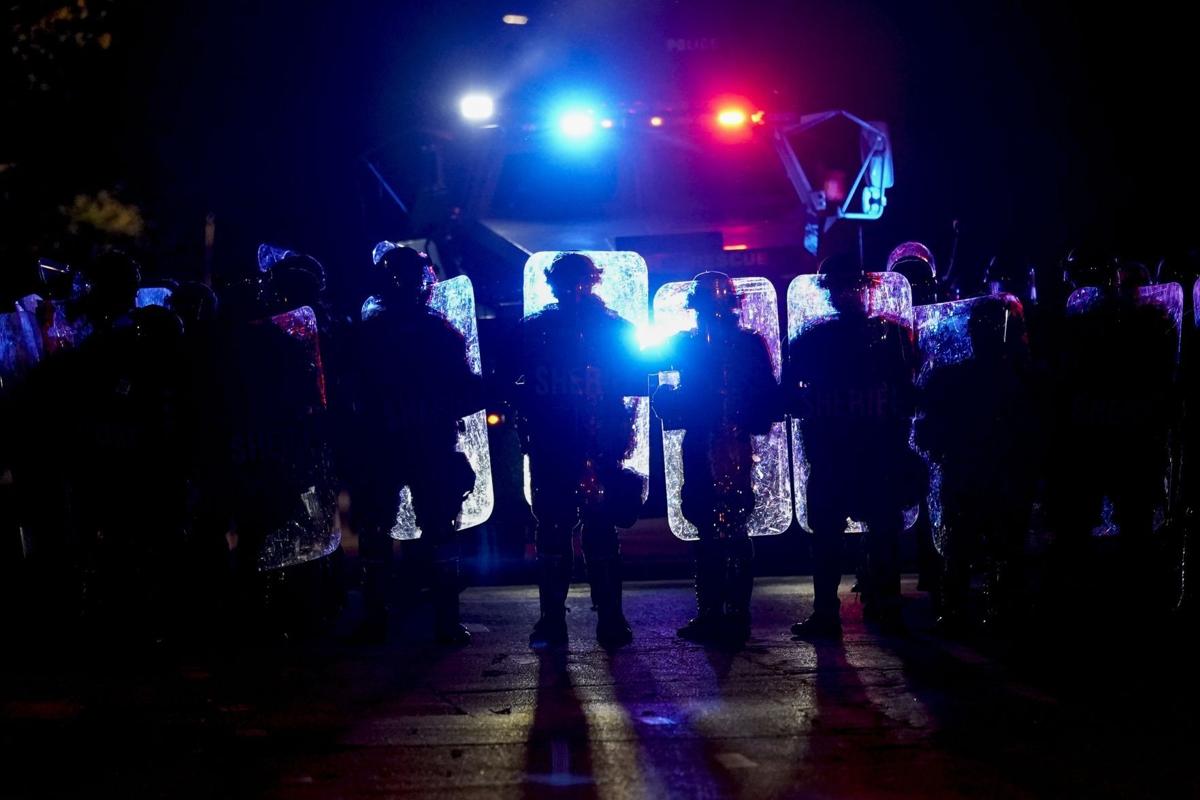 Police line up in riot gear Friday as protest continued for a third day in Wauwatosa.

WAUWATOSA — Police used tear gas on demonstrators and arrested 28 people during a third straight night of protests over the lack of charges against a suburban Milwaukee police officer who fatally shot a Black teen, authorities said, as they took to Twitter on Saturday to outline what they called an “escalation in force by the protesters.”

About 100 people gathered outside City Hall on Friday past Wauwatosa's 7 p.m. curfew and refused multiple orders to disperse, according to police. Police said they used tear gas on the crowd, after bottles were thrown at officers.

On Saturday, the Wauwatosa Police Department posted on Twitter that people have been asking valid questions about the police response over three nights of protests. Police posted a picture of bottles they said were found in a backpack, including a bottle of lighter fluid, noting that the materials can be used to start fires.

“Over the past three nights, we have seen an escalation in force by the protesters. Our law enforcement response is in reaction to this escalation,” police tweeted. They said that on Friday night, protestors had Molotov cocktails and other fire starting supplies and guns were spotted in the crowd.

Protesters have gathered every day since prosecutors announced Wednesday that they would not charge Officer Joseph Mensah in 17-year-old Alvin Cole’s death. Mensah, who is Black, shot Cole after a foot chase outside a Wauwatosa mall in February.

The police department’s tweets come as some have chastised authorities for the way they have handled the protests. During Thursday night’s demonstration, police arrested Alvin Cole’s mother, Tracy Cole, and his sisters. Family attorney Kimberly Motley criticized the way police treated the family, noting Tracy Cole had to be treated for injuries.

In a tweet addressing the police chief and mayor on Friday, Motley said "due to your failed leadership you have turned Wauwatosa into a war zone!'

About an hour after Friday’s curfew went into effect, law enforcement began advancing toward the crowd. Police said they used chemical irritants, which they described as tear gas, as well as pepper balls and paint balls after bottles and rocks were thrown at them. Video posted to Twitter by local reporters showed heavy smoke in the air as police advanced, and multiple people taken into custody.

Windows were broken at a Snap Fitness center, police said.

Police said two of Friday’s 28 arrests were for felonies, one was for a misdemeanor and 25 were for municipal citations. Police noted that some of the people arrested were blocking traffic, others had tried to start fires, and one person had materials to start a fire. Another person in the group posted a picture of himself with a handgun, authorities added, though it was not clear if he was among those arrested.

One of the arrestees was driving in one of three vehicles that had come to the Wauwatosa Police Department early Saturday. The vehicle almost hit an officer, according to police. The driver got into a second vehicle, and police arrested the person after a short chase, authorities said.

“We can appreciate the anger and frustration that exists among those closely affected by recent events,” police said in a statement Saturday. They asked people to continue to comply with the 7 p.m. curfew, which was to be in effect again on Saturday and Sunday nights. The National Guard is assisting local police.

The protests in Wauwatosa are just the latest in a series of demonstrations against police racism and brutality that have erupted across the country since George Floyd’s death. Floyd, who was Black, died in May after a white police officer in Minneapolis pressed his knee into his neck as Floyd gasped that he couldn’t breathe.

The co-founder and publisher of The Daily Caller said two of his reporters were beaten and detained by police in Wauwatosa on Thursday as they were videotaping Tracy Cole’s arrest. Numerous journalists have been injured or arrested while covering protests nationwide in recent months.

Neil Patel, who founded the conservative news outlet with Tucker Carlson, said in a statement that reporters Shelby Talcott and Richie McGinniss “were brutally beaten with clubs for no reason,” the Milwaukee Journal Sentinel reported.

A message seeking comment from the Wauwatosa Police Department was not immediately returned to The Associated Press.

Police on Friday defended the arrests of family members of a Black teen killed by a suburban Milwaukee officer, saying they were driving recklessly during a protest and refused officers' demands to leave their vehicles.

A Black Wisconsin police officer who fatally shot a Black teenager outside a suburban Milwaukee mall in February won’t be charged because he had reasonable belief that deadly force was necessary, a prosecutor said Wednesday.

About 100 people were marching through a residential neighborhood in Wauwatosa to call for the firing of Wauwatosa Police Officer Joseph Mensah.

An SUV was shot at after the driver gestured at a stolen vehicle traveling recklessly on the East Side on Sunday afternoon, Madison police reported.

A Verona man out on bail was arrested for the violent sexual assault of a female escort, Madison police reported.

The police chief of a Milwaukee suburb that has seen protests and unrest since an officer was cleared of criminal wrongdoing in the fatal shooting of a Black teenager in February said Monday that he sees no reason why the officer should be fired.

Lawyer: Wauwatosa cop who has killed 3 can’t be fired for fear of future shooting

An attorney for a Wisconsin police officer who has fatally shot three people since 2015 says his client shouldn’t be disciplined or fired simply because city officials are worried he might do it again.

Wauwatosa officer who has killed 3 since 2015 resigns

A Wauwatosa police officer who has fatally shot three people in the line of duty since 2015, including a teenager outside a mall in February, is expected to receive about $130,000 for resigning from the force.

Fifty people are suing the city of Wauwatosa over the way it handled protests last fall after authorities announced that a police officer would face no charges for the fatal shooting of a Black teenager.

Judge delays charging decision for Wisconsin officer who has killed 3

A judge has delayed his decision on whether to go around prosecutors and charge a Wisconsin police officer who killed a man sitting in a parked car, one of three people he has killed in his career.

Police hold four people on the street Friday in Wauwatosa.

Police line up in riot gear Friday as protest continued for a third day in Wauwatosa.