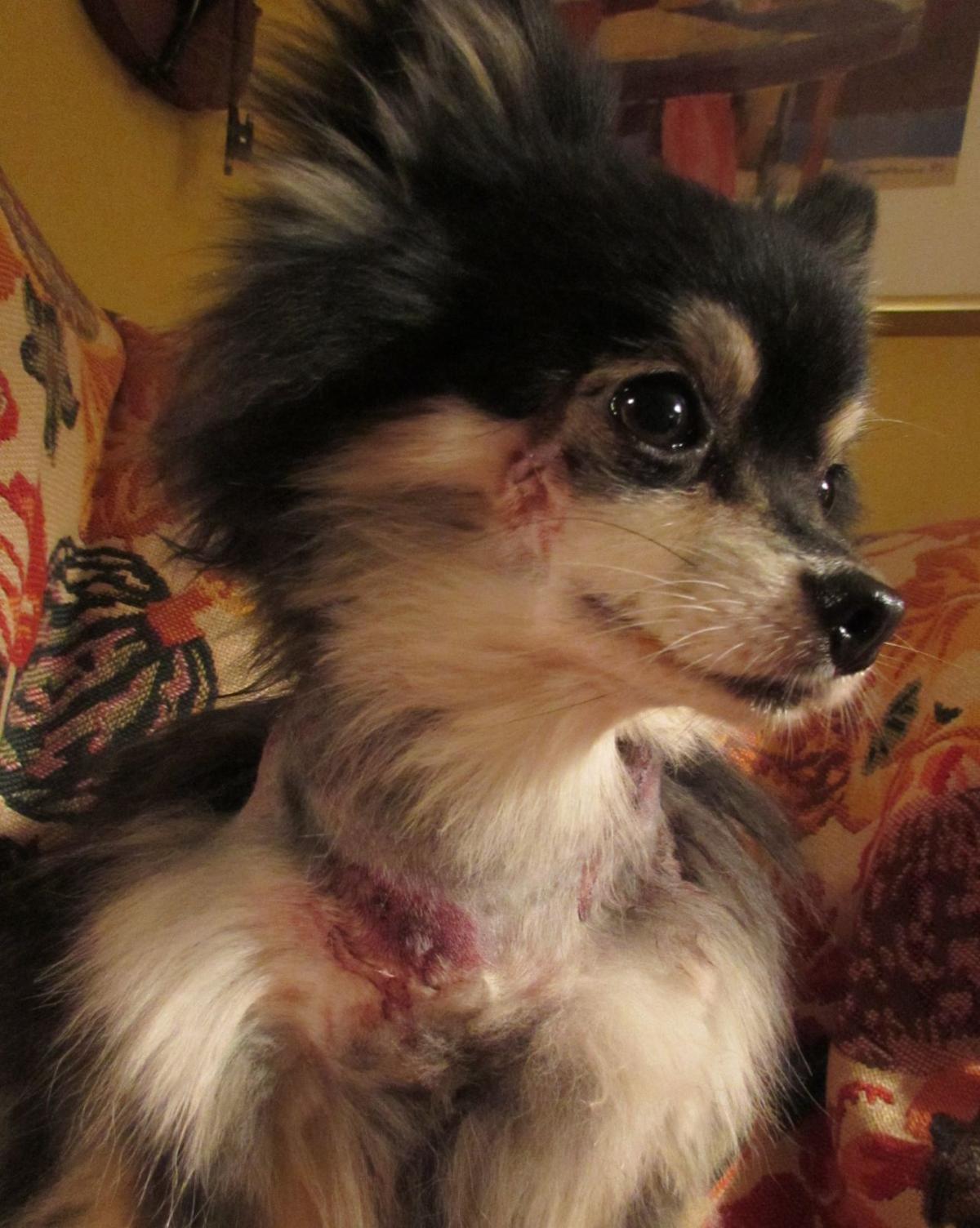 Cam French said she scared off a coyote that bit her Pomeranian, Charlie, in the backyard of her home on Buckeye Road on Madison’s East Side. 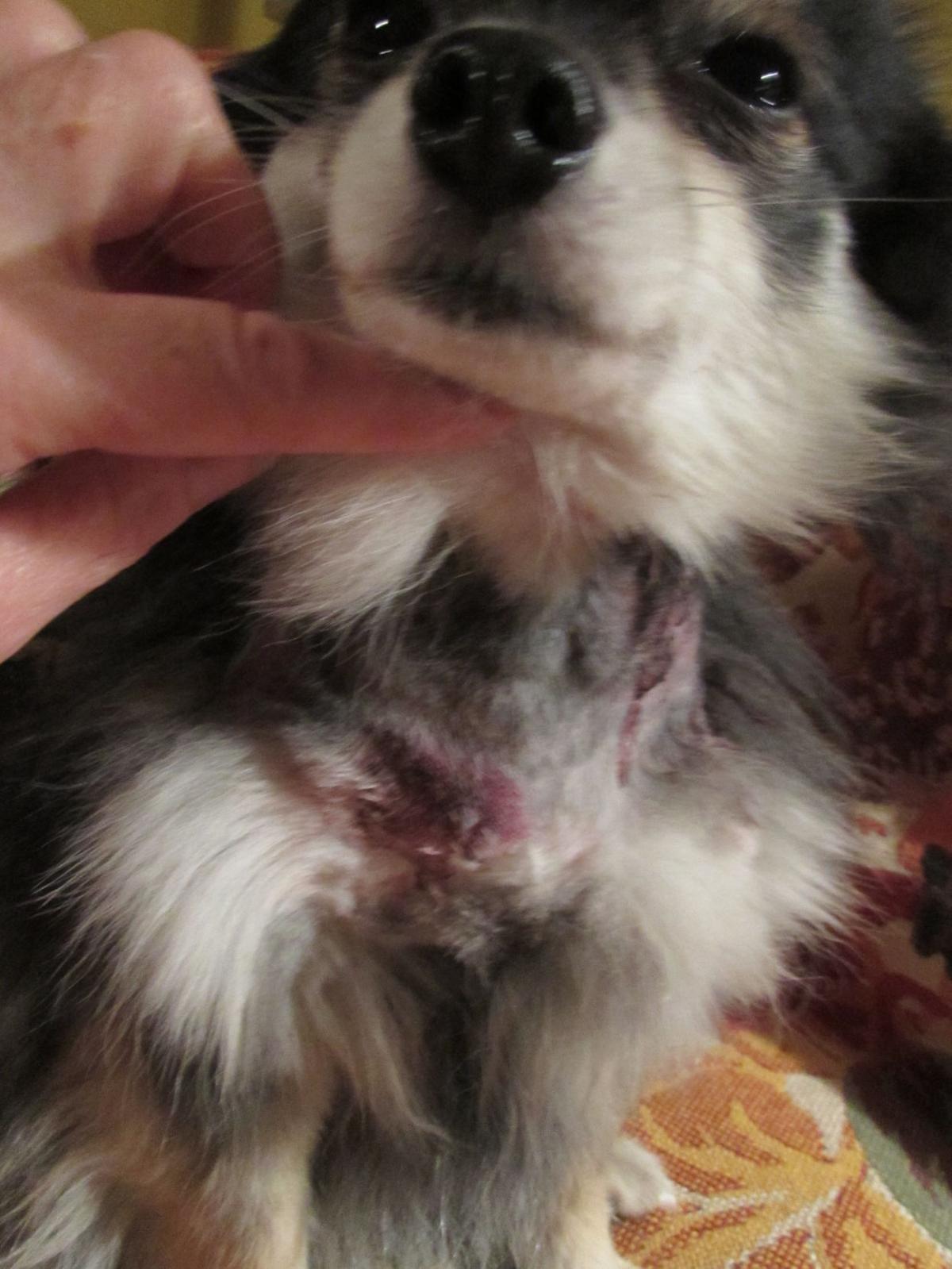 Cam French of Madison said her dog, Charlie, was treated by a veterinarian after a coyote snatched it last week.

A string of coyote attacks on small dogs in Madison has left East Side neighbors wary and divided about how best to keep their pets safe.

About four dogs have been reported killed by coyotes in at least a half-dozen attacks since mid-September with most of the incidents taking place within blocks of a 1-mile stretch of Buckeye Road west of Interstate 90-94, a public health official confirmed.

Officials haven’t been tracking attacks closely, but it appears the most recent fatality took place Oct. 12 when a Yorkshire terrier was snatched from its backyard on Ranch House Lane, said John Hausbeck, who supervises county animal control officers.

Another attack took place the next day about a mile away. The owner of a home on Buckeye Road said she scared off a coyote that emerged from shrubbery while she wasn’t looking and suddenly had her dog in its jaws just a few steps from where she stood at her back door.

“I took my eyes off him for 10 seconds,” Cam French said of her Pomeranian, Charlie. “I yelled and it released Charlie and bounded back past our shed.” A veterinarian used surgical staples to close Charlie’s wounds, French said. She said she began more closely supervising her pet in September after hearing about a nearby coyote attack.

Experts at a UW-Madison center that studies urban coyote behavior say trapping is an option for dealing with them if they begin to lose their fear of humans, but it’s difficult to pinpoint which member of a pack is causing trouble.

Urban coyotes are often killed in traffic, but others soon take their place.

“There are a lot of coyotes in the Madison area,” said David Drake, a researcher with the UW-Madison Urban Canid Project. “You’re not going to kill every coyote in the city.”

An alternative to trapping is to remove food sources from residential areas — including open compost piles, bird feeders and unattended pets — and to scare the predators off with loud noises or aggressive movements including hitting them with sticks when they appear, Drake said.

Drake said coyote attacks on humans are rare, but he said there is no guarantee it couldn’t happen. People concerned about small children should supervise them closely, especially at night, in places where coyotes have become aggressive, he said.

“I hope that people aren’t running away with their imaginations and thinking (coyotes) are going to attack their kids,” Drake said. “That isn’t necessarily going to happen.”

Neighbors along Buckeye are debating on social media what to do, with some blaming others for leaving pets unattended or leaving out food scraps that attract wild animals. Others have started an online campaign to raise $2,000 to trap the predators, but it hasn’t neared its goal.

“There seem to be people in the neighborhood who want to save the coyotes,” said Larry Dobie, whose dachshund mix, Miranda, disappeared the night of Sept. 23 from his front yard on Jaarsma Court just north of Buckeye. The dog was found dead, almost certainly the victim of a coyote, a few blocks away the next day.

Dobie said he doesn’t understand why state or local government isn’t removing the coyotes, noting that his dog’s body was found behind City Church, which operates a nursery school and educational programs for children.

“If I saw a coyote in the street I’d swerve to run the thing over,” Dobie said. “If there was a dog out there doing that to other dogs, it would be euthanized.”

Hausbeck, environmental health services supervisor for the Madison and Dane County public health agency, said state law allows property owners to remove problem coyotes from their property. In rural areas, people can shoot coyotes caught doing damage, but trapping is the only option in the city.

“Our role is to look at human health impacts, talking to people about wild animal behavior and helping people to understand the things they can do to protect their animals,” Hausbeck said. “With coyotes being active in the area you just can’t afford to turn a small dog loose in your yard, even a fenced yard, especially chain link fences, which are pretty easy to scale.”

Hausbeck said several years ago a West Side neighborhood trapped a troublesome coyote.

He noted that a captured coyote would likely need to be euthanized because if it was released, it would probably just return or seek out another human food source and become a problem for someone else.

Conflicts on the rise

Conflicts with coyotes in Wisconsin seem to be increasing.

“The last two months have been packed with news about coyote conflicts in Wisconsin,” Canid Project researchers posted on their Facebook page Thursday. “Reports from Madison, Milwaukee, Neenah, Mequon, and more have included coyotes following residents while walking dogs. Citizen accounts mention aggressive coyotes. A few dogs have been attacked, even killed. Rightfully so, citizens want the issue addressed.”

Drake said a coyote that follows someone walking a dog is probably concerned the canine has invaded its territory. He said he recommends chasing them away to reduce their comfort with being near people.

Hausbeck said it’s not clear if one or several coyotes are roaming Madison’s East Side. Most of the reported attacks have been near houses that back up to wooded areas.

Gary Schindler, who lives north of Buckeye Road near South Thompson, posted on Facebook that his Yorkie, Max, was taken from his yard by a coyote a week ago.

To the south on Forge Drive, Syl Harris said he chased away a coyote that was running with its head low toward his miniature schnauzer Jayden in his back yard early on Sept. 16.

Harris said he has since seen the coyote stalking his yard. He has purchased a noise-making device to scare it off.

Tim Hein, a dog owner who lives near Buckeye Road, started the online fundraising effort for a trapper, but he noted that only 11 people had pledged money.

Hein said he found research raising questions about whether a local coyote may be about to escalate its aggressive behavior because one or more attacks on small dogs have occurred in daylight or when people were reportedly nearby.

UW-Madison’s Drake said he was familiar with the research, but noted it wasn’t inevitable that coyotes would take the next step in aggression by attacking children.

Arnie Braund lost his Yorkshire terrier, Chopper, on Sept. 11. He was standing at his back door in a neighborhood near the Dane County Regional Airport when a coyote grabbed the pet. He and his wife, Joann, ran to help.

“It just grabbed him and just trotted off in the woods,” he said. “I tried to chase him but I’m 75 years old. I’m no match for an animal.”

The Braunds have since adopted a puppy and are keeping it on a leash whenever it is outside.

“We must have a pack living out behind us because every time a siren goes by they start howling, day or night,” Braund said. “I don’t like it that they picked on my dog, but that’s their nature. You have to watch your pets.”

Representatives from the public health department and other agencies are scheduled to answer residents questions at a meeting at 7:30 p.m. Wednesday at Oak Park Place-Grandview Hall, 718 Jupiter Drive.

Chris Rickert: Dog-killing coyotes and feeling the Bern among Madison states of mind

Luckily for the state Republicans again looking at ways to boost the presence of guns in our daily lives, no one ever misses -- right?

Supporters of coyote hunting say they help control the coyote population. But they're facing a growing backlash.

Residents of Madison's East Side have a new tool in the fight against marauding coyotes: a video showing how to scare off the beast.

A test that allowed leashed dogs in 12 more Madison parks ended last month, but some want to renew and expand the program to more parks.

Cam French said she scared off a coyote that bit her Pomeranian, Charlie, in the backyard of her home on Buckeye Road on Madison’s East Side.

Cam French of Madison said her dog, Charlie, was treated by a veterinarian after a coyote snatched it last week.