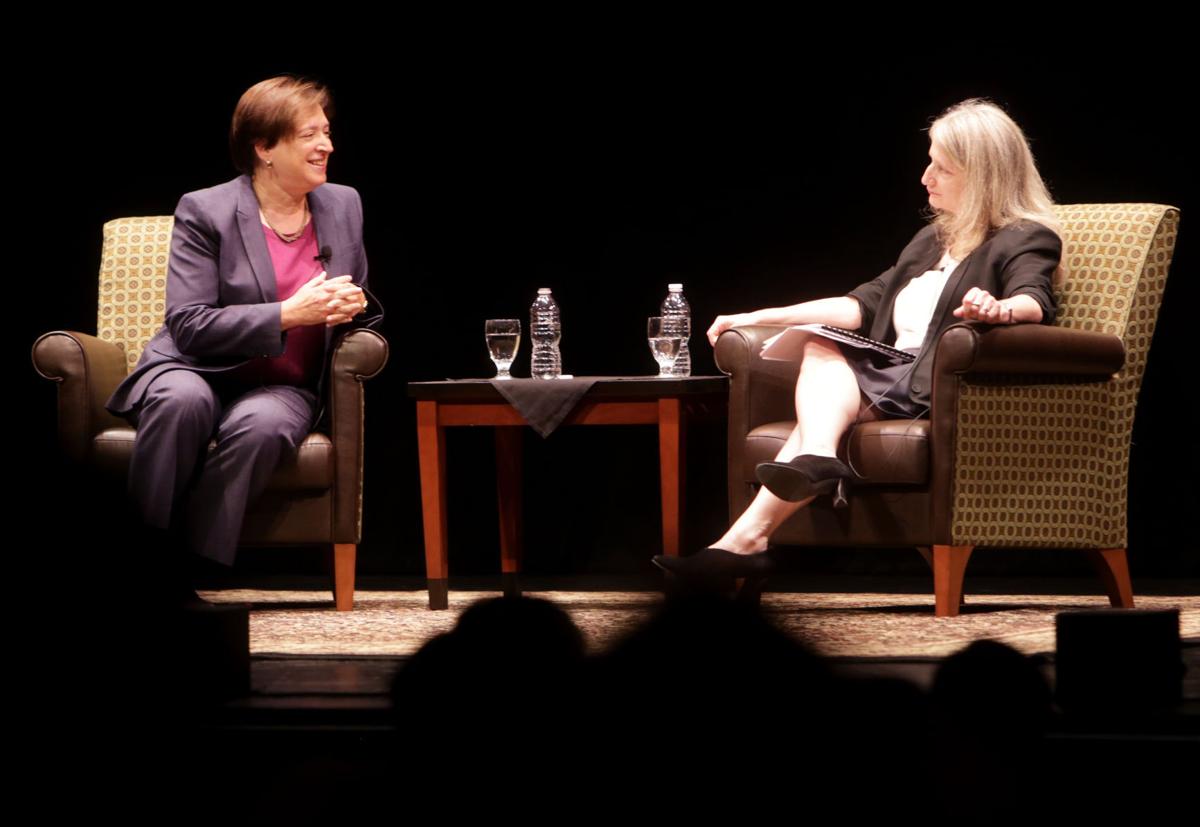 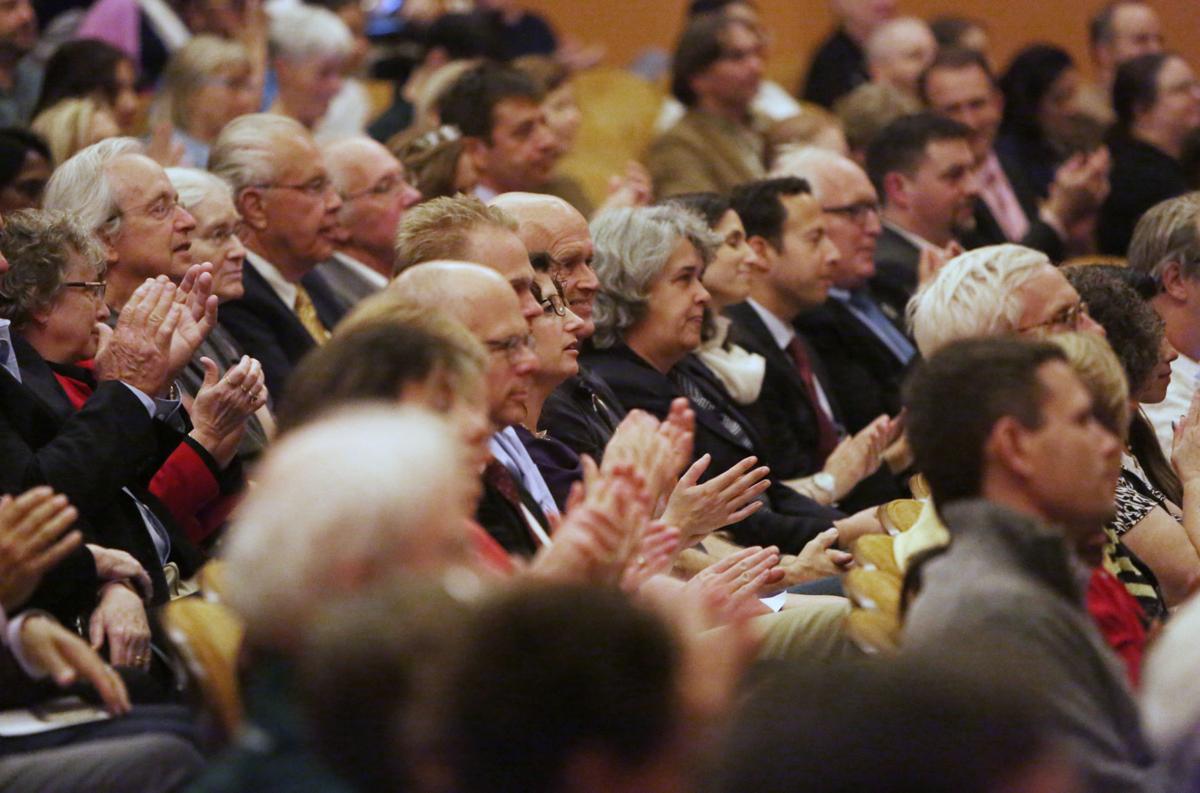 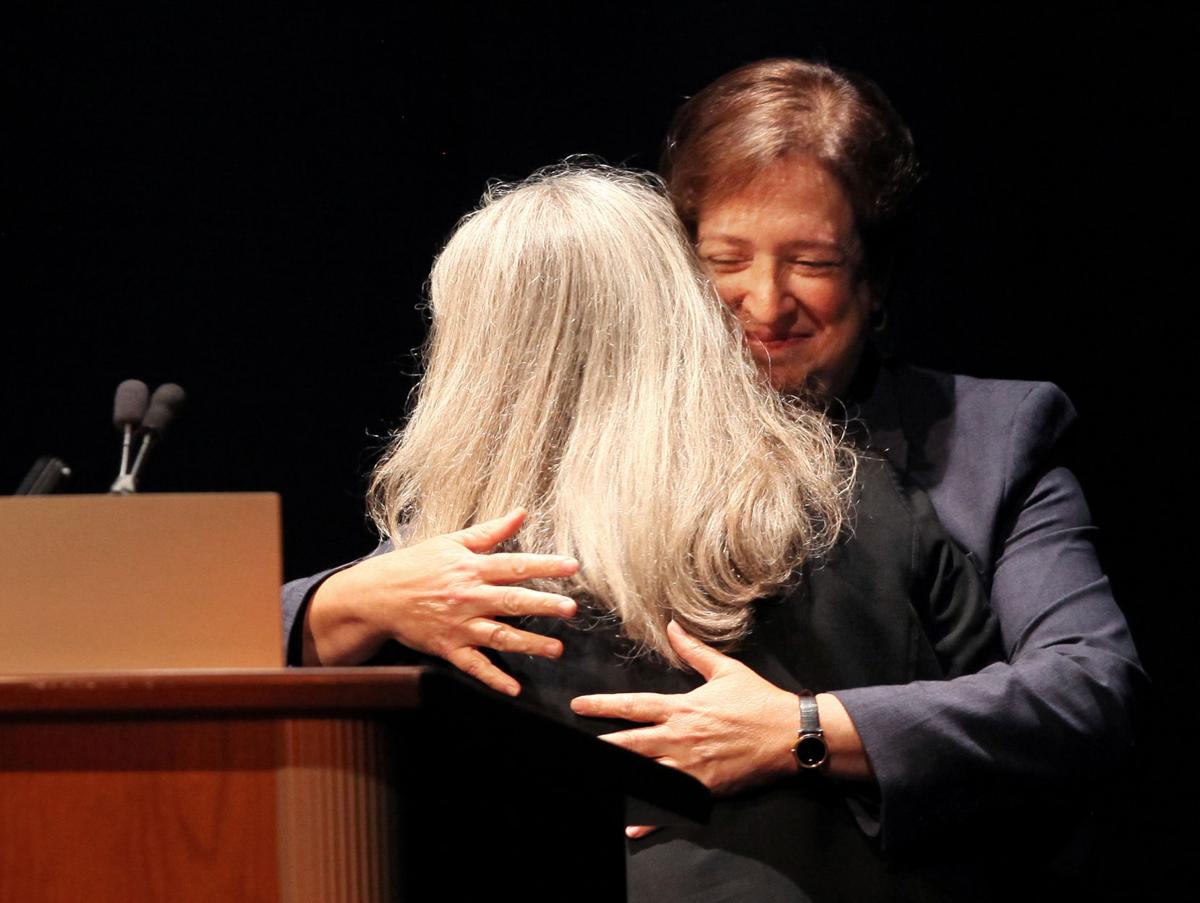 U.S. Supreme Court Associate Justice Elena Kagan hugs Margaret Raymond, UW Law School dean, as she is introduced to the audience Friday. Kagan and Raymond have known each other since childhood and graduated from the same high school in New York City.

In the year after Justice Antonin Scalia’s death, the U.S. Supreme Court was forced to make decisions based on compromise, Associate Justice Elena Kagan told an audience at UW-Madison Friday.

While it wasn’t the court’s job to be a model for civil discourse, Kagan said, the effort to avoid split decisions made members of the court come to understandings that may have seemed impossible.

In an hour-long discussion at the Wisconsin Union Theater, Kagan spoke of her rise to her seat on the high court, the influence of her parents and the importance of compromise when deciding on divisive issues.

“There are not many people, I think, who don’t look at the place we’re in (politically) and see us as very divided on quite a number of issues,” Kagan said. “You can see the discourse being pretty hot and often depressingly so.”

With an even-numbered court prior to Associate Justice Neil Gorsuch filling the ninth seat on the bench, accepting 4-4 ties on cases would make the court seem divided and incapable of getting its work done, Kagan said.

“I think we all made a very serious effort to try to find common ground, even where we thought we couldn’t,” Kagan said. “It sort of forced us to keep talking with each other.”

‘A place where we can agree’

Working toward common ground through continuous debate and discussion has bettered the court, and that work ethic shouldn’t be forgotten, Kagan said.

It wasn’t a lifelong dream for Kagan to practice law. While she was growing up in New York City, her father was a lawyer and his job didn’t seem interesting — there weren’t any of the dramatic court battles that you see on television. She said she only went to law school because she didn’t know what else to study.

It was at Harvard Law School that Kagan found her passion for the law. Nearly 25 years later, she was nominated by then-President Barack Obama and in 2010 became the fourth woman to serve on the Supreme Court.

UW Law School Dean Margaret Raymond introduced Kagan and led the discussion. The two have been friends since middle school, and both graduated from Hunter College High School.

When asking about the influence of Kagan’s family, Raymond referred to Kagan’s mother as “formidable.” Kagan agreed.

“Boy, my mother’s voice is in my head all the time … because she demanded things, but she taught you to demand things from yourself,” Kagan said. Her mother taught her the importance of effort, discipline and commitment, she said.

Kagan also had some advice for lawyers presenting their arguments before the Supreme Court: There is no right or wrong persona to have, be prepared to strengthen the weak points in your case, and know that sometimes the justices know the answers to their own questions.

“Often the justices aren’t really asking you questions,” Kagan said. “They don’t really care about the answers you give. They’re making points to their colleagues.”

U.S. Supreme Court Associate Justice Elena Kagan will be on the UW-Madison campus Friday, to talk about her life in law.

The council's executive committee voted in June to give attorney April Southwick the title of executive director and raise her salary from $59,600 to $82,326.

The new dean succeeds Margaret Raymond, who has led the school since 2011 and will return to the faculty in August.

U.S. Supreme Court Associate Justice Elena Kagan hugs Margaret Raymond, UW Law School dean, as she is introduced to the audience Friday. Kagan and Raymond have known each other since childhood and graduated from the same high school in New York City.