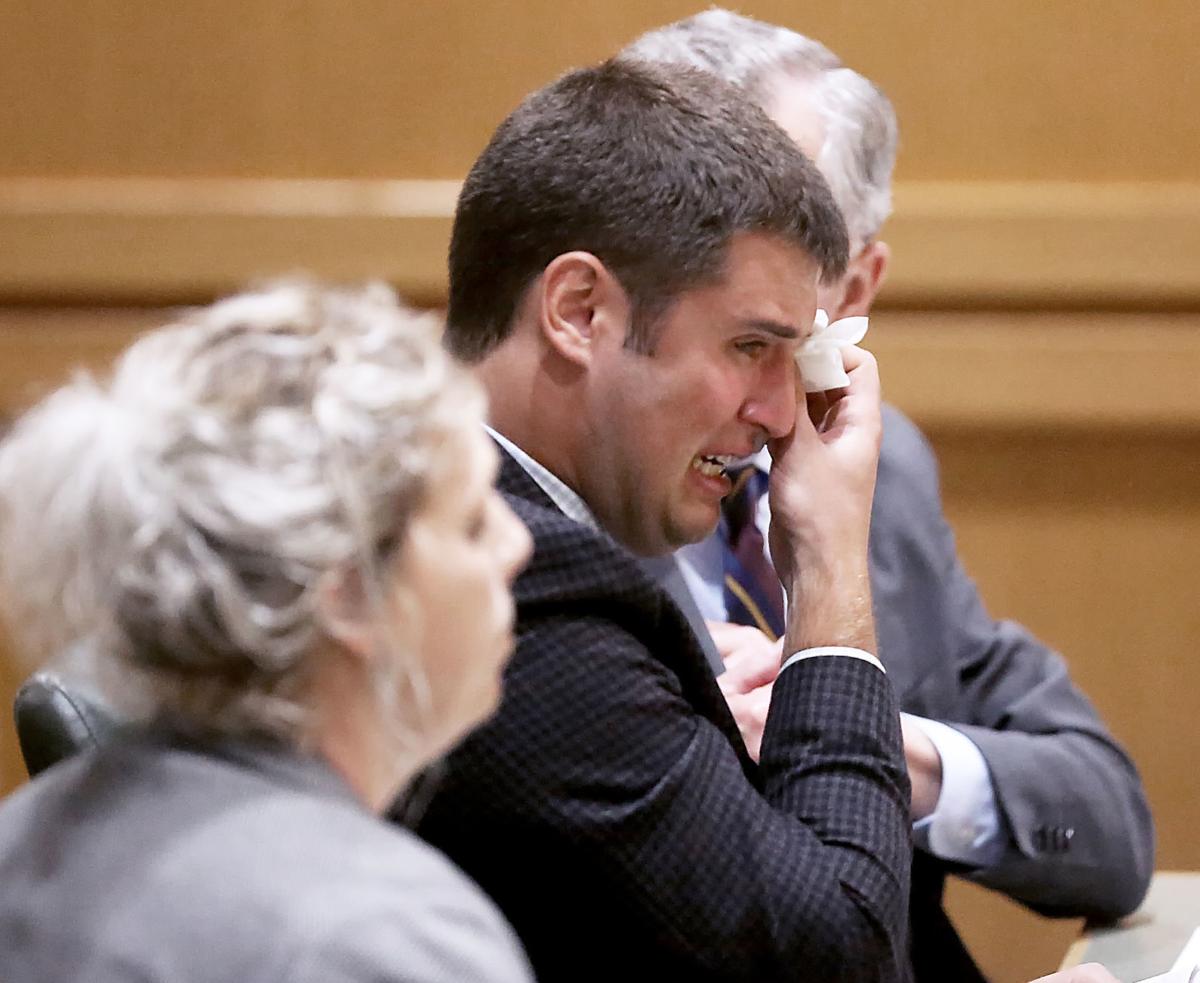 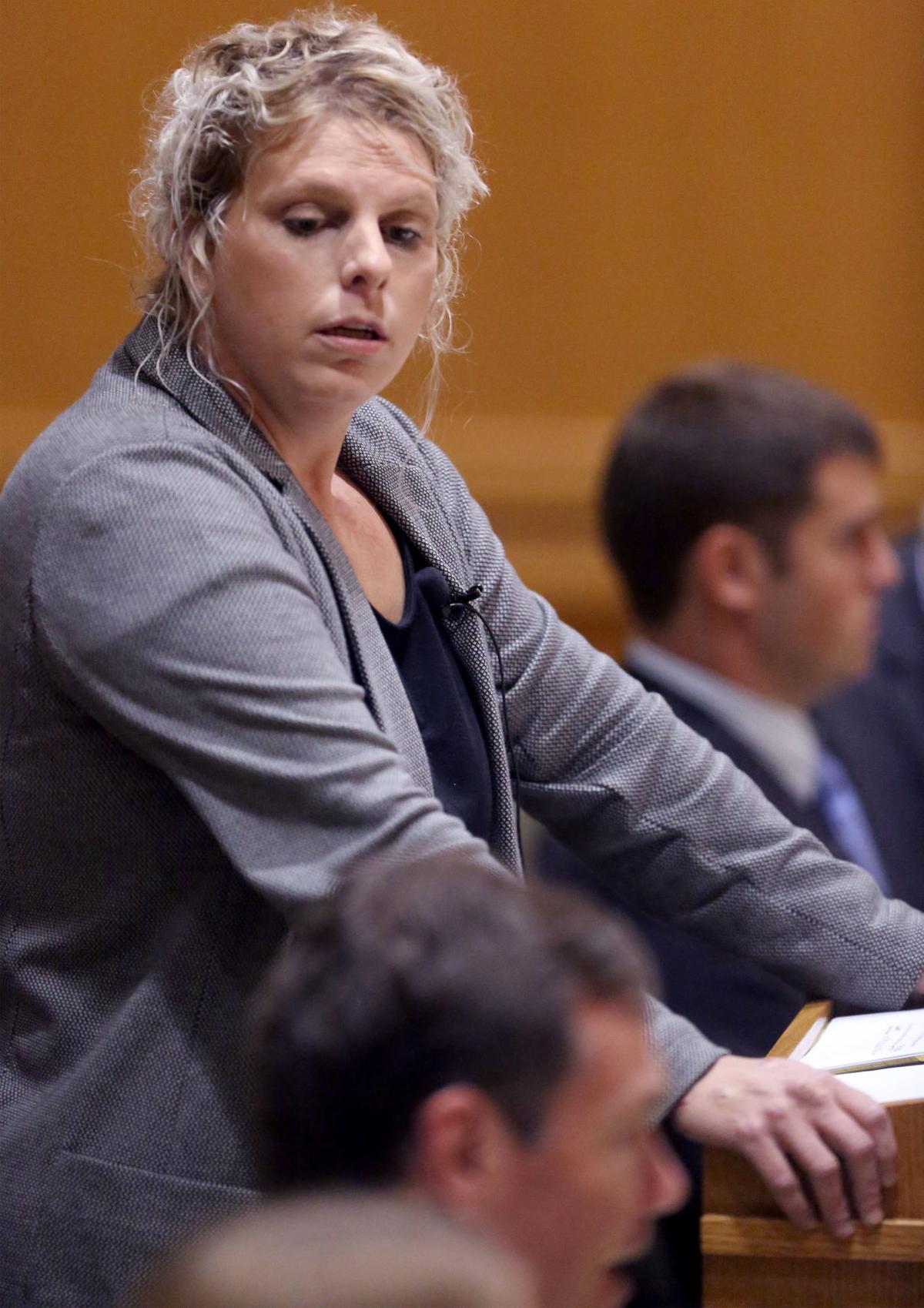 Jessa Nicholson Goetz, attorney for former UW-Madison student Alec Cook listens to remarks by Wisconsin Assistant Attorney General Christopher Liegel during Cook's sentencing hearing Thursday, which at one point devolved into a testy exchange between prosecutors and Cook's attorneys over the way the case was handled. 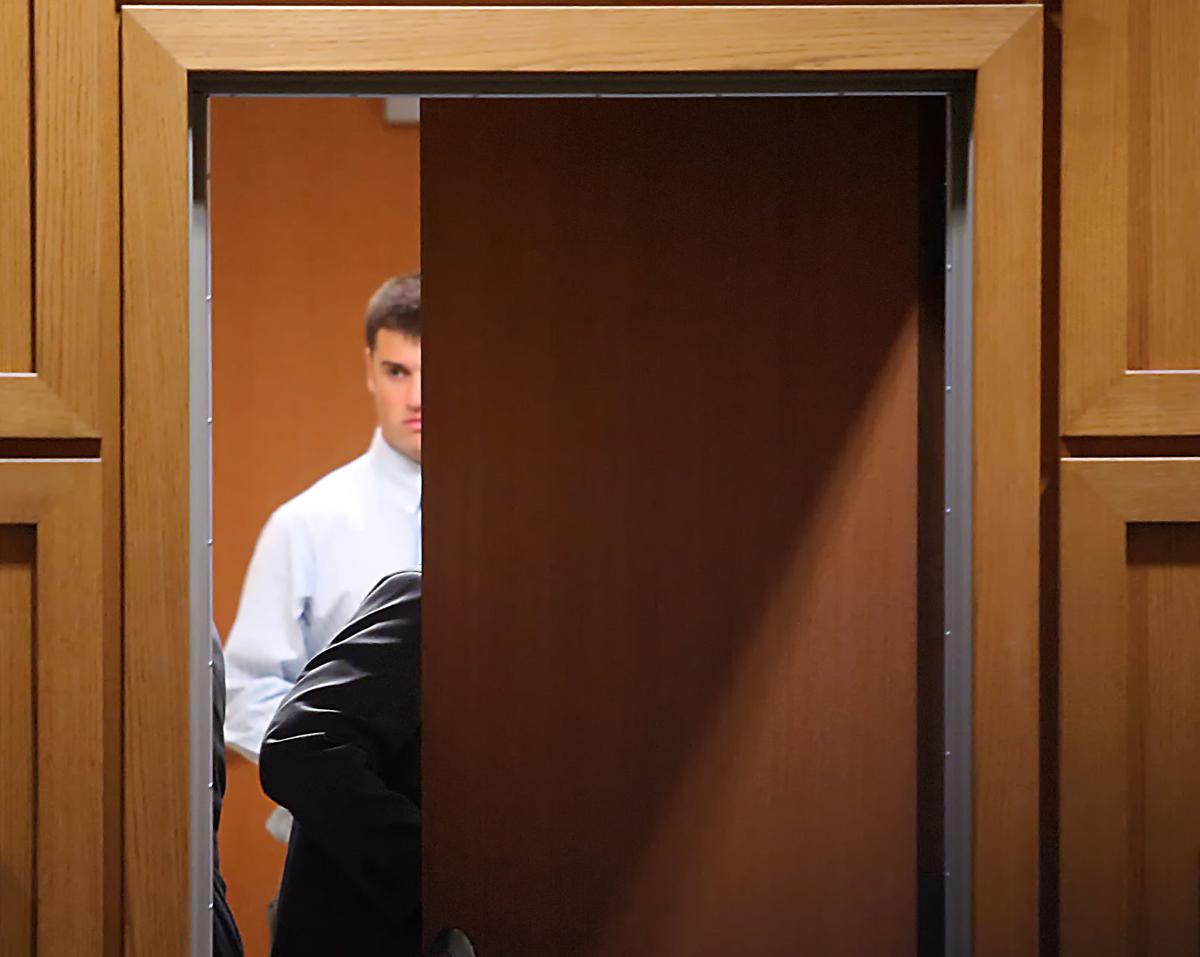 A door to a secure area of the Dane County Courthouse closes after former UW-Madison student Alec Cook is taken into custody following his sentencing hearing Thursday. 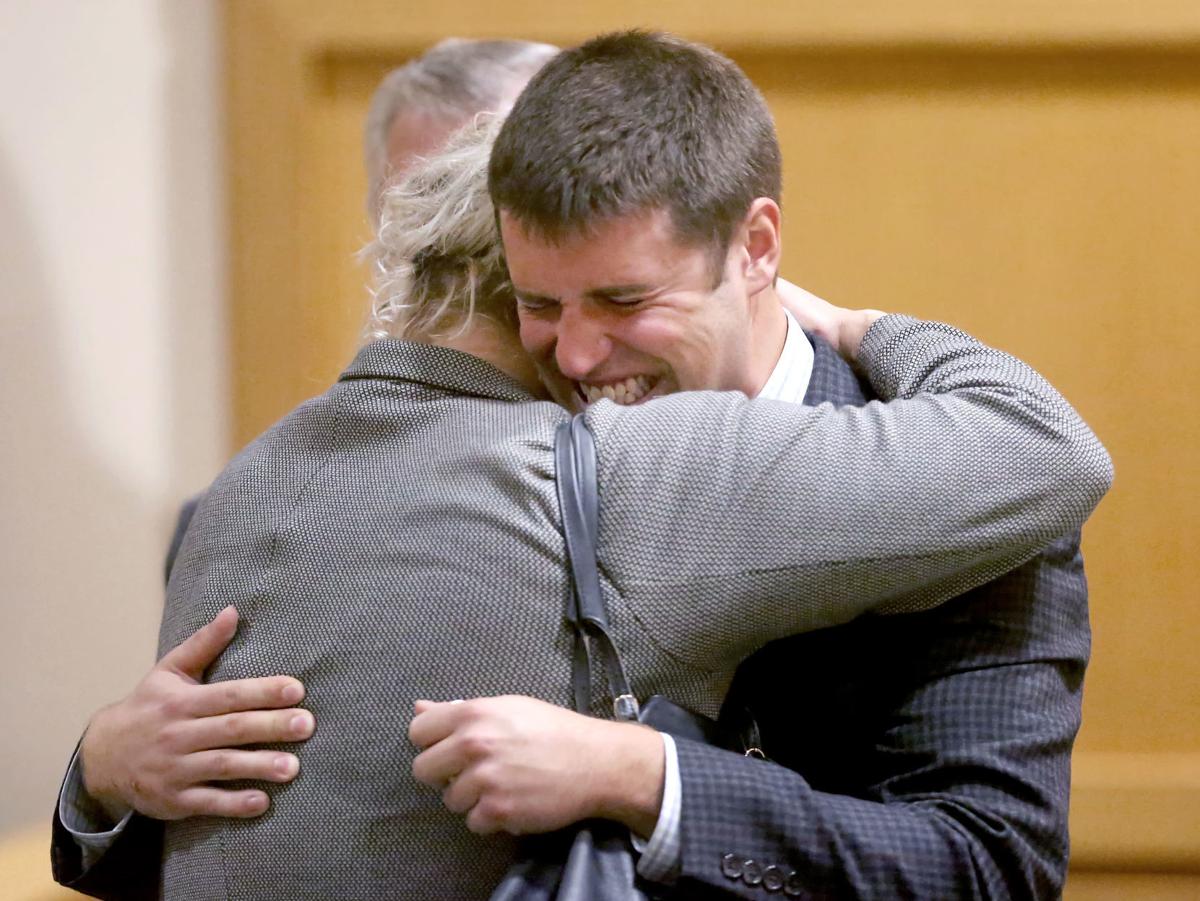 Former UW-Madison student Alec Cook is his consoled by his attorney, Jessa Nicholson Goetz, during a break in his sentencing hearing on Thursday. 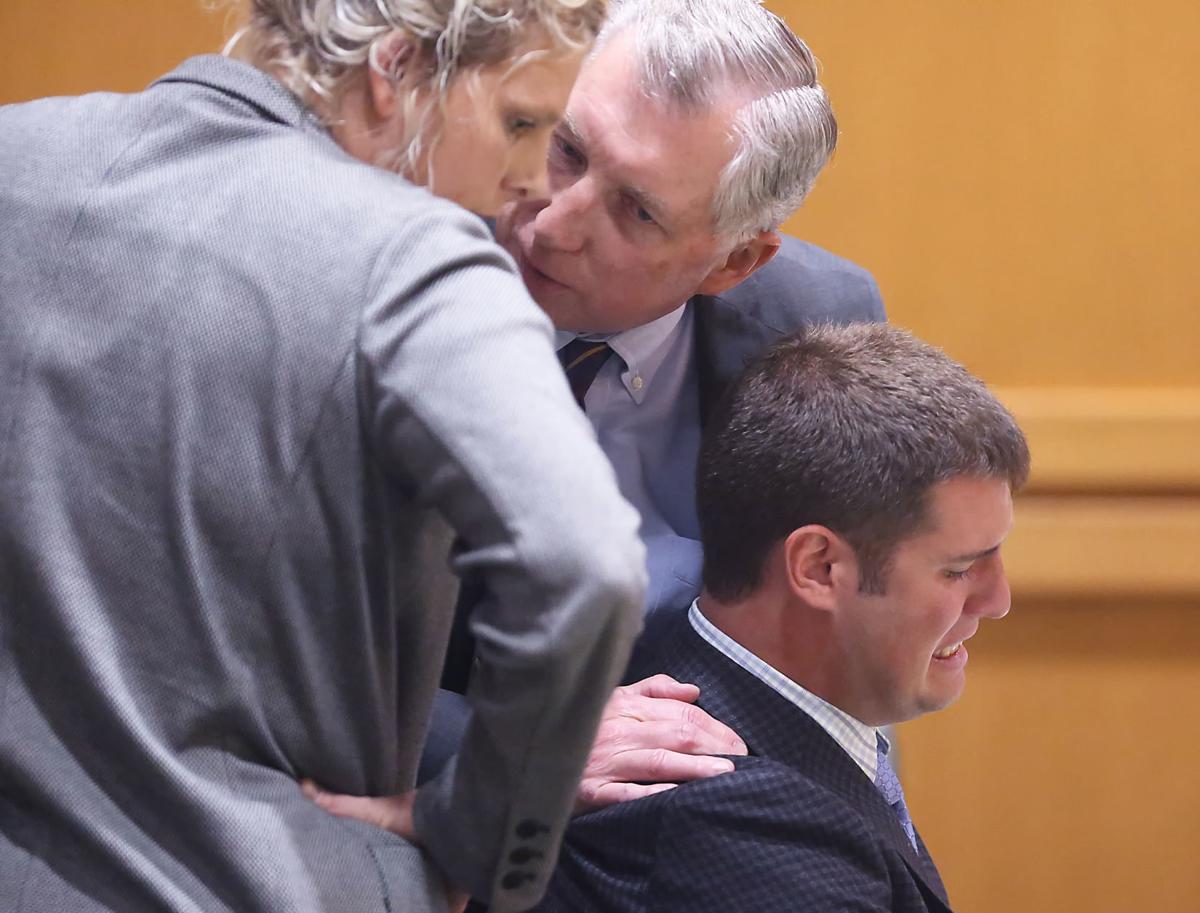 Dane County Circuit Judge Stephen Ehlke said he struggled with the right thing to do in his decision but said his primary concern in sentencing Cook was that the victims’ voices be heard. He closed by hoping that the end of criminal proceedings against Cook would “give closure” to the women who said Cook had sexually assaulted, harassed or stalked them.

Talking about the statement given by one woman, in which she spoke about feelings of “shame and worthlessness” after Cook had “preyed upon my kindness which I then began to see as a weakness,” Ehlke’s voice broke.

“Please, continue to be kind,” he said, then took a long pause to collect himself, “and positive, and don’t let him take that from you.”

In his statement to the court, Cook tearfully apologized to the women, telling them that what happened to them was not their fault.

“I’m sorry. I was wrong,” Cook said. “You told the truth and everyone should believe you. This is my fault. You didn’t deserve this. And neither did your families. To them, too, I’m so sorry.”

Cook, 22, of Edina, Minnesota, pleaded guilty in February to three counts of third-degree sexual assault, and one count each of strangulation and stalking.

For each count of third-degree sexual assault, Ehlke sentenced Cook to three years of prison and ordered that the sentences be served concurrently. That will be followed by five years of extended supervision. Ehlke also sentenced Cook to three years of probation for the strangulation and stalking convictions, and ordered those sentences to begin after the sexual assault sentences, which will mean Cook will remain under state supervision for eight years after his release from prison.

Ehlke said Wisconsin law requires courts to impose the minimum sentence to hold a defendant accountable, without being governed by emotions. He predicted that some would be disappointed that he didn’t impose a “maximum” prison sentence, but he said a prison sentence is uncommon in a case of this kind for a defendant who has no prior criminal record.

“The Wisconsin Department of Justice is disappointed that Alec Cook did not receive the much longer sentence the prosecution team recommended, and we still believe that is what Alec Cook deserves,” Schimel said, adding that he hoped the fact that Cook was headed to prison “will give survivors faith that there are people in the criminal justice system who stand ready to fight for justice for them.”

Cook was charged in 2016 and 2017 with 23 criminal counts that included 12 counts of varying degrees of sexual assault involving six women, along with several other charges that included stalking, disorderly conduct and false imprisonment. Prosecutors had alleged that 11 women were the victims of sexual assault or harassment by Cook, with most of the incidents on or near the UW-Madison campus, in 2015 and 2016.

Cook was expelled from UW-Madison in June 2017 after having been suspended from school since his arrest.

Seven separate trials were set in the case until Cook pleaded guilty to the five charges. The remaining charges against him were dismissed, but Ehlke was allowed to consider them when he sentenced Cook. How much Ehlke was to consider them was the subject of some debate between prosecutors and Cook’s lawyers, Chris Van Wagner and Jessa Nicholson Goetz. The defense said Cook hadn’t admitted to the conduct that comprised the dismissed charges, only the conduct described by the charges to which he pleaded guilty.

Ehlke said he didn’t find the back-and-forth “helpful in either direction.”

In his sentencing argument, in which he sought 19½ years in prison for Cook, Liegel said Cook’s activities since arriving on the UW-Madison campus in 2014 amounted to a “campaign against women” in which he sexually assaulted, stalked and harassed female students.

Liegel called Cook a “master manipulator” who “inflicted violence on (women) because he enjoyed seeing them hurt.” Cook told a state Department of Corrections pre-sentence report writer that he didn’t understand the wrongfulness of his actions, Liegel said, when “Alec Cook knows perfectly well what the boundaries were.”

Nicholson Goetz, who asked that Cook receive probation, began her sentencing argument by putting the case in the context of the current #MeToo movement and the downfall of once-powerful men in the entertainment industry after their sexual misdeeds were exposed, saying the Cook case is “inextricably linked” to those near-daily revelations and is being watched nationally.

She also lashed out at the prosecution for mentioning in its sentencing memorandum Brock Turner, whose sexual assault case in California raised ire nationally because of what many felt was a too-lenient sentence.

“The reference was a clumsy attempt to bully the court,” Nicholson Goetz said. “It’s the court’s duty not to be bullied, not to be swayed by public opinion.”

Ehlke said that wasn’t a factor, that he was applying the sentencing factors under Wisconsin law “to this defendant, in this case.”

She continued to criticize the prosecution and what she called “mud-slinging” by both sides in the case, justified on the defense side as its duty to fairly represent Cook. She also said the victims in the case clung to facts that prosecutors knew were not true, such as the existence of a notebook of Cook’s in which the word “kill” was badly misinterpreted.

“The painful truth is that this case was overcharged and mishandled at every turn,” Nicholson Goetz said.

When she began to comment on one of the victims whose allegations Cook did not admit as part of the plea agreement, Liegel objected, leading to a heated exchange.

Nicholson Goetz was “airing grievances,” Liegel said, not helping the court decide a sentence for Cook. Ehlke agreed that it wasn’t helpful, and Nicholson Goetz moved on. She emphasized that Cook needs treatment for diagnosed mental health issues, which include personality disorder including narcissism, drug dependency and sexual sadism disorder.

Dr. William Merrick, who examined Cook last year, testified that treatment for Cook’s personality disorder is not available in prison, and any other mental health treatment he got would be reserved for the final three years that he is incarcerated.

“He has changed,” Nicholson Goetz argued. “It’s a slow road. But his character is developing.”

Asked by Liegel on cross-examination whether Cook was even interested in treatment, Merrick said, “No,” but later went on to explain that Cook began therapy since the time that Merrick examined him in July 2017.

The most-read stories of June

2018 year in review: Highs and lows of the past 12 months in the Madison area

While you're waiting for the ball to drop in Times Square, take a few moments to recall some the Madison area's biggest stories of 2018.

Lawyers for former UW-Madison student Alec Cook wrote Wednesday that they may demand testimony in court from victims of Cook in order to disprove prosecution claims about the violence of their encounters with Cook.

State prosecutors are asking in a sentencing memorandum that former UW-Madison student Alec Cook, convicted of sexual assault, strangulation and stalking, spend more than 19 years in prison for his crimes.

Former UW-Madison student Alec Cook will plead guilty on Wednesday to five of the 21 criminal counts he faces.

Notebooks and other evidence seized from the apartment of former UW-Madison student Alec Cook, accused of sexual assault and other crimes, can't be used as evidence at his upcoming trials, two judges ruled Friday.

Trials for former UW-Madison student Alec Cook, accused of sexual assault and harassment of women, will be held outside Dane County after two judges granted a change of venue motion brought by Cook's lawyers.

The first trial for former UW-Madison student Alec Cook, which was to be in December, was pushed back Wednesday after motions to pick a jury from outside Dane County and to suppress certain evidence were filed by Cook's lawyers.

The first trial against ex-UW student Alec Cook is set to start in December, with two others in February and April. Four other trials have not been scheduled yet.

A judge ruled that the primary case against Alec Cook will be broken into six separate trials. Another judge has already ruled that a later case against Cook also would be tried separately.

Charges involving one of 11 alleged victims of Alec Cook will be tried separately, decision on other possible separate trials to come next month.

The former president and treasurer of a statewide nursing education group was charged with stealing nearly $85,000 from the group's bank accounts.

Chief Kristen Roman voiced disappointment with the three-year sentence Alec Cook received for sexual assault, strangulation and stalking, and encouraged others to take a holistic examination of the current system and work to improve it.

Jessa Nicholson Goetz, attorney for former UW-Madison student Alec Cook listens to remarks by Wisconsin Assistant Attorney General Christopher Liegel during Cook's sentencing hearing Thursday, which at one point devolved into a testy exchange between prosecutors and Cook's attorneys over the way the case was handled.

A door to a secure area of the Dane County Courthouse closes after former UW-Madison student Alec Cook is taken into custody following his sentencing hearing Thursday.

Former UW-Madison student Alec Cook is his consoled by his attorney, Jessa Nicholson Goetz, during a break in his sentencing hearing on Thursday.