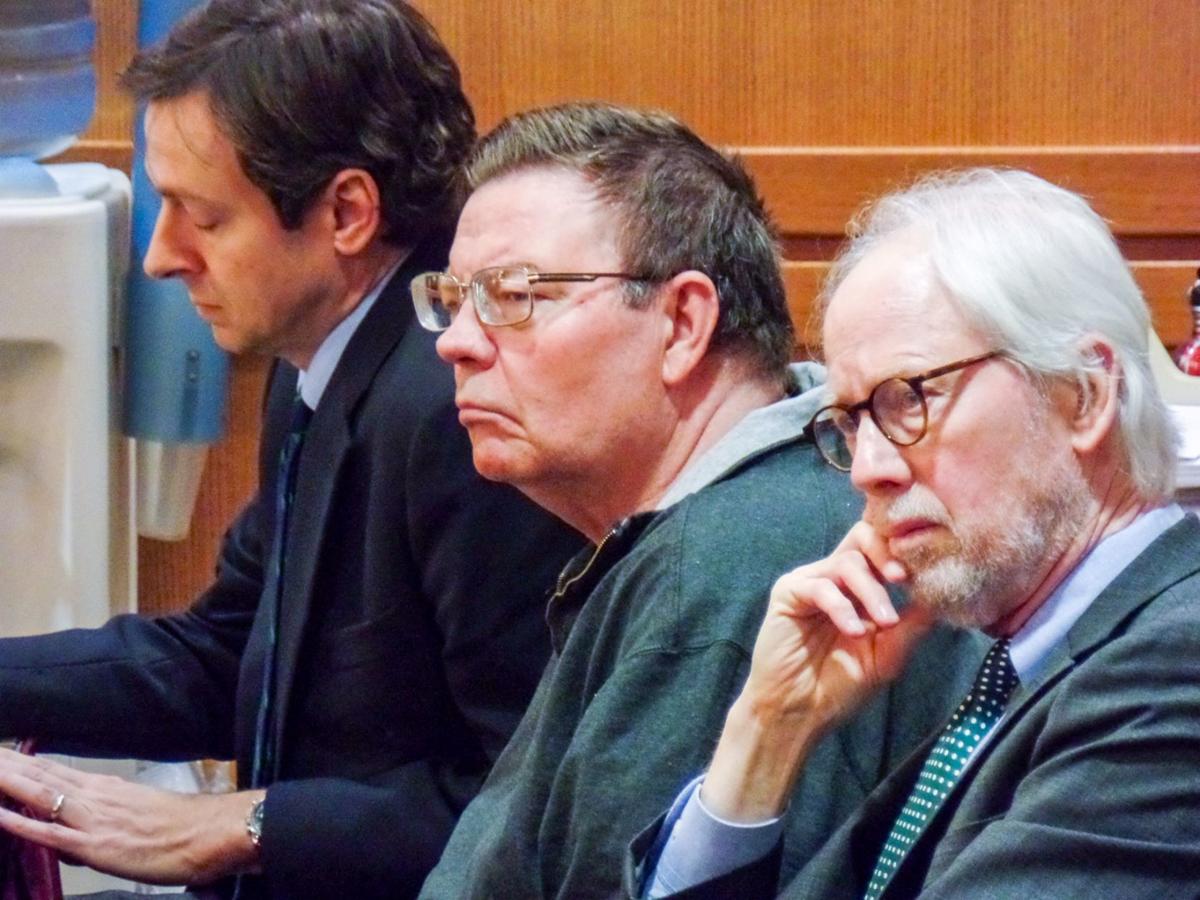 Daniel Lieske, center, listens with his lawyers, Richard Coad, left, and Dennis Burke as jurors confirm their verdict that found him guilty Wednesday of first-degree intentional homicide for the Jan. 16, 2018, death of Jesse Faber. 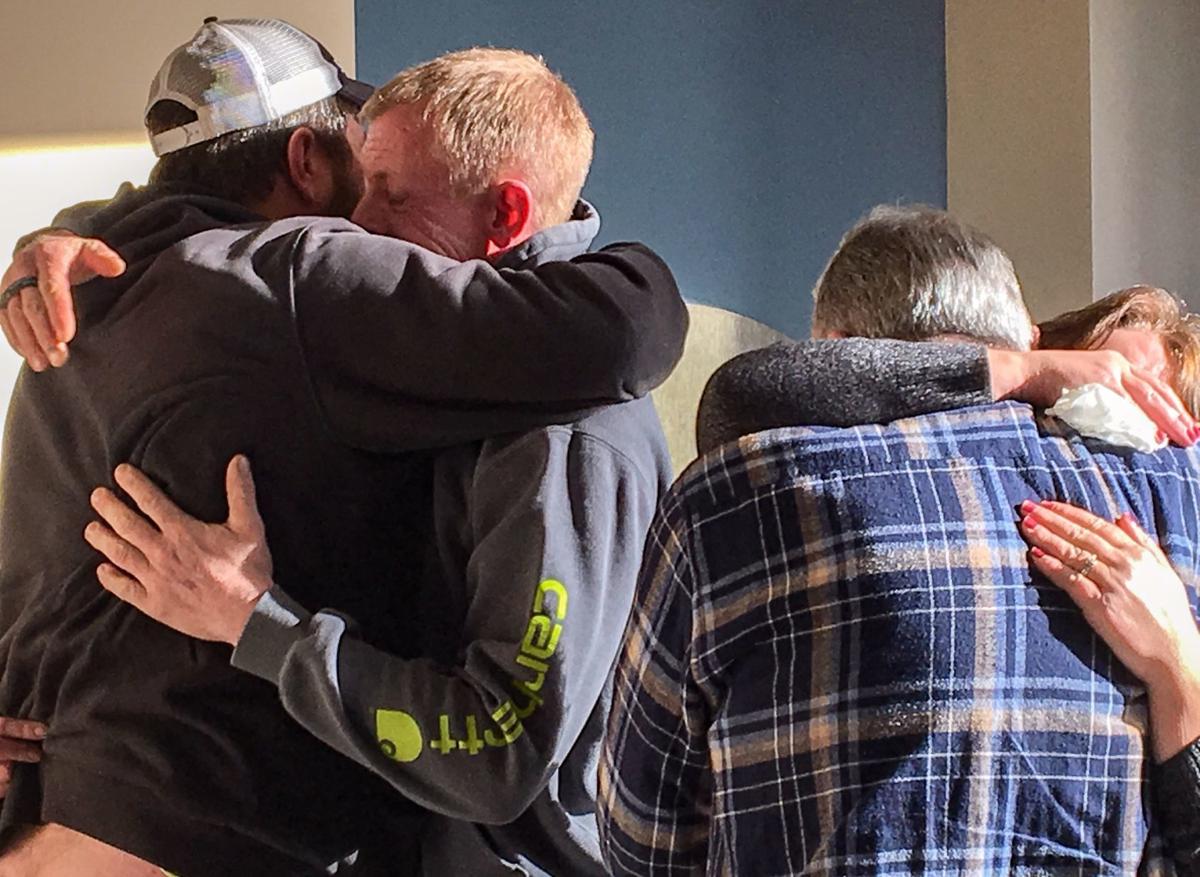 Supporters of Jesse Faber, who was killed a year ago by Daniel Lieske, embrace after hearing a verdict that found Lieske guilty of first-degree intentional homicide for Faber's death. At left is Faber's father, Daniel Faber.

A jury found Daniel Lieske guilty Wednesday of first-degree intentional homicide in the death of a 21-year-old Sun Prairie man, one year to the day after the shooting at Lieske’s town of Medina home that took Jesse Faber’s life.

A jury of seven women and five men deliberated for nearly six hours Tuesday and five more hours on Wednesday before finding Lieske, 60, guilty of shooting Faber to death on Jan. 16, 2018, in an unoccupied apartment that adjoined the one where Lieske lived with his longtime girlfriend, Meichelle Goss.

Lieske then hid Faber’s body as Faber’s friends and family, along with authorities, searched for him, until authorities found Faber’s body rolled into a rug that was covered in plastic in a self-storage locker in Rio that had been rented by Lieske.

The verdict followed a trial that began on Jan. 7 and ended with closing arguments on Tuesday.

In his closing argument, Lieske’s lawyer, Dennis Burke, said Lieske shot Faber to death after Faber attacked Lieske, based on statements Lieske made to Goss shortly before and after the shooting and recounted in testimony by Goss. Lieske did not testify.

“My son is not a murderer,” April Faber said. “He was a sweet, sweet boy who didn’t deserve this.”

She said the trial was “life-altering” for her entire family, which packed the meager seating in the courtroom each day of the trial. The family reacted to the verdict with a blend of elation and tears, and a lot of long hugs.

“Without them, I don’t think I would have made it,” April Faber said.

Daniel Faber, Jesse Faber’s father, said the fact that the verdict came on the anniversary of his son’s murder was, and wasn’t, fitting.

“It is and it isn’t appropriate,” Daniel Faber said. “He should be here.”

While the verdict brings some closure, “going through this trial opened up old wounds,” April Faber said. “But in the end, it’s worth it.”

Dane County Circuit Judge Jill Karofsky ordered a pre-sentence investigation by the state Department of Corrections, ahead of a sentencing hearing that will happen in about two months. Lieske faces a mandatory life prison sentence for the homicide conviction and will also be sentenced for hiding a corpse to conceal a crime, a charge he pleaded guilty to just before his trial began.

Goss has also pleaded guilty to hiding a corpse to conceal a crime.

At the sentencing hearing, Karofsky will set a time when Lieske will be eligible for release from prison on extended supervision, which under state law cannot be before 20 years.

Lieske reacted little to the verdict after it was read by Karofsky. He and Burke watched the faces of jurors as Karofsky polled jurors one by one, to assure that the verdict was the one they agreed to.

In closing arguments Tuesday, Burke said Lieske killed Faber in self-defense, calling Faber a “live wire” who before that night was unknown to Lieske but, by the early morning hours, had attacked him, forcing Lieske to shoot Faber. Both men had been drinking heavily.

“He shot him and intended to kill him,” Burke said. “That’s what he thought he had to do to protect himself and (Goss) and everything they had from this live wire.”

Burke said he didn’t know exactly what caused Faber to attack Lieske. Goss testified about statements Lieske made before and after the shooting, telling jurors that Lieske was “scared, traumatized and distraught,” after the shooting. Burke said Lieske told Goss that Faber tried to grab Lieske’s gun, which Lieske was wearing in a holster.

But prosecutors said the evidence didn’t back up Lieske’s story, and the measures that Lieske took to cover up the crime — from dumping paint on carpet to hide blood stains to hiding Faber’s body — showed consciousness of guilt on Lieske’s part.

District Attorney Ismael Ozanne, in his closing argument, said despite claiming to have been attacked by Faber, Lieske didn’t call police, which most people do when forced to defend themselves from an attack. It was only after authorities appeared to be figuring out what really happened to Faber that Lieske called Goss’ mother and confessed to killing Faber, after days of lying to investigators who at first thought they were looking for a missing person.

Lieske first said that Faber had stepped out of Lieske’s home for a cigarette and never returned. As the search for Faber came to Lieske’s door, he unlocked buildings on the property for searchers looking for Faber, knowing all the while that he had stashed away Faber’s body, Ozanne said.

Jurors are deciding whether Daniel Lieske was properly defending himself when he shot and killed Jesse Faber at Lieske's rural Marshall home last year.

A Dane County medical examiner said Monday that Jesse Faber was shot at close range, twice in his back and once in the back of his head.

Meichelle Goss, longtime girlfriend of Daniel Lieske, who is charged with first-degree intentional homicide for the Jan. 16 shooting death of Jesse Faber, testified Wednesday that she was afraid to call authorities after Faber's death.

A woman who admitted she helped move the body of a homicide victim to a storage shed pleaded guilty Thursday to being a party to hiding a corpse.

Lawyers for Daniel Lieske, trying to bolster his self-defense claim, will not be allowed to put on testimony claiming that shooting victim Jesse Faber had a combative reaction to the sight of guns, a judge rules.

A motion by lawyers for Daniel Lieske says that shooting victim Jesse Faber reacted strongly to guns, causing Lieske to act in self-defense.

Man charged in homicide near Marshall pleads not guilty, trial set for June

Daniel Lieske pleaded not guilty to shooting Jesse Faber to death on Jan. 16, and will stand trial starting June 18.

Daniel Lieske was ordered to stand trial Tuesday for the shooting death in January of a Sun Prairie man.

A Marshall man accused of first-degree intentional homicide told police the victim threatened to kill him, according to a search warrant.

Daniel C. Lieske admitted to police that he shot and killed Jesse Faber last week at an apartment outside Marshall, according to a criminal complaint, whose body was then hidden in a storage shed in Rio.

Daniel Lieske, tentatively charged with the shooting death of Jesse Faber, was jailed on $350,000 bail after appearing in court Friday, and will await formal charges expected to be filed next week.

The search for a missing Sun Prairie man has turned into a homicide investigation after police found the man's body in a storage unit in Rio, Dane County Sheriff Dave Mahoney said Thursday.

Woman receives probation, jail for her role in hiding body after shooting death

Meichelle Goss, who pleaded guilty to helping her boyfriend, Daniel Lieske, hide the body of Jesse Faber in January 2018, was sentenced to probation Monday, with nearly a year in jail as a condition of her probation.

Daniel Lieske, center, listens with his lawyers, Richard Coad, left, and Dennis Burke as jurors confirm their verdict that found him guilty Wednesday of first-degree intentional homicide for the Jan. 16, 2018, death of Jesse Faber.

Supporters of Jesse Faber, who was killed a year ago by Daniel Lieske, embrace after hearing a verdict that found Lieske guilty of first-degree intentional homicide for Faber's death. At left is Faber's father, Daniel Faber.