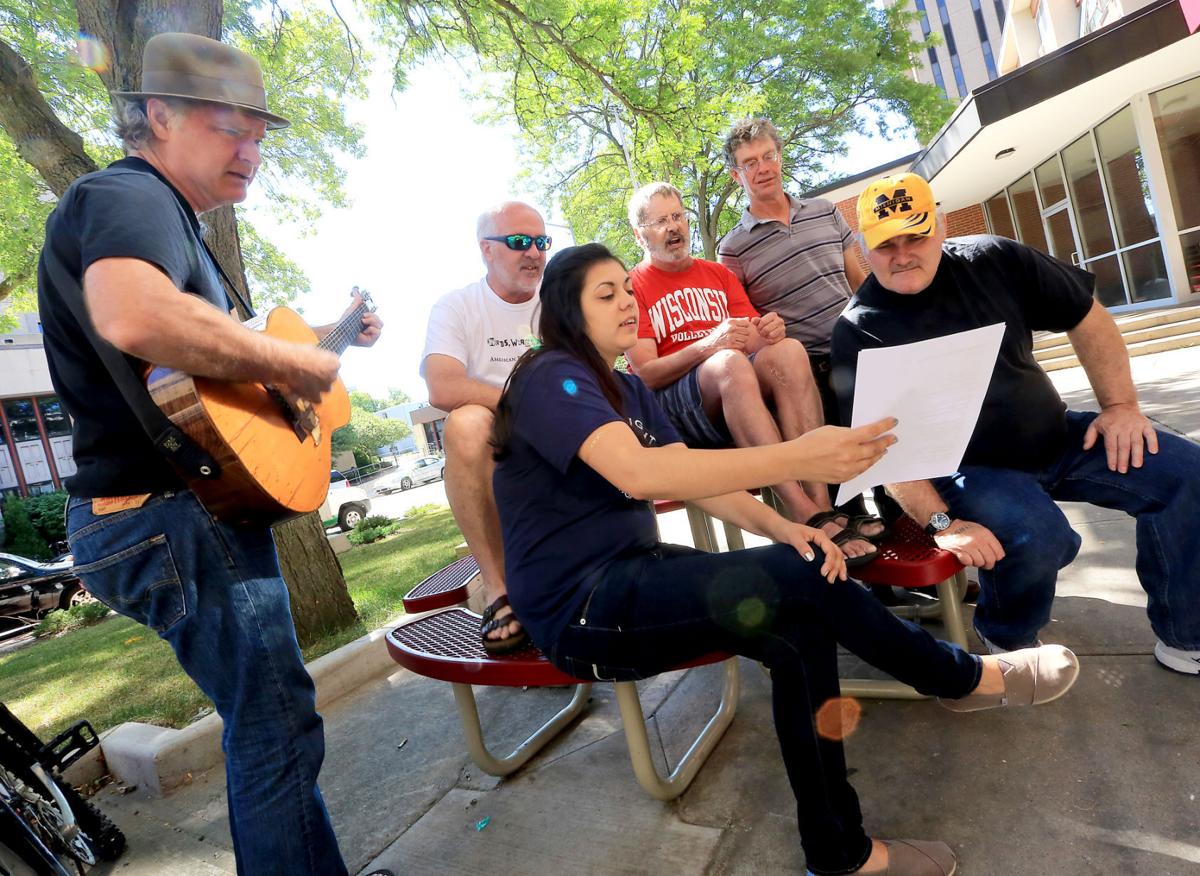 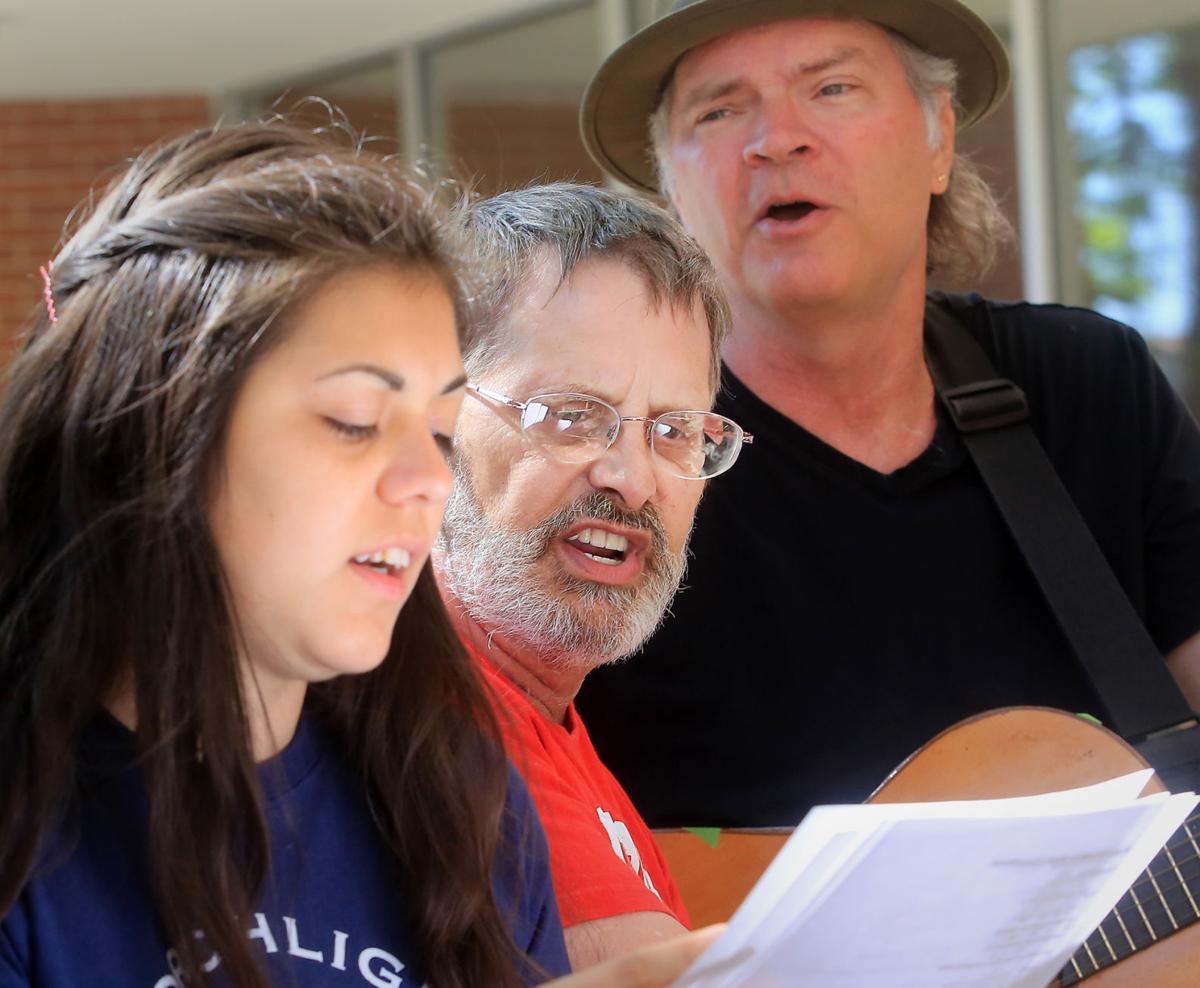 Musician Ken Lonnquist accompanies Jessica Pastelin, director of development at Porchlight, left, and John Terry, a Porchlight resident, in a song as performers and organizers of The People's Chorus gather for a portrait.

The “West Side Story” lyric will have a new meaning Monday night, as a number of homeless people will find a place singing on the Orpheum Theatre stage.

The People’s Chorus, a choir of homeless and formerly homeless people from Madison, will perform gospel and classic American standards alongside more than 90 professional singers. The concert benefits Porchlight, a non-profit working to decrease homelessness in the Dane County area.

The People’s Choir concert is the brainchild of Scott Foss, music director at First United Methodist Church. Helping homeless people in the community is part of the church’s mission to be “Downtown for good.” There are many homeless people that live near the church, people Foss said he sees every day and considers his neighbors.

The owners of the Orpheum Theatre, the Paras family, are donating its use, a donation Foss said truly turned the concert into a special occasion. Local musicians enthusiastically agreed to sing with The People’s Chorus, he said.

“What we all do is make music and we understand the impact music has on our lives,” he said. “But maybe a homeless person doesn’t have that. We wanted to give them that, to be part of the experience to make music.”

In addition to The People’s Chorus, the concert will feature artists and ensembles from Isthmus Brass Ensemble, Madison Opera Chorus, Wisconsin Chamber Choir and many other vocal and music groups.

Foss said he’s hoping members of The People’s Chorus will feel the power he’s felt performing in a large choir, particularly in a grand performance hall.

“I also want them to experience standing in the center of a music ensemble,” he said. “The power of that could really give them hope.”

Event organizers hope to raise $25,000 for Porchlight’s Capital Campaign, an effort to build a new facility on Lien Road. The space will have residential housing for more than 20 individuals and a commercial kitchen for Porchlight Products, an employment and employment-training program for residents and program participants with disabilities.

Porchlight Products currently creates 12 products a year from a small kitchen at the Porchlight North Brooks Street location. This summer, the workers made 2,000 jars of strawberry rhubarb jam. They plan to can 3,000 jars of applesauce and apple butter in the fall. The products are sold to markets and restaurants.

The Porchlight Products program teaches cooking and provides participants with job skills and confidence, Porchlight Executive Director Steven Schooler said in an email. Confidence is a key factor to combat the stigma attached to homelessness and mental illness, Schooler said.

“Stigma is something we battle every day. When Scott approached me about this concert, I was thrilled,” he said. “What better way than through the arts, particularly the performing arts, to confront the stigma and stereotype?”

Porchlight Director of Development Jessica Pastelin said the concert is a new idea for the individuals she works with, but it’s an idea that fits with their background.

“A lot of the participants have really strong connections to their faith, so they have experience singing in choirs,” she said. “But to be able to perform in a venue such as the Orpheum is really amazing for them, or for anyone.”

John Terry Jr., 60, is a resident at Porchlight’s North Brooks Street location. The housing and AODA resources helped him gain sobriety from alcohol addiction, he said.

“I’m a person again,” he said. “Porchlight gave me a reason to stay sober.”

A Janesville native, Terry said years of alcohol addiction led him to live in sub-standard housing and on the streets in Rockford, Madison and Janesville. Prior to connecting with Porchlight, he had been homeless for five months.

There is a misconception that all homeless people are panhandlers, or are annoying or dangerous, Terry said.

“But there are people like me who don’t know how to become sober,” he said. “I knew I had to do it, I tried to do it, but I did not know how.”

Working closely with a physician and therapist, as well as having what he called “a safe, private place” to live at Porchlight have helped him, he said. Terry now volunteers for a number of local organizations. He plans to sing in the concert and said he’s excited to see the Orpheum Theatre.

He is slowly saving money each month for his “bucket list goal” — a cross-country tour on an Amtrak train. Having goals, helping others and participating in the community are things he thought were over for him, Terry said.

“Now I enjoy life again and I also have a perspective on life,” he said.

Cost: Free but donations for Porchlight are requested.

Andrew Rosin, age 38, passed away Feb. 11, 2020, at the Agrace Inpatient Unit in Fitchburg due to complications of metastatic colon cancer. Ou…

Madison Metropolitan School District officials are examining how to make a "best practice" of staff not using student bathrooms work in older buildings after a transgender staff member wrote an open letter claiming such a practice has a transphobic effect.

Austin Carl will not have the influential neighborhood association's support at a Feb. 19 alcohol license hearing.

A Racine man who was paralyzed after a Caledonia crash in 2015 was awarded a $38.1 million verdict by 12 Racine County jurors Wednesday, after they agreed that the seat in the man's 2013 Hyundai Elantra caused the bulk of his injuries.

A judge reversed course Monday, reinstating charges against a former LakeView Technology Academy teacher who admitted showing a student a photograph of a partially nude man the teacher was dating.

WISC (Channel 3) and WMSN (Channel 47) are among 987 stations nationwide required to adopt new frequencies as part of a Federal Communications Commission effort known as the “repack.”

WAUNAKEE — Jenifer Neumaier, age 34, was welcomed into heaven with open arms on Monday, Feb. 10, 2020, after a three-year battle with cancer a…

The Hub II has come under scrutiny from a neighborhood steering committee.

Janesville police are investigating the shooting deaths of two women as a double homicide.

Musician Ken Lonnquist accompanies Jessica Pastelin, director of development at Porchlight, left, and John Terry, a Porchlight resident, in a song as performers and organizers of The People's Chorus gather for a portrait.