The attire was out of character for Robert Gehrenbeck.

It included winter boots, ski pants, gloves and a set of Shure headphones over his North Face stocking cap.

Of course, he’s also never directed a choir standing on scaffolding on the top deck of a parking garage on a cold December day.

And normally, his choir members are just a few feet away on risers, not yards away cocooned in their Toyotas, Hondas, Pontiacs and BMWs listening to Gehrenbeck’s directions over their car radios.

“The main thing I want to stress is that we’re so grateful to be able to sing together at all,” Gehrenbeck said during a short break from a pre-concert warm-up. “This has been a great substitute. It’s great to be able to make music again as a group.”

Concert etiquette was drastically revised Saturday as the 40-member Wisconsin Chamber Choir put on a socially distanced concert that did away with an in-person audience. Instead the choir used wireless microphones, a run of cables, the internet and a moving van filled with computers and a mixing board to stream the 1 hour and 14 minute Car Carols concert to viewers way beyond a typical Madison concert hall.

The COVID-19 pandemic is to blame for the unusual, creative setup, but the parking structure at American Family Insurance took on a festive feel. Choir members decorated their vehicles with snowflakes, presents, stuffed animals, ornaments and garland. A fresh falling of snow that cleared just before the first number added to the holiday spirit as the choir took singing in a car to a new level.

“You have to really be aware of your posture and take in extra considerations on how you’re using your breath,” said Rachel Wood, the dash of her Toyota Corolla lined with white Christmas lights. “This is a bright spot in a difficult year.”

A few cars away, Franzo Law II, a tenor from Madison, had brought along a number of ornaments, a wreath and nutcrackers to adorn his 2008 Mazda Miata.

“It’s small and cozy and doesn’t take too much heat to keep it warm,” said Law, who has been with the choir since 2015. “I’m hoping we’ll set an example for how you can make something out of nothing. How can you triumph and do something with whatever you have.”

The Wisconsin Chamber Choir was founded in 1998 and is composed of volunteer singers with a paid director and accompanist. The choir typically gives three concerts each season but will do two this season, its next scheduled for May, and likely in the same format as Saturday’s concert. The WCC’s last performance was in February, prior to crowd limitations, at the First Unitarian Society, but outdoor rehearsals began in small, socially distanced groups wearing special singing masks in September. The choir then came together for a series of car rehearsals in the parking lot of Madison Christian Community Church on Old Sauk Road.

Gehrenbeck said a surplus in the choir’s finances will help it weather the season with no revenue from ticket sales, but they’re also not paying to print programs or rent concert venues. However, they did need to invest in equipment to pull off Car Carols. Donations are being encouraged.

“We’re being prudent,” said Gehrenbeck, who teaches music at UW-Whitewater and has been the director of WCC since 2008. “We’ve certainly never had a season like this.”

Musically, Saturday’s concert sounded much like any other performance and included works from African American composers. Songs included “Silent Night,” “Ave Maria,” “Hail Mary” and “He Is.” The a cappella concert also included recorded accompaniment from Alison Read, Gehrenbeck’s sister-in-law in Dallas, Texas, and Grace Rosholt, a high school violinist whose parents, Bill Rosholt and Ann Baltes, sing in the choir. At its peak, 450 people from as far away as Germany watched the concert live on Facebook. By Saturday night, the YouTube version of the concert had close to 1,000 views, said Sherri Hansen, a member of the choir who tracked the online activity.

But one of the biggest jobs of the production was figuring out the technical aspects. American Family Insurance not only offered up the parking garage but also ran an ethernet cable to the site that allowed the concert to be streamed to Facebook and YouTube. But getting the voices of singers to a mixing board and having them hear each other took a little creative thinking.

Joshua Schmidt, an elementary music teacher in Sun Prairie, normally just concerns himself with singing but also has a background in electronics and technology. He was tabbed to gather up wireless, handheld microphones and had to create a monitor system using a low-powered transmitter (similar to those used in neighborhood light displays) that could send sound to the radios of choir members so they could hear each other without a delay. However, in some newer vehicles, computer processing of radios creates too much of a delay, so at least three members were given portable radios that they could tune to 87.9 FM.

“Singers can handle about a 30-millisecond delay before it starts affecting our ability to sing. It’s just how fast the human ear can process information,” said Schmidt, who sang Saturday from his electric blue Chevy Volt. “We were worried that from the microphones to the mixer and the mixer to the FM transmitter (to the car radios) that it would cause a delay but it works really well.”

The choir was also split into two groups that took turns singing because the mixing board had only 20 channels. But the acoustics in a car are relatively dead when compared to a church or other music venue. That’s why Schmidt, a Lake Geneva native, UW-Oskosh graduate and a member of the choir since 2017, added reverb so that the singing sounds more authentic and like it’s coming from a concert hall.

“Our biggest worry used to be getting on and off the risers,” Schmidt said. “Now we realize how silly that it is because that’s so much more simple than this. It’s amazing how our perspective has shifted.”

The WCC is one of the few choirs in the country that has taken up the task in this way. But a concert wasn’t the initial goal. The idea was to bring members back together so they could sing. Once they began experimenting with equipment, setups and the configuration of cars in a parking lot, Schmidt, Gehrenbeck and the choir members began to feel confident they could pull off a live performance.

“We knew we had to do something for our choir. We were missing it a lot,” said soprano Andi Becerra, president of the choir’s board of directors, whose car was decorated with ropes of garland. “It’s a little bit harder to sing in the car, but it’s worth it to be able to sing with people.”

COVID-19 is limiting the number of guests each night but this year nearly 2 million lights are part of the growing displays at Rotary Botanical Gardens.

Against odds, a worldly culinary niche ditches the burgers and dogs in downtown Watertown

Located in a former drive-in known for soft serve and deep-fried hot dogs, Moon Rabbit serves up a menu that can include brisket, shrimp beignets, catfish, Indonesian noodles and shawarma.

Photos: 2020 in pictures from the On Wisconsin column

Here are some of the images captured in 2020 for Barry Adams' On Wisconsin column.

The bar and fixtures from Wittnebel's Tavern in Old Ashippun were donated in 2017 to the Wisconsin Historical Society, but now the building itself will be moved so it can be a part of a new Brewing Experience feature at the 600-acre state historic site near Eagle.

Beer and soda bottles, Noxzema glass and the Blessed Mother getting new life in rural Wisconsin

An $850,000 project is designed to transform the grounds of the Our Lady of Guadalupe Shrine in Endeavor, constructed in 1964 as a school and church for migrant workers.

Single digits, little wind make for a near perfect day for outdoor curling despite the slow ice

A 16-team bonspiel at Winnequah Park in Monona draws curlers from throughout the state and provides an opportunity to rekindle the game and camaraderie amid the pandemic. 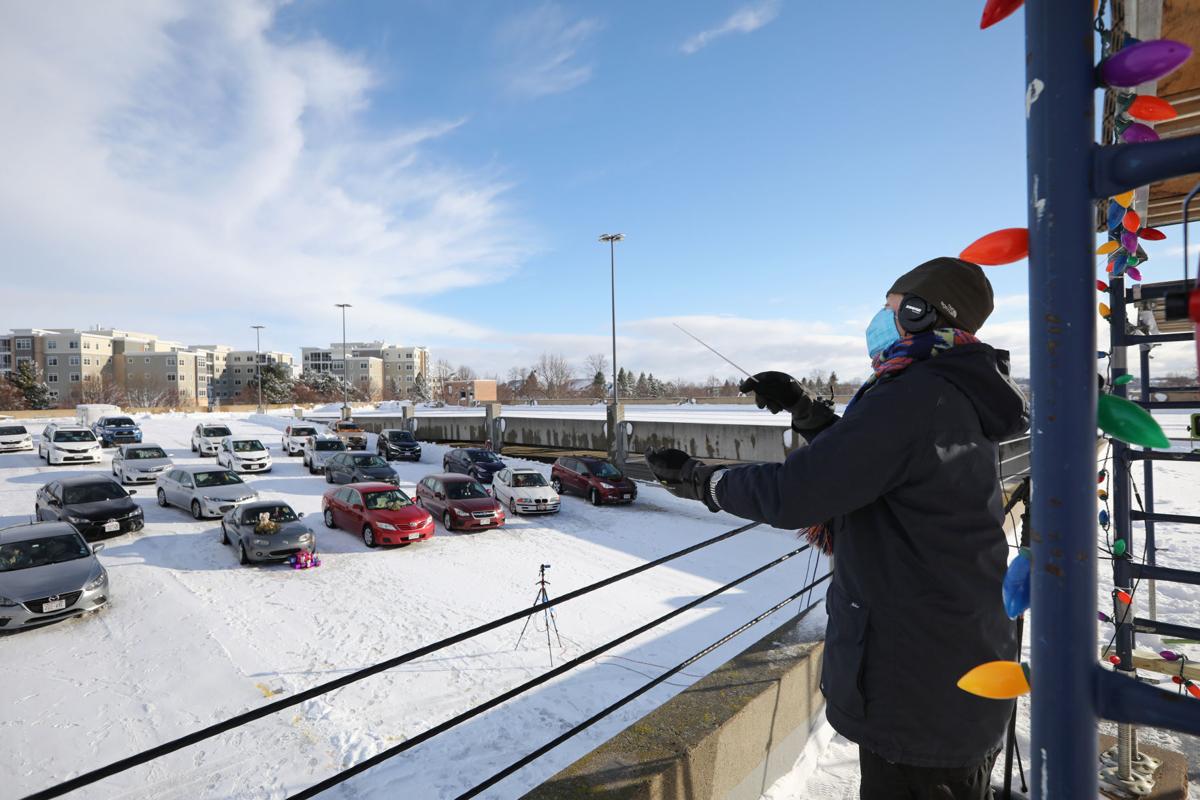 Robert Gehrenbeck, director of the Wisconsin Chamber Choir since 2008, was decked out in his winter gear Saturday as he conducted Car Carols, a socially distanced holiday concert on the top level of a parking garage at American Family Insurance. The performance, the choir's first since February, was streamed live on Facebook and can also be viewed on YouTube. 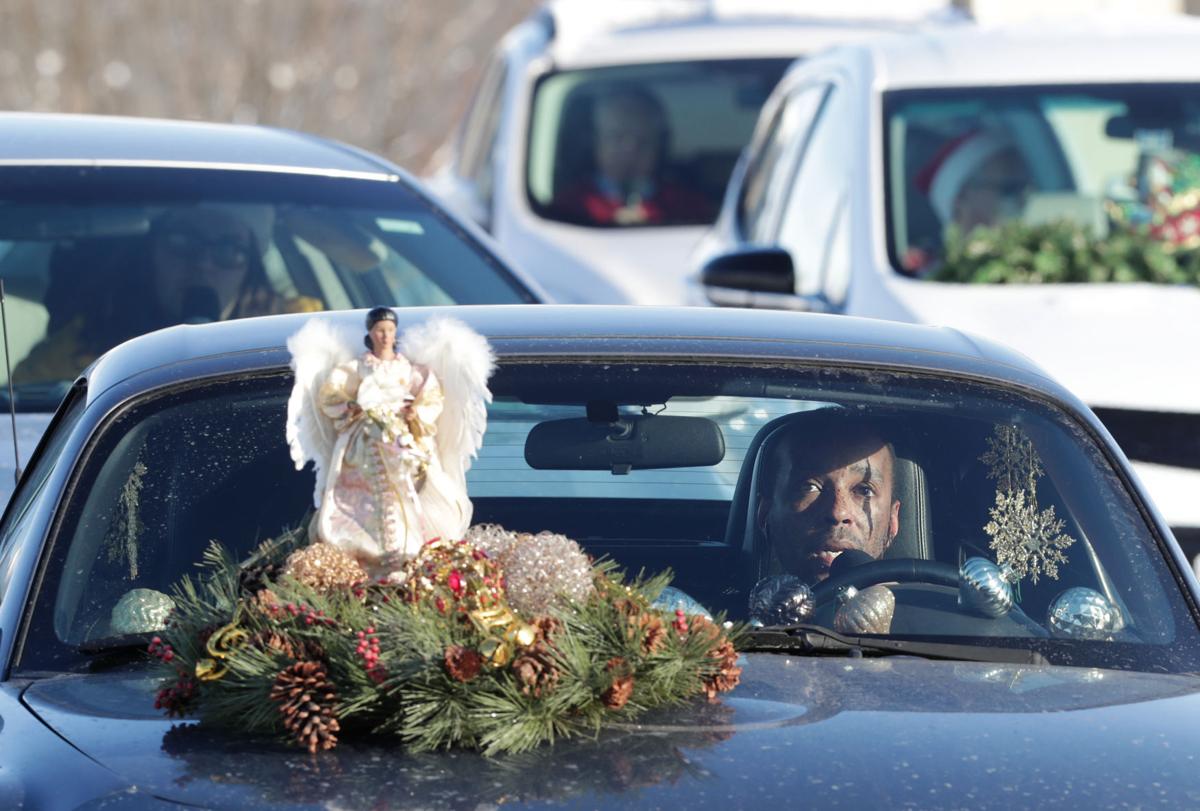 Franzo Law II, of Madison, sings tenor with the Wisconsin Chamber Choir during its Car Carols concert. Decorations were common on vehicles to help add to the holiday spirit. 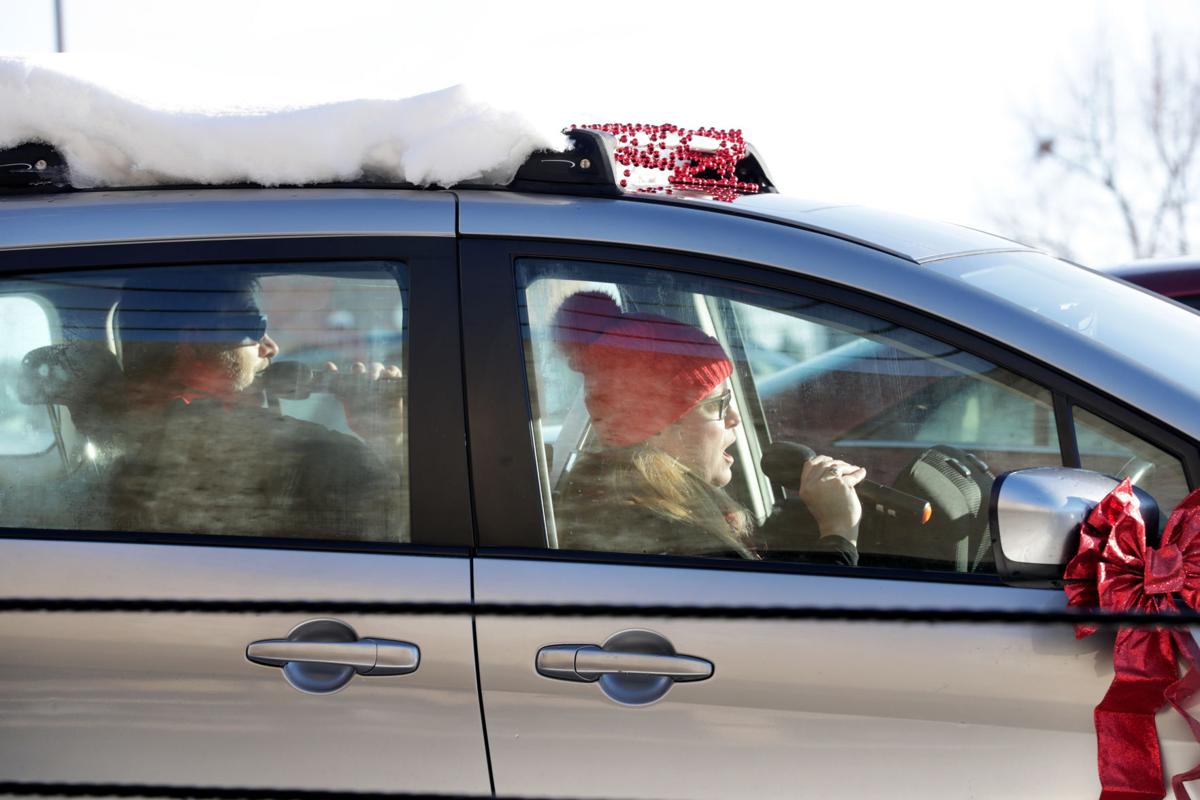 Ann Baltes, right, of Middleton, and her husband, Bill Rosholt, use wireless microphones to sing from their car during the Wisconsin Chamber Choir's Car Carols concert. Their daughter, Grace Rosholt, a high school violinist, added recorded accompaniment on some of the numbers. 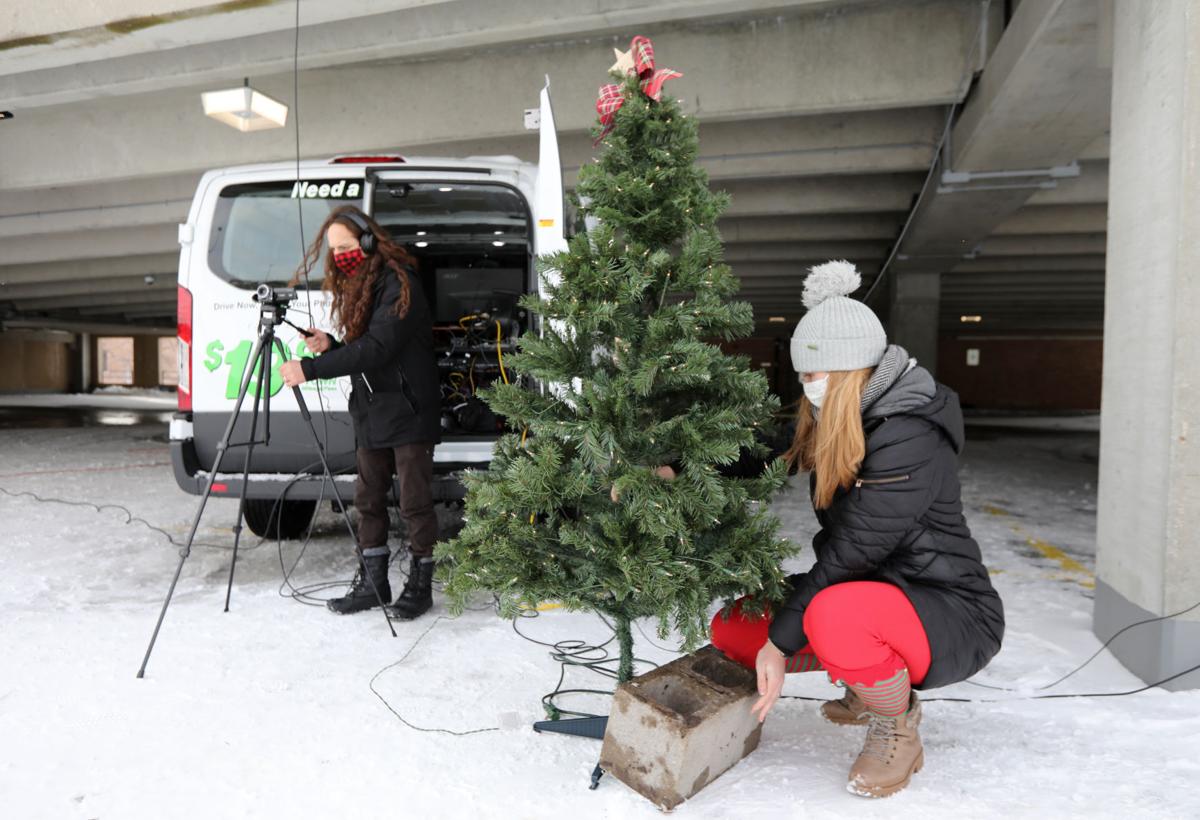 Caitlin Schmidt, right, sets up a Christmas tree while her husband, Joshua, readies a camera in preparation for Saturday's concert by the Wisconsin Chamber Choir. The Schmidts are both members of the choir, and Joshua also organized most of the technical aspects of the concert. 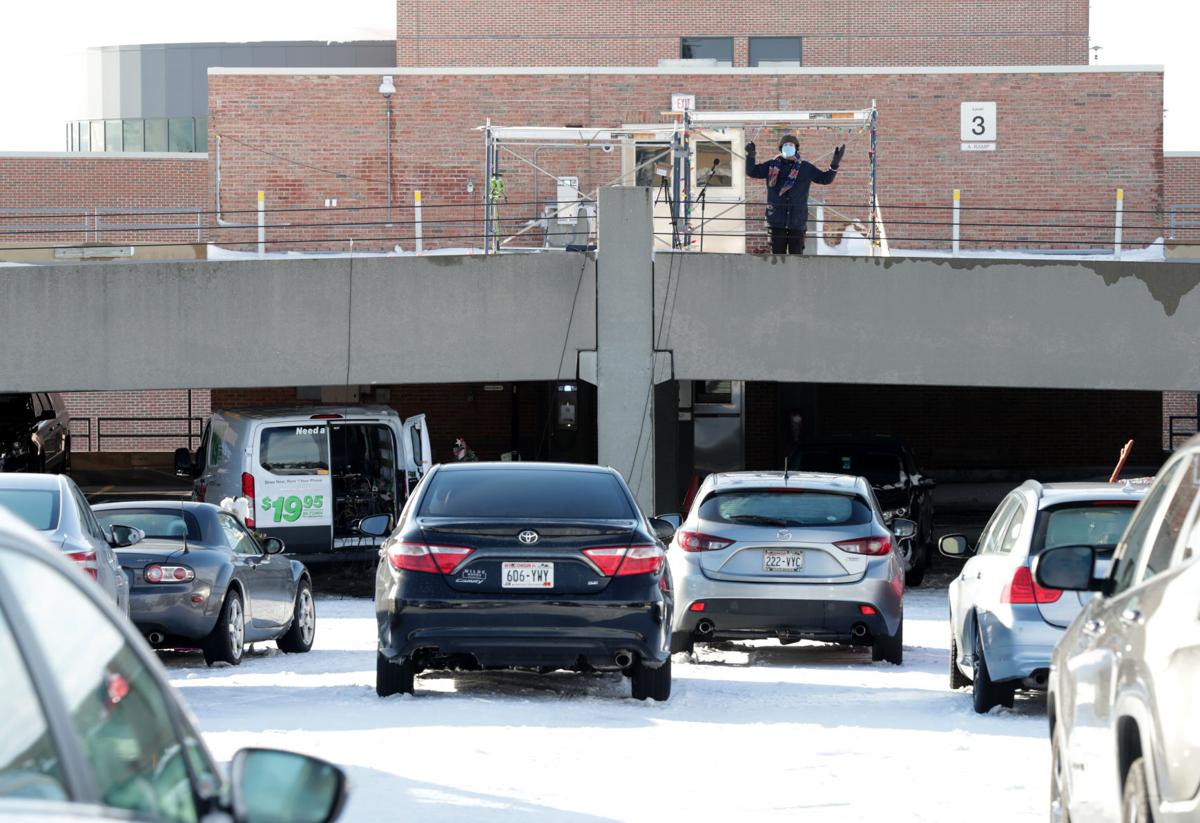 Robert Gehrenbeck stands on the top deck of a parking garage to conduct members of the Wisconsin Chamber Choir. Members used their car radios to hear each other and verbal instructions from Gehrenbeck as a low-power transmitter was connected to the sound system. 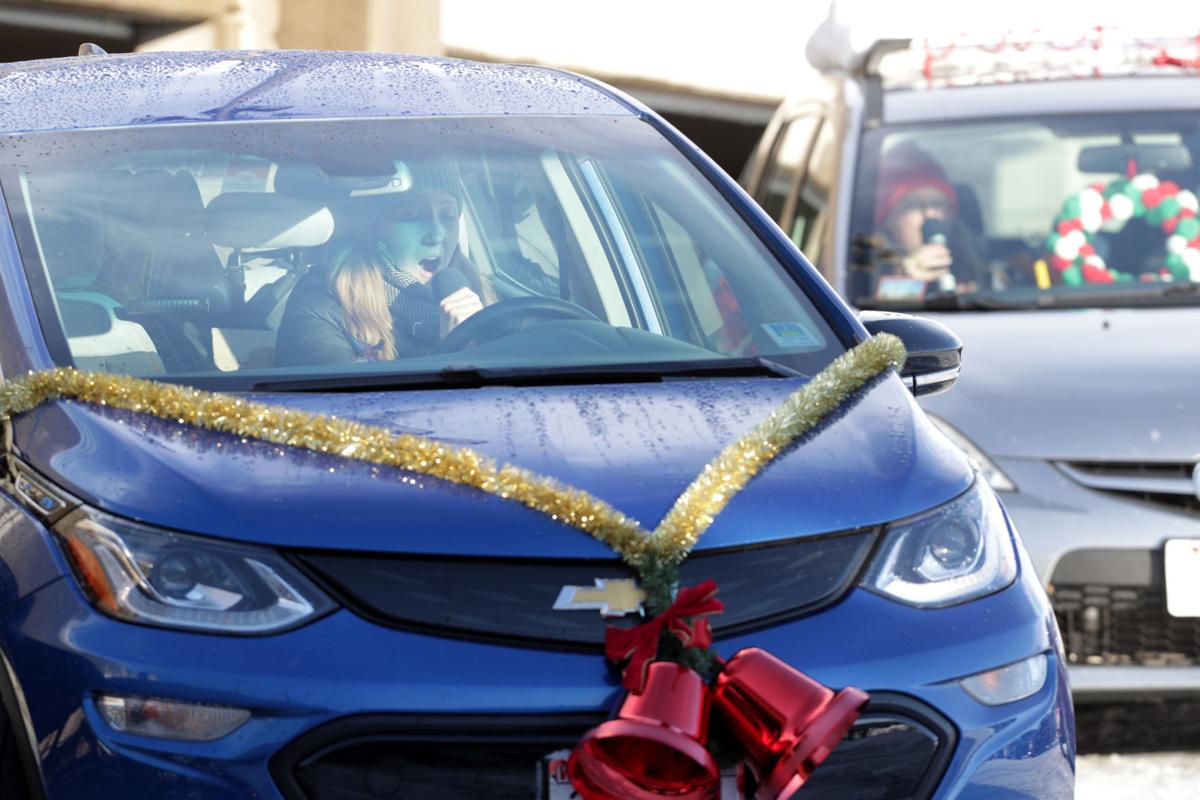 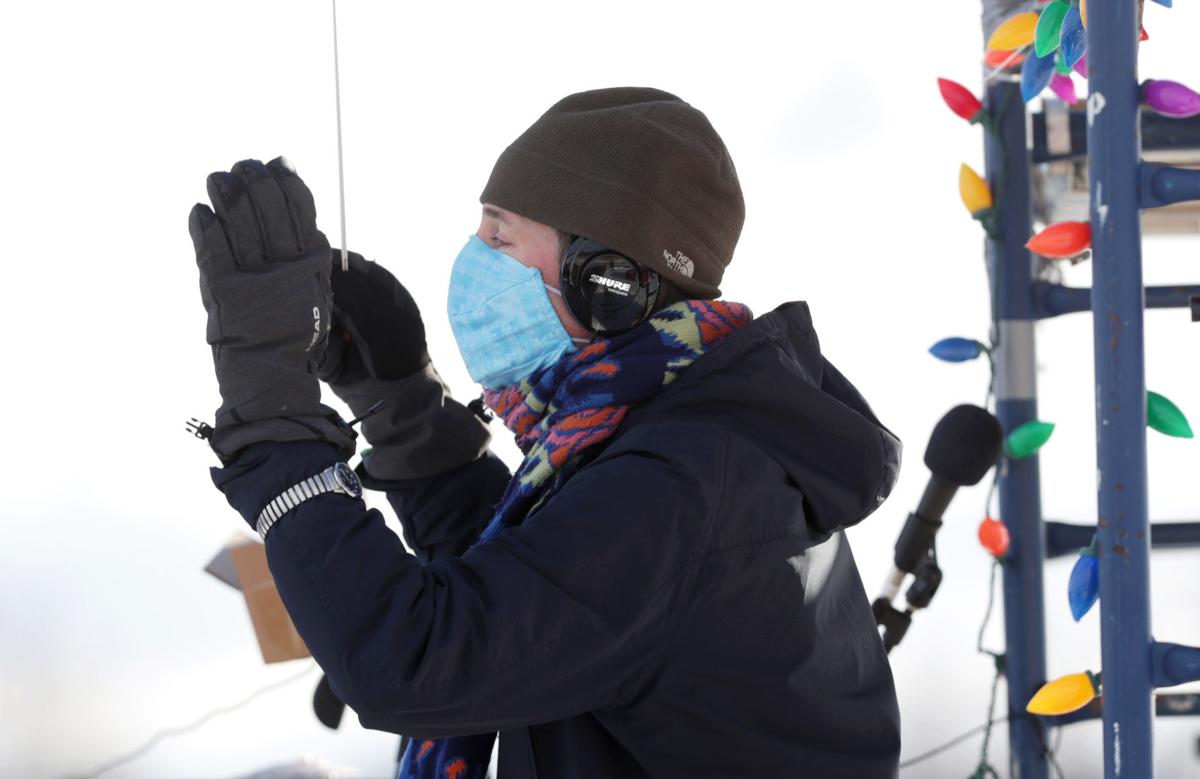