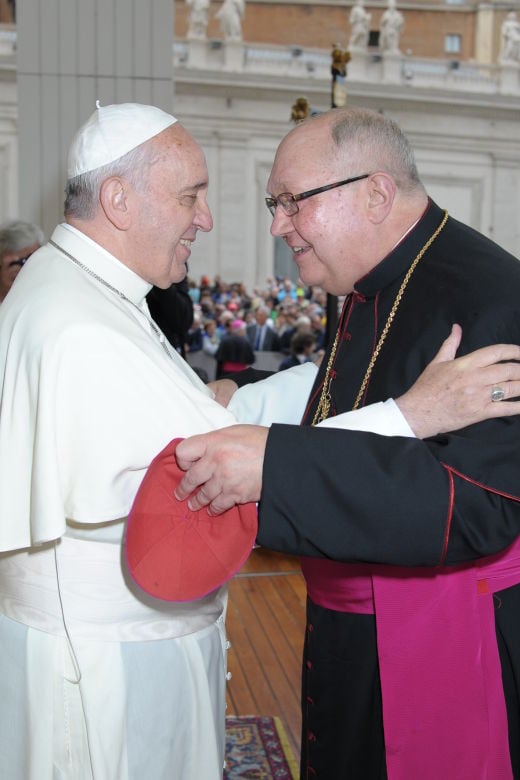 Madison Catholic Bishop Robert Morlino, right, meets Pope Francis for the first time Oct. 9, 2013, in St. Peter's Square at the Vatican. "I was overwhelmed by the genuine human warmth that he exuded -- a warmth which was at the same time deeply spiritual," Morlino said. 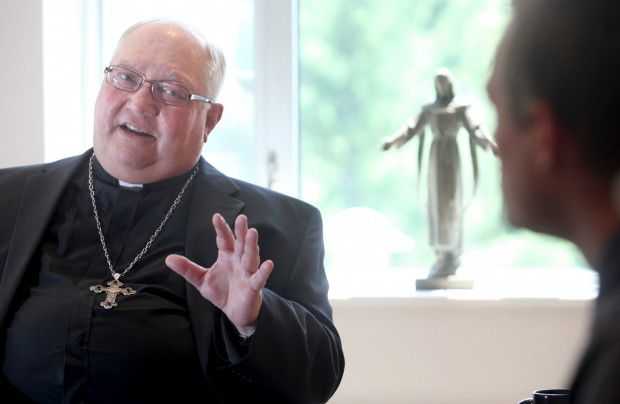 "This pope uniquely challenges, especially bishops and priests, to grow in holiness," said Madison Bishop Robert Morlino, pictured at a staff meeting last July. "Have I changed more in what I try to do to be holier? Yes, I have changed in that regard." 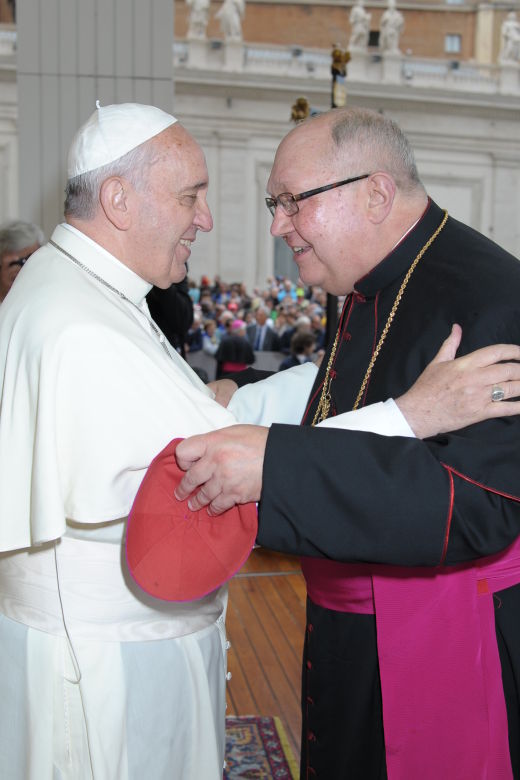 Madison Catholic Bishop Robert Morlino, a staunch traditionalist with a national reputation for vigorously opposing abortion and same-sex unions, said he and Pope Francis are in sync and that the new pontiff has made him a stronger culture warrior.

In a lengthy interview with the State Journal, Morlino praised the first year of the pope’s reign, which has received widespread raves from Catholics for what is perceived as a new tone and style, and greater compassion for the marginalized.

Yet Morlino cautioned that reporters and people with agendas have “outrageously misinterpreted” some of the pontiff’s comments, and he said Pope Francis actually is causing him to speak out even more forcefully on the church’s opposition to abortion, artificial contraception, stem cell research and homosexual acts.

In explaining how he came to that conclusion, even though Pope Francis has called for a “new balance” when talking about hot-button issues, Morlino said Pope Francis is all about getting people to meet Jesus Christ. But it must be “the whole Christ,” Morlino said, and that leads him back to assessing what aspects of Christ’s work need the most attention in this diocese.

“That’s the judgment a bishop has to make,” Morlino said. “So I have to see kind of which aspects of the truth of Christ need work here, and when I see that, I kind of end up right back where I was. I have to speak up forcibly about these issues. But I have never failed to teach also about God’s mercy.”

As to whether Pope Francis has made him a stronger culture warrior, Morlino embraced the label and responded enthusiastically, “Yes. Oh, yeah.”

While noting that he and Pope Francis differ in style, Morlino said he has “not substantially” changed his leadership approach because of the new pope, and that he’s confident he has the Vatican’s full support.

“There are people I ask who are close to the pope, ‘Am I on the wrong track?’ Because I want to know,” Morlino said. “And they say, ‘Not at all.’ ”

Pope Francis will mark the one-year anniversary of his election Thursday. Initial media coverage focused on his history of aiding the poor, his desire to spread the faith, and his historic turn as the first pope from the Americas.

As the months went by, Pope Francis began making waves with his public statements. Though the pope has not changed church doctrine, many found in his comments fresh sensitivity toward difficult societal issues. Time magazine named him “Person of the Year.” He landed on the cover of Rolling Stone.

“What I most admire about him — and it’s really God’s gift to him — is his presence to people,” Morlino said, adding that the pope’s “unbelievably uncanny knack” for connecting with people has been a joy to watch and just what the church needed.

“Pope John Paul (II) was incredible in this regard. Francis is, you know, every bit as good,” Morlino said. “And that’s a gift we need, because, as (Pope Francis) has always said, he’s interested in people at the peripheries. He’s the one who can draw people in from the peripheries in an absolutely unique way.”

If this approach has a downside, it is that the media can more easily misinterpret things the pope says off the cuff, which is unfortunate but not the pope’s fault, Morlino said.

“(Pope Francis) is more interested in bringing (an individual) to Christ than in watching every word,” Morlino said. “If you’re going to bring someone to Christ, and you’re going to take them where they’re at, you can’t watch every word, because then that connection won’t happen.”

That is how the two differ in style, Morlino said. Pope Francis “doesn’t think of himself primarily as a teacher” and is “more charismatic,” Morlino said. Morlino describes himself as more the teaching sort, which he said brings with it a certain cautiousness in public statements.

“I am, by temperament, much more thoughtful about the exact words I use when I’m speaking publicly,” Morlino said. “That causes me sometimes to connect less effectively than he does, and I guess I have to live with that.”

In July, aboard the papal airplane, Pope Francis was asked about the sexual orientation of priests. “If someone is gay and he searches for the Lord and has good will, who am I to judge?” he answered.

Some have interpreted the remark as the pope saying a person’s sexual orientation should be a matter only between that person and his or her God. Morlino considers the episode an example of the media’s missteps, with the comment being “outrageously misinterpreted,” he said.

In Catholicism, “good will” — the two-word version — has a specific definition meaning “the will to obey the teaching of the church and natural law that comes from our humanity,” Morlino said. The church teaches that homosexual behavior is a sin, though a homosexual orientation is not.

The episode illustrates how people can twist words to their own agendas, Morlino suggested. Catholic traditionalists have long felt a similar way about the Second Vatican Council in the 1960s, accusing progressive Catholics of misinterpreting its reforms to dilute Catholic teaching. Morlino referenced Vatican II in suggesting the media’s image of Pope Francis may be distorted.

“The mass media are trying to create a spirit of Pope Francis, just as they created a spirit of Vatican II,” he said. “Many Catholics fell for that the first time. I hope they won’t fall for that again.”

On Wednesday, in an Italian newspaper article published after the Morlino interview, Pope Francis reaffirmed that “matrimony is between a man and a woman.” However, he said the church might be able to tolerate “diverse situations of cohabitation” as a practical measure to ensure property rights and health care.

Ten years into leading the Madison diocese, Morlino is beloved among those Catholics seeking a stalwart defender of church doctrine. Others complain he lacks compassion and is too much the scold.

For Morlino’s critics, the new pope’s frequent references to wanting “pastoral” priests and bishops — as opposed to administrative or bureaucratic ones — excites them, and they smell blood. Morlino suggested they’re off base. His approach, he said, is already primarily pastoral.

“What is pastoral has to be true,” he said. “In other words, pastoral is loving. It includes love, and loving always includes respecting. If you don’t respect people enough to tell them the truth, well then, you couldn’t be pastoral.”

To tell people only what they want to hear is not pastoral, Morlino said.

Pope Francis also has stressed reaching out to everyone, saying the church’s doors “should always be open.” It’s another area where Morlino’s critics say his approach is at odds with the pope’s.

In 2011, Morlino said the popular Catholic hymn “All Are Welcome” is not appropriate for use during Mass, arguing that only people who follow God’s will as spelled out by the Catholic Church are truly welcome. Asked about this today, Morlino called it a “particularly difficult” issue, but he did not back off his stance and provided new insight into his reasoning.

In some parishes, singing the hymn had become “code for political correctness,” Morlino said.

“When people sing ‘All Are Welcome,’ frequently it’s political, in fact,” he said. “There’s a sense that all are welcome, but I would submit that means, in fact, political liberals are especially welcome. And when a congregation is singing that song and meaning it like that, I don’t think that’s healthy for their salvation.”

When some parishioners sang the hymn, they really meant, “Let’s have same-sex unions, let’s have a contraceptive culture, let’s have abortions,” Morlino said. It would be “irrational” to put out a welcome mat for people who want to destroy the foundation of the church, he said.

Several times during the interview, Morlino referenced differences he said he’s come to understand between the Catholic cultures in the United States and in Argentina, the pope’s home country. Argentina does not seem to have groups of dissenting Catholics, an ordinary part of life in this country, he said.

That means the pope can focus more on speaking to “bread-and-butter” issues, such as helping the poor, Morlino said.

As a bishop in Buenos Aires, “(the pope) wasn’t dealing so much, as I understand it, with doctrinal dissent, and, of course, that would make a big difference for how one does things in the United States versus how one would do things in Argentina,” he said.

While the pope is the pastor of the whole church, each bishop needs to “tailor” his work toward his own diocese, Morlino said.

“I’d like to think that if (Pope Francis) were here, he might have a more charismatic approach, but he’d be doing pretty much the same thing,” Morlino said.

The following is the full transcript from an interview with Madison Catholic Bishop Robert Morlino on Feb. 27, 2014, at the Bishop O'Connor Ce…

Catholic Bishop Robert Morlino has found himself at the center of numerous controversies and dust-ups in the past decade.

Madison Catholic Bishop Robert Morlino, right, meets Pope Francis for the first time Oct. 9, 2013, in St. Peter's Square at the Vatican. "I was overwhelmed by the genuine human warmth that he exuded -- a warmth which was at the same time deeply spiritual," Morlino said.

"This pope uniquely challenges, especially bishops and priests, to grow in holiness," said Madison Bishop Robert Morlino, pictured at a staff meeting last July. "Have I changed more in what I try to do to be holier? Yes, I have changed in that regard."