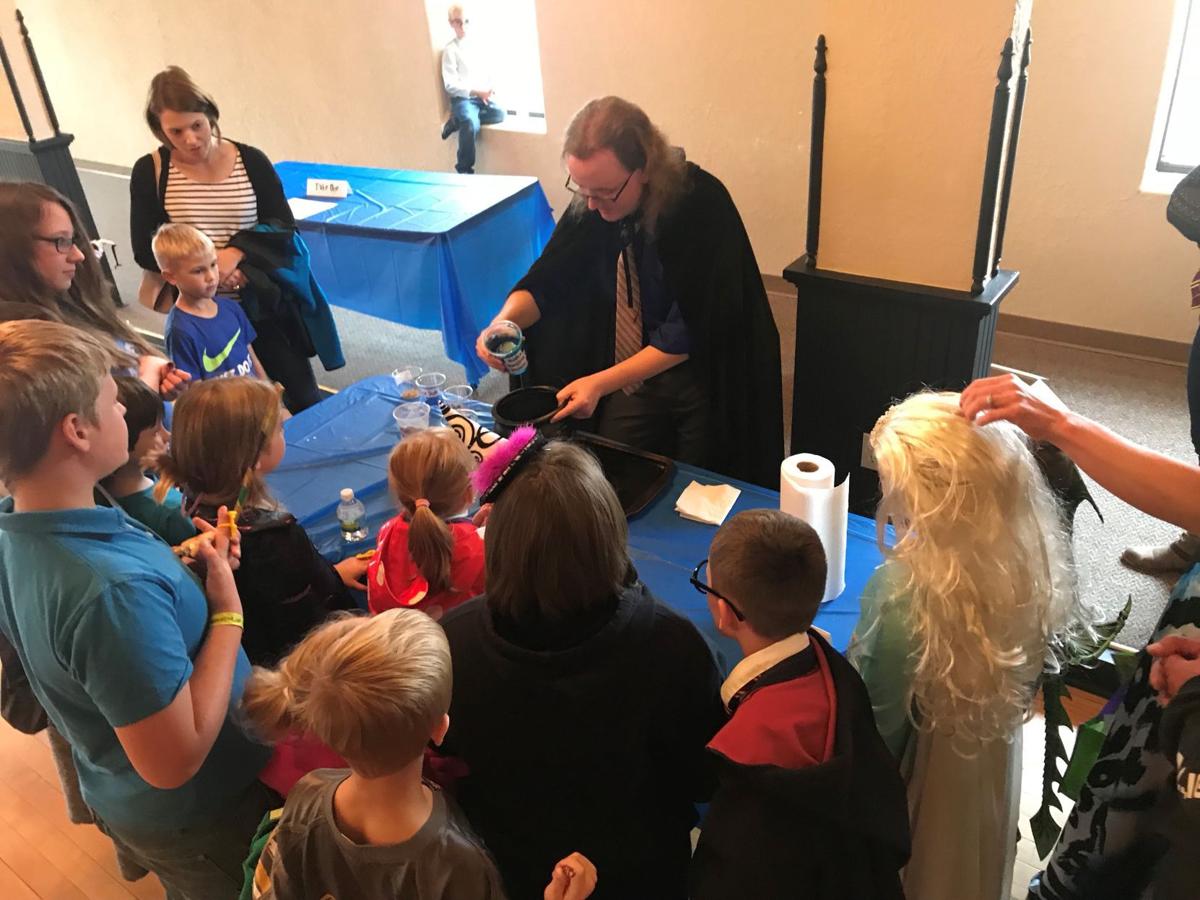 Children gather around a table at Fort Community Credit Union to watch the creation of potions. The free exhibit was held in conjunction with the Harry Potter Festival in Jefferson over the weekend. 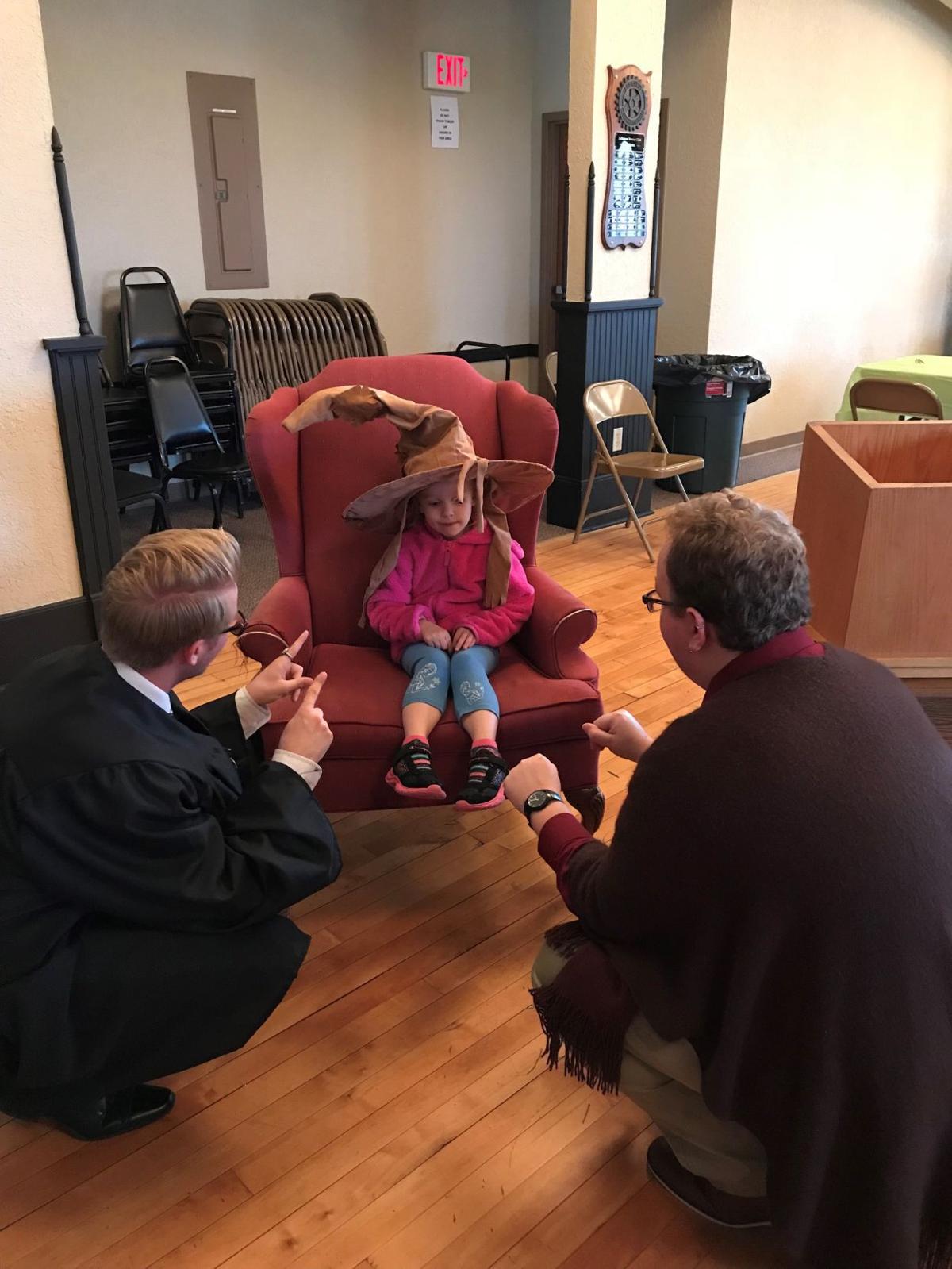 Jennifer Reynolds, 5, of Fort Atkinson, patiently waits as she wears a sorting hat to determine which house of Hogwarts she is best suited at a free event at Fort Community Credit Union in Jefferson. Jennifer was with with her family that visited Jefferson over the weekend for the Harry Potter Festival. 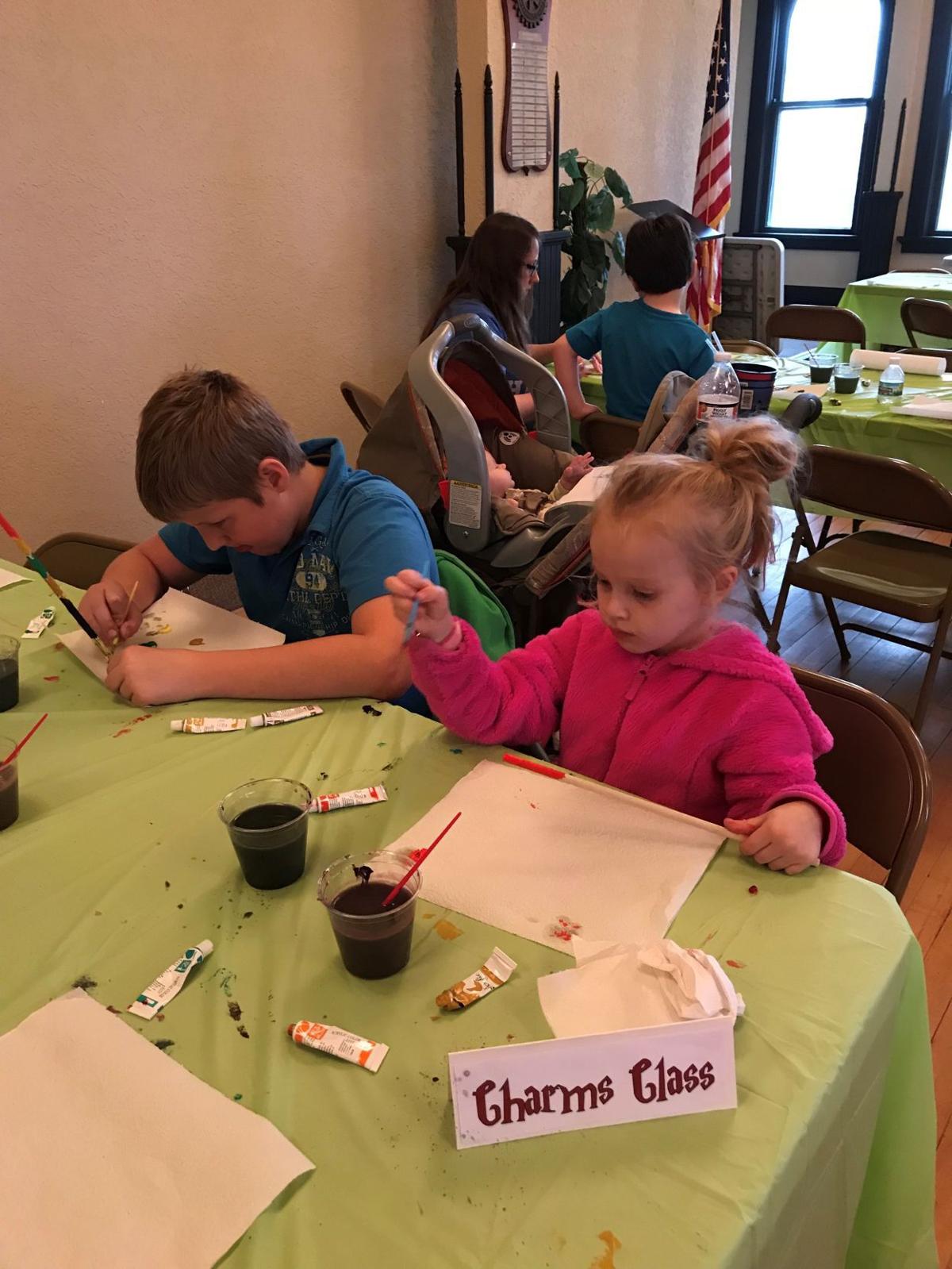 Joshua Reynolds, 11, left, and his sister, Jennifer Reynolds, 5, of Fort Atkinson, work on painting wands at Fort Community Credit Union in Jefferson during the Harry Potter Festival over the weekend. 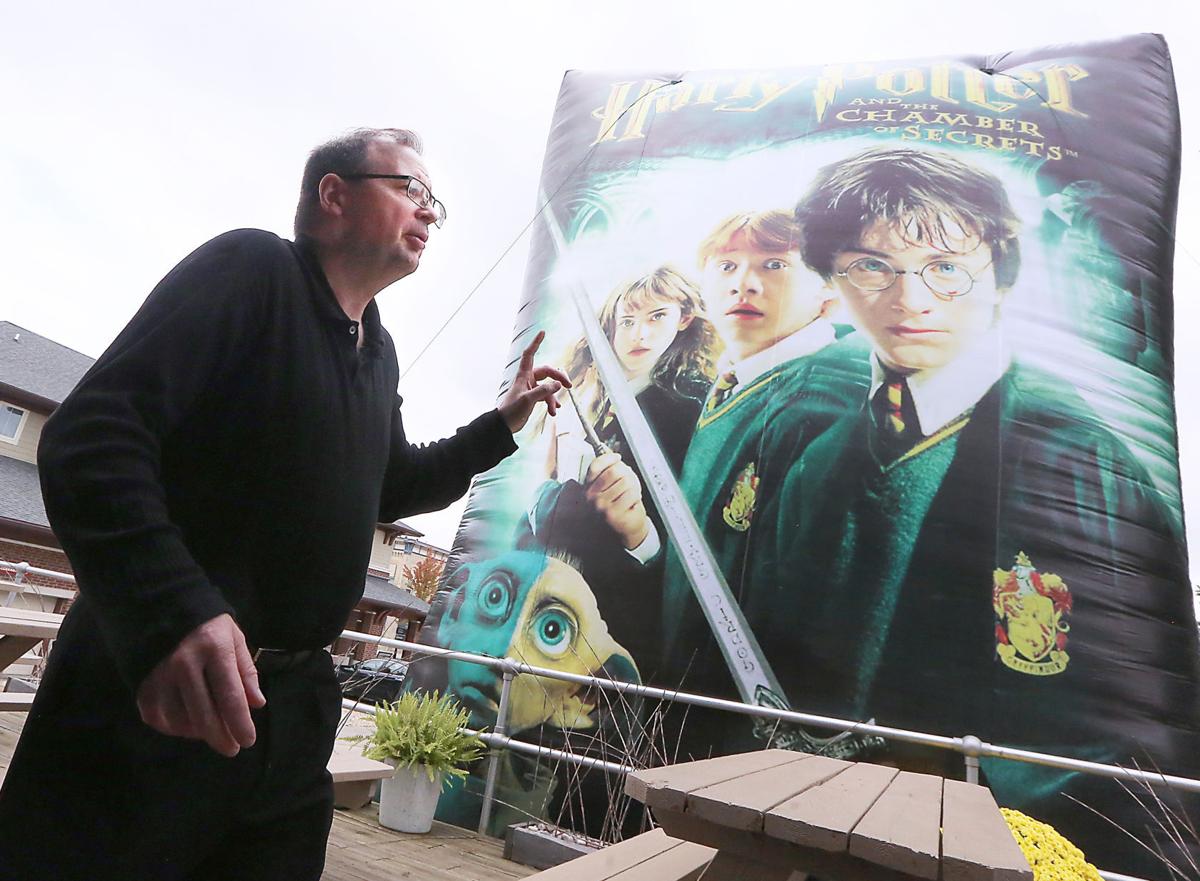 Scott Cramer, one of the organizers of the Harry Potter Festival in Jefferson, at last year's event in Edgerton, where it was held for two years before moving to Jefferson this year.

The Harry Potter Festival in Jefferson drew huge crowds to the city over the weekend, but the event that pays homage to all things Hogwarts was plagued by long lines, transportation problems and a lack of adequate staffing, according to city officials, organizers and many of those who attended the three-day event.

The city’s fire and police departments estimated Monday that nearly 50,000 people attended the festival, including more than 35,000 on Saturday when the weather provided near-perfect conditions. The event was held at venues throughout the city, including downtown and Jefferson County Fair Park.

Scott Cramer, who moved the festival to Jefferson this year after two years in Edgerton, said the crowd was about 10,000 to 15,000 more than expected and said problems with a staffing agency left him with too few workers to run the event.

He estimated that 25 percent to 30 percent of visitors stayed in public areas or managed to get in without buying wristbands ($25 for adults, $15 for children), while there was confusion over routes and too few shuttle buses for the crowds. He also said he plans to hire more professional actors instead of those with no acting experience who played the roles of characters from the book series.

“Obviously, the system was taxed,” said Cramer, who runs the event with his brother, Rob. “Fans were very patient and understanding.”

But not all, many of whom left stinging rebukes on the festival’s Facebook page.

Rebecca Smith Thom drove from her home in Pine River, west of Oshkosh, with her husband and 10-year-old son after spending $73.50 on wristbands she purchased through the festival’s website. They parked at the fairgrounds and stood in line for the sorting hat at the nearby Masonic Lodge, but after an hour in line they left and tried to take a shuttle bus downtown. They stood in line for a bus for an hour before her husband walked back to the fairgrounds for the car.

“I envy those who went without buying (wristbands),” Smith Thom, 45, said. “Sadly, I do not feel the attractions were worth the cost. The Wizard’s Prison was literally an empty tennis court when we got to it.”

Brooke Haycraft of Brodhead took her niece and nephew and said the prison consisted of black cloth over the tennis court fencing with one person inside welcoming visitors. The Mandrake greenhouse at River’s Edge Meat Market had one character dressed as a professor accompanied by two plants. Besides wristbands, Haycraft said she also spent $60 on tickets for a character breakfast with a buffet of eggs and sausage and other breakfast items, but there were only a few characters in costume.

“Hagrid ate breakfast without his wig and played on his phone the whole time and did not get up once for pictures,” Haycraft said. “There’s just so many problems to fix. I think it was a combination of too many people and not enough organization.”

Lee Reynolds, 32, with his wife and four children, spent over $100 on wristbands. They never made it into the fairgrounds because of the crowds and ended up walking downtown because of the lines for the shuttle buses. On Saturday they attended only one exhibit that required a wristband. Reynolds said they loved the Lego displays but were disappointed with the prison and the live wizard’s chess, which didn’t have enough room for all of the human chess pieces.

They were most impressed by free exhibits at the Jefferson Public Library and at a free station at a downtown credit union where his children painted wands and were sorted into one of the four houses of Hogwarts. After visiting a “dragon slayer tunnel” on Sunday, only to discover the dragon was “an inflatable like you would see at Menards,” he asked for his money back but was denied by festival organizers.

“We hyped this up with our kids because (festival organizers) hyped it up,” Reynolds said. “They hyped it up but didn’t deliver.”

City officials say they plan to meet with the Cramers this week about plans for next year’s event but say they were pleased with the turnout. The city pledged $25,000 for logistical support and $25,000 to market the event with the understanding that, if the festival was a success, the city would be reimbursed.

Cramer said Monday that the festival made a profit, that marketing costs were less than $10,000 and that the city would be reimbursed for the marketing expenses. He said he hoped to have an agreement with the city for next year’s festival by the end of the year.

“It exceeded expectations from the city’s perspective,” said Tim Freitag, the city’s administrator. “It did tax the system, lines got longer and it did cause a few problems, but those are probably correctable in the future.”

The festival began with a lighted parade on Friday night followed on Saturday and Sunday with food stands, wizard-themed clothing and other merchandise from vendors, Lego displays, and Harry Potter movies at the Highway 18 Drive-in Theater both Friday and Saturday night. The attractions also included familiar things from Harry Potter books like live wizard’s chess and the wizard’s prison at Riverfront Park, a sorting hat experience at the Masonic Temple and a Mandrake greenhouse, based on the screeching plant whose roots are used in the books to heal those who have been petrified.

Tiffany Lilly, 35, of Lake Mills, who attended the festival with her three children, two of her children’s friends and her husband, said the crowds were comparable to those she has seen at the Wizarding World of Harry Potter at Universal Studios in Orlando, Florida.

“It really felt like that kind of crowd, but at those parks things flow well and the lanes are huge and there’s a lot of workers around,” Lilly said. “We knew this wasn’t going to live up to that, but I didn’t think it would be like this. I was really disappointed.”

Jefferson Mayor Dale Oppermann said “it was an outstanding weekend” with “a terrific turnout” and that downtown businesses were “thrilled” with the influx of visitors. While the city will review this weekend’s event, Oppermann said he “absolutely” hopes to see the festival return.

“Based on what we experienced, any of our neighboring communities would jump at the opportunity to host this,” Oppermann said Monday. “But we’re going to look at all aspects of the festival and take into account people’s concerns.”

The magic of “Harry Potter” will be moving from Edgerton to Jefferson this fall.

EDGERTON — This weekend’s Harry Potter Festival in Edgerton was a reminder that “fan” is short for “fanatic.”

The second annual Harry Potter Festival in Edgerton is going to be much bigger than it was last year -- organizers have already sold 27,000 advanced tickets.

Madison Night Market to give November a shot

Fourteen teams face off on the first day of the Midwest regional quidditch championship at Breese Stevens Field.

The fixtures from Wittnebel's Tavern in Old Ashippun could be part of an interactive exhibit by the Wisconsin Historical Society after the family donated the items for posterity.

The festival has attracted more visitors than expected in each of the previous years, and last year about 50,000 people came to the city of 8,000.

Attendance at Warriors and Wizards Festival in Jefferson significantly lower than last year's Harry Potter Fesitval, vendors say; weather could be to blame

The National Weather Service said 30 mph sustained winds with gusts of about 40 mph and intermittent bursts of soft hail were found around Jefferson, which marred the experience for the attendees as they walked between vendor booth, fantasy- and science fiction-themed attractions and downtown shops.

Scott Cramer was charged with theft by fraud for knowingly issuing bad checks or providing credit cards with insufficient balances.

Children gather around a table at Fort Community Credit Union to watch the creation of potions. The free exhibit was held in conjunction with the Harry Potter Festival in Jefferson over the weekend.

Jennifer Reynolds, 5, of Fort Atkinson, patiently waits as she wears a sorting hat to determine which house of Hogwarts she is best suited at a free event at Fort Community Credit Union in Jefferson. Jennifer was with with her family that visited Jefferson over the weekend for the Harry Potter Festival.

Joshua Reynolds, 11, left, and his sister, Jennifer Reynolds, 5, of Fort Atkinson, work on painting wands at Fort Community Credit Union in Jefferson during the Harry Potter Festival over the weekend.

Scott Cramer, one of the organizers of the Harry Potter Festival in Jefferson, at last year's event in Edgerton, where it was held for two years before moving to Jefferson this year.