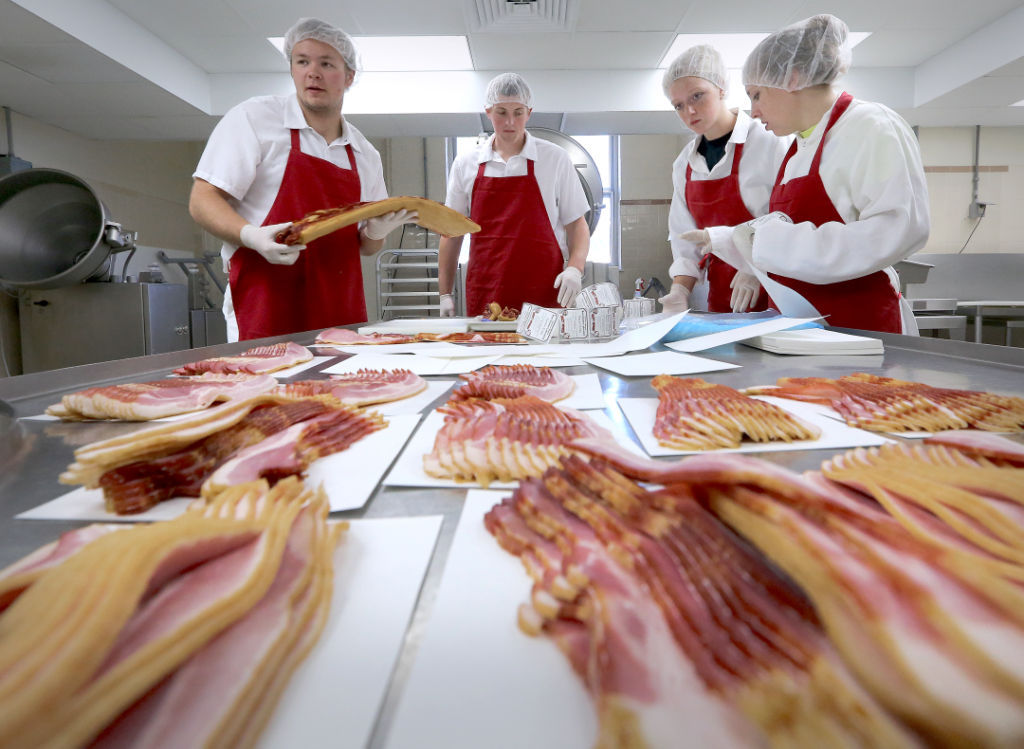 From left, UW-Madison students John Baynton, Tony Schmitz, Megan Jass and Katie Schultz slice and package bacon at Bucky's Butchery on Monday. The campus meat processing facility has a retail shop that is open from 11 a.m. to 3 p.m. on Fridays and bacon is one of the most popular items with about 30 pounds a week sold for $5 a pound. 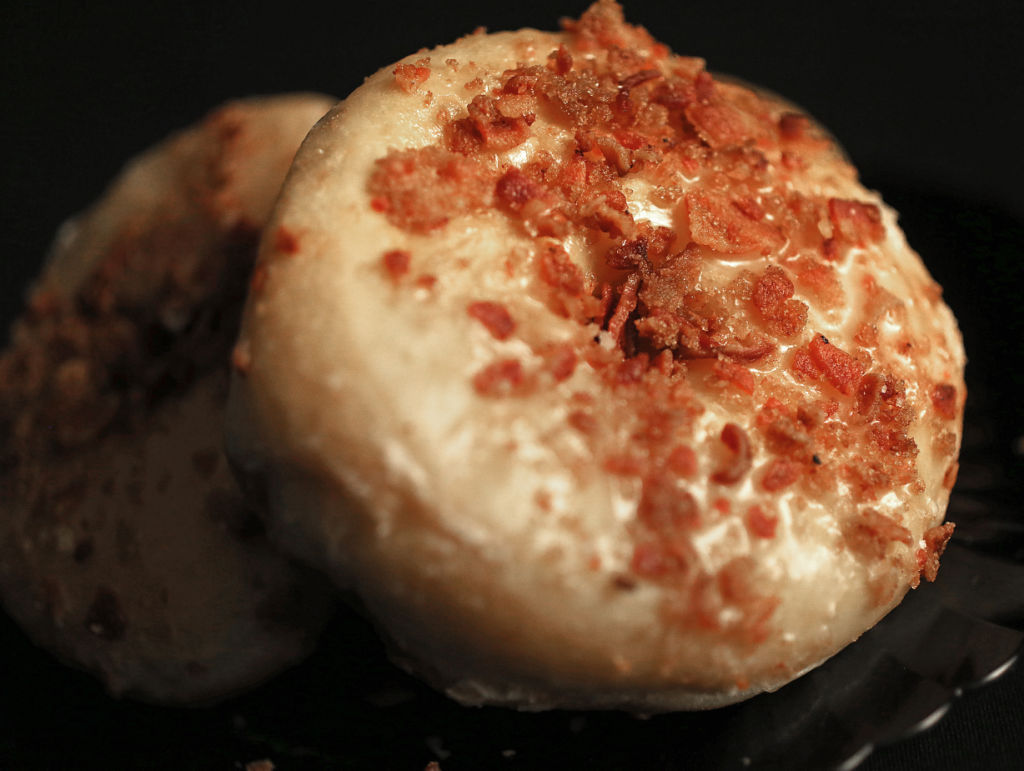 When Bassett Street Brunch Club opened last year, staff thought the restaurant's maple bacon doughnut would be a novelty. "But it ends up being the first one to sell out every day," the restaurant's general manager, Alex Felland, says.

Every once in a while, when a menu item just doesn’t perform the way it should at Bassett Street Brunch Club, the staff has a backup plan to make that dish move.

“We joke and say we should put bacon on it,” said Alex Felland, general manager of the restaurant that opened a year ago Downtown.

Increasingly – and, some would say, overwhelmingly – that seems to have been the food answer for many people in the past five years or so. With the Madison Bacon Fest making its debut Saturday, the breakfast staple is riding a wave so huge it makes pumpkin spice seem like a passing fancy.

Bacon has leaped from the frying pan and onto salads, into Bloody Marys, around sushi and, at the Bassett Street Brunch Club, on top of doughnuts.

In short, bacon is everywhere.

“It’s kind of taken on a life of its own,” said Jeff Sindelar, a UW-Madison and UW-Extension meat specialist.

Saturday’s festival at Alliant Energy Center is a Madison version of the Blue Ribbon Bacon Festival in Des Moines, Iowa, that drew 12,500 last February. A new Bacon, Brew and BBQ Fest in Sun Prairie last summer drew 1,700 people, 40 breweries and 30 restaurants and the next one is scheduled for July 15, 2015.

Beyond trying chefs’ creations, Saturday’s festival also offers a chance to sample various types of bacon. There will also be lectures about bacon, including how to make your own.

“We want people to look at bacon the way people look at craft beer — there’s a whole world of bacon out there,” said Marshall Porter, one of the festival organizers.

Like many things, the bacon frenzy has been fed by two things that have fed many food trends – social media and TV. Yet bacon isn’t new, having been part of Americans’ diet since the first settlers arrived.

Two of the biggest bacon names in Wisconsin have a long history here. In 1924, the Oscar Mayer company introduced the first packaged, sliced bacon and received a U.S. government patent for it. In 1933, R.C. Nueske took the recipe that had traveled from Prussia to Wisconsin with his family and turned it into a business that has created specialty bacon and ham that are popular throughout the state and the U.S.

Nueske’s Applewood Smoked Meats began during the Great Depression, and Megan Dorsch, the company’s marketing manager, saw some similarities from that time that could help explain why the recent bacon craze took off during a down economy.

“It was a small luxury, something people found comforting,” said Dorsch, who has judged several bacon events throughout the U.S. “Even though a premium bacon might be more expensive than a grocery store bacon, people wanted good food.”

The founders of the Blue Ribbon Festival, who also host events in Keystone, Colorado, and Reykjavik, Iceland, weren’t trying to catch a wave, they were just building on their love of bacon. Porter and Brooks Reynolds grew up near each other in Des Moines and ate bacon as an after-school snack. As adults, a group of friends spent a weekend at Porter’s family vacation home and went through so much bacon they called the getaway the Beer and Bacon Festival.

The getaway turned into an annual weekend with a bacon theme, in which it had to be incorporated into everything they ate. Around that time, a newspaper reporter doing a Q&A about entertainment asked Reynolds what Des Moines needed.

“A bacon festival,” was his answer and he and Porter put one together. The first was in 2008, drawing about 200 people to a Des Moines bar. It kept outgrowing its space and the next festival is moving to a place that can accommodate 17,000.

Porter and Reynolds tapped into something that had been brewing for a while. In the ’80s and ’90s, lean meats were dietary and marketing staples. Pork was “the other white meat” and fatty portions, such as the belly, were not valued.

The price of pork bellies — the part of the hog used for bacon — plummeted. A low price and innovations in pre-cooked bacon, Sindelar said, made it an easy extra for fast-food restaurants. Customers responded in a big way.

“Nobody would touch that part of the pig, then people started caring about how food tasted again,” Dorsch said.

Hardee’s loaded up the bacon. So did Wendy’s, which continues to feature a sandwich called the Baconator as well as a Pretzel Bacon Cheeseburger. Smaller and higher-end restaurants added more bacon items and the boom was on.

Matt Pace, chef at Bassett Street Brunch Club, said the flavor touches on a primal taste for something sweet, salty and fatty.

The restaurant mixes sweet, salty and fatty with what has become one of its signature items — a maple bacon doughnut. A doughnut with a maple-flavored glaze is sprinkled with a generous amount of candied bacon pieces.

“We thought the novelty of it would attract people, but it ends up being the first one to sell out every day,” Felland said.

It’s not the only way the restaurant uses bacon. Meatloaf is wrapped in it, salads are sprinkled with it. It’s part of the broth for Ramen noodles and bacon fat is used for refried beans.

“From a culinary standpoint, it plays a very significant role for a lot of flavor,” Pace said.

At Gray’s Tied House in Verona, a bacon-infused vodka is part of the Bloody Mary bar on Sundays and during Badgers games. Sushi Muramoto serves bacon-wrapped Gun Smoke Rolls. The owners of Humble. Sweet and Savory Pies have made a pie they call “The Elvis” that includes peanut butter, bananas and candied bacon.

According to the National Pork Board, between 2001 and 2009, bacon volume in food services grew by almost 25 percent.

All that demand, in combination with a deadly virus that has shrunk the hog supply, has made an economic impact on pork producers.

Since 2010, the price of pork bellies and bacon have both doubled in price per pound, hitting record highs this year. In August, the price of bacon reached a record $6.11 per pound.

“The popularity of bacon is definitely added value for our farmers,” said Tammy Vaassen, director of operations for the Wisconsin Pork Association. “We’ve got lots of bacon lovers out there and while we can capture that, it’s great for our industry.”

Bacon can be a pretty simple product. It is made of pork belly and curing ingredients that include salt, sugar, sodium eyrthorbate and sodium nitrite. That simplicity is starting to generate more interest from people who want to try to make it themselves at home (Morton Salt sells a curing product called Tender Quick).

Sindelar is working with Outagamie County Extension on a new youth bacon project where students learn all about bacon including how to make it, the curing and smoking process, what part of the hog it comes from and how to tell the difference between good bacon and great bacon.

The process is simple, too, Sindelar said. It is made with a small number of ingredients but subtle variations of these and different nuances to the manufacturing process can significantly differentiate one from another.

“It’s really just finding the right combination of salt and sugar and sometimes carefully adding an additional flavoring,” he said.

Differences can result from how long it’s smoked, ranging from an hour to many hours or more; how long it’s cured; added flavors such as maple, honey or a pepper coating; and even what kind of wood is used for the smoking process.

The tried and true uses remain, but sometimes the urge to get creative can leave the basics in the dust.

“Actually the one thing we don’t have on the menu right now is a BLT,” said Pace, the Bassett Street Brunch Club chef. “Go figure.”

What: Madison Bacon Festival. The event includes bacon sampling, restaurants offering bacon-related dishes, a bacon-eating contest and the crowning of a Wisconsin Bacon king and queen.

Cost: There are three levels of pricing for tickets, available online at blueribbonbaconfestival.com. A $30 (plus fees) ticket includes unlimited bacon sampling, a free Coors Light beer, live music and bacon lectures and additional beverages and food available for purchase. A $45 (plus fees) ticket also includes $10 in "Bacon Bucks" for food purchases and a limited-edition commemorative pint glass. Additional food and beverage tickets can be purchased at the event. VIP $75 (plus fees) tickets also include a second beer, a T-shirt, admission an hour earlier and $15 in Bacon Bucks.

Ticket prices will increase by $5 after end-of-day Tuesday and will be limited after that so organizers can estimate food amounts for participating chefs. To find out about tickets later in the week, message Blue Ribbon Bacon Festival via Facebook or via Twitter @BRBaconfest.

The student alleges in a federal lawsuit that district staff and administrators did nothing when told of race-related harassment and sexual assault.

OREGON—On a snowy, snowy night, Jesus called for an angel. Not just any angel, but a very special angel. One with a big heart. One with nothin…

Fact-check: How do Trump's Milwaukee rally statements hold up?

President Donald Trump held a campaign rally Tuesday night in Milwaukee. The Associated Press compares his statements to his record.

From left, UW-Madison students John Baynton, Tony Schmitz, Megan Jass and Katie Schultz slice and package bacon at Bucky's Butchery on Monday. The campus meat processing facility has a retail shop that is open from 11 a.m. to 3 p.m. on Fridays and bacon is one of the most popular items with about 30 pounds a week sold for $5 a pound.

When Bassett Street Brunch Club opened last year, staff thought the restaurant's maple bacon doughnut would be a novelty. "But it ends up being the first one to sell out every day," the restaurant's general manager, Alex Felland, says.